More Delhi and the Road to Jaipur

We arrive in Delhi at 7 pm, one and a half hours late due to an electrical problem on our plane which kept us sitting on the tarmac in Melbourne but I sent a quick email to Trinetra Tours to let them know and our coordinator is waiting for us. When we arrive at the hotel – Justa Residence – we have a shower and go straight to bed so we can be ready for an 8 am start next morning. The irksome things I complained about a month ago at the same hotel have been fixed up. We have been given a different room which has two tea cups (and not one), complimentary biscuits and fruit, a bathmat and correct drainage in the shower. 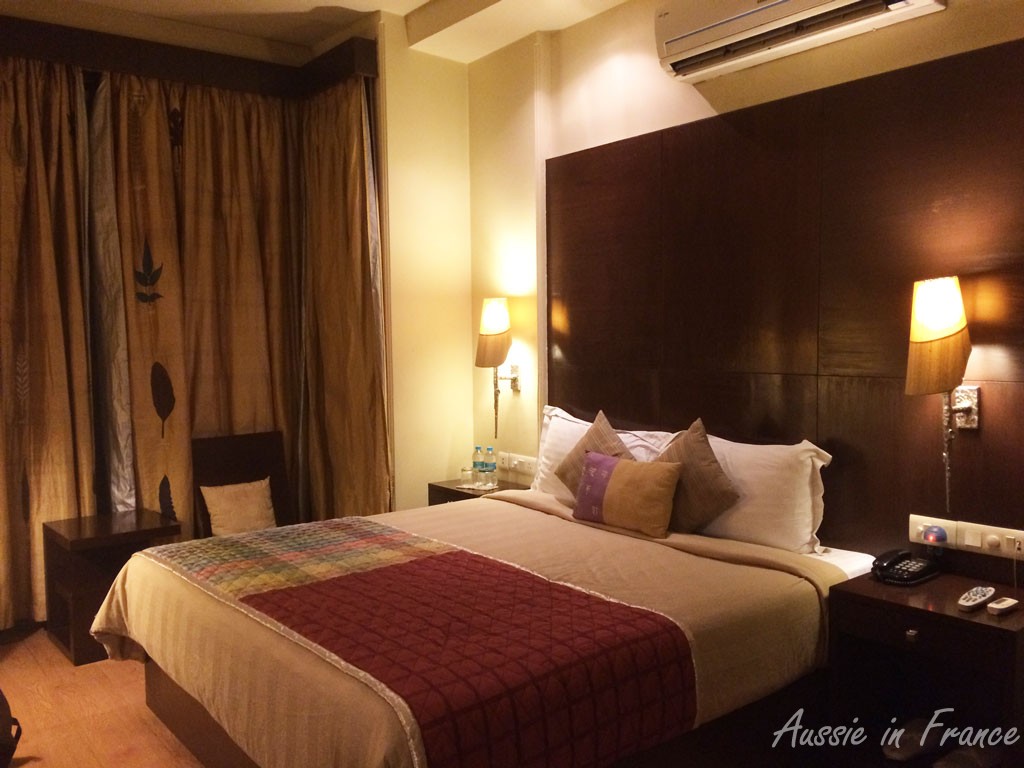 Our room at Justa Residence Hotel

Our chauffeur for the next four days, Rajender Negi, arrives a half an hour late at 8.30 am, along with our French guide, Singh. They were held up by a road accident in which a truck was lying across the road. Considering the traffic here I’m surprised there are not more accidents! However, they had phoned the hotel to tell us they would be late so we weren’t worried. 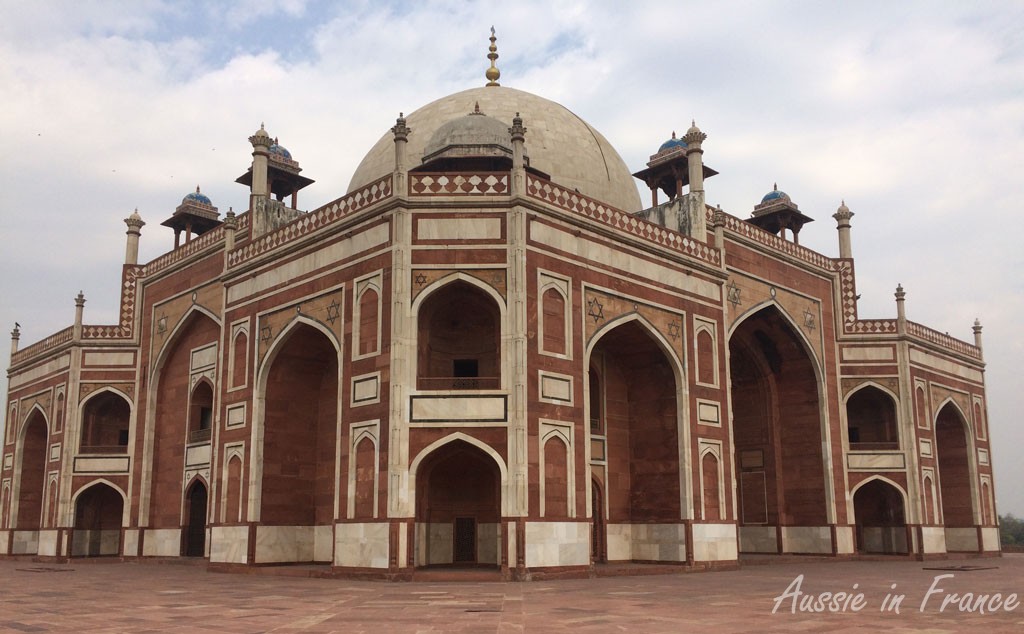 Humayan’s tomb made of red sandstone and marble

The first stop is the tomb of the Mughal Emperor, Humayun, commissioned by his son Akbar in 1569-70. The site is quite majestic and we practically have it to ourselves. It was the first garden-tomb in India and also the first structure to use red sandstone on such a large scale. 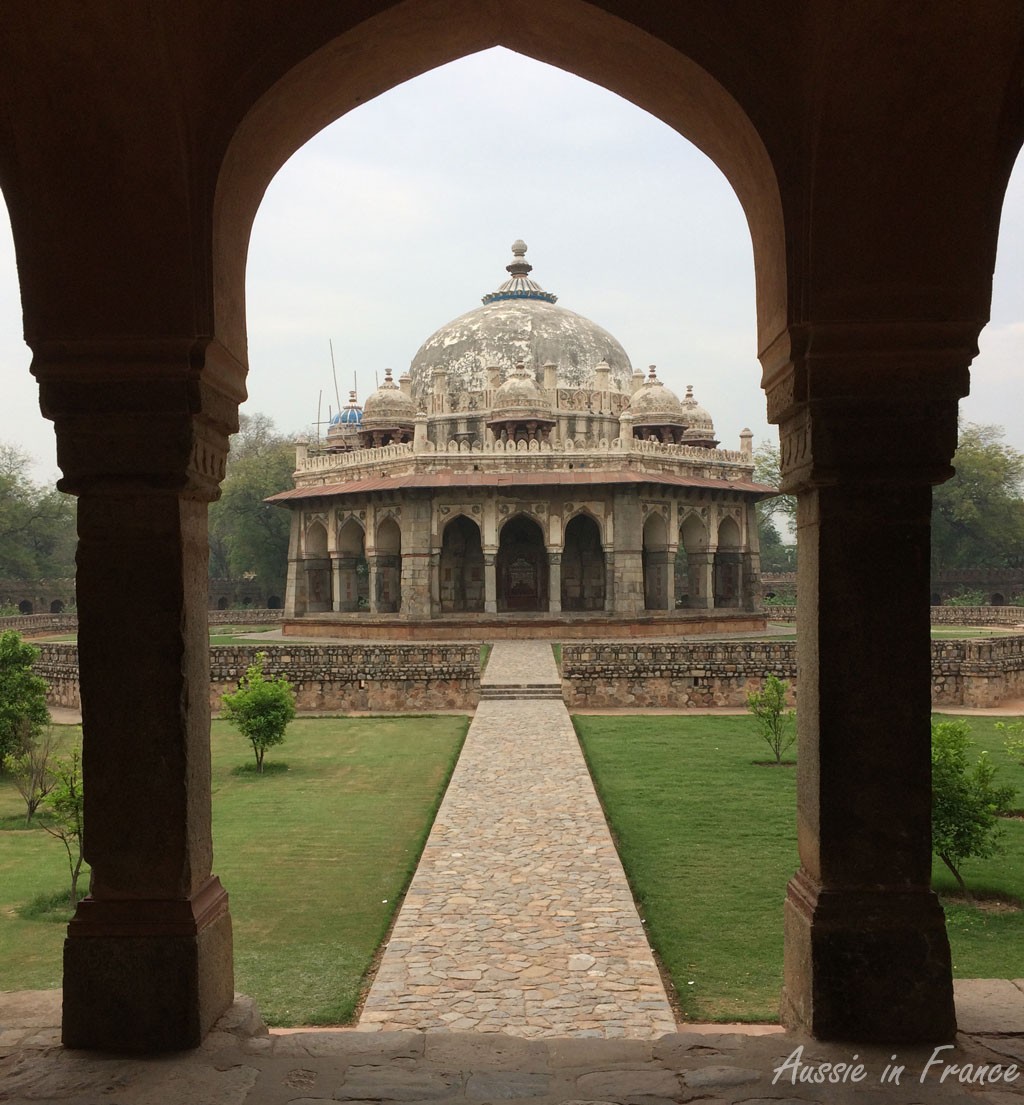 The tomb of Isa Khan Niyazi currently being restored

The tomb is a UNESCO World Heritage site and has been extensively restored. In addition to the main tomb, there are several smaller monuments, one of which, the tomb of Isa Khan Niyazi, was built twenty years earlier. It is wonderful to think that such a large garden exists right in the middle of Delhi. 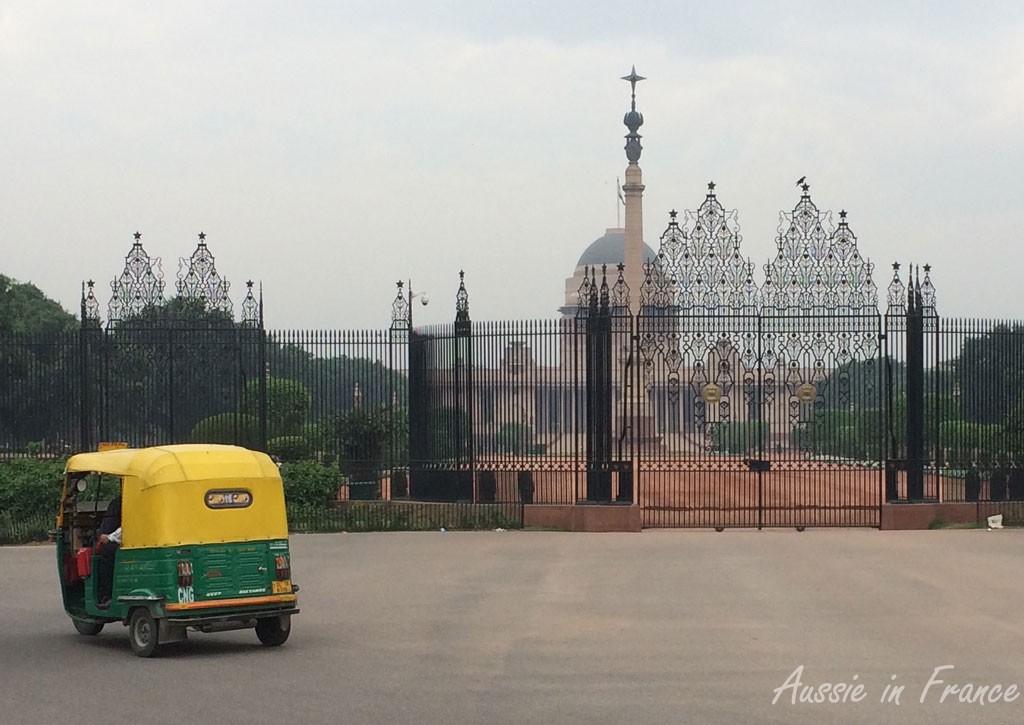 A tuk-tuk in front of the presidential palace

Our next stop is the presidential palace built in 1929 and other government buildings. Yet another side to Delhi that we didn’t see the first time. It also provides the occasion for Singh to explain more about the country’s government bodies. Although I have a little trouble understanding him initially, his French is quite good and he is a willing and knowledgeable communicator, unlike our French guide the first time round. 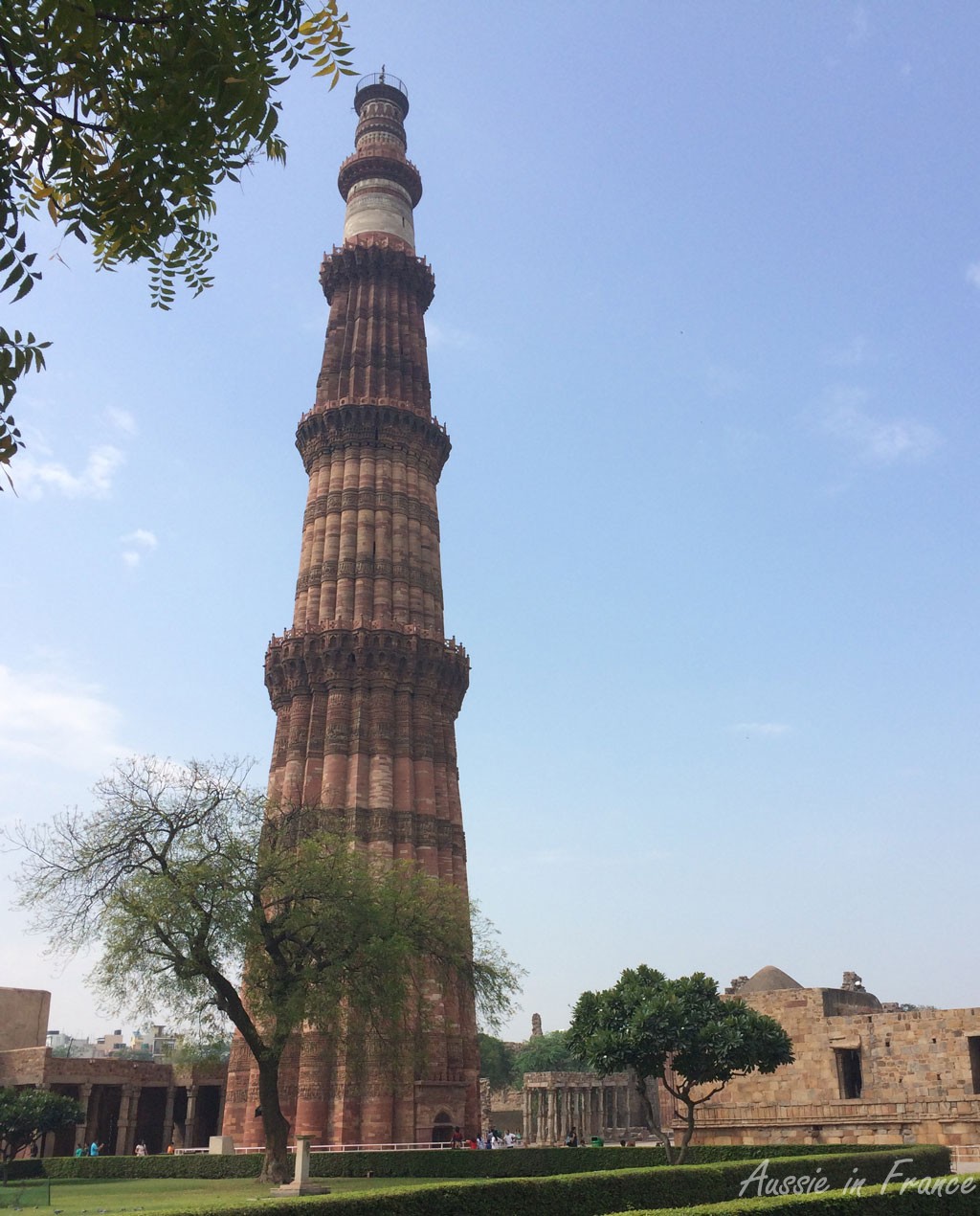 The 72-metre Qtub Minar is next on the list and surprises us by both its size and beauty. Like Humayon’s tomb, there are also several other monuments. Our guide points out the original pillars from the Hindu temple which was partly destroyed to turn it into a Muslim site. 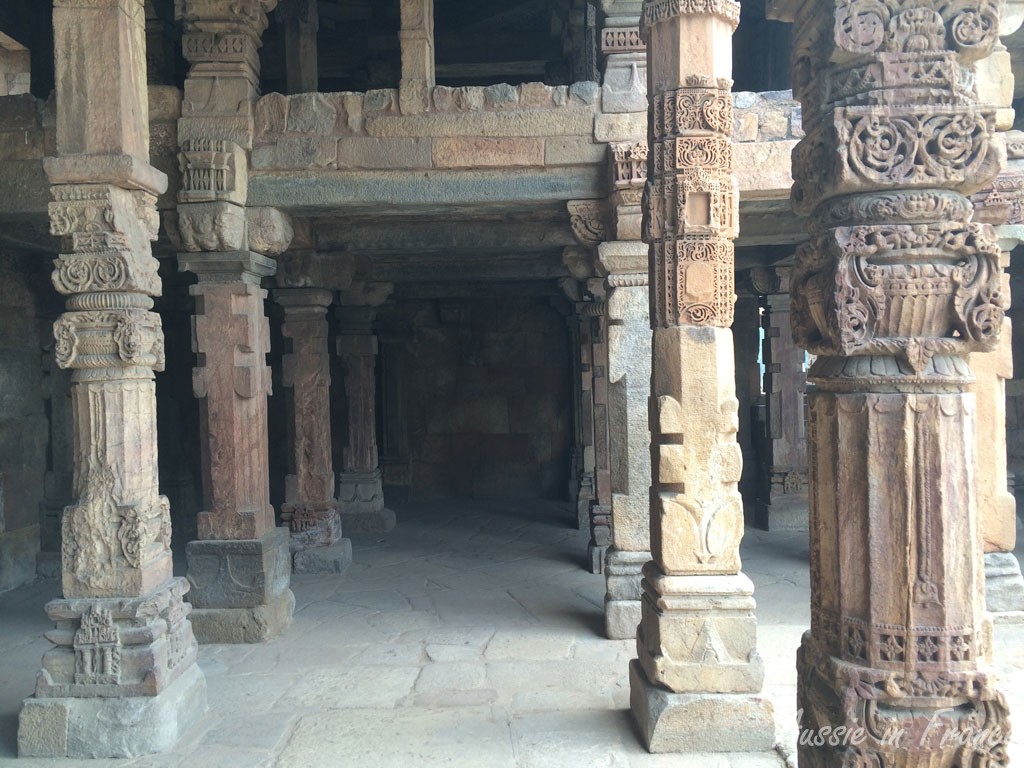 Pillars from the original Hindu temple at Qtub Minar. Depictions of animals in particular have been removed.

More tourists have arrived and everyone is taking photos of themselves, family and friends. I move out of the way for an Indian man to snap his wife and Singh tells me that they want me in the photo. I am surprised. We then have a group photo and they are delighted. 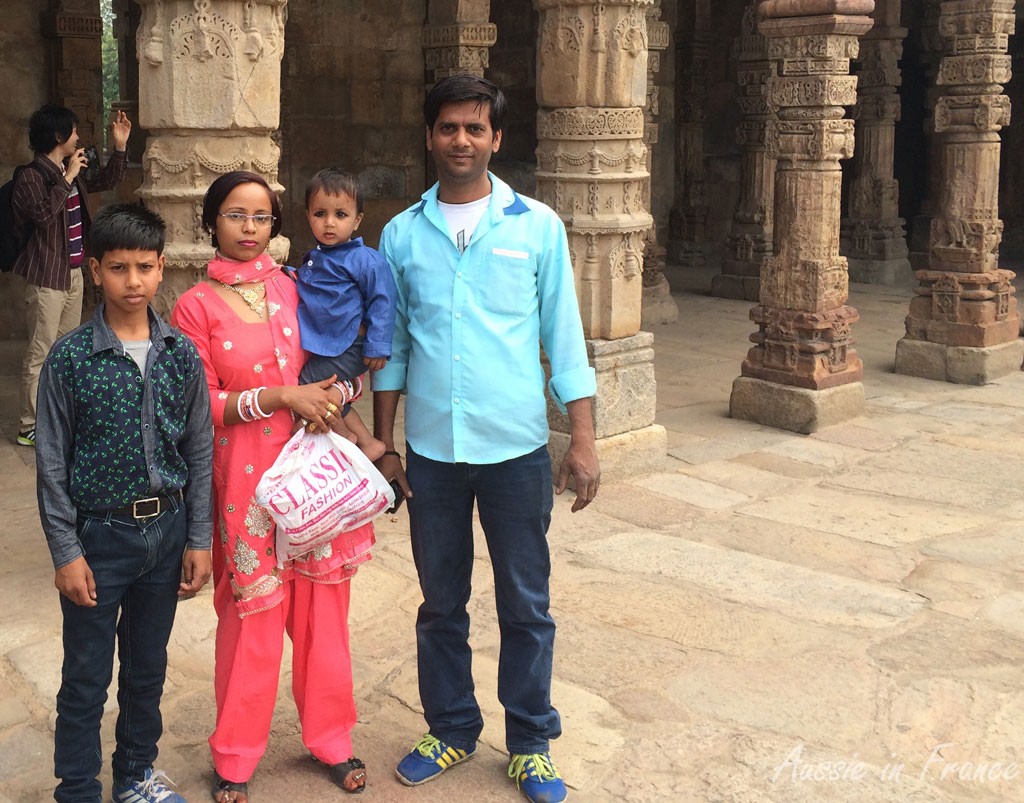 In the middle of the complex is a 7 metre high column called the Iron Pillar weighing 6,000 kg and thought to have been originally erected in Udayagiri by one of the Gupta monarchs in about 400 CE and transported to its current location in 1233 CE. Its surprising corrosion resistance is due to an even layer of crystalline iron hydrogen phosphate forming on the high phosphorus content iron, which serves to protect it from the effects of the local Delhi climate. 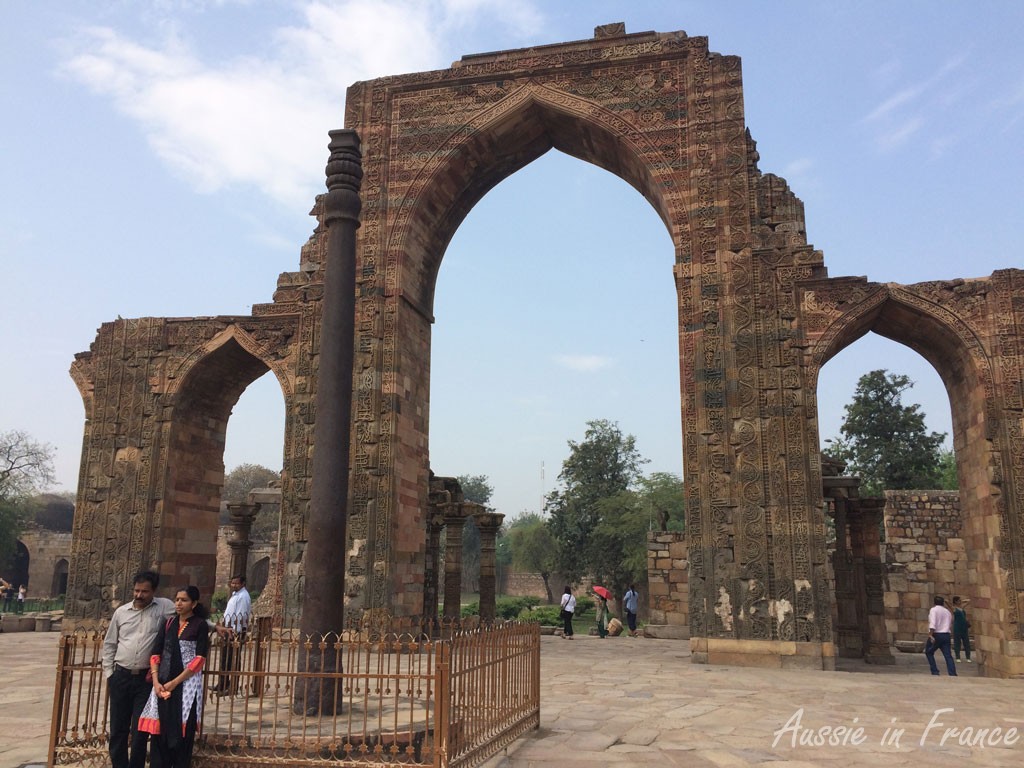 The iron pillar at Qtub Minar

It is now nearly 11 am and Singh takes his leave as we are close to a metro stop and he lives quite a long way away. He has asked us the usual questions about our family situation, children, where we live, etc. and told us about himself. He lives in a village near Jaipur with his wife, two small children (2 and 4) and his mother. As a tourist guide, he only works for 6 months a year, mainly in Delhi, where he shares a flat with other male friends during the season. The rest of the time, he lives in the village and doesn’t work. He is the only breadwinner. 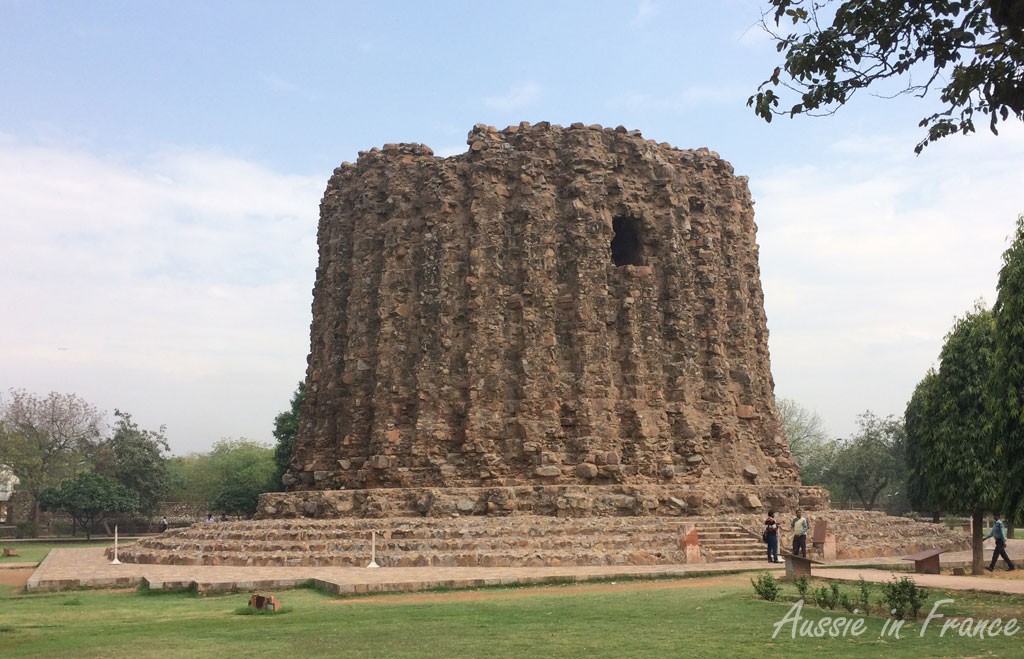 We give him the prescribed tip and off he goes. Now, our driver, Rajender, takes over and asks all the same questions again in English. He comes from Himalaya, as most drivers do, he explains. Because they have a hard life as children, walking 10 km to and from school and carrying heavy loads, they have strong heads and are able to deal with the horrendous traffic. I didn’t think Delhi was very busy the first time but it seems as though the traffic has increased tenfold! Fortunately, Rajender is a good driver. 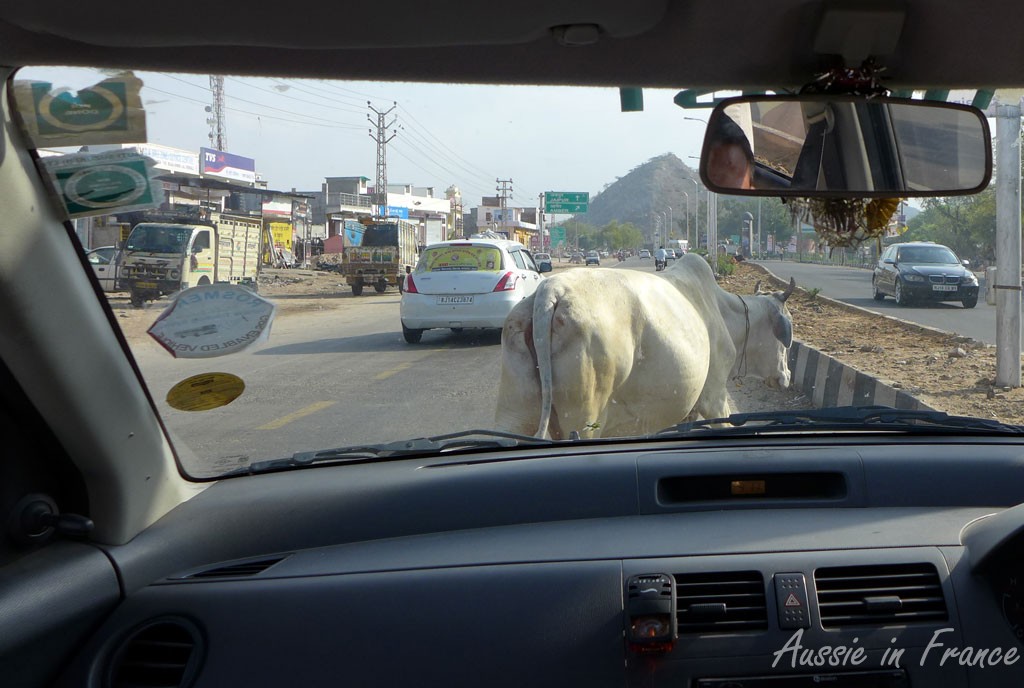 A sacred cow in the middle of the highway

We set off for Jaipur, which is 5 ½ hours away, which seems very strange as there is a new 2 x 3 lane toll road and the distance is only 270 km. We soon discover why. Although trucks are not theoretically supposed to be in the fast lane, they invariably hug the middle of the road, moving into the middle lane if they are forced to do so. They often have a sign saying Blow Horn written on them, sometimes Please blow horn and even No horn. Rajinder says it’s because they listen to loud music so will only move over if you blow the horn. 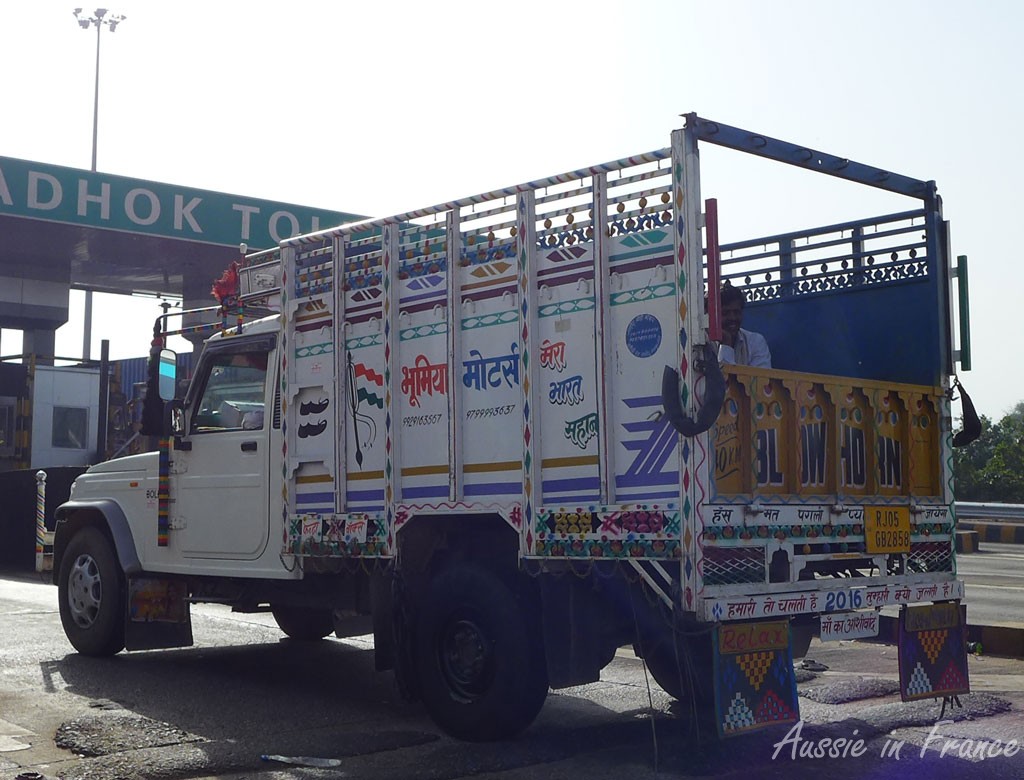 He weaves his way in and out the traffic, which includes every imaginable vehicle, both large and small – cars, buses, tractors, bicycles, tricycles, rickshaws, tuk-tuks, family scooters (older child in front, father, younger child, mother sitting side-saddle), camel and horse-drawn carts and sacred cows which have a special affinity with the middle of the road. We don’t see a single accident, which is really quite extraordinary. We don’t see any women drivers either. If I don’t watch the traffic, I’m not afraid, which is also amazing especially as we often see traffic coming in the wrong direction, but since no one can go very fast, I feel quite safe! I should mention that we have seen a number trucks nose-down in the gutter. 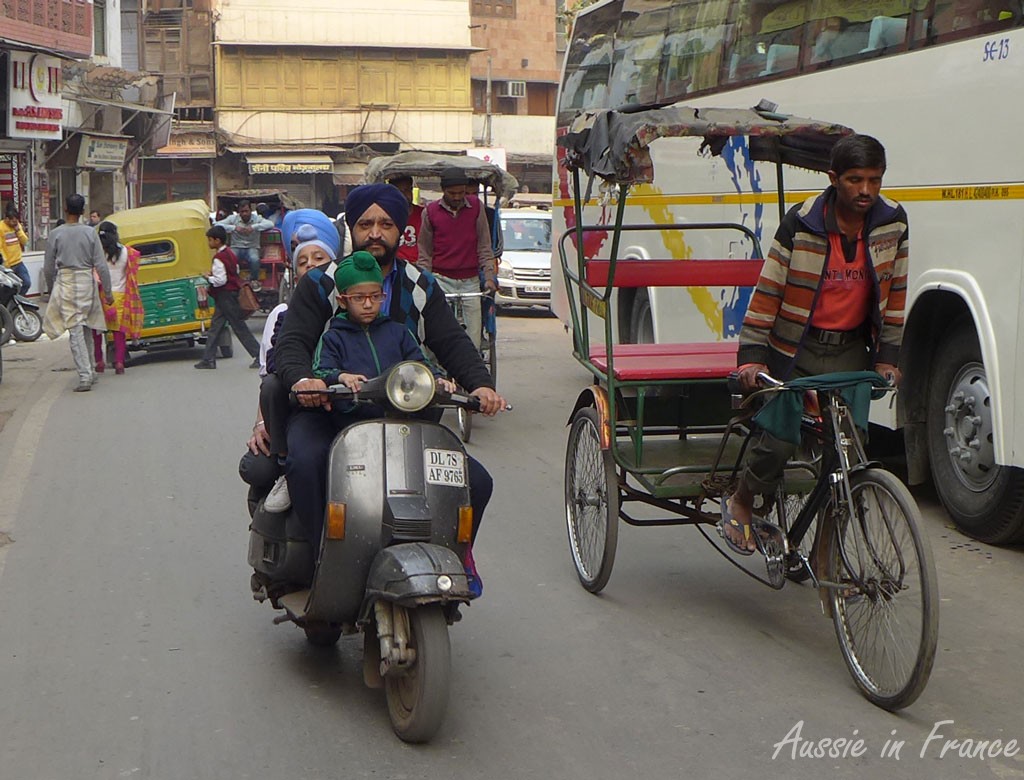 On the way to Jaipur, we go past Cyber City, an enormous complex in Gurgaon, linked to the Delhi metro system. Now we see the skyscrapers we didn’t see in Delhi. They house international companies such as IBM, Samsung, American Express, Deloitte and Google. Residential complexes, often gated, follow one another and we see many advertisements for “green” apartment buildings and public schools which are actually private, saying things such as “if you love your child, send them to our school”. 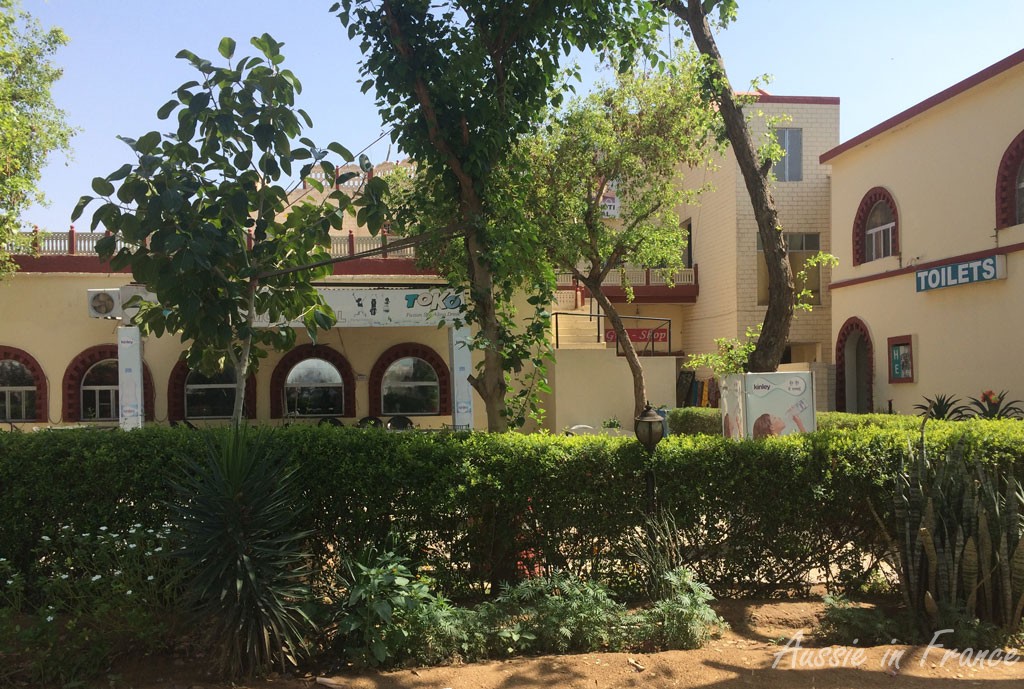 Our roadside restaurant, the Moti Mahal, in Behror

At 1.30 pm, we have covered half the distance to Jaipur, so Rajender suggests we stop for lunch at the Moti Mahal Restaurant in Behror. When we get inside we see it’s a tourist restaurant but at least it’s not a cocktail bar. We choose dal (lentils), a mixed vegetable dish, naan (that delicious oven-baked leavened flat bread), rice and curds. The meal is tasty and not too spicy and only costs 1200 rupees (16 euro) including a bottle of water. We realise that we won’t be having any local experience restaurants but decide it’s just as well – less hassle and no gut problems! 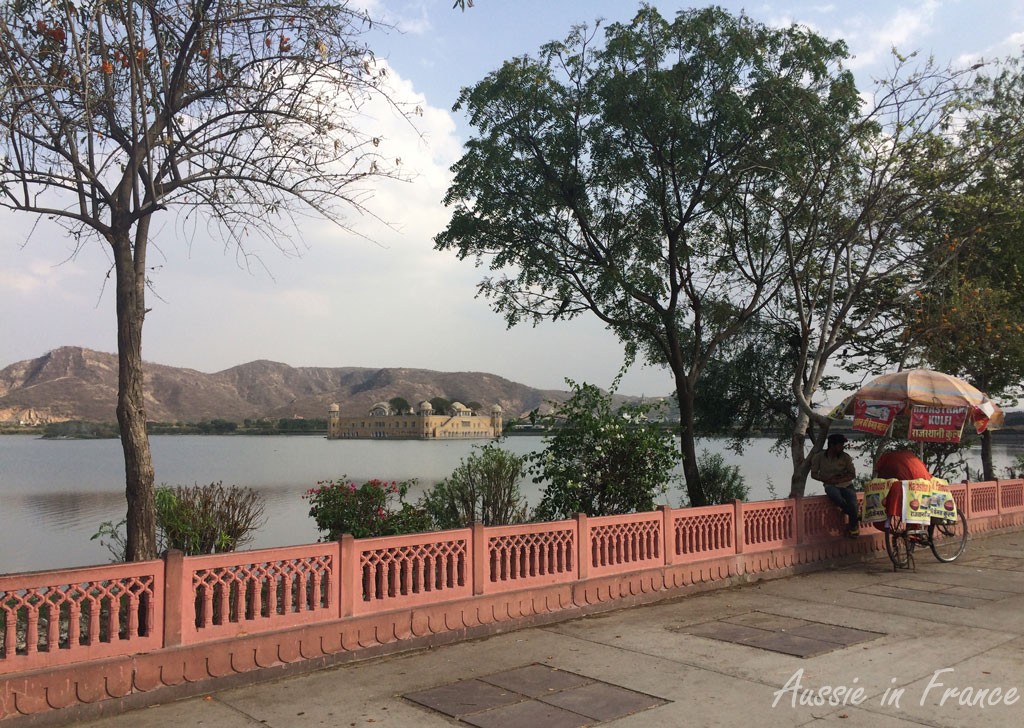 As we approach Jaipur two hours later, we see Amber Fort with its 9 kilometers of ramparts. Rajender then points out the Jal Mahal (meaning “Water Palace”) in the middle of the Man Sagar Lake. It is in total contrast with anything we have seen up until now. I ask to stop for a photo but Rajender tells me it’s scheduled for the next day. I insist, explaining that the light will be no good in the morning. He pulls over with good grace and we clamber over the low stone wall. He gets a nearby vendor to take a photo of the three of us together to put on Facebook! 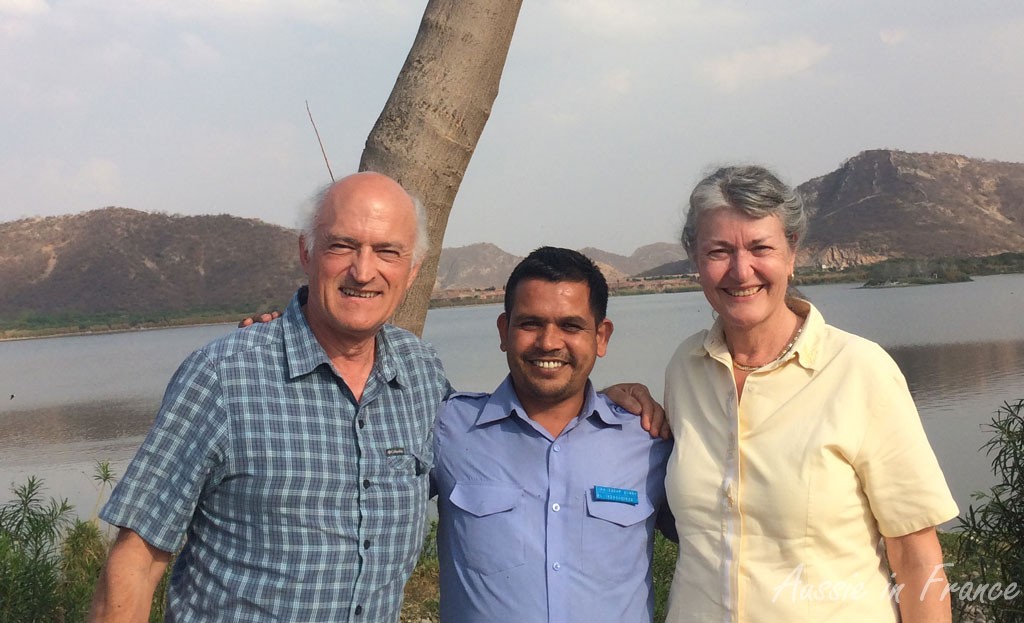 With Rajendar, our guide, in front of the water palace in Jaipur

We continue on to our hotel and are delighted with our first glimpse of Jaipur despite the incredibly dense traffic. The capital of Rajasthan, which currently has a population of over 6 million people, was founded on 18th November 1727 by Maharaja Jai Singh II, the ruler of Amer (Amber) after whom the city is named. He was something of a town planner and consulted several books on architecture and architects while planning the city’s layout. It took four years to complete the major roads, offices and palaces. The city was divided into nine blocks, two of which contained the state buildings and palaces, with the remaining seven allotted to the public. Huge ramparts were built, with access provided by seven fortified gates. 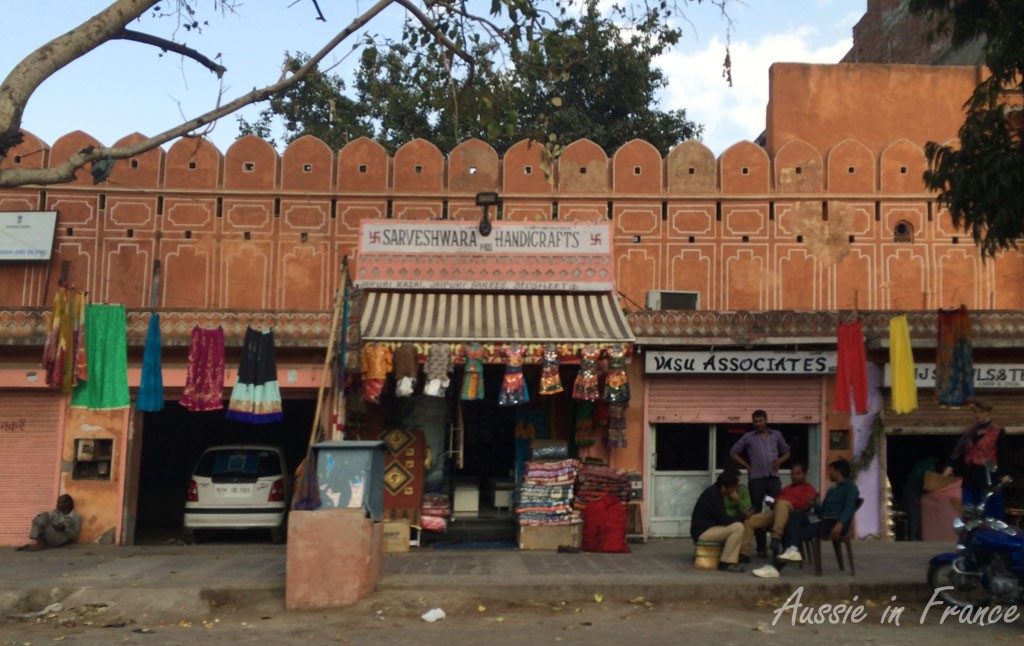 During the rule of Sawai Ram Singh, Jaipur was painted pink to welcome Prince Edward VII and Queen Victoria and it became known as the Pink City of India. We love the result but the traffic is so chaotic that it’s difficult to take any decent photos. A video proves to be the answer.

We arrive at Shahpura House Hotel at 5.30 and it is every bit as lovely as the photos on its website. I later try to understand its history, but to no avail. All I can tell you is that the current owner is Maharaj Surendra Singh, a descendant of the royal family of Shahpura, and that the fusion of historical influences has been preserved in the décor and design: Indo-Saracenic architecture, opulent Mughal interiors, European furniture, and Rajasthani fabrics and design. 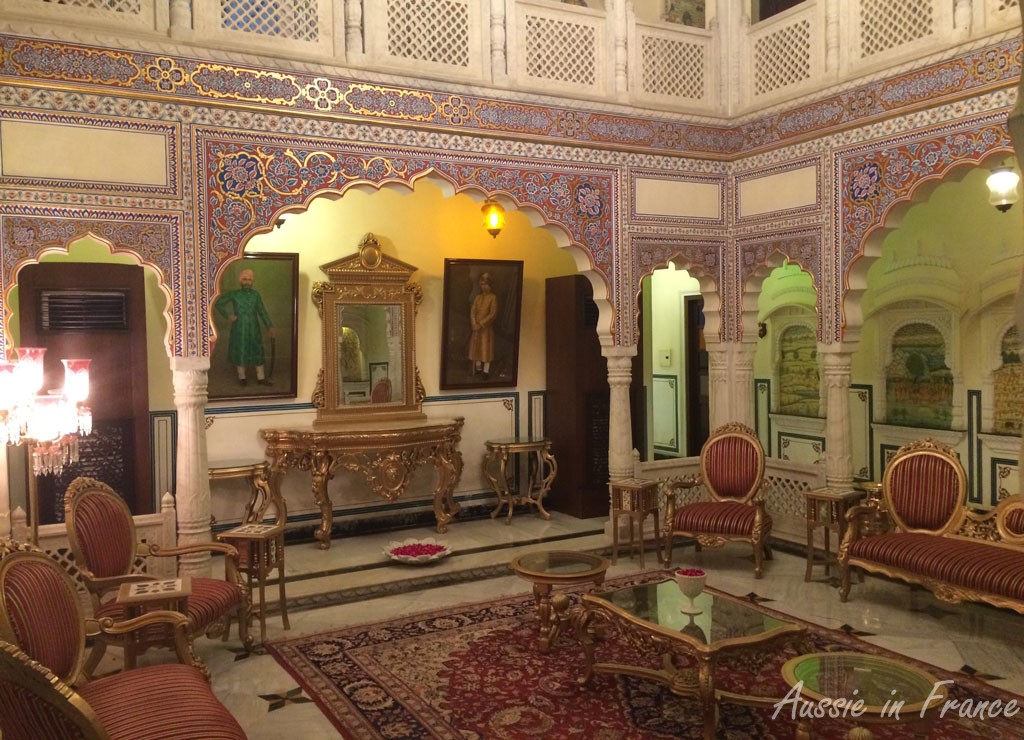 One of the common areas at Shahpura House Hotel

After a refreshing shower, we have a tonic water and crisps on the terrace in front of our bedroom then escape from the mosquitos into our beautifully furnished air-conditioned room. Even the live Indian music in the outdoor restaurant on the terrace below cannot kept us awake once we go to bed. 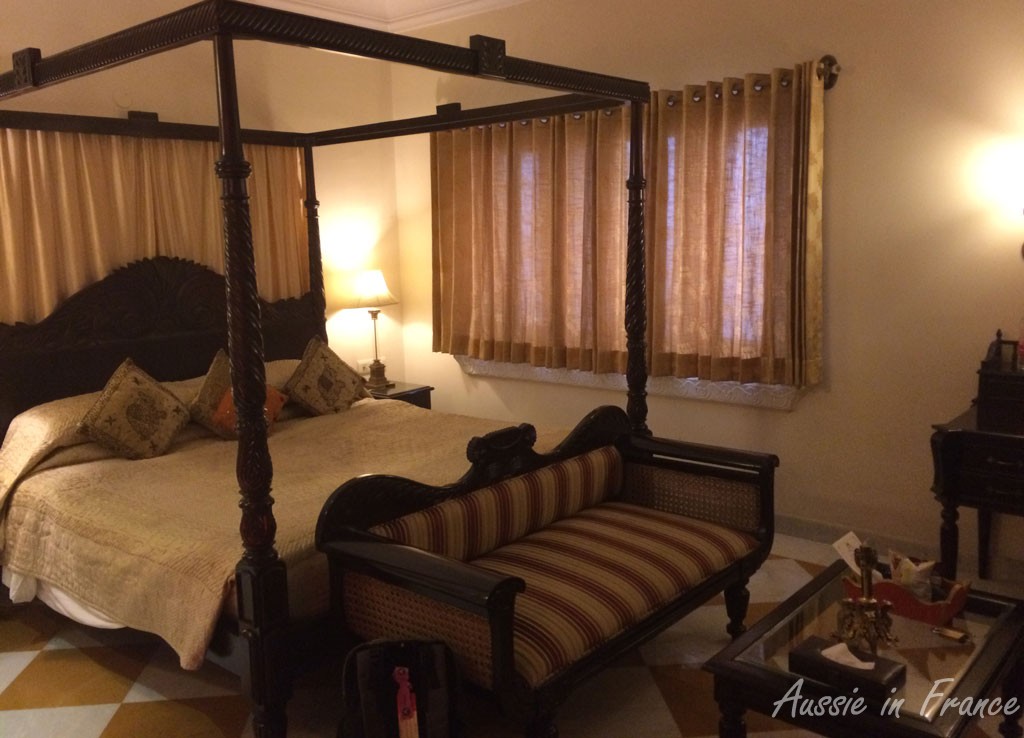 Our bedroom at Shahpura House Hotel

8 Responses to More Delhi and the Road to Jaipur