Real Parisians don’t take the metro. They take the bus. Also, they don’t go out of their arrondissement unless they’re just going to the next one over. And they think the suburbs are the end of the earth. I have a friend who was born in the 17th, went to school in the 17th, went to uni in the 16th (there isn’t one in the 17th), bought a flat in the 17th and set up her business in the 17th. She moved recently – to another street in the 17th. One day, I talked her into coming to the 1st for lunch and she was surprised she survived the journey!  Now she comes more often … 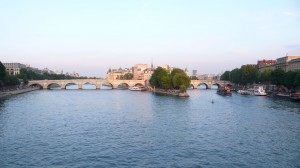 Ile-de-la-Cité with Notre Dame: am I looking upstream or downstream?

You are only Parisian, of course, if you live inside the ring road that contains all the arrondissements, which, as you may have noticed, are arranged in a clockwise spiral, starting with 1 at Palais Royal and ending with 20 over near Père Lachaise cemetery. What you may not know is that the street numbers always start at the Seine. Take rue du Louvre, for instance, which runs perpendicular to the Seine. N° 1 is next to the river and the numbers climb as you move north. Now what happens, you may ask, if the street is parallel to the Seine? Ah, ha! It’s in the direction of the current no less.  If I stand on the Pont des Arts, Notre Dame is upstream and the Eiffel Tower is downstream. On Quai de la Mégisserie (you know, the street on the Right Bank where all the pet shops and plant shops are), the higher numbers are at Pont Neuf and the lower numbers at Châtelet. I won’t even pretend that I remember that. I have to get Relationnel to explain it to me all over again each time. 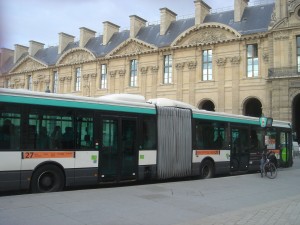 The 27 bus outside the Louvre

The articulated buses are fun and can obviously contain more people. We take one from Palais Royal (27) that goes past the Glass Pyramid at the Louvre (great view with the Louvre on one side and the Tuileries Gardens and Arc of Triumph on the other) and across Pont Neuf into the Latin Quarter. I can take the 72 in front of the Louvre and go down to Place de la Concorde, then right along the river to the Eiffel Tower, for example. Sometimes, though, when there’s not much traffic, the drivers go tearing along at the most incredible pace and everyone holds on for dear life. It’s a wonder they don’t hit someone.

Leonardo, who’s now been in Sydney for 3 weeks, is NOT impressed with the public transport there. Apart from its chronic unreliability, he says that the bus seats are too close together and that he can’t actually fit his legs in front of him. He’s fairly tall – 1 m 86 – but so are a lot of other Australians! I asked our Aussie exchange student about it (he’s tall too) and he said it’s because there is a lot more standing room in Parisian buses and not so many seats so they can give you more room for your legs!

The biggest advantage of buses compared with the metro of course is that you get to see where you’re going and I think I could safely say that Paris has one of the highest numbers of monuments per square kilometers in the world. The downside is that despite the many bus lanes you’re never sure you’ll be on time because of the traffic, not to mention an (occasional) demonstration that sends the bus on an unexpected route!

5 Responses to Buses in Paris