Buskers in Paris and Prague 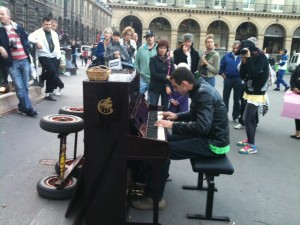 When I came up out of an overcrowded metro the other day onto Place de Valois at 6.30 pm (now why didn’t I take the bus like a real Parisian? because there’s no direct bus to uni so I’d have to take two), there was this fellow playing the piano. Isn’t that amazing? A real piano! Not like Vienna, which I used to think was the music capital before I went there. Not a single busker the whole time we were there. Lots of expensive concerts, ALL playing medleys and there’s nothing I dislike more. I like to choose the music I’m going to listen to in a concert hall.

Prague on the other hand was full of musicians. Everywhere you turned there was a band 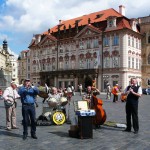 or singers. It was wonderful! Prague remains one of my favourite destinations, despite the food, but the Italian restaurants saved the day. What I particularly like is being able to go right down to the river banks to have a drink or a meal. You can’t do that in Paris though they’re in the process of doing something about it. All sorts of things are in the making for the banks of the Seine. 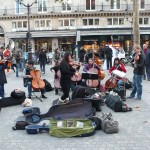 Paris has a good share of buskers. You often find them in the metro, though the quality of their performance varies. Around our area there are a few regular musicians. Often on a Saturday afternoon around 3, a full orchestra comes to the Place Colette in front of the Comédie Française. They appear to be eastern European and probably students as they change from one year to the next. If you get there at the right time, you can sit and have a drink on the terrace of the Le Nemours. They have their favourites of course (medleys are fine outdoors) and cater to the tourists but they usually play pretty well. On Sunday there was a very enthusiastic brass band on Place du Palais Royal which made a change. 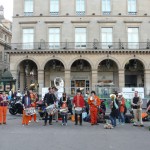 We used to have a very mournful saxophonist over the other side of the Palais Royal gardens. He always played the same thing and it used to drive me spare. So one day I went to see him to ask if he could play something else. He turned out to be a Pom and told me regretfully that he only knew one tune. Fortunately the weather improved and he took his saxophone somewhere else. Another regular on a Sunday afternoon is an opera singer down near the music box shop. She draws a huge crowd.

A long long time ago, when we lived in the suburbs (almost seems another lifetime now), Black Cat and I used to play the piano and Leonardo played the clarinette. I used to hold musical afternoons with the neighbours. We had a cello, a violin, another clarinette, some other pianists and a singer, plus a few triangles and other things of that ilk. But any ability to play has long since left me I’m afraid. I couldn’t even remember where middle C was recently when I had the piano tuned. But now that we have our Aussie exchange student, Brainy Pianist, we have our own private concert before dinner on a Thursday. I love it!

4 Responses to Buskers in Paris and Prague