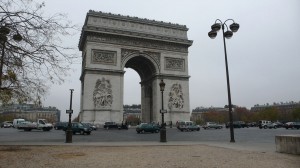 One thing I won’t miss when we move to Blois in 2 ½ years time is Parisian traffic. Not that I mind driving in Paris. When all’s said and done I think it’s pretty organised despite appearances to the contrary. The people know what they’re doing. They may not be particularly polite but it works and they don’t blow their horns much either. What you can’t do is hesitate. As you’re charging across Place de l’Etoile with its 12 avenues (no one calls it Place Charles de Gaulle by the way, just as they always call the airport Roissy), you just have keep your eyes on the right and judge the speed of the cars and you’ll have no problem. But if you don’t know exactly where you’re going to get off, it’s better to take the outer circle around the Arc de Triomphe.  It may take longer, because you’ll have to wait for the lights every time, but it’s less stressful when you’re a beginner. That’s what I did until I accidentally got onto the Place itself.

I love taking my Aussie visitors there. I remember Paul Casita from Townsville. I could feel him cringing at my side in terreur (the passenger on the right often feels more vulnerable I must admit) but he was determined to give it a try himself. So he went and sat in a café up the top end of the Champs Elysées (pronounced shonz-elizay by the way) and watched the people go by. When he saw a little old lady whizz up Avenue Kleber, shoot across half the Place at breaknecking speed in virtually a straight line and zip off down Avenue McMahon on the other side without turning a hair, he decided he could do it too. And he survived! 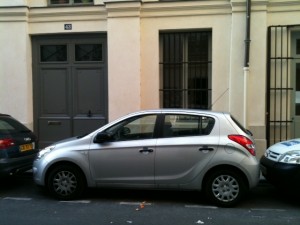 And it’s not the street parking that’s really a problem. Ever noticed how close the cars get to each other when they parallel park? Well, that’s what bumper bars are for. You gently nudge the car in front (no one puts their hand brake on unless they’re on a slope) and then the car behind as you worm your way in. Just leave 5 centimeters on either side and you’ll be fine. The funny thing is that parking is largely ignored when they teach you to drive. I got Black Cat to spend hours on a vacant parking lot during weekends so she could learn how to do it properly. It paid off. She can park with the best of them. 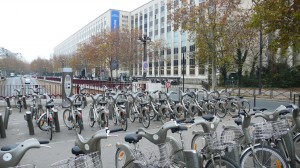 What I don’t like is the number of cars on the road. The Greenies have been trying to do something about it, with dedicated bus lanes, Vélib’ bikes (you know, the ones they’ve stupidly put in Brisbane) and soon Autolib’ cars (coming on 5th December). The trouble is that it’s just made more traffic jams because there’s one lane less for the cars on most of the main avenues. The people like me who are going to obstinately drive their car when they go outside the city centre certainly don’t rent Vélibs and Autolibs. They’re used by people who would have taken the bus or the metro or the train. Admittedly I don’t drive to uni at Porte Dauphine any more, even though I have free underground parking at the other end. The trip back down the Champs Elysées  (shonz-elizay, remember) at 6 pm can be dauntingly slow and you have to keep your eyes peeled for the tourists who stand in the middle of the road taking photos of each other with the Arc de Triomphe behind them.

So, just remember, the clue to driving in Paris is knowing where you’re going. So bring your Tom-Tom!

This entry was posted in French customs, Paris and tagged Champs Elysées, driving in Paris, French drivers, parking in Paris. Bookmark the permalink.

9 Responses to Driving in Paris