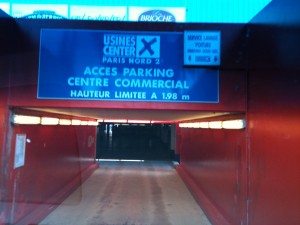 Saturday was satisfying if not exciting. We went to Usine Center in the north of Paris (on the way to Charles de Gaulle Airport) and I was able to cross quite a few things off my never-ending list of things to buy for the gîte in Blois. I first learnt about outlet stores many years ago when doing a translation on McArthur Glen in Troyes, a historial city about 2 hours south-east of Paris.  I then learnt there is another big outlet centre in the area called Marques Avenues (marque = brand). There is also one in Saint-Denis in Greater Paris. These are proper stores with last year’s fashion, kitchen and dining ware at bargain prices.  Even cheaper during the sales of course when they’re crowded. 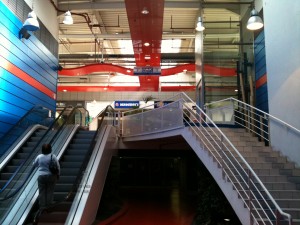 The goods displayed on hangers and shelves just like anywhere else so you don’t have to scrabble around to find things. They often have special offers as well. In the first store we went to – Sym, a brand of women’s clothing – where the pants were already reduced from 89 to 59 euros, there was a further 30% if you bought more than 2 items, bringing the price down to 40 euros. I didn’t have trouble buying 3 pairs as they have a wide variety of styles and colours, though not a lot in my size which, unfortunately, is the most popular! 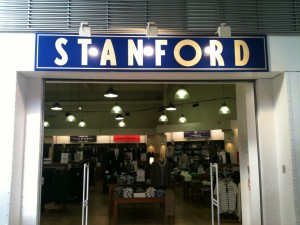 We then went to another shop where I found bedspreads, table runners and tablecloths for about half the price I would have paid in Galeries Lafayette. Also, I found the colours I wanted – I had had no success whatsoever in the Paris stores where white, beige and taupe (a sort of mushroom colour) are all you can find. these days. I picked up a couple of kitchen items in another shop, then we had lunch. We usually eat at a chain called Oh ! Poivrier but they weren’t offering anything very exciting. 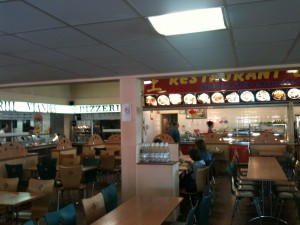 We ended up in the French version of a food court, but it was mostly  fast food (Chinese, pizza, couscous, harmburger and grill) so I ended up eating entrecôte (fairly safe!) with French beans straight out of the tin. Relationnel had some rather unappetising French fries with his. The girl at the coffee bar had run out of milk so I had expresso instead of cappuccino.  And to think we were avoiding the Ikea cafeteria!

Before going to Ikea,  just a couple of minutes away, where we picked up various missing pieces from the time before. we went to the DIY chain Castorama. I at last found some bedside lamps.  I was beginning to get desperate because everywhere I’ve looked (including the big department stores), I haven’t been able to find anything I like. I’m still not entirely satisfied, but at least they are neutral and will do until I find something more to my liking. We picked up a few more things such as a new shower rose for the upstairs bathroom and some rendering to redo the wall where Relationnel drilled the hole in the downstairs bathroom (I’ll tell you about that story another time). 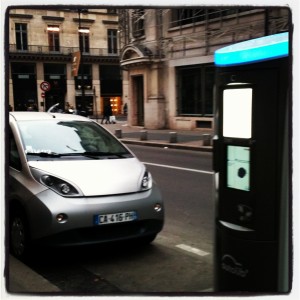 The next item on the list was a bedbase. We inherited a matttess in good condition, but of an unusual size – 120 cm – and have been looking for a base for the spare room. Our favourite second-hand website leboncoin.com came to the rescue once again. The owner lives on the second floor, up a narrow stairase, in a tiny street in the 3rd, with no possibility of parking close by. We organised the roof rack beforehand and I unwittingly commandeered a young man walking down the street (I thought he was with the seller!) to help me carry down the base so we managed to put it on the roof and drive away without getting a fine (we happened to to be in an Auto’lib parking lot).

I’m delighted because I’ve at last taken care of the most difficult things on the list.

5 Responses to Outlet Stores in Paris