Posted on November 2, 2011 by Rosemary Kneipp 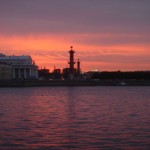 Sunset over the Volga

I really love the long summer days in Europe when it doesn’t get dark until 11 pm. Of course the midnight sun is even better. We went to Saint Petersburg a few years ago in July and it was quite magic to actually watch the sun set at midnight. The problem is that on the last Saturday of October, we have to put our clocks back again and it’s so hard to have night suddenly fall at 6 pm even if it’s lighter in the morning. It completely upsets my biological clock and I’m tired for days on end.

Talking about time, that reminds me of another difference between France and Australia. When I was first invited to dinner here, I used to turn up on the dot in good Australian style. However, I soon realised that no one ever seemed ready when I arrived – they even seemed quite surprised to see me – and they certainly didn’t ever turn up on time when I invited them.  It has now been explained to me that if you’re invited at 8, you must get there at 8.20 at the earliest and 8.40 at the latest! 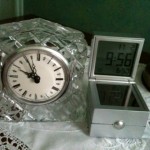 My own relationship to time is somewhat rigid I must confess. I was brought up by a father who was always on time and a mother who was chronically late – she would have done very well in France.  Relationnel is exactly the same. He doesn’t even wear a watch on weekends. I know why people are late of course. I’ve had time to study it over the years. They always think they can do one more thing before they go, such as shine their shoes or send an email (typing with just two fingers of course), take the rubbish out (not that I really mind, that is one job I am allergic to), while people who are on time know they can’t. It used to exasperate me terribly with Relationnel because there are some things where you need to be on time such as movies and planes.  One day he told me “Je ne suis pas à une heure près” which roughly translates as “give or take an hour”. Five minutes, OK, even ten minutes, but an HOUR? After that I realised that I would have to change my way of thinking altogether.

Among English speakers, we always check when giving a time, “Do you mean French time or English time ?” It’s safer !

This entry was posted in French customs. Bookmark the permalink.