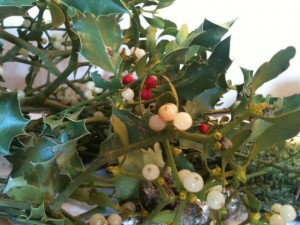 I know it’s supposed to be holly and ivy though I don’t know why because most of the ivy – well, the Viriginia creeper anyway – loses its leaves around here in winter. Our holly and mistletoe come from Normandy. We had a lot of problems finding holly with red berries this time but the mistletoe, which is a parasite of course, had grown lower on the apple trees so Relationnel didn’t have to stretch his arms as much! 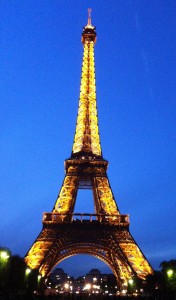 When I was a child, we used to buy real holly (houx) from David Jones at Christmas time but I’d never seen mistletoe (gui) until I came to France and discovered that it grows in large bunches that are particularly obvious when the host tree loses its leaves.

The only problem with mistletoe is that its sticky little white berries keep falling off so I’m keeping the New Year branch we’re supposed to kiss under in a bag until the day. Relationnel is on call this year so we won’t be able to join the throngs on New Year’s Eve on the Pont des Arts which has a perfect view of the Eiffel Tower which shimmers and shakes at midnight. We can actually see it from our window but last year low cloud obscured it, which was very sad. I had to use my watch to check the time. 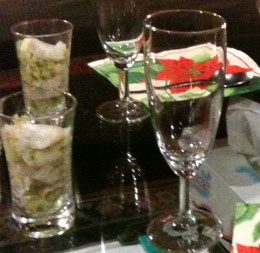 I’m starting to think about our New Year’s Eve feast for two, particularly as it could be interrupted any time if Relationnel is called out. One year we made this terribly complicated capon dish that I got out of “Simply French” by Patricia Wells, but considering the hours it took to make, I found the result very disappointing. So now I make much simpler recipes such as pan-fried foie gras and verrines with lots of interesting bits and pieces that I can vary according to whim and the ingredients I have at home. Far more satisfying.

Verrines – from verre meaning glass and modelled on the word terrine which comes from terre or clay – are shot glasses in various shapes and sizes that have become very popular in France over the last few years for serving individual starters and desserts. I love making them because you can be very inventive and they can be prepared ahead of time. The idea is to have different layers and colours so that they look attractive from the outside. 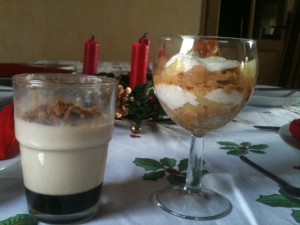 At Christmas we had two verrines for starters: slices of sea scallops alternating with beds of leeks and eggplant purée topped with ricotta and walnuts; and two for dessert: pannacotta on a layer of coffee jelly topped with crumbled brown sugar biscuits from Belgium called speculoos and slightly cooked pear pieces alternating with fromage blanc and candied ginger. Since I had only taken along two sets of verrines, I used ordinary glasses for the desserts.

Now I wonder what I’ll put in them this year?

This entry was posted in Food, France, French customs, Paris. Bookmark the permalink.

3 Responses to Holly and Mistletoe