Posted on January 1, 2012 by Rosemary Kneipp 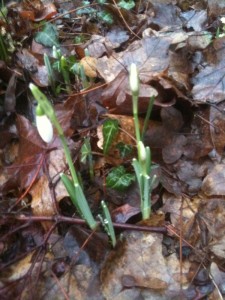 These are the first snowdrops in the private woods behind the house we are buying in Blois, La Closerie Falaiseau. The photo was sent to us by the current owners. That, of course, is our big adventure for 2012. On 17th March, the house will be ours. We’re planning to spend Easter there with the family.

As we watched the Eiffel Tower shimmer and shake from our window in Paris at midnight and drank our champagne, we imagined ourselves at the same time the next year in the Closerie next to a roaring fire, snug inside our four-hundred-year-old walls! 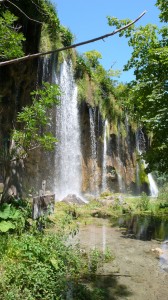 This has been an eventful year: a week in Seville in February and a week in Orthez in the Pyrenees in April, taking up again with my very first friend in France, Elizabeth. Relationnel went surf fishing for 10 days in May in Normandy, where I joined him both weekends to cycle. We then spent five days cycling in the Loire Valley in June. In the summer, we took four weeks off and drove to Eastern Europe, visiting (and cycling) in no less than nine countries (France, Italy, Croatia, Bosnia Herzogovina, Slovenia, Austria, Liechtenstein, Germany and Switzerland), speaking four languages (French, Italian, Croatian and German), dealing in three currencies (euros, Liechtenstein marks and Swiss marks) and clocking up more than 5,000 kilometers. Highlights included the incredible Plitvice lakes and falls. 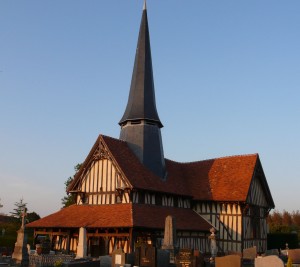 Relationnel then spent a week trekking in the Alps in September before we both went to eastern Champagne to cycle around the largest man-made lake in Europe and visit the eleven half-timbered churches in the region. In October, Relationnel turned sixty and Leonardo decided to pull up his roots and go to Australia to live and work, helping me to set up the blog before he left.

Relationnel and I then went went to the Loire Valley for a few days to start looking for a place to live when Relationnel retires in June 2014.  We fell hopelessly in love with the very first house we visited, built in 1584. Who could resist? Since then, we seem to be caught up in a whirlwind. 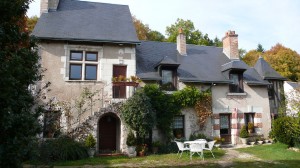 Today, as we ate our oysters on Sunday, we talked about everything we need to do. It’s a little overwhelming to say the least. We want to divide La Closerie in two and rent out (or exchange) the ground floor. Once he retires, Relationnel is going to completely renovate the “Little House” next door which is part of the sale so that we can use it as a short-term holiday rental and invite friends to visit. This means furnishing La Closerie (dépôt-vente, here I come!), setting up a website and organising rental.

This year, we’ll also be going to Australia in September/October where I’ll be organising a big family reunion on my father’s side in Armidale (there are 39 cousins in my generation and 54 in the next generation!), the first in 50 years, and spending two weeks in Tasmania (on a home exchange!) plus a couple of weekends in Sydney and Brisbane. We hope to organise other home exchanges in Europe during the year.

I’m also giving up my university teaching in June after 16 years.  I’ve loved teaching and gained many friends among my graduates over the years, but I feel it’s time to move on to other things.

And, of course, I’ll be continuing my blog. Thank you to all my faithful readers for your encouragement.  Bonne lecture, as they say in French, for the year to come!