I am not a real Parisienne 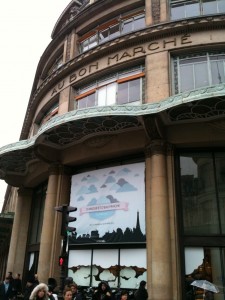 Le Bon Marché founded in 1838 by the Videau brothers

Today, it was proved, once and for all, that I am not a real Parisienne. Primo (as the French say), I am not a shopper. Secundo, I went into Le Bon Marché department store in the chic 7th arrondissement for the first time and had never heard of 90% of the brand names in the women’s fashion department. Tertio (that’s even more suave), I took the bus home in the wrong direction. And worse, I asked the lady next to me which direction it was going in and STILL got it wrong. I obviously didn’t realise my mistake until I looked up and saw the Montparnasse Tower. I got out, crossed the road and missed the right bus by about 1 minute. Sigh. I cheered myself up by using my Mobiletag iPhone app to see when the next bus was coming. 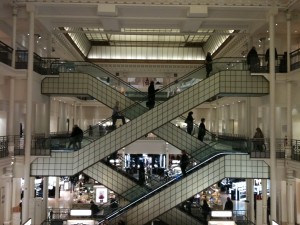 I’ve thought about the shopping thing quite a lot and have come to the conclusion that it skips a generation. My mother adored shopping and Black Cat thrives on it as well. I get bored after I’ve looked at a couple of racks of clothes and trying on two items is about my maximum for the day. I’m always hot in the shop and to try something on you have to peel off endless layers in tiny cubicles that you can hardly turn around in and that never have enough hooks. I can put up with it if I go with Relationnel because he’s much more patient than me and will bring me things to try on so I don’t have to get dressed again to go outside the cubicle and have another look. The worst are trousers because you have to take your shoes off and lace them back on again. 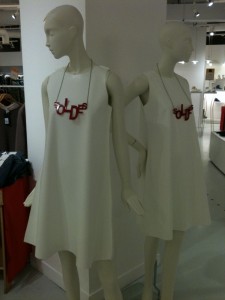 It was OK last year after I’d finally taken off my 20 kilos because I got a kick out of the fact that most of the clothes I tried on fitted me and I didn’t look like a sack of potatoes any more. But, sadly, the novelty has worn off. It’s not that I don’t care about the clothes I wear – I do, and there’s the rub. What I prefer is to see something I immediately like in the window on a dummy, preferably with a head and more or less my shape so that I can immediately imagine what it will look like on me. Then I go in, ask for my size, try it on, see that it looks perfect, pay and leave. That has occasionally happened and when I set off, I’m always convinced it will happen again and sadly disappointed when it doesn’t. 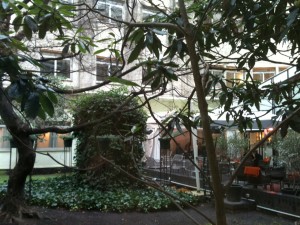 Inside garden and café terrace at Le Bon Marché

As far as department stores go – and I am not a fan – Au Bon Marché isn’t bad. They play Mozart concertos over the PA system, all the shop assistants say “hello” to you even when you’re about the bump into them, they have an exhibition called “Lieux d’amour” or Places of Love, a reading room for impatient spouses and a swish-looking Salon de Thé with a garden terrace. I couldn’t believe it when I looked out the first floor windows. It was more like an apartment building than a shop.

But I couldn’t see anything I wanted to buy, especially not the fur jackets. 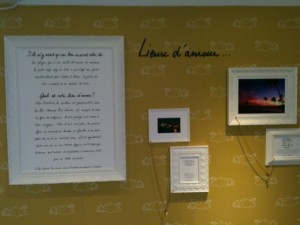 When I was little, my mother used to buy things “on appro”. That meant that either she went into the shop, chose a few outfits she liked, got them all packed into bags and took them home with her, or else, she rang up the owner of the shop, told her what sort of occasion she needed the outfit for, and a taxi would arrive a half an hour later at the door with several large bags. I’d then lie on her bed and watch while she tried on everything, in the comfort of her room, with no other shoppers around and no annoying sales people telling her that she looked great even if see didn’t. She could put on the shoes or hat to match and decide in her own good time what she was and wasn’t going to keep.

Now, that’s the way I really want to shop ….

This entry was posted in Lifestyle, Paris and tagged Au Bon Marché. Bookmark the permalink.

5 Responses to I am not a real Parisienne