3 iPhone Apps for Paris and WiFi 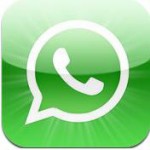 Black Cat told me about the most wonderful iPhone App called What’s App. You can send text messages for free throughout the world to anyone with an iPhone and What’s App. Wish I’d known about it last summer when I clocked up a nice little bill texting Black Cat from the 9 different countries we went to in Europe! It’s a pity Relationnel has that Bathtub because it could be very useful when we’re both outside France and need to connect up. The app costs 79 euro cents which is about one Aussie dollar I guess. 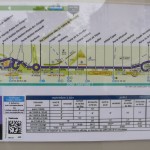 Now the next app that I also used for the first time yesterday is Mobiletag. This one’s free. You can use it to scan the QR codes at the bus stops in Paris (you know, those little black and white square things that are everywhere these days) to find out when the next bus is coming. There was someone else waiting for the bus as well so I proudly told her, “The bus is coming in 3 minutes”. “Oh, really, mine says 4 minutes. I hope it comes soon. I’m running late but I really hate the metro at peak hour”. I explained it was the first time I was using the app and she said she used it all the time. A real Parisian, obviously. 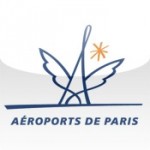 The third app is My Airport which, despite the name, is in French. It gives flight times and useful information about Charles de Gaulle airport to help you negotiate what a CNN survey said recently is the worst airport in the world. Although it’s in French, the vocab’s pretty basic : Horaires Vols Départ (departure times – vol means “flight”), Horaire Vols Arrivée (arrival times), Compagnies (airlines), Formalités (you can guess that one), Services pratiques (ditto), Services Affaires (business services), Accès (that’s a challenge) and Parking. Don’t forget to download a French/English dictionary before you go too. 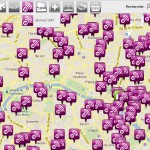 But you have to be able to use all these apps, of course. Fortunately Paris has set up a free wifi system with about 400 hotspots: in town halls (one in each of the 20 arrondissements), public gardens, libraries and state-owned museums from 7 am to 11 pm. There’s an interactive map on http://plan.paris.fr/. Just click on the W icon up in the tool bar.  Don’t be phased by the fact that wifi access screen is entirely in French. Just follow the instructions at the end of this post.

There are also lots of cafes with free wifi access in Paris. You’ll find them on http://www.cafes-wifi.com/. Once again it’s in French, but you can use the  interactive map.

You can find other suggestions for iPhone aps for Paris on liligo.com

How to connect to Paris Wi-Fi

1. Municipal buildings and gardens with a wi-fi access have an easily identifiable sign that says “Zone Wifi”.

2. Turn on your laptop or smart phone and select Wi-Fi ORANGE.

3. Open your usual web browser and enter the address of any website. You’ll be automatically sent to the free wifi access page. You then select “SELECTIONNEZ VOTRE PASS” in the orange box on the right. 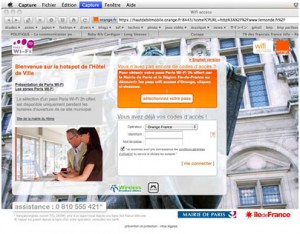 4. Fill in the form, accept the general conditions of use by ticking the box and click on [me connecter]. If you’ve already signed in before, use the box “Vous avez déjà vos codes d’accès” (you’ve already got and ID and password (mot de passe). 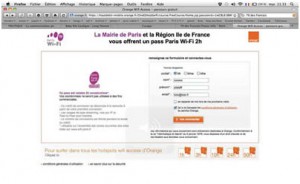 5. The Paris Wi-Fi home page will reload and you’ll get a message saying you are connected and how long your session will last.  Make sure you leave the window open because it indicates the remaining time. Each session lasts 2 hours. You can renew it simply by repeating the connection process.

This entry was posted in Lifestyle, Paris and tagged buses in Paris, iPhone, whats app, wifi Paris. Bookmark the permalink.

8 Responses to 3 iPhone Apps for Paris and WiFi