Posted on February 2, 2012 by Rosemary Kneipp 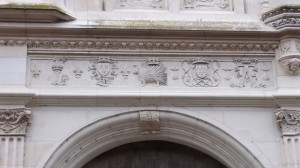 There we were, two Aussies, a Southern Californian and two Frogs, standing in a street in Blois, talking ten to the dozen in French and English, just opposite a beautiful Renaissance building called Hôtel d’Alluye built in 1508. Next to us, there was this street sweeper with one of those plastic birch brooms they have here. And he started telling us, in basic English at first, then in French once he saw we all understood, about the history and architecture of the building. He really knew his stuff! So friendly and hospitable! 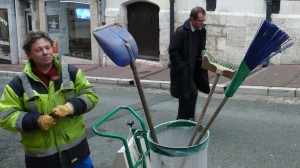 The owner was Florimond Robertet and he was the treasurer for three kings – Charles VIII, whose emblem was the blazing sword, Louis XII with his porcupine and François Ier symbolised by the salamander. Behind the façade is a courtyard with Italian-style galleries. We’ll visit it next time. 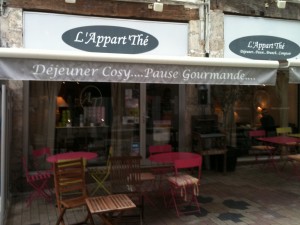 We had just come from lunch at L’Appart’ Thé, which is a double play on words. Appart’ is short for “appartement“, “thé” means “tea” and combined, you have “aparté” which means a private conversation. And that’s exactly what it is, an appartment converted into a very cosy place to have lunch, brunch, morning or afternoon tea. When you walk inside, the American-style kitchen is right in front of you and there are lots of comfy chairs and tables inside and out. Since there were six of us, we had a table upstairs. 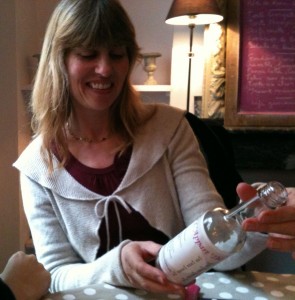 If I remember correctly, the dishes on the slate perched on the fireplace included veal stew, lentils and duck fillets and zucchini and goat’s cheese quiche, all at about 9.50 euros. The wine list was written on a bottle label and we could choose wine by the glass. We mainly went for local cheverny which comes in red and white. The white is mainly sauvignon with sometimes a bit of chardonnay or menu pineau and the red is gamay and pinot noir. 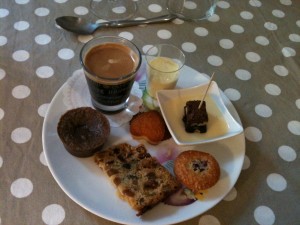 I’m not sure what the others had for desert (maybe they can help me out!), but I had a very delicious café gourmand for 6 euros with panna cotta, moelleux au chocolat with French custard, a raisin biscuit called a palet solognot which is a speciality of Chambord, a cupcake, a piece of “cake” which is a French version of fruit cake and a heart-shaped shortbread biscuit. After that, we were ready to face the cold! 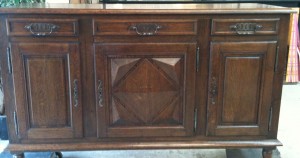 Our next stop was Troc de l’Île, a dépot-vente on the outskirts of Blois which, despite the cold –  there’s no heating in these enormous places – was great fun. We came away with an antique oak wardrobe, matching bed and bedside tables, a sideboard and a very large wicker basket to put the firewood in. Not to mention very cold feet and hands from lashing it all onto the trailer in the Siberian wind. 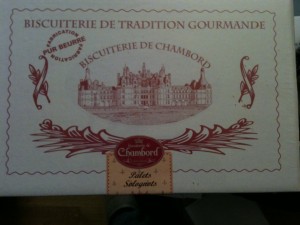 When we got it all to the new house, where the current owners are providing storage for all this new furniture and other bits and pieces until we sign on March 16th, there was lovely hot tea – and palets solognots – waiting for us! And that night, we went back to stay at one of our two favourite B&Bs in France – Le Moulin du Mesnil.

8 Responses to Three More Reasons to Live in Blois