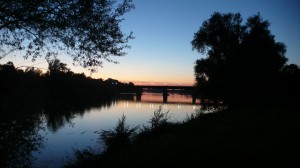 Cycling in Briare after dinner

I do, of course, love the long summer days when it stays light until 11 pm. Cycling after dinner is particularly attractive. What I don’t like is the actual changeover because it puts me out-of-kilter for at least a couple of weeks and I’m not a good sleeper at the best of times. Black Cat tells me that everyone in the metro was overly aggressive in the metro this morning because they all had to get up an hour earlier than usual! The changeovers take place around about 21st March and 21st October each year.

Relationnel never manages to remember whether he has to put his clock back or forward each time. In French they say “avancer” or “retarder l’heure” meaning “putting the time forwards or backwards”. Of course with all the electronic equipment we have these days, it’s much harder not to know about the changeover and miss a train or something though I noticed the clock on the car hadn’t changed yesterday. 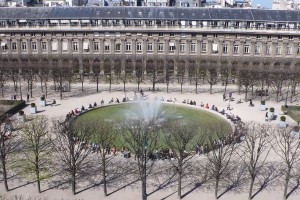 We’ve been having unseasonably warm weather too (not that I’m complaining!) which means that no one was very keen on going to bed an hour earlier than their biological clock last night either. I can remember how difficult it was to get the kids onto the new time when they were little. I even joined a lobby group in the hope that daylight saving might disappear altogether, but it didn’t do any good.

It all started of course for purely materialistic reasons. According to the French finance ministry, “Daylight saving (or l’heure d’été – summer time – as they say in French) was implemented in France in 1975 after the 1974 oil crunch with the aim of saving energy by reducing lighting, particularly in the evening. Today, it is estimated that 250,000 tonnes of oil equivalent (toe) are saved each year as a result of daylight saving in France”. So, there’s not much hope of a lobby group having any effect!

It seems that daylight saving goes back to Ancient Times and was resurrected by Benjamin Franklin in April 1784 in a well-known satire. The next person to promote the idea was New Zealand entomologist George Vernon Hudson. He was a shift worker and used to collect insects in his spare time so obviously wanted as much daylight as possible. He presented a paper to the Wellington Philosophical Society in 1895 proposing a two-hour daylight-saving shift. It didn’t catch on though until an Englishman,William Willet (poor man with a name like that), published a pamphlet in 1907 called “The Waste of Daylight”. He thought up this really complicated system of putting the clock forward by 80 minutes in 4 stages in April and then back again in September. No wonder it took another 9 years to be voted in by the British parliament, by which time poor Willet had died of the flu.

Ireland, Italy and France followed suit as did most of the other European countries after the War. But France did away with daylight saving in 1946 and didn’t bring it back until 1975, the year I arrived in France. Having been born and bred in North Queensland, I’d never experienced daylight saving before. Queensland is still holding out against the rest of the country but there’s a lot more lobbying these days, particularly by groups such as the The Daylight Saving for Southeast Queensland Party.

So now, Leonardo (who’s in Sydney) and I are 9 hours apart instead of 10. For the moment, I don’t know whether it’s better or worse.

And thank you, Wikipedia, for all the facts and figures!

One Response to Daylight Saving in France