The Secret of Eating Out in Madrid

Not that I really discovered the secret. Our bacalao experience was only the start.

The first morning, we set off from our home exchange flat for desayuno and saw that a lot of cafés were offering the American-style breakfasts we had seen in Seville obviously geared towards tourists, with fried eggs and sausages. We ended up having a cute cappuccino and a somewhat disappointing cake and decided we’d have breakfast at home for the rest of our stay. I didn’t find any Earl Grey tea though and we had to make do with ordinary yoghurts as opposed to the Activia (bifidobacterium) we prefer. We couldn’t find a bakery either but I suspect they are called something I don’t know! 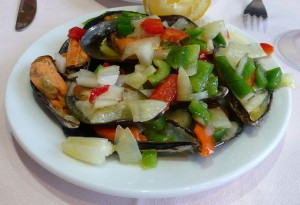 We had lunch at Eboli on Plaza Mayor. Relationnel chose from the counter – delicious mussels (mejillones) and some expensive rubbery octopus (pulpo). For our aperitivo in the evening, we went to an address given to us by our home exchange host but it was excessively noisy so we found a heated terrace at La Téa Cebolla with some good nibblies – mainly a dried sausage affair with little bread sticks and cheese. There were no tourists there. We then found a restaurant serving shoulder of lamb and went in. 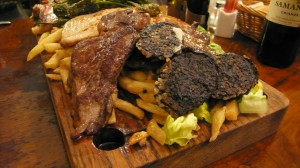 The bar area of the restaurants is always very animated and the food looks great but if you want to sit down, you find yourself in a very different atmosphere with practically no one else around and rather off-hand service. The lamb was off (of course) so we left. We were much happier at El Lacon where we had an ensalada mixta and a tabla de carne, which is a sort of mixed grill. The ensalada mixta consisted of iceberg lettuce, canned tuna, raw onion and some bits of tomatoes while the meat (very copious) was served with delicious grilled vegetables – sliced eggplant, zucchini, capsicum, tomatoes, onions and asparagus. 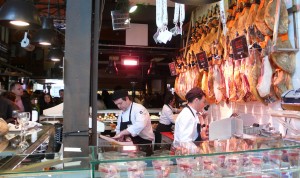 At lunch next day, we stupidly chose the ensalada mixta again (some people never learn!) and discovered that it’s always the same thing. We had tried to eat at the Mercado San Miguel, which I definitely recommend if you don’t mind standing up to eat (which is not my case unfortunately, due to my uncooperative feet). The ambiance is wonderful, they have a really wide selection of food and prices to suit every budget, but it is always chockablock, no matter what time of the day or night and, I can tell you, we tried several times. 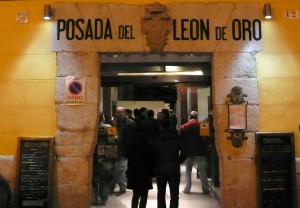 We had our aperitivo at Toma Jamon, which turned out to be a chain. It had typical barrel tables and ham legs strung from the ceiling which proved to be plastic on closer inspection! I ordered a mollete jamon iberico, thinking I was very smart, until we were given a thin steak sandwich on slightly sweet bread (that’s the mollete). After that we found a restaurant called Posada del Leon de Oro on Calle Baja which we think must be the “real” bacalao restaurant indicated on our mud map. 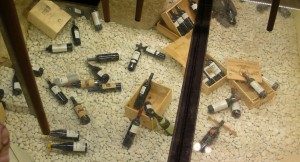 It was trendier than El Madroño and only slightly more expensive. You walk through an inner courtyard with several floors of wooden galleries (a hotel in fact, but it must be terribly noisy). The floor of the restaurant is made of glass and you can see wine bottles and cases on a sort of white gravel floor. Relationnel took the cod and found it excellent, but I thought it was rather dry. I was starving for vegetables so took the parrillada de verduras, much the same as the grilled vegetables we had at El Madroño, but with a lump of mozarella in the middle. 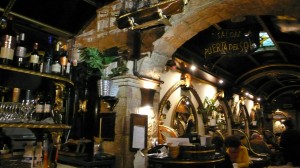 We had lunch again next day at El Madroño and I think we should have just adopted it for the rest of our stay because our eating experience went downhill from there on. We tried to have an aperitivo at the well-known Lardy on Carrera San Jeronimo, but it was closed on Sundays. We went to La Catedral next door, which made up in decor what it was lacking in gastronomy. I ordered some mushroom tapas (rollitos crujientes) which turned out to be little deep-fried bricks with mushroom stuffing. So much for the vegetables. 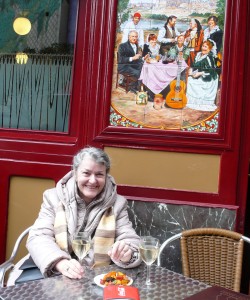 In front of El Madrono

We tried two restaurants and walked out of each of them after seeing the menu which had mysteriously changed by the time we sat down, either doubling in price or offering different food from what was indicated outside. I left my bag in the first one but the waiter very nicely ran after me in the street. I nearly forgot it the second time as well. We ended up in La Taverna San Isodoro which was full of joyous Spanish families. Unfortunately there were no lamb chops left and we ordered a parrillada de pescado for two. It looked most unappetizing so I just stuck to the prawns, the chips and a couple of rings of octopus. Relationnel, who loves fish of any shape or kind, attacked it with great gusto. 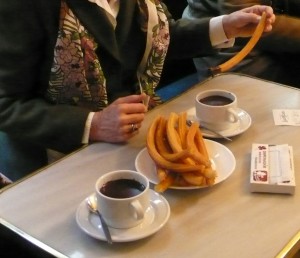 Breakfast next morning was an unforgettable experience at La Chocolateria San Ginès where we dipped wonderfully fresh churros in thick hot chocolate. We took two servings of churros but one would have been enough. They certainly kept us going while we visited the Palacio Real.

The next and last restaurant was our worst experience (mine in any case). There was bright sun at last and Relationnel wanted to have tapas on Plaza Mayor, but it’s a real tourist trap. At Bar Tinco, we were given absolutely nothing to nibble with our wine and were charged 15 euros for a few thin slices of manchego cheese! I got very angry with the waiter, but it didn’t do any good. Relationnel just shrugged it off. He was enjoying the sun.

This is a somewhat negative post but I have been travelling for very many years and usually enjoy my food experiences and am ready to try anything. We had lovely raciones and tapas in Seville and I was expecting the same in Madrid. Maybe it’s because we never learnt the secret of where to eat or what to order! I really must improve my Spanish.

This entry was posted in Food, Restaurants, Spain and tagged El Madrono, Madrid. Bookmark the permalink.

8 Responses to The Secret of Eating Out in Madrid