The idea of a home exchange first came to me when a French friend told me that her stepson and his Australian wife were going back to Melbourne to live. I consoled her by saying she and her husband could visit them for longer and at less expense if she did a home exchange. I even recommended a website I’d been told about: www.homeexchange.com. And it has an iPhone app as well. The next thing I knew she had organised a 6-week stay. I immediately set about persuading Relationnel to do the same thing despite his reluctance in the past.

We were planning our next holiday in Australia to include a family reunion in Armidale. During our absence, friends from Canberra were to stay in our apartment in the Palais Royal in Paris for part of the time. They recommended that we go to Tasmania so we organised a 12-day exchange in Launceston and Coles Bay including a car. Our exchangers will be using Paris and our new house in Blois as well as our second car while they are in the Loire Valley. We then started receiving other offers – Victoria, Hobart and Adelaide – so we set up some non-simultaneous exchanges as well, some of which won’t be redeemed until our next trip in 2014! 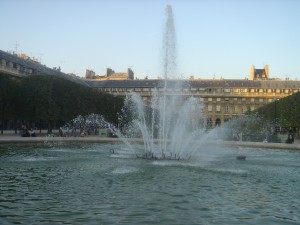 With Blois and the Palais Royal combined, the possibilities seem endless. I thought that we might appreciate a break in sunny Spain before the final signature in Blois in mid-March.  Miguel, who lives in Madrid, had written earlier on to see if we were interested in a swap over Christmas but we were having our bedroom ceiling repainted, so I contacted him again to see if there was a weekend in March that might suit us both. Bingo! We bought our airline tickets, arranging our flights so that he would arrive in Paris before we left and thus exchange instructions and keys.

The next question was how to get the apartment ready, especially for a short stay of four days. Should I empty the fridge or just leave a couple of shelves? What about sheets and towels? How about kitchen essentials? Our Adelaide exchanger, Kathy Stanford, a fellow blogger (Femmes Francophiles) is much more experienced (she uses www.homelink.org) and offered to share her “instruction manual”. It provided me with a good base that I could adapt to suit our particular situation (and country).

After a rather frenetic morning on the day we were going to Madrid, I now know that we need to have some spare room in our cupboards to be able to easily free up space for our guests. We had decided to buy extra sheets and towels so that there wouldn’t be the problem of changing our sheets before we left and finding enough clean sheets to make the bed when we got back. But just storing all this extra linen takes up space we don’t really have. Fortunately we will be able to transfer a lot of things to Blois which is much bigger. That should make things easier in the future. 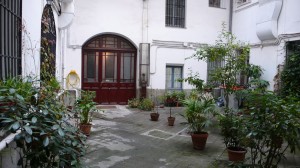 Next time, I will specifically leave a tray with kitchen essentials that don’t need replacing and indicate food in the fridge that our exchangers are welcome to use. For just a few days, it’s rather silly to have to buy oil and vinegar, tea, coffee, butter and sugar, for instance. Miguel left us a basket of fruit which I thought was a great idea. I regretted not having done the same. I put clean tablecloths and serviettes in our usual drawer in the living room but it would have been much more sensible to leave them on the table as he did. I also forgot to put the remote controls for the TV in an obvious place.

The other thing I think is essential is to have a blown-up map of the local area and indicate the closest supermarkets, grocery stores, bakeries, restaurants, pharmacies, etc. We didn’t find the supermarket in Madrid until the day we were leaving! When you don’t know a country and language well, it’s not always easy to find such basic commodities. I’ll also take along some Earl Grey tea bags with me next time. I strongly believe in “When in Rome, do as the Romans”, but not for breakfast!

I’d love to have feedback on your home exchange experiences, particularly any advice you’d like to give a new home exchanger. Oh, and I nearly forgot to say that we found it a very positive experience and are looking forward to the next six we’ve already organised over the next year. Relationnel totally regrets his former reluctance!

www.homeexchange.com (which turns into www.trocmaison.com, www.intercambiocasas.com, www.scambiocasa.com, www.haustauschferien.com, etc. depending on your language!)
www.homelink.org (not always easy to follow, but you can sign up as a visitor to consult the listings without joining)
www.homeexchange50plus.com/ (a newcomer but promising because of its speciality)
http://www.lovehomeswap.com/

This entry was posted in Accommodation, Australia, France, Travelling and tagged home exchange. Bookmark the permalink.

24 Responses to Our First Home Exchange