Meeting the Neighbours in Blois 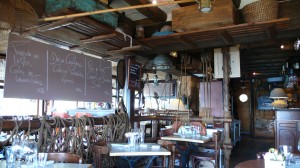 Relationnel has devised this radical way of meeting the neighbours in Blois. I would have gone for something softer myself. The first time, we were coming back from our celebratory dinner at L’Embarcadère after spending our first day in the new house. Before I go any further, I’d just like to point out that we had both had only two glasses of wine to accompany our meal. Not being used to our new address, Relationnel sailed past the house and we found ourselves at the end of the street and had to do a U-turn.

“Hey, I just want to read what this sign’s all about”, says Relationnel, backing up to get a closer look. Crruunch! That’s the problem with a country road – there aren’t any street lights and people have this tendency to park their dark grey cars in unsuspecting places. The front door of the other car was nicely bashed in while we had a broken tail light and a few scratches. No sign of who the car might belong to so Relationnel left a note with his mobile phone number (not his name, which is Avril because it happened to be April  Fool’s Day and they might have thought it was a bad joke!).

Next day, we got a call from a very friendly man who kept repeating that it was highly unusual for anyone to leave their number in such circumstances. His poor wife hadn’t been able to open the door from the outside next morning but fortunately could do so from the inside, making it less dangerous. We organised a meeting and filled in the forms together. They turned out to be middle-aged bikies (Harley Davidson) and their house  is like an American museum from the 1930s. Very friendly and understanding. We’ve noticed though that they keep parking the car in the same spot! 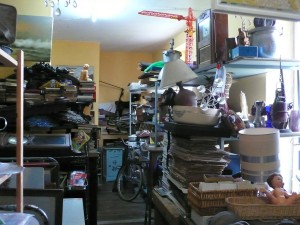 The next “meet the neighbours” episode occurred after we’d been to Argenton sur Creuse, a two-hour drive south, to pick up a Henri II glass-doored bookcase whose weight proved it was made of solid oak. I found it on leboncoin.com about a month ago and sent a cheque to the owner, a professional brocanteur. He turned out to be the real thing. I’ve never seen a shop like it – everything thrown higgledy-pickledy with not even the faintest semblance of order and all covered in layers of dust although it all looks surprisingly spruce in the photo! 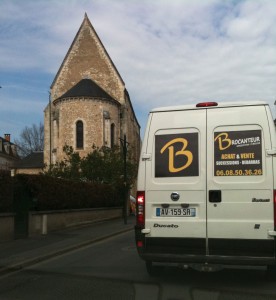 We followed him in his van up and down country lanes for about 20 minutes until we finally came to a warehouse in a village which was as messy as the shop, only bigger. While he and Relationnel looked after the bookcase, I rooted around and came up with a tall bronze lamp. The shade’s a bit broken unfortunately, but it can easily be replaced. After they had put the bookcase on the trailer and I had protected the glass doors with bubble wrap so they could be put safely on the roof rack (less chance of breakage), the brocanteur went off to deliver some other goods. 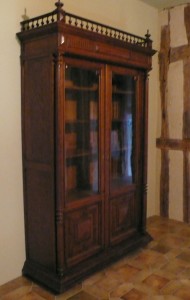 We then spent the next hour protecting it all against the rain (and rain it did, several times). When we got home, the idea was to take it up the front steps, then lift it on to the top of the railing so that it could be taken in through the door. We started, going one step at a time, but soon realised that there was absolutely no way that I could get a ten-tonne bookcase up the steps. By then it was too late to backtrack so Relationnel went off to “find a neighbour”. He came back a few minutes later with a man who couldn’t possibly be the neighbour (wrong age to start with) and they continued the operation. He turned out to be stronger than he looked.

The neighbour (right age) then arrived and proceeded to direct operations. I took him upstairs and he soon saw that the hoisting-onto-the-railing solution wasn’t going to work. The three of them finally managed to lift it high enough to get it into the living room and then onto the mezzanine. There’s no way around it – men are stronger than women! I later found out who the first man was – he was simply picking up his son from a birthday party. I didn’t get the impression the neighbour was too impressed …

This entry was posted in France, Loire Valley, Renovation and tagged brocanteur. Bookmark the permalink.

3 Responses to Meeting the Neighbours in Blois