Taking the Train to Paris Like A Real Provincial 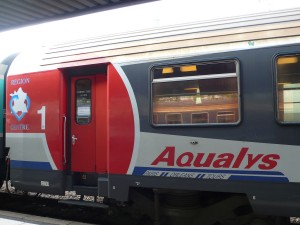 This is my first experience of commuting to Paris from Blois. I have to go up to teach a double class at uni today.  I’ve discovered I can take two types of trains – TER and TGV. The first is quite cheap – 26 euros – while the second is a lot more expensive. I’m meeting up with Relationnel in Tours on the way back so we can buy a Henri II desk we saw in leboncoin.com and since my class doesn’t finish until 5 pm, I’m travelling in peak hour, which is costing me a wacking 59 euros. I could take a later train but that would mean waiting around in Paris and it would be too late to get the desk.

You can’t reserve a seat on the TER (I have to change in Orléans anyway) but since I didn’t leave until 10.42 (I love the way the times are so precise), there were plenty of places. I do have a reservation on the TGV though – it’s compulsory. I bought both tickets over the Internet on www.sncf.fr.  For the TER, I had to put my VISA card in the ticket machine at the station to have the ticket issued. I immediately put it in the puncher because I often forget and suddenly realise in the train that it isn’t « composté » as they say in French.

The TGV reservation is quite different. I have to print out an e-ticket and show it to the inspector on the train when he comes around. I have a new printer back in Blois that I haven’t set up yet. I started to look into it this morning but I couldn’t follow what the little drawings were telling me to do. I’ll have to get Relationnel onto it during the weekend. I much prefer written instructions that I can understand. So I’ll ask the nice secretary at my uni to print it out for me. I just mustn’t forget! You’d think I could have it on my iPhone the way they do for boarding passes but I couldn’t see any options indicating that on the Internet.

The problem is that I don’t really like trains. I don’t know why. I’m always afraid I’m going to miss it or get out at the wrong place or something. The first time I took a train, I was about 20. A friend and I took the Sunlander from Townsville to Brisbane, then from Brisbane to Sydney on our way to Noumea. I think it took about 48 hours in all. The first train was a steam engine if I remember correctly. Maureen’s mother had made boiled fruit cake and all sorts of goodies so we did a lot of eating on that trip. 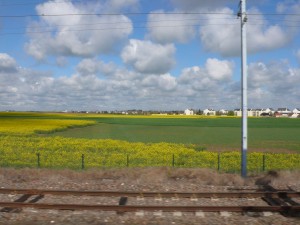 The train from Brisbane to Sydney was far more chic and we had a compartment of our own with a toilet and shower.  Not like the Sunlander with its open toilets that you couldn’t use in the station! Trains are far more popular in France and, on the whole, are efficient and on time (except when there are strikes of course, but that’s almost a national hobby). Having said that, we left Orléans 10 minutes late but I had plenty of time to take a photo of the rape fields. At least today I don’t have any luggage, just my trusty laptop, even though it’s a bit heavy to lug around.

I’m now in the TGV and it seems I could have clicked on “Download” on the email on my iPhone instead of printing out the ticket. I’ll know for next time!

This entry was posted in Australia, France, Loire Valley, Paris and tagged Blois. Bookmark the permalink.