I love my iPhone. Sounds like some corny commercial doesn’t it? But I really do. I used to 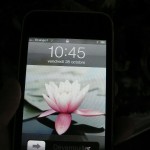 have an uncool Sony mobile with bluetooth and a cool Palm Pilot. That was before Black Cat dropped her phone in the Seine on the first day of her first real job when she went out onto the gang plank to make a private call. She could see the phone lying on the bottom of the river sinking further into the mud each day until it finally disappeared. But it was a good excuse to get an iPhone.

When she showed me what it could do, I couldn’t wait to have one of my own, particularly as my Palm was no longer performing very well. There was the added bonus that she would be able to explain it all to me. I reckon I’m pretty gadget-literate for my generation but the thought of learning how to work yet another one was a little overwhelming.

Relationnel has a Blackberry which I personally find totally useless. He came home from work one day with this little black thing and told me the others called it a “baignoire”. Why on earth would anyone call a phone a “bathtub”? He thought it might be the shape. Then it suddenly dawned on me. What they were really saying was “baie noire”, the literal translation of Blackberry, which is actually “mûre”. It’s become a standard joke in our house!

But back to the iPhone. I went to the bookshop and bought myself “iPhone pour LES NULS” because it never hurts to be a dummy even though Leonardo scoffed at me. That way I didn’t have to rely on Black Cat totally, particularly as I only see her once or twice a week which is not very often when you get a new gadget. Once I got the hang of the Apps, there was no holding me back. Now I can look up the dictionary or check out something on google whenever I want. I can find out what the weather will be like next day or next week. I can do my banking and take the bus instead of the metro (like a real Parisian) because I don’t have to try and decipher that awful bus map.

I can play WordWarp in the metro or standing in a queue. I can look up the yellow pages and give people directions in the street (instead of sending them in the wrong direction the way I did one night when a lady was looking for the theatre – never ask a foreigner for directions!). I can look up words in foreign languages. I can find out where the traffic jams are and save someone’s life with my Red Cross App (haven’t tried this out for real yet). I can listen to meditation exercises when I can’t go to sleep. I can measure the length of a room (how come I didn’t think of that the other day when we were visiting our new house ?).

I can jot down ideas for my blog and identify unknown mushrooms in the forest (and not be poisoned). I can talk to Leonardo on skype. I can consult my Paris tourist guide or the TV programme (not that there’s ever anything on) and best of all, I can take photos ALL THE TIME. Then post them on Facebook!

You may have noticed that I haven’t mentioned actually talking to people on the phone. It does happen, occasionally, and that’s where having earphones is wonderful. I can talk to Black Cat while I’m making dinner or hanging out the washing or doing some other boring thing. I can consult my emails whenever and wherever I like. And I can flick the screen and make it all big enough to see. And do you know something really strange – it took me two years to realise than when I swap languages from French to English, the keyboard switches from azerty to qwerty!!!

So, tell me, why do you love your iPhone?

This entry was posted in Lifestyle. Bookmark the permalink.