Shopping in the Sales in Tours

It’s the winter sales in France, which start in mid-January. I’m not a keen shopper at the best of times, nor am I a fashionista, so I prefer to wait for the second week of the sales and hope that prices have dropped have dropped a little further and my size hasn’t disappeared. Jean Michel and I always make a day of it, with a lunch break in the middle. 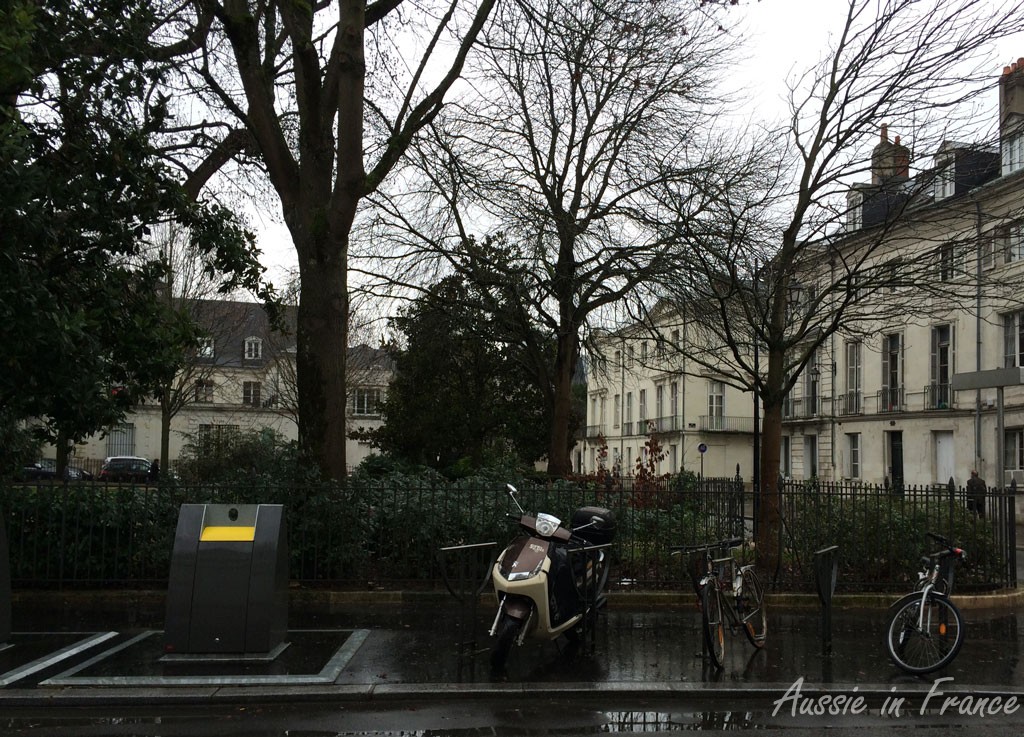 Rain in Tours on our arrival

This is the first year we haven’t been in Paris for the sales. I need several things because my Parisian wardrobe doesn’t correspond to my new life in the country. We usually start with the outlet stores in the north of Paris because that’s where I buy Sym trousers. This year, we’re heading for the neighbouring city of Tours which has a population of about 135,000, as opposed to 50,000 in Blois.

When we start out, it’s quite sunny, but as we drive along the Loire, rain clouds appear and by the time we have parked, we need our umbrellas. Our first destination is the Sym store in rue des Halles. It’s quite small with very little choice. The sales woman tries to insist that the stretch jeans are fine despite my age and it doesn’t matter if the waist gapes – it’s easy to fix. I’m not convinced. In the end, I buy two pairs of jeans that are not on sale. She looks askance when I hand over my outlet store fidelity card by mistake. I’m amused. 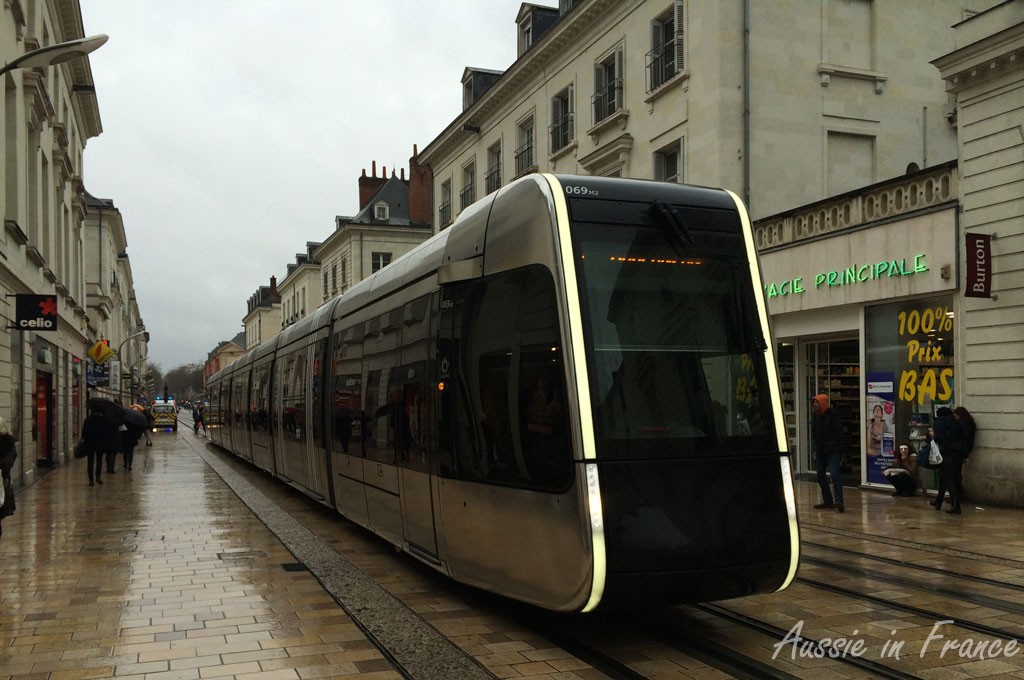 We continue on our way with little success. I google Aigle and we discover there is a store just next to the car park. We are so used to shopping in outlet stores that we are somewhat surprised by the prices. I find a smart-looking polar/wool cardigan that will be perfect for keeping me warm when I’m translating (there is a big difference between 23°C in our Parisian flat and 19.5°C in our 400 year old house when you’re sitting for long hours at a computer).

Jean Michel also finds a shirt there, by which time we’re ready for a lunch break. The rain is still pouring down so we make our way towards rue Colbert which we noticed on a previous occasion as having lots of restaurants. Quite a few are closed, however, for January, the slowest month for tourism, and we are beginning to despair when we reach the end of the street and I see a place serving mussels called La Pêche aux Moules 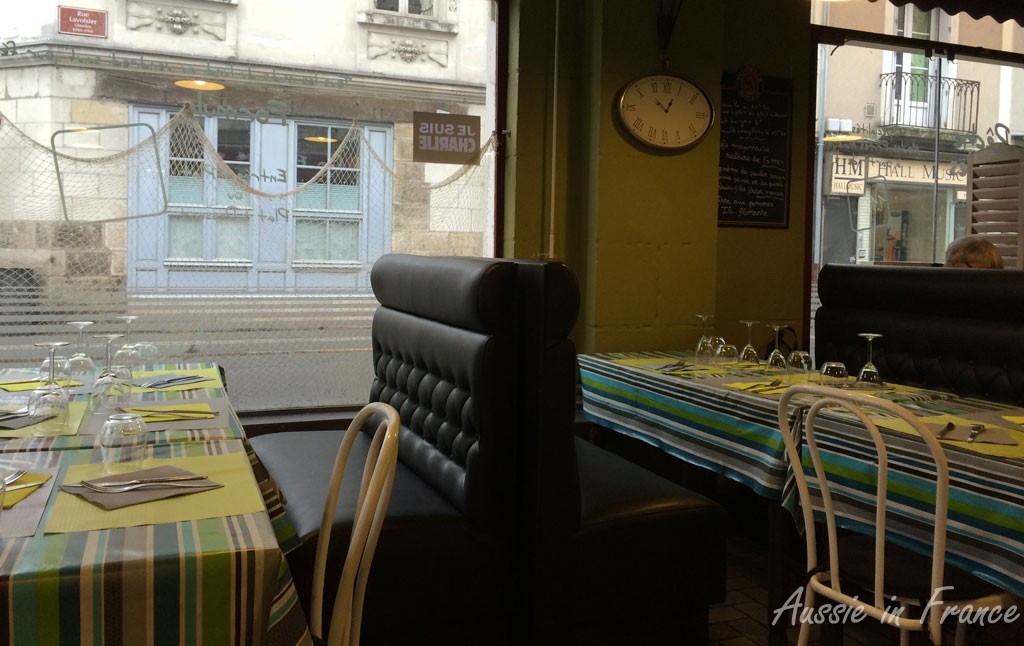 On the whole, I like to order food in restaurants that I don’t make myself, so moules marinières and French fries seem perfect. The gaily striped tablecloths are inviting and we decide on snails for starters. I can’t remember the last time I ordered them. They are disappointing however and no doubt deep-frozen. The mussels and chips are good though and having fasted the day before, we can indulge ourselves without guilt. 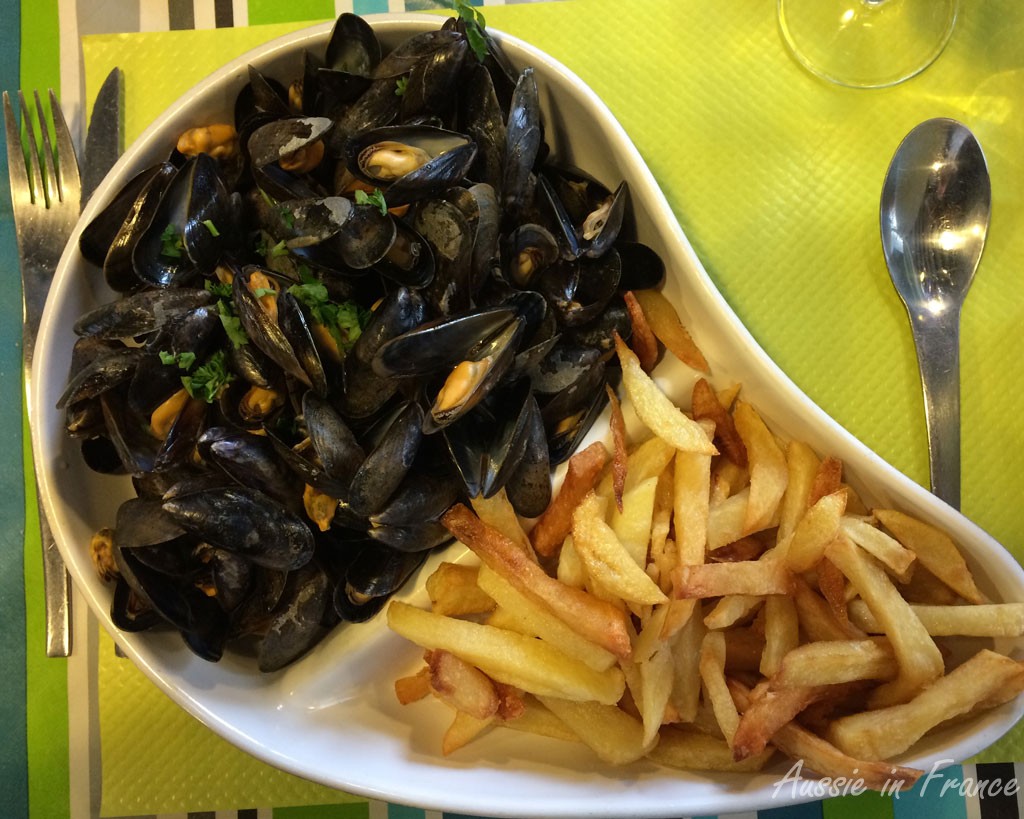 After coffee, we head for a men’s store recommended to us last time as Jean Michel needs two pairs of fine corduroy trousers. On the way we walk into an arcade and to my amazement I see a Mary Kimberly store. This is where I have been buying all my blouses, both summer and winter, for the last 15 years. I had looked on the web but only found one in Orleans.

I’m delighted because I also find a zip-up cardigan for half the price of the one at Aigle and a boiled wool jacket to go with jeans. I only discovered boiled wool last year and I’m hooked. It’s soft and stretchy but keeps its shape and is washable. 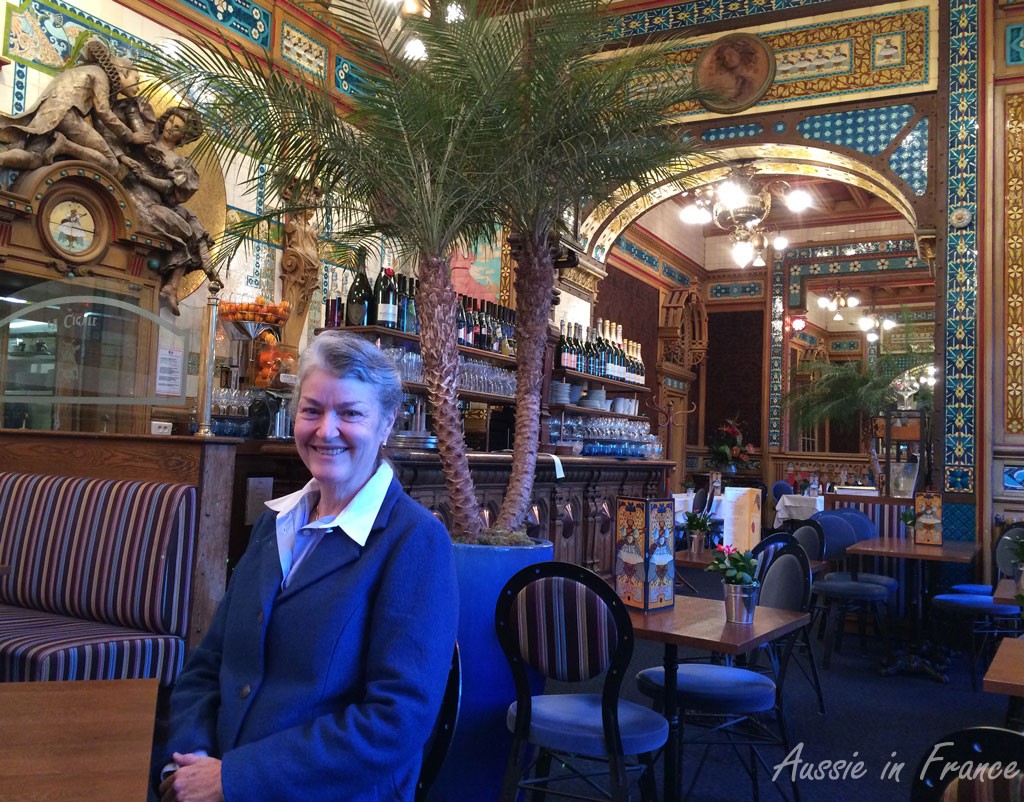 In my boiled wool jacket in La Cigale in Nantes

We traipse round Galeries Lafayette for Jean Michel’s cords, to no avail. I dislike department stores immensely. They never have what I want and they’re always overheated. They don’t even have any decent socks …

We go past the town hall, which has a sign up saying “I prefer to die standing up rather than live on my knees” in honour of Stéphane Charbonnier, alias Charb, French satirical cartoonist and journalist who was one of the victims of the terrorist shootings that took place in the office of the newspaper Charlie Hebdo on 7th January 2015. We notice a lot of Je suis Charlie signs in shop windows as well. 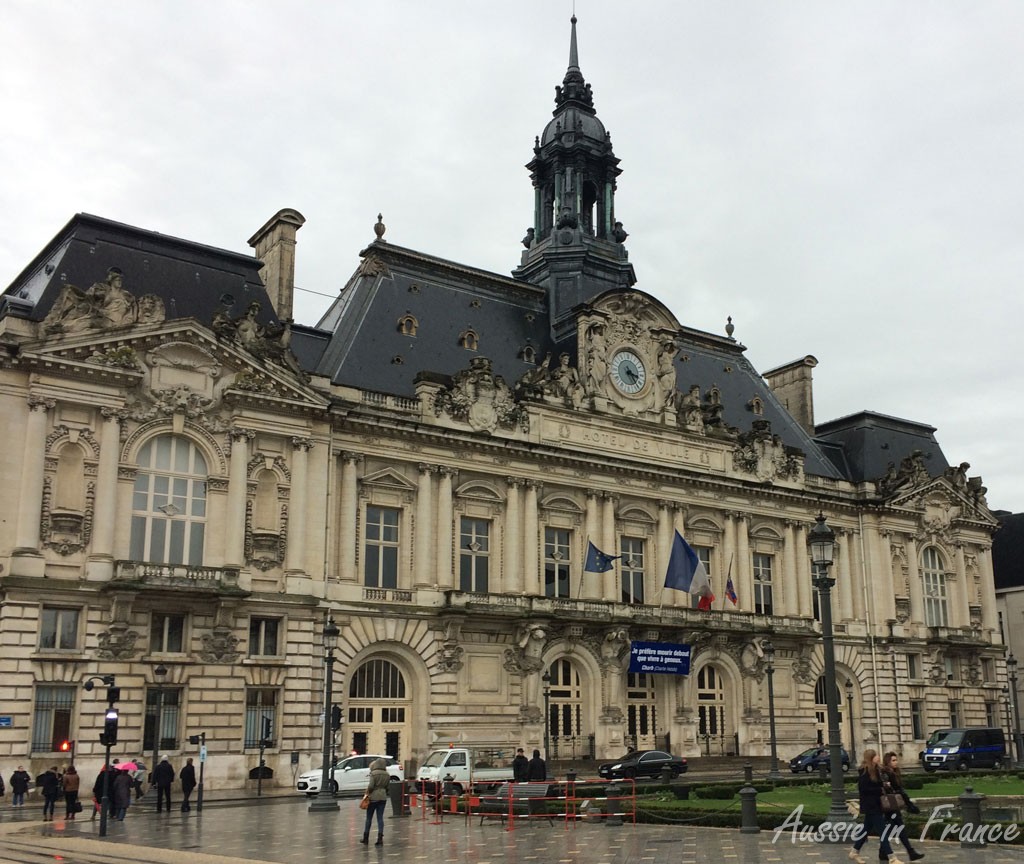 Town hall in Tours with its Charlie Hebdo banner

Jean Michel eventually finds one pair of cords, but not in the recommended store. By then, it’s time for a cup of tea. As we’re leaving we pass a kitchen store and Jean Michel picks up a very large Le Creuset cast iron pot surprisingly on sale. He’s been looking for one for some time, he tells me. 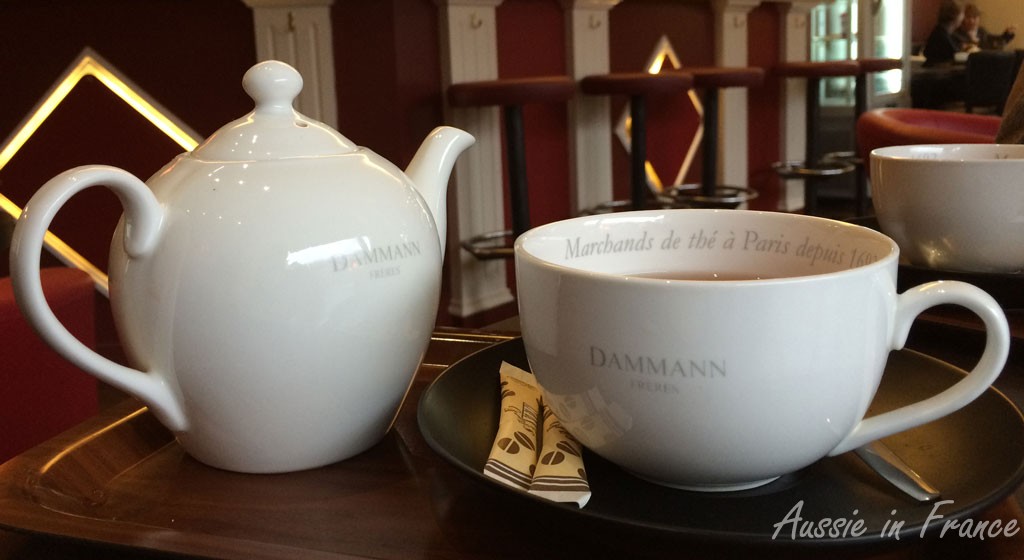 We’re still missing one pair of cords, socks for me and an anorak for Jean Michel. I google outlet stores in Tours and find an address in Chambray-les-Tours, on the outskirts of the city. We then go on a wild-goose chase through the pouring rain. I don’t know where they have disappeared, but the outlet stores are nowhere to be found. We see a Décathlon and I pick up some rubber tips for my Nordic walking sticks.

By the time we get home, which is an hour’s drive, we’ve had enough shopping! I put some of Jean Michel’s deep-frozen veal stew in the micro-wave, spread some goose rillettes on Tuc biscuits, slice some wild boar sausage and we are soon in front of the fire with a glass of our favourite gewürtztraminer from Alsace. Who wants socks anyway?

This entry was posted in Lifestyle, Loire Valley, Restaurants, tours and tagged winiter sales in france. Bookmark the permalink.

19 Responses to Shopping in the Sales in Tours