Planting Potatoes in the Rain 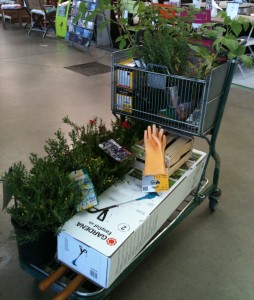 The weather was so beautiful on Monday that we decided that it was time to do some planting. We dashed out to Truffaut before it closed and filled our trolley. We started with gardening gloves (3 pairs for me – rubber, roses and everything else), a large pronged fork, an edge cutter, some perennial fuschias, more gladioli bulbs (not mouldy) and lilies for the front bed, some evergreen bushes with little yellow flowers to frame the front door, another evergreen to fill a large empty pot, thyme, rosemary and sage, 4 different raspberry bushes (so that we’ll have fruit from June to October) and organically-grown potatoes. 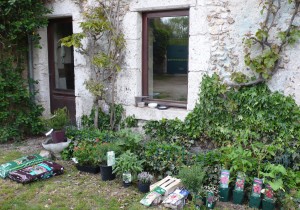 Thoughtful had already prepared the potato bed when he came at Easter which was very fortunate because when we woke up next morning, you guessed it – it was raining. I suggested we wait until it cleared during the afternoon but Relationnel said we should plant the potatoes before the earth was completely sodden. He was right , of course, because it rained steadily for the next 4 hours, showing no signs of letting up. We downed our gardening clothes (not that I really have any) and set to work. 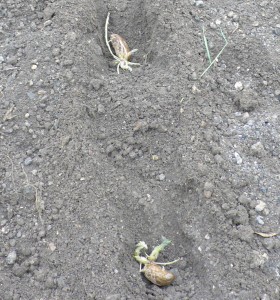 Being a city girl, I had no idea how to plant potatoes (though I drove a tractor once to harvest them!). Fortunately, Relationnel’s parents had a market garden so he is very cluey about that sort of thing. You hoe a furrow and then plant the potatoes about a half an arm’s length apart. The potatoes are pre-germinated with several long sprouts. Then you cover them up to form a mound so you know where to find the potatoes when they’re ready to pick about three or four months later.

The next thing we planted were the raspberries. This caused a slight disagreement as Relationnel wanted to put them on top of a mound that has all sorts of vegetation on it already.  I couldn’t really see myself climbing up a mound every day to pick raspberries particularly when I get old and decrepit! 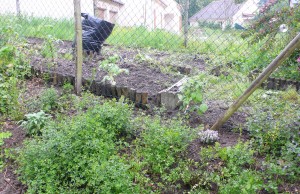 Now raspberries are the one thing I do know how to grow, because I had a long row in the garden of my house in the suburbs of Paris when the children were little. I couldn’t see why Relationnel wouldn’t let me plant them along the fence of the vegetable garden which is just perfect. It has a neat little path just in front to pick them. If you’ve ever had raspberry bushes, you’ll know that you have to get down on your hands and knees to pick the ones at the back so you really do need a path in front.

It seems Relationnel didn’t want to “waste” good ground on my raspberries. I asked him what else he wanted to plant, pointing out that he was using up most of the garden on his potatoes.  That seemed to solve the problem. So we agreed that I could put them along the fence up as far as a daisy bush that he wanted to keep. I was perfectly happy with that. 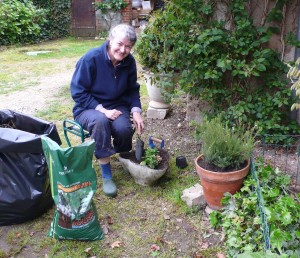 By then, we were very muddy and wet, particularly my hair which I had stupidly put in a ponytail sticking out the back of my cap. My inappropriate jeans were also falling down by then and I couldn’t pull them up again because of my excessively muddy gloves (thank god we bought those rubber ones!) I think I’ll buy some of those chic gardener’s overalls they sell at Le Prince Jardinier. My socks were soaked because my rubber clogs kept getting sucked into the mud and coming off. Rubber boots – that’s another thing we’ll have to bring down from the cellar in Paris.

We finished off planting the herbs halfway up the mound which is fine by me because I’ll still be able to snip off bits in my old age. At the end of the day, the sun came out and we were able to plant all the other things we had bought. I was also able to try out my nifty stool cum kneeler that we bought last time and that I had completely forgotten about! Good think Relationnel was there to remind me. What I hadn’t bargained for were the little beasties that headed for the gap between my socks and jeans when we were pulling out the  long weeds. I’ve been suffering ever since!

This entry was posted in Lifestyle, Loire Valley and tagged Le Prince Jardinier. Bookmark the permalink.

12 Responses to Planting Potatoes in the Rain