I went walking with my new French neighbours in Blois last week. Two and a half hours, sometimes through muddy forest, but I survived and enjoyed it! Fortunately I was wearing my trusty mushroom-picking shoes but I think I should take a walking stick next time as the clayey soil is quite slippery. 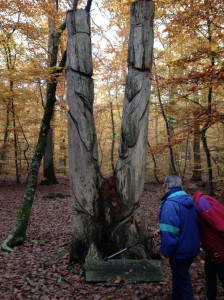 A sculpted tree during our walk

Being three women with lots to say, there wasn’t much silence between us and it being France we naturally got onto the subject of food. Liliane had already given me some lovely chestnuts and a pumpkin so I told her about the soup I’ve now made three times (recipe below). It’s a bit time-consuming but worth the effort and I can use some of the milk that keeps getting left over when I make cappuccino. 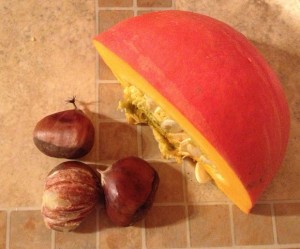 Chestnuts and pumpkin for soup

Then Françoise told us about a new, very easy pain d’épices recipe she’d just been given. Now I always thought that pain d’épices was gingerbread but this one doesn’t have any ginger in it so I checked it out in the trusty Wikipedia. According to the Dictionnaire de l’académie française (1694), pain d’épices (épices = spices) is a cake consisting of rye flour, honey and spices (today including aniseed but not traditionally ginger). So there you go! 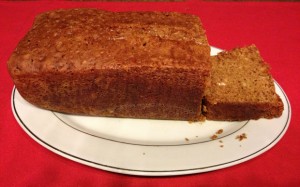 It was initially commercialised in Reims and made popular by Charles VII. They used buckwheat honey from Brittany. It soon took off in other places, including Paris, Burgundy and Alsace where it includes cinnamon. It was actually a sort of sourdough without leavening and was left to rest in a wooden trough in a cool place for several months. The honeyed rye flour fermented and the dough was cooked in moulds. Today, baking soda, invented in the 19th century, is used instead.

I decided to replace the aniseed in the recipe with equal parts of aniseed, cinnamon, ginger and nutmeg. The aniseed or Pimpinella anisum L is called anis vert in French, in case you’re looking for it.

I’m not a big fan of pain d’épices, but this one is absolutely delicious and I had to refrain from having multiple slices! Fresh or toasted pain d’épices is an excellent accompaniment to foie gras, by the way.

I read in a few recipes that you should keep pain d’épices for 24 hours before eating it, but this was delicious just a few hours later! Mr and Mrs Previous Owners loved it.

I specifically mention the potatoes because I keep forgetting I need them and have to duck down to the organic bakery to buy some as our own home-grown potatoes have run out.

1. There are different ways of preparing chestnuts. I tend to overcook them in the oven so my preferred method is to remove the outer shell with a knife, then cook them in boiling water for about 15 minutes, after which you have to remove the brown inner skin. This is the time-consuming bit. After that, you need to break them into small pieces unless you have a blender.

2. To save time, you can cut the pumpkin and potatoes into large cubes and pre-cook them in the micro-wave.

3. Slice and fry the onions until golden, add all the other ingredients and about half the milk. You can then mash or purée the resulting mixture and gradually add the rest of the milk. Heat to the right temperature.

This entry was posted in Cooking, Loire Valley. Bookmark the permalink.