The Big Fireplace Operation and a Delinquent Seller

The Big Fireplace Operation is obviously taking longer than expected, but that is no surprise. Renovations always take longer than expected. First, Relationnel underestimated the size of the fireplace itself. Second, it turns out that someone along the way used it incorrectly resulting in a thing called bistre which is a brownish substance made of burnt soot and tar and can burn your house down if not removed. 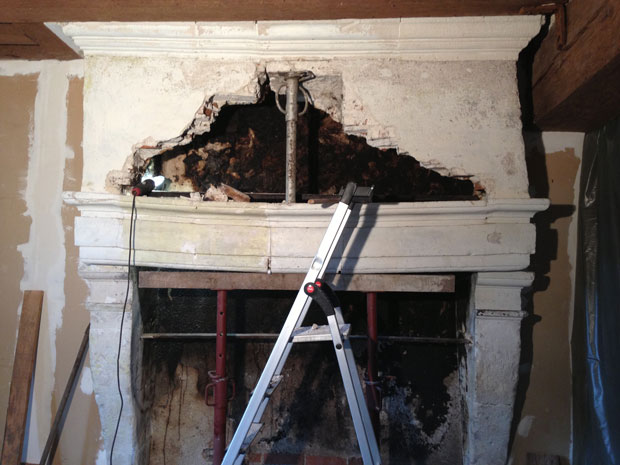 Bistre is removed by tapping away with a pickaxe. You may remember that I moved down to Blois temporarily to escape the renovations on my balcony in Paris. Well, it’s the same sort of noise. My office is just next door. I do not, however, have to listen to a radio blasting away and workmen shouting at each other. And there are no pneumatic drills. 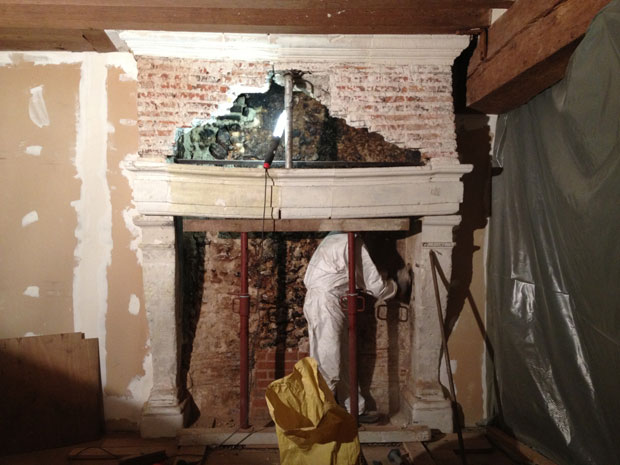 Before removing the bistre, Relationnel also chipped off the facing of the upper part of the fireplace, above the mantel, revealing a triangular-shaped hole. He had previously propped up the sunken mantle which had been erroneously reinforced with a horizontal bar by someone who obviously didn’t realize (I’m sure I would have …) that the metal would expand when the fire was lit and push the sides of the fireplace further, causing the mantle to sink even further. 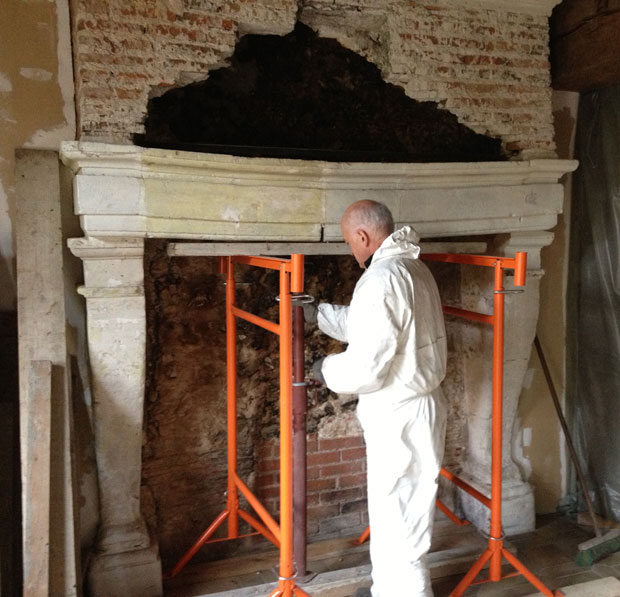 Mason’s trestles being installed to hold up mantle

At this juncture, a visit to BricoDepot was needed to buy some bright orange mason’s trestles. I must have been really desperate to get out the house to go on that excursion! First, you identify what you want in a catalogue, then you pay for it. You get one of those little raffle tickets that you give to the warehouseman when it’s your turn. He takes you to the storage area and unloads your purchases onto a large trolley. Then you get his mate to stamp your raffle ticket. You can tell why it’s the cheapest DIY place around. 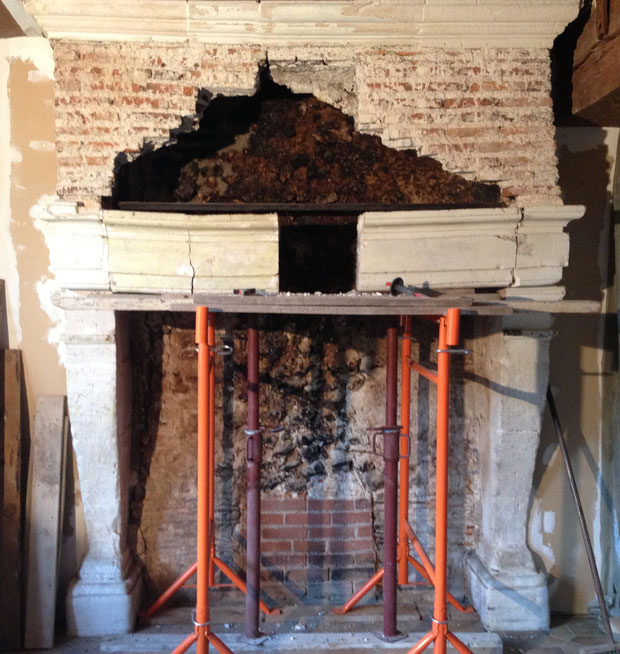 After removing the keystone

The mason’s trestles are needed so that Relationnel can remove the mantle, which consists of several large stones with plaster holding them together, in preparation of the next phase. The sides of the fireplace also needed to be sanded down to remove various layers of paint. That also produced a somewhat unnerving noise. 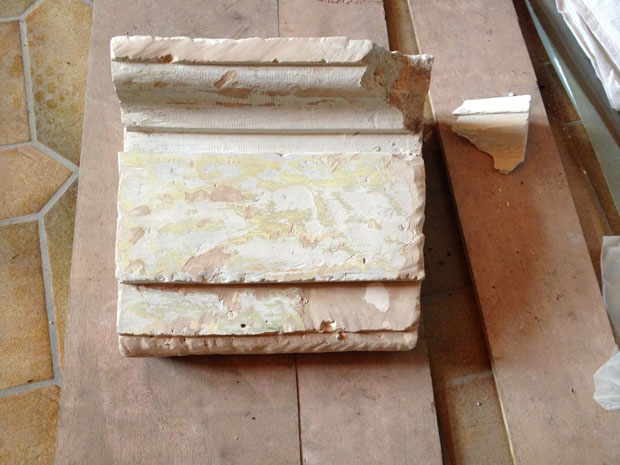 Keystone with a piece of plaster fallen off

In the meantime, we got a call from Mr Previous Owner whom we had told about the Big Fireplace Operation. You know that big, square jagged hole above the mantle? Mr PO told us it happened when the crest stone with the construction date of the house – 1584 – was removed for renovation. The stone was damaged beyond repair. I always thought that was a bit strange because none of the fireplaces are in working order. Anyway, he had a new crest stone made by a stone cutter’s school  somewhere along the way using a photo of the original and gave it to us when we got the keys to the house. 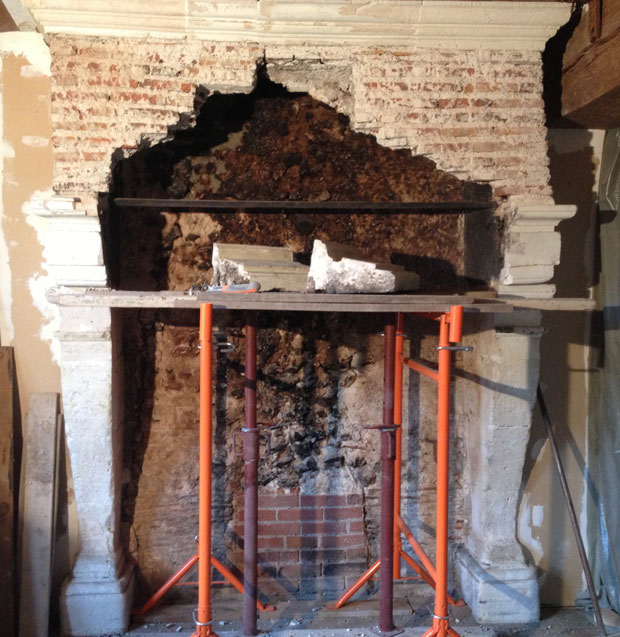 Well, it turns out to be a little more complicated. It seems that Mr Previous Previous Owner had to sell the house because of his divorce and wanted a keepsake – SO HE REMOVED THE CREST STONE. Can you imagine that anyone who loved historical buildings enough to buy Closerie Falaiseau and undertake its entire renovation would destroy its very soul? The man is delinquant. 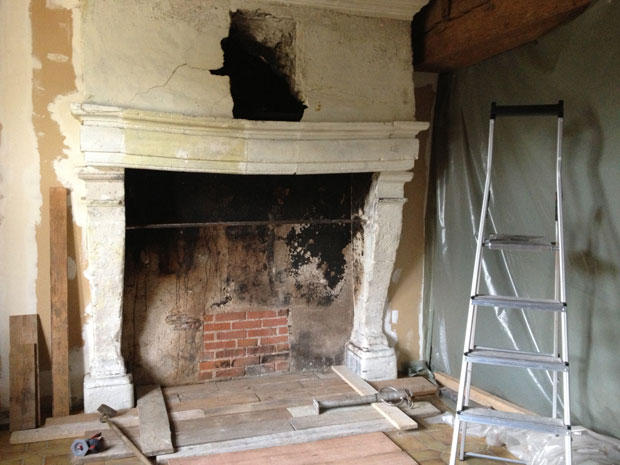 Fireplace with hole where the crest stone was removed

Mr PO, who has remained in contact with Mr PPO for some reason, phoned him and asked him if he would return the crest stone to us since we’re renovating the fireplace . Mr PO believed he was going to do so, but when Relationnel spoke to Mr PPO on the phone, he said he wasn’t ready yet and would have to check we were restoring the fireplace correctly! What utter cheek ! 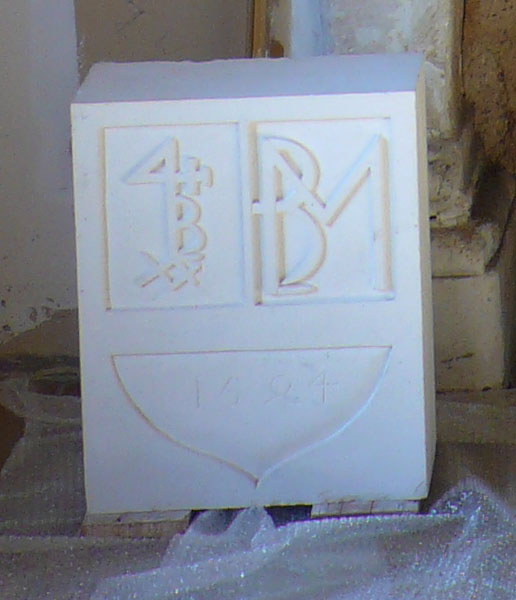 We also learnt that Mr PO was able to have the new stone made from a plaster cast of the old one which turned up in the house next door, owned by Mr PPO’s brother who no longer owns his house either.Mr PPO was supposed to come by today but he obviously didn’t. Relationnel says there is no way he is going to set foot in the door without the stone. I agree of course. So we’re going ahead and using the new stone as planned.

19 Responses to The Big Fireplace Operation and a Delinquent Seller