Two thumbs up for sign language cafe in Paris, Café Signes – The Bouchons of Lyon – Chandelle versus Bougie: A Brief History of Candles

It’s amazing how quickly Wednesday comes round again! This week’s bloggers’ round-up starts with two interesting restaurants. Mary Kay from Out and About in Paris takes us to Café Signes where sign language is the main means of communication, while fellow Australian Wendy Hollands from Le Franco Phoney introduces us to the “bouchon” in Lyon, the food capital of France. Stephanie, the Llamalady from Blog in France takes us on a different adventure with a history of candles.

by Mary Kay from Out and About in Paris, an American by birth, Swiss by marriage, resident of Paris with a Navigo Pass for the metro that she feels compelled to use. 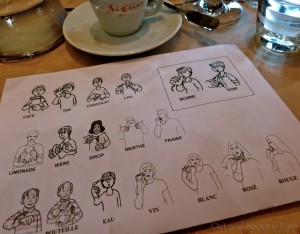 Ordering lunch or a cup of coffee in a country where you don’t speak the language can occasionally feel like a daunting task. One restaurant in Paris offers an easy solution because each of their menus has pictures of all the signs needed to communicate an order. If you’re thirsty and would like something to drink, simply make a fist with the fingers of your right hand, extend your thumb and raise your hand towards your mouth. But don’t be surprised if your waiter responds with rapid hand gestures because Café Signes is operated by a mixture of non-hearing and hearing staff. Read more.

The Bouchons of Lyon

by Wendy Hollands from Le Franco Phoney, an Australian who writes about all things French in La Clusaz, Annecy and Haute Savoie as seen by an outsider ... 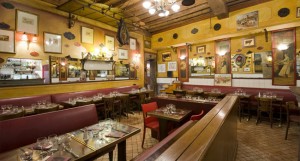 Lyon is the food capital of France, and part of the reason for that is bouchon restaurants. A bouchon is a traditional Lyonnaise restaurant, usually family-run, serving traditional dishes such as tripe, brains and tête de veau (head of a calf). Pictured is the interior of one such restaurant in Lyon, Le Bouchon des Carnivores. Some might find it amusing that a vegetarian ends up eating at a French restaurant for carnivores, and indeed, my party of four thought it hilarious, but I had the last laugh. But let me rewind. Read more.

Chandelle versus Bougie: A Brief History of Candles

by Stephanie, the Llamalady, from Blog in France, an Irish llama and alpaca breeder living in the centre of France, who also runs a carp fishery and a holiday gite. 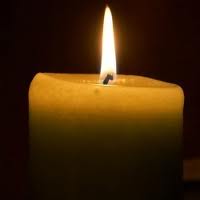 What is it about winter nights and candles? I’ve been having candlelit baths (known as spooky baths in the Dagg household) for about a month now. They’re wonderful! Candles feel cosy and relaxing but I’d never think of lighting one in summer, even late when it is dark.

Candles have been around in various forms since the Chinese Qin Dynasty in 300 BC. Yup, the Chinese got there first as usual and used whale fat. Beeswax came in about rather later. Read more.

This entry was posted in France, French customs, Paris, Restaurants and tagged Blog in France, Le Franco Phoney, out and about in Paris blog. Bookmark the permalink.

2 Responses to Two thumbs up for sign language cafe in Paris, Café Signes – The Bouchons of Lyon – Chandelle versus Bougie: A Brief History of Candles