What am I really? Australian or French?

If you’ve been following my blog, you’ll know that I recently went on holidays to Australia and it was not always as I expected. In my monthly guest post for My French Life, the global community of French and francophiles connecting like-minded people in English & French, I ponder on where I really belong. 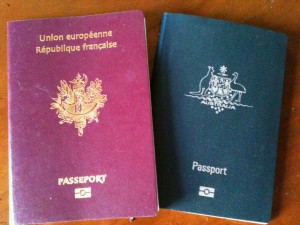 I lobbied alongside fellow expats from the Southern Cross Group a few years ago to have the Australian constitution changed so that Australian citizens living overseas could have dual nationality.

We were successful so I applied for French nationality. Now I can vote in French elections and I have a French ID. I can’t vote in Australia, though, because I have been ‘disenfranchised’ as I no longer reside in Australia.

When I travel to Australia, I use my Australian passport and when I return to France, I use my French passport. It’s like slipping into another skin. Read more

If you would like to receive further posts by email, you can subscribe by filling in the box on the right.

11 Responses to What am I really? Australian or French?