Bussing in Barcelona and a Lost iPhone

After taking the metro once, we decided we’d rather use the bus, particularly since there were no direct metro lines between Sant Pau where we were staying and most of the places we wanted to go. Jean Michel took charge and, after six days, knew his way about better than our home exchange host who has never taken the bus in Barcelona. We took the metro once on the last day and got out at the wrong station. 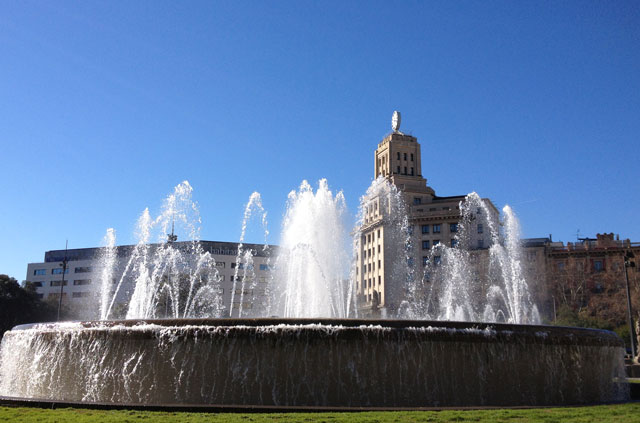 You can use the 10-ticket metro card on the bus (just under 10 euro) and keep using it for 1 hour 15 minutes, which was handy when had to change bus lines. It was rare not to get a seat and most of the time the bus was half empty, but I guess there are a lot more people in the summer. The big advantage is that you can see where you’re going and it gave me a lot of opportunities to examine the architecture. 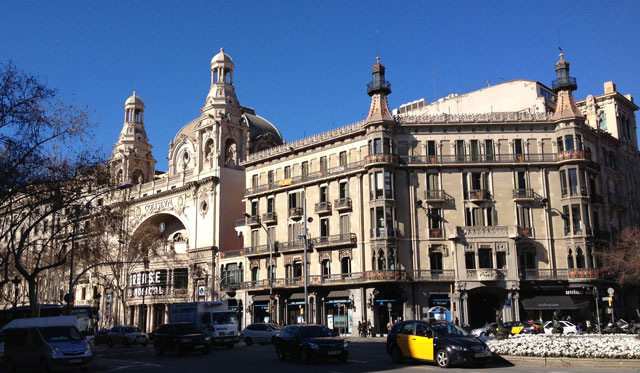 The city of Barcelona is laid out on a grid plan, except for the Barri Gotic, the historical quarter, which has lots of little streets arranged more haphazardly. The other streets are very wide and the intersections all form a hexagon. At most bus stops, there are luminous signs indicating when the bus is coming but they are most unreliable. They say “imminent” when the bus has already left and will just from 4 mins to 6 mins and back to 2 mins waiting time for no apparent reason. 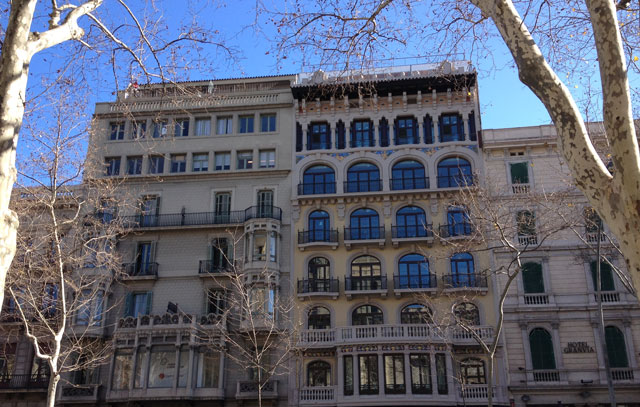 One time, the sign said there was a 25 minute wait bus, so we decided to walk down to the next stop that had a better selection of lines. After a couple of minutes, we say the bus go whizzing past. Usually though, the most you have to wait for a bus is about 10 minutes. 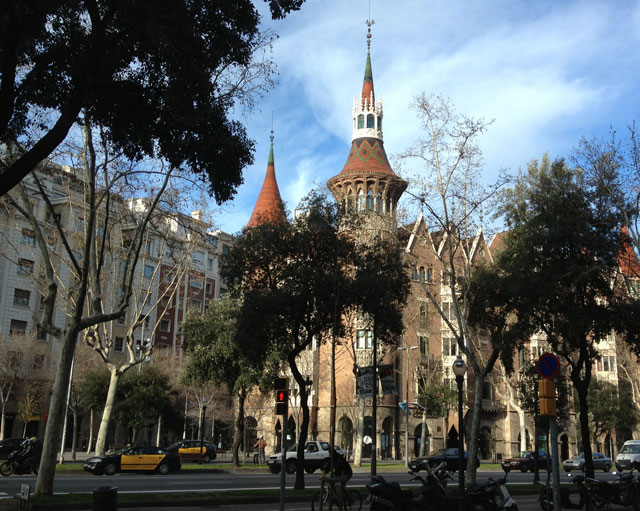 Inside the bus, there is a sign indicating the next stop and often a recorded voice to go with it. It took me a while to realise that “Prospera parada” was not actually a stop but means “next stop” in Catalan. 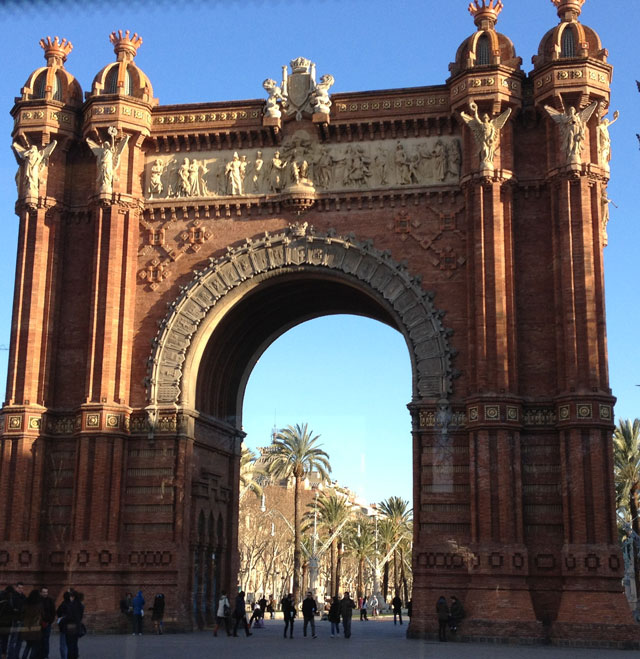 I’m not sure what time the buses start running, but they go until about 10.30 pm. If we went home later than that we would take a taxi, which cost from 8 to 11 euro depending on where we were. There are positively zillions of taxis and you only have to stand on the pavement looking expectantly for one to appear. 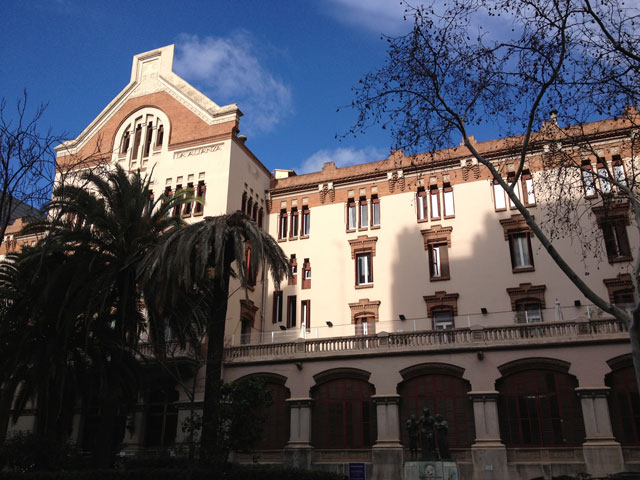 When we come out of Cinc Sentitis at midnight on the last evening, a cab immediately pulled up. However, when we reached the flat, I suddenly realised that I no longer had my iphone. I rang the restaurant but they hadn’t found it. Next morning, I rang the central lost & found number for taxis (902101564) and was still hopeful the taxi driver might have found it and handed it in (I’m pretty sure it slipped out of my pants pocket when I sat down – no points for stupidity here). 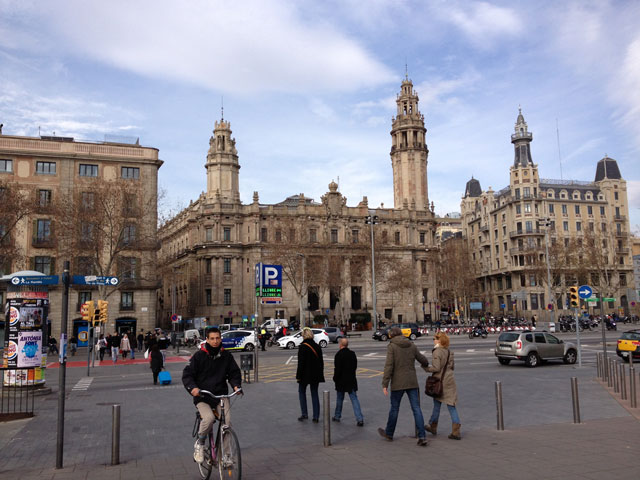 However, by the time we left Barcelona at 3.30 pm, it still hadn’t turned up. In the meantime, I went to the big Apple store next to Plaça Cataluyna where a very friendly Australian helped me log into my account and declare it as lost. But since International Roaming was switched off (I had been using wifi), there was no way of tracking it. At least none of my photos are lost because I downloaded them all just before we went out for dinner and I synchronised recently. 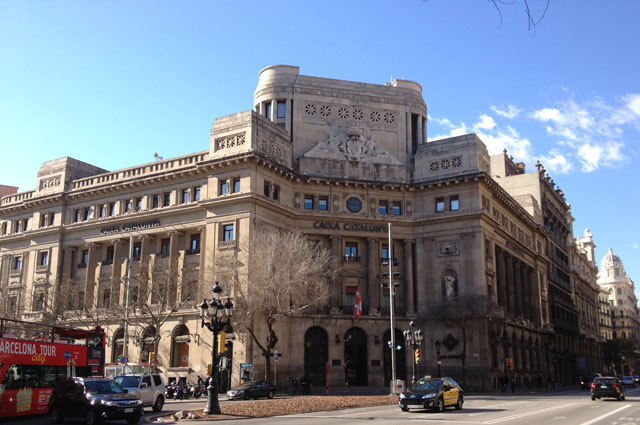 The Australian sent us to the police station on the Plaça but it would have taken more than an hour to make a declaration and we obviously didn’t want to miss our flight. There were three other lots of tourists declaring missing items, but theirs were all cases of pickpocketing. By the way, all the taxis are identical – black and yellow – regardless of the company. You need to memorise the number each time as you get in or ask for a receipt. Neither of which I did, obviously. 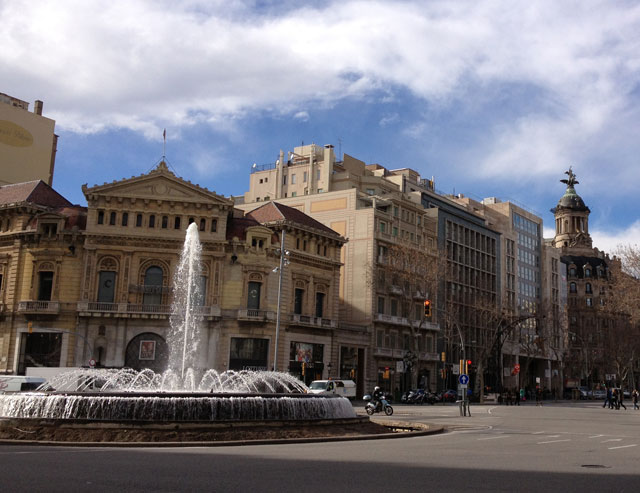 I can see that tomorrow’s going to be a long day organising a replacement with my phone insurance.

2 Responses to Bussing in Barcelona and a Lost iPhone