The trip with Easy Jet went perfectly and we even arrived early at our home exchange which gave us time to have a look around us. We’re just across the road from the former Hospital de la Santa Creu i Sant Pau in the El Guinardo neighbourhood, built between 1901 and 1930 and now a UNESCO World Heritage site. It ceased to be a hospital in 2009 and is undergoing restoration for use as a museum and cultural centre. 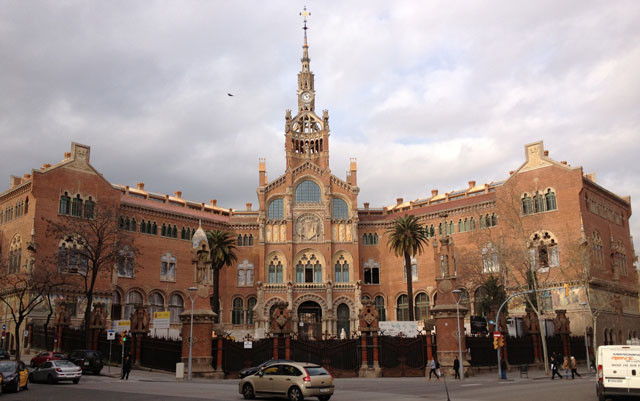 When you turn your back to Sant Pau you are looking straight at Gaudi’s famous Sagrada Familia cathedral. Our flat is on the 5th and last floor and a small flight of stairs leads onto a terrace where we have a spectacular view of the hospital. Unfortunately it’s a little cold to take our deck chairs up or we could have breakfast there! 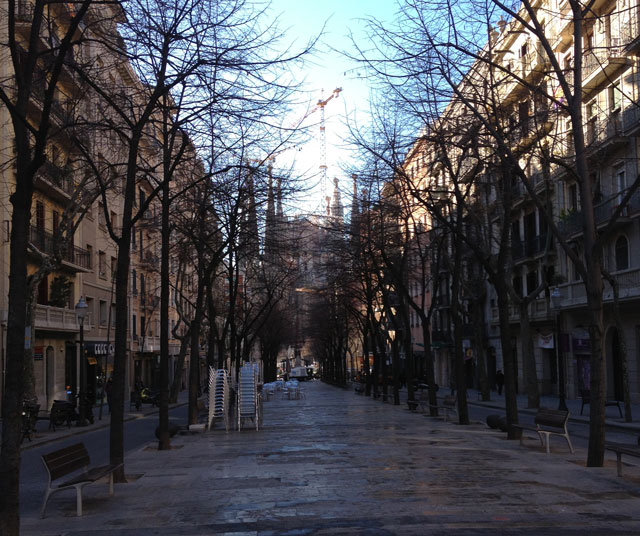 In the evening, at Pep’s suggestion, we went into the Barri Gotic which is the historical quarter of Barcelona. We decided we’d walk and it took an hour and a half! We were justly rewarded though. Pep had recommended a tapas restaurant called Bilbao Berria on the corner of Plaça Nova with its beautiful Gothic cathedral. We weren’t able to visit the inside because it was just closing. 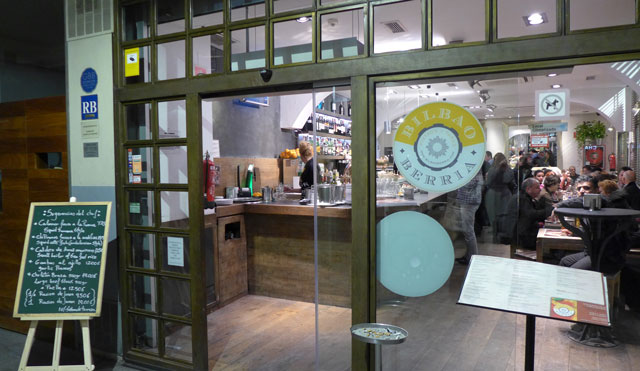 We found the restaurant and it was so good that I have a sneaky suspicion that we are going to be disappointed wherever else we go. Theoretically, they weren’t tapas, but « pintxos », which are hot or cold finger foods with a skewer through them which you choose yourself from the bar. They all cost 1.65 euros a piece and from time to time, the waiter comes around and puts the skewers in a glass. At the end, he counts them all up. So much easier than looking at a menu! 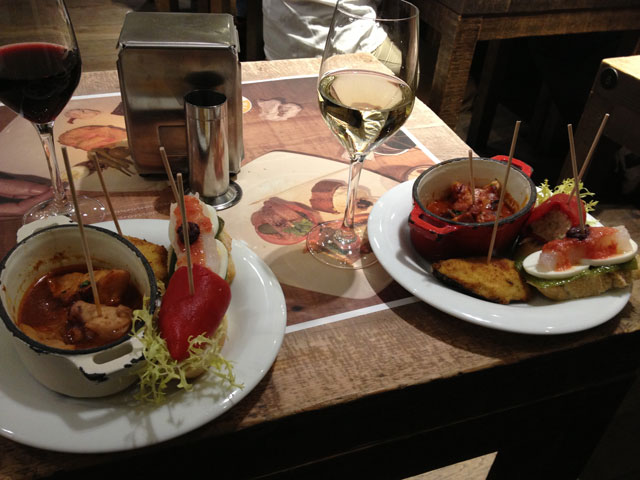 After all that walking, I stayed put and let Jean Michel choose the tapas. The variety was amazing. There were even mini hot dishes, one octopus and the other veal. My favourite had two sea scallops and 3 prawns! I have to confess we had second helpings, then I went and chose a couple of desserts! We decided to take a taxi home. They’re very reasonably priced here. 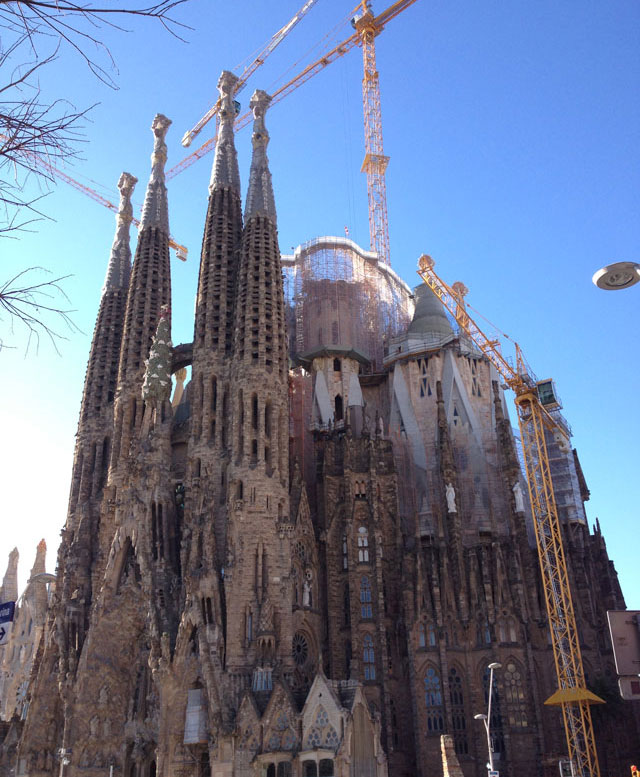 Next morning we went and had a closer look at Gaudi’s unfinished cathedral but when we saw the queues of people waiting to get in, we decided to get tickets on line and come back another day. I’m not sure yet what I think of the cathedral. It’s very impressive, like a series of enormous stelactites but I’m not sure I like the naive sculptures and gaudy colours. I did wonder whether the word comes from the artist, but apparently it doesn’t. 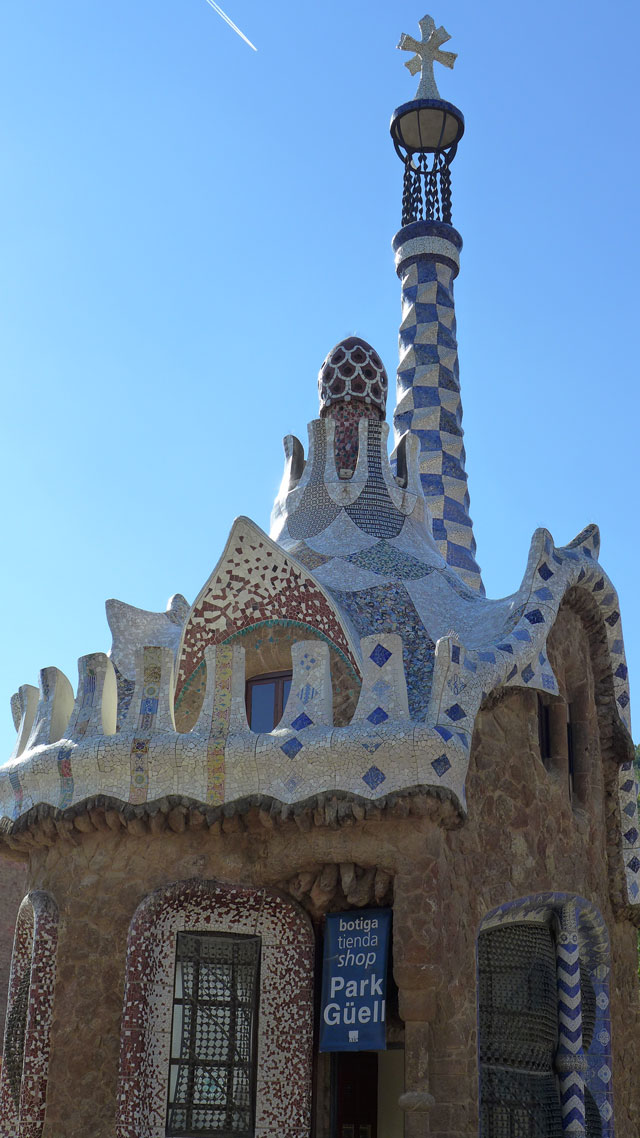 Pavillon at the entrance to Guell Park

We then took the very modern metro to Guell Park, also decorated by Gaudi. A 10-ticket card that can also be used for the bus costs just under 10 euros, which is much cheaper than Paris. It took about 20 minutes to walk up the hill to the park from the metro station but despite the cold, the sun was out. 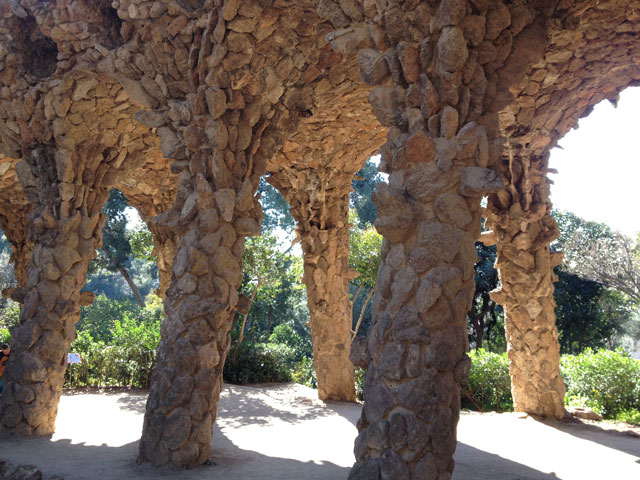 I really liked the park, which was never finished, like a lot of Gaudi’s work, because Count Guell eventually ran out money. When we got there, there weren’t many people but by the time we left, it was crowded. Initially though it was very still and peaceful, with musicians scattered about playing classical music and Spanish guitar. From the top there are sweeping, though a little hazy views of the city of Barcelona and the sea. So when we left the park, that is where we headed. 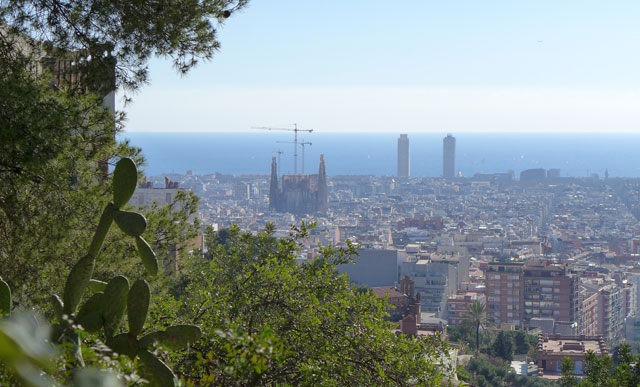 View of Barcelona from Guell Park

9 Responses to First Impressions of Barcelona – Gaudi and Pintxos