Oh no, snow again in Paris!

When I woke up and saw the snow yesterday, I was not happy. I was already in spring mode and the idea of temperatures below zero AGAIN was not appealing in the least. As it was, we were very lucky to have got home from Blois without being trapped for hours like many weekenders from Normandy. 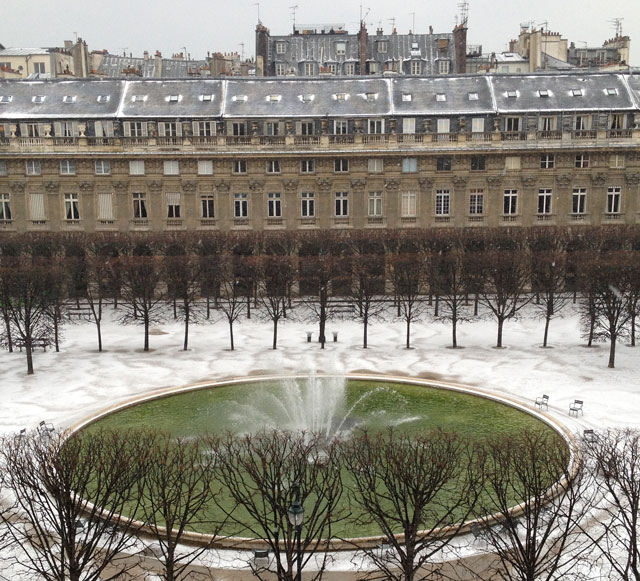 It snowed ALL DAY and I was not tempted to go outside. However, I had signed up for a Tweet-up organised by Tom and Monique Reeves from Discover Paris and since it was being held in Caveau Montpensier just across the Palais Royal gardens, I donned my warmest clothes and set out in the falling snow. 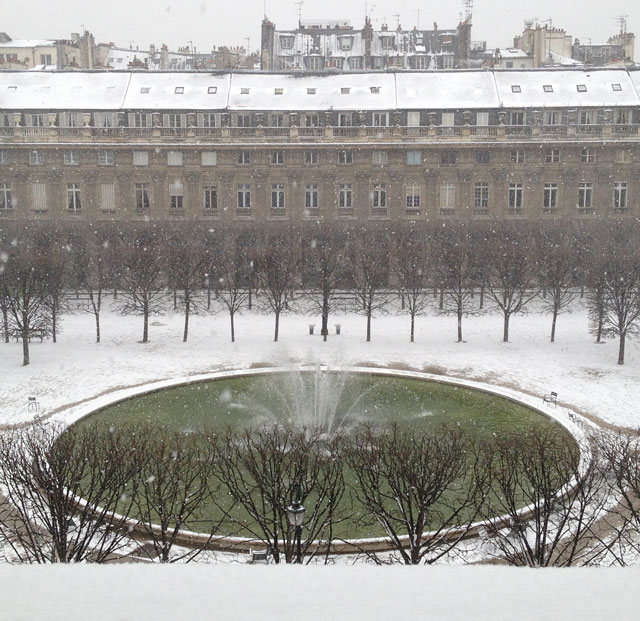 Snowing in the Palais Royal in the afternoon

Not surprisingly, there weren’t many of us there but small numbers have their advantages because I was able to talk to most of the people present. Afterwards, Adrian Leeds who runs a real estate agency for expats, Lisa from Flavors of Paris who runs walking/tasting tours in Paris, Donna Morris from Best Friend in Paris, who gives localised tours of the city, and Mary Kay from Out and About in Paris, whose very interesting posts I’ve often featured in my Wednesday’s Blogger Round-Up, walked down the road to have Japanese food at Higuma. 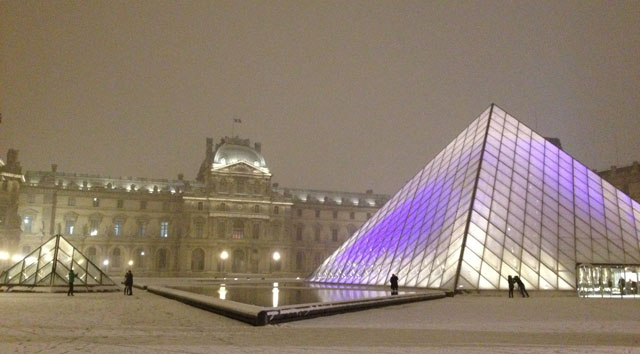 Snow on the pyramid at night

As we left at about 9 pm, despite the wind and sleet, Mary Kay said she was going to the Louvre to take photos. I couldn’t resist and shall be eternally grateful. Otherwise, I would NEVER have taken this photo! Our hands were excessively cold by the time we left but it was certainly worth it. 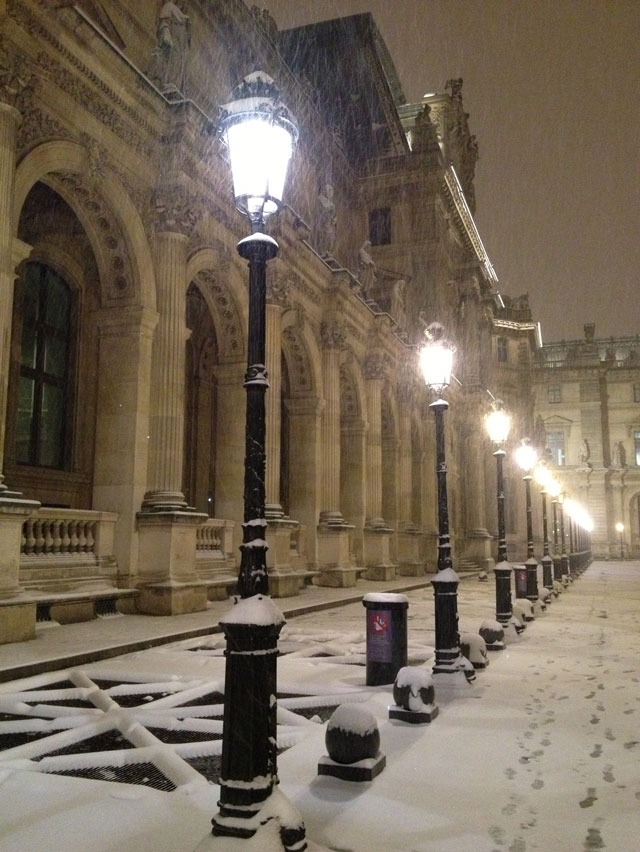 Snowing on the Louvre

Mary Kay then suggested that I come back again early next morning because the pyramids would be looking great with the snow and ice in the sun. When I fell out of bed at 8 am (I am not an early bird by any manner of means), I must say that the view outside my window was very tempting despite the fact that it was zero degrees. 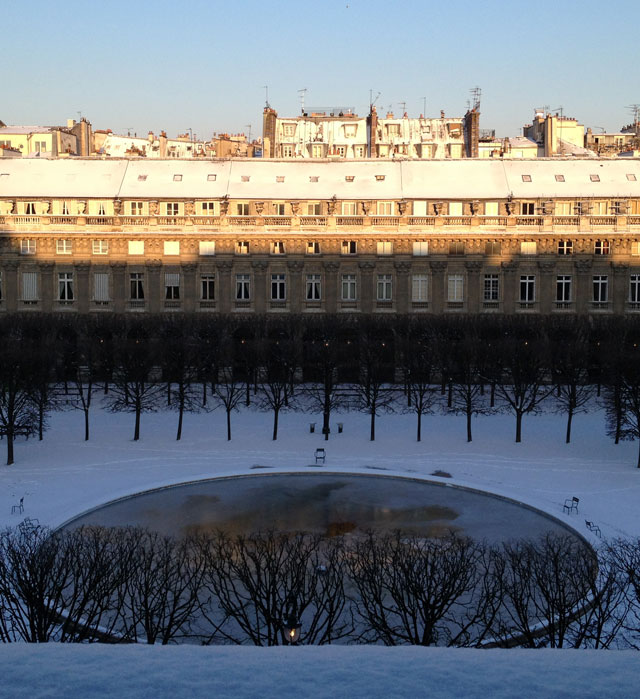 Snow in the Palais Royal gardens this morning

So after a quick breakfast I put on my heavy-soled walking shoes and set out, walking gingerly over the icy patches like everyone else. I felt sorry for the smart executives with their high heels and leather soles but I didn’t see anyone actually fall. There were some young Japanese tourists sliding across Rue de Rivoli but I wasn’t taking any chances. 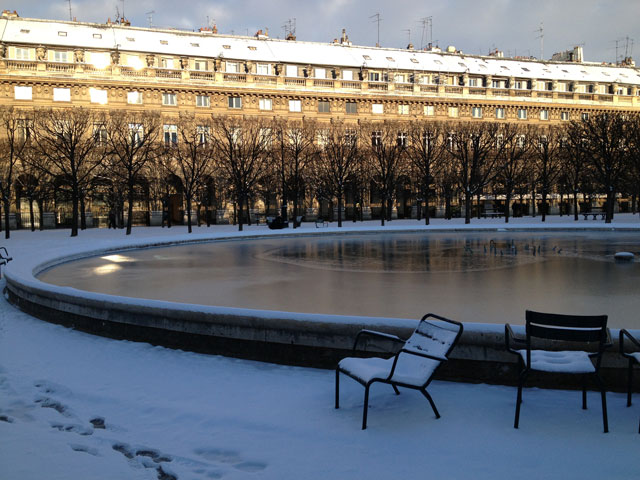 Empty chairs in the Palais Royal garden this morning

The sun over the icy pyramids really was wonderful but I had to keep putting my hands back in my pockets after each photo to stop the frost bite. 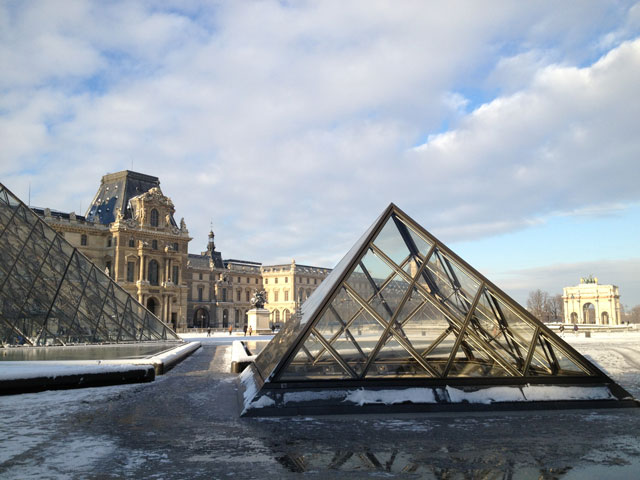 Sun on the Louvre pyramids

When I got back to the appartment, I drank a whole pot of hot tea! 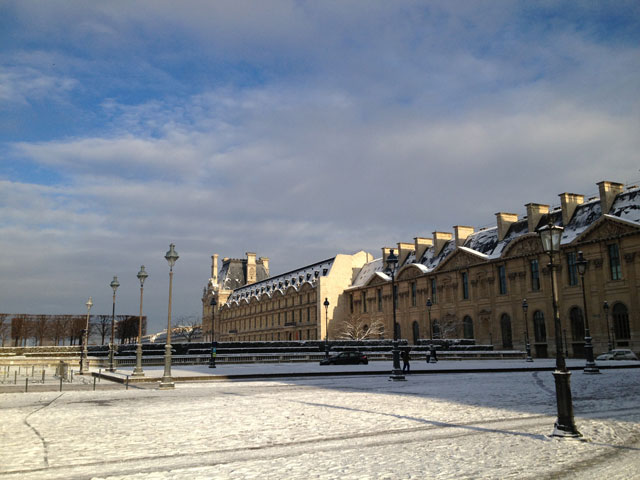 Sun on the Rue de Rivoli wing of the Louvre

This entry was posted in Architecture, Paris and tagged Louvre, Louvre pyramids, Palais Royal, snow in Paris. Bookmark the permalink.

11 Responses to Oh no, snow again in Paris!