Why the Fireplace Smokes and Other Annoying Things

We seem to be having a run of bad luck and are hoping we’ve come to the end of it!

The first thing we did after we got to Closerie Falaiseau late Wednesday afternoon was to turn up the heating. Then we went to buy an espresso machine to replace the cheap-O one that gave up the ghost last time we were here. You may remember that I have a super-duper Italian one in Paris which grinds the coffee beans and now makes excellent espresso, cappuccino and latte. We had decided on a De Longhi for Blois which uses both ground coffee and pods and is reputed to be sturdy. 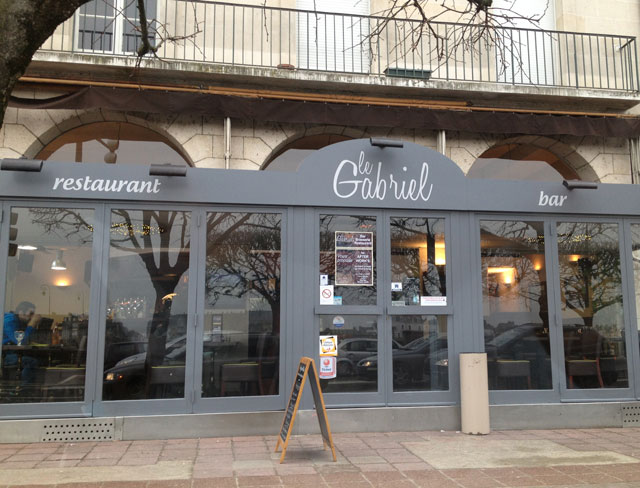 Neither of us felt particularly keen on going home to cook and eat in a cold house so we went to Au Coin d’Table. It was closed. Since it’s winter it’s only open from Thursday to Sunday. So we went to Le Penalty instead, which isn’t quite the same. Also it’s changed owners since we were here last and is now called Chez Gabriel. I’m not convinced that the French fries are really home-made as claimed.

The second time we used the espresso machine, the on/off pilot light stopped working. Jean Michel took it back to Darty to have it replaced but they didn’t have any others in stock. We have to go back again later in the week, but we’re using it in the meantime, of course. Either I have become a foamed milk expert or the wand is much better than any others I’ve tried but soon I’ll be doing latte art! 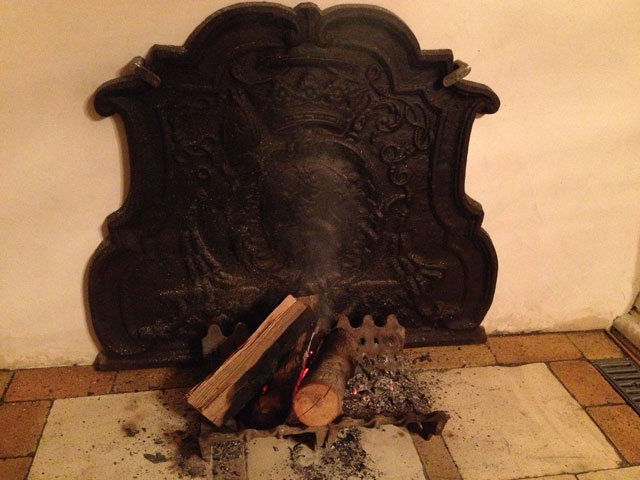 The fire that wouldn’t burn

The most disappointing thing on the bad luck list is the fireplace of course As you know, it smokes. After the first try with green, damp wood, Jean Michel went off next day and bought some dry firewood. This time, he couldn’t even get it to burn! And there was still smoke. We called the roofer.

The roofer came on Saturday afternoon, took one look at the fireplace and said, “Le tablier est trop petit”. According to him, the fireplace is not deep enough for its size and, as a result, will never work properly. He thought maybe we had changed it in some way. He also explained that we have a hill behind us which does not help and that grey days such as we’ve been having recently aren’t conducive to a good fire either. He did agree, though, that opening up the top of the chimney might make a difference. He obviously can’t come this week, but will come in our absence. It turns out it will be a lot cheaper than we thought. 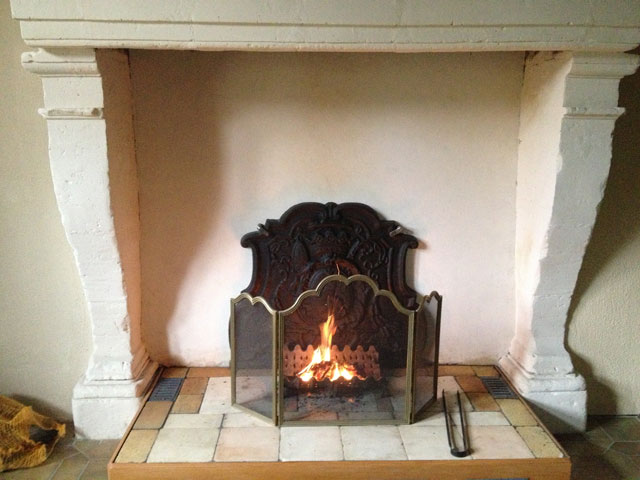 A little fire at last

Next day, the sun came out and the clouds lifted so Jean Michel split the wood into smaller pieces and we eventually had a small fire going without too much smoke. Feeling more optimistic, we went rushing off to Troc de l’Ile to find a sofa. Jean Michel wanted two sofas so we could both lie and read in front of the fire.  The first person we saw was Mrs Previous Owner. We found two likely looking candidates that were cheap enough to throw away in a year and a half when we bring our furniture down from Paris. However, they were pretty massive, so Mrs PO very kindly phoned Mr PO to come and help take them up to the living room as I certainly couldn’t. We strapped them into the trailer and set off home. 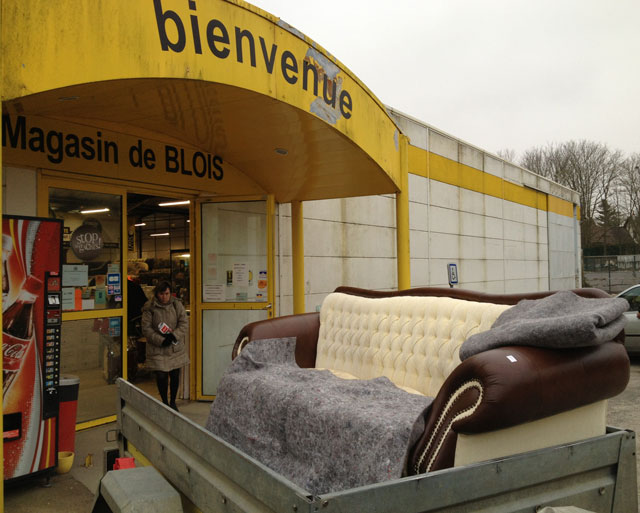 On the way, Jean Michel suddenly said, “I think they are too big to take through the door.” It was also the first thing Mr PO said when he arrived. We measured all the doors and windows and had to face up to the sad fact that there was no way we’d get them upstairs or even downstairs for that matter. I phoned Troc de l’Ile and told them we were coming. We got there just as they were closing. Everyone was standing around waiting for us! We took our credit note and said we’d be back next day. 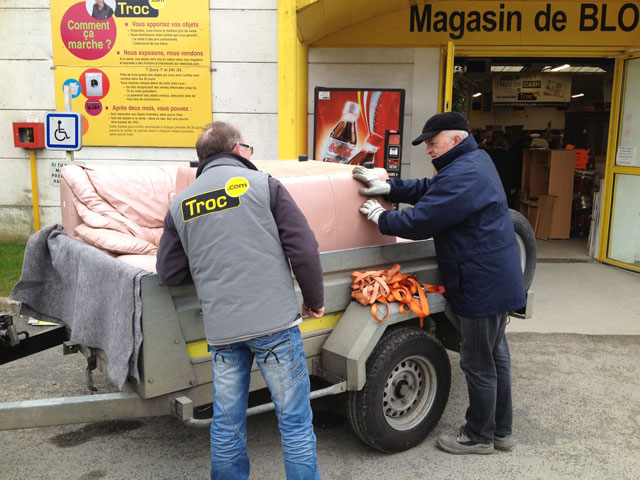 We managed to find a matching leather sofa and armchair and a second armchair with a footstool that Jean Michel is happy with. They were also not as heavy which meant that I could help take them upstairs. But the fireplace still smokes and we’ve given up any further attempts until the roofer has been because the smoke actually made me sick (headache and nausea). We are, however, enjoying our newfound living room and it makes it feel much more like a real home. 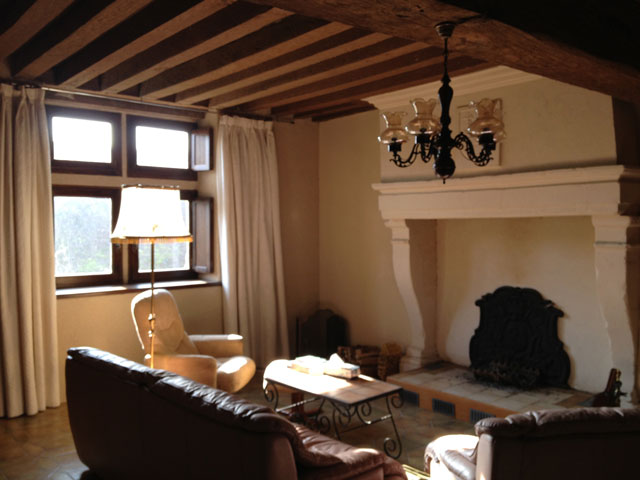 I nearly forgot. We went to dinner at Au Coin d’Table on Saturday night after the wrong sofa episode. I phoned and made a reservation. When we got there, however, there was no trace of it. It turns out there is a restaurant called “Le Coin de Table” in Tours (an hour away) and I made a mistake when I looked up the number in the Yellow Pages. I suspect it isn’t the first time because I remember this happening another time. I phoned the other restaurant to cancel of course. The lady found it most amusing! 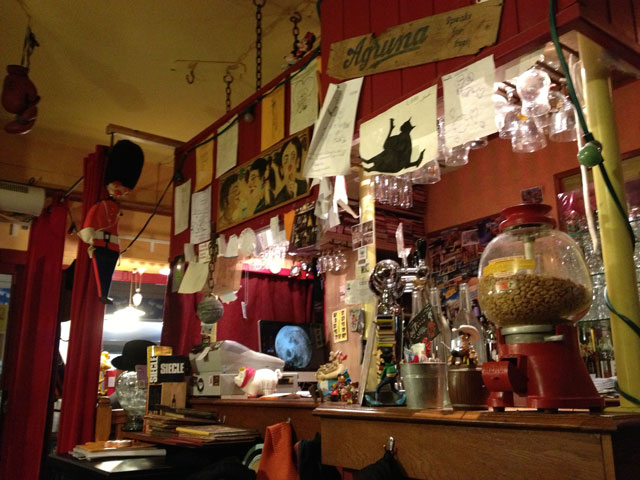 9 Responses to Why the Fireplace Smokes and Other Annoying Things