This week’s Blogger Round-Up takes us to Lisbon in Portugal with Jenny and John in Brittany, a place that is definitely on my shortlist while Adelina from Pack Me To visits the inside of the Parliament Building in Budapest which we didn’t see on our visit to Hungary last summer. Margo Letsz from The Curious Rambler, whom you met last week explains the importance of being polite in France, which you may remember from my post on bonjour. Enjoy!

Things to see and do in Lisbon, Portugal

by Jenny and John in Brittany, who recently left Stockport, England to live in France where they are renovating a house to create a B&B. 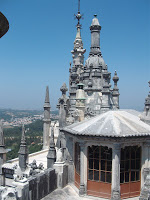 Lisbon is an amazing city, there is so much to do and so many places to visit, I am not going to go into much detail as the pictures say more than a thousand words.

The one thing I would recommend though is to go on the trams, we did not work them out and just jumped on one we saw, you can pay on the tram or get a day pass (the day pass is highly recommended as this allows you to travel all day and costs approx the same as two rides when you pay on the tram).

We travelled to the end of the line and then back again, the tram ride is fascinating as at times you can touch the buildings you are passing it gets so close. Read more

Inside the Hungarian Parliament Building 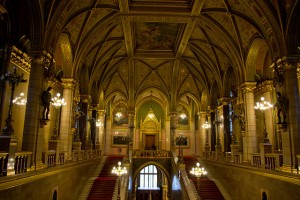 Visiting the Parliament building in Budapest has been on my to do list for a long time. I had seen photos of the inside of the Hungarian Parliament building, which looked spectacular, and I wanted to see it for myself. A building that looks so magnificent on the outside is sure to look glorious inside right? I was not wrong.

I had a bit of a false start on my visit to the Parliament. The first time I went, I was informed that the tour for the day was only 30 minutes long instead of the regular 45 minutes, but the price was the exactly same. I decided to go back another day. Read more

It pays to be polite in France

by Margo Letsz from The Curious Rambler, who lives in Nice, France where she likes to bask in the sunshine, study the French language and blog

At this café in Nice, France, minding your manners can significantly reduce the price of your coffee. 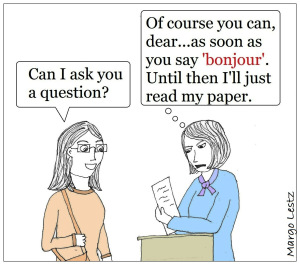 Of course, this was meant as a humorous way to remind customers to be polite, but it’s a great illustration of the French attitude toward good manners.

In France the “courtesy words and phrases” are very important and NOT optional.  Fortunately, they’re easy to master, but if you can’t manage them in French, at least say them in English.  More than likely, the French will understand you and think that you’re a polite person who doesn’t speak French – which is, of course, much better than being thought of as a rude person who doesn’t speak French. So if you want to be polite in France (and I’m sure you do), here are some easy words and phrases (along with my attempt at phonetic pronunciation) to help you on your way. Read more