I haven’t been publishing the usual Wednesday’s Blogger Round-up for the last month because I simply didn’t have time to read any other blogs! Cycling and visiting all day and writing posts at night took up a good part of every 24 hours.

Although we arrived back on Sunday night just in time for Bastille Day, we decided to pass on it this year but Mary Kay from Out and About in Paris took some of her usual stunning photos. Meanwhile, Sylvia from Finding Noon was off on a Greek Island, eating lobster and discovering a wonderful English library. While we’ve been cycling along the Danube, Maggie LaCoste from Experience France by Bike has been bicycling through Provence. Enjoy! 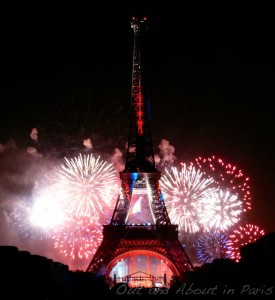 There was a REVOLUTION of sound and explosions on the Champ de Mars last night. If you would like to relive Bastille Day (La Fête Nationale) 2013, here’s the spectacular firework show in its entirety! Read more

On the third day she rested… 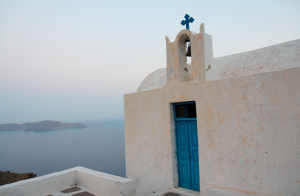 Not that I’m comparing myself to the Great Creator, but s/he created the world in 6 days before taking a break, where as on holiday in Santorini, Greece last week, I only made it to three before needing a holiday from our holidays.

When I told a friend our destination she gave me a rather dry look, adding, “You know, you can’t wear heels.” The map of the nearest big city had a “No Heels” logo on its legend.  What wasn’t explained, and what I didn’t ask, is why. Read more

by Maggie LaCoste from Experience France by Bike, an American who loves biking anywhere in Europe, but especially France, which has the perfect combination of safe bike routes, great food, great weather and history. 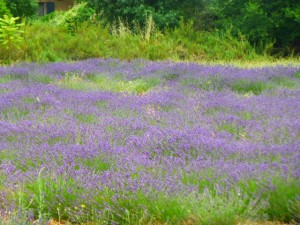 Provence is a very easy place to fall in love with, and a very difficult place to leave. Four days here was only enough time to confirm that I should have planned on staying no less than a couple of weeks! Even though it never rains here in the summer, it rained in Bonnieux this morning. Maybe the rain was supposed to help me not feel so bad about leaving. But as I watched the fog settle over the hills, it made me want to stay even more. I was dreading the 7 km downhill ride on wet pavement. Read more

This entry was posted in Cycling, Food, France, French customs, Paris and tagged cycling in Provence, Experience France by BIke, Finding Noon, Out and About in Paris. Bookmark the permalink.