Posted on September 23, 2013 by Rosemary Kneipp

We wake up very late and I am relieved that my toe is no longer swollen and painful. I can now move it which is reassuring. The Nurofen, the three ice-cold foot baths and not going out for dinner and walking on it again yesterday seem to have worked. Alexander Nevski Cathedral and Saint Sofia are on the programme today. 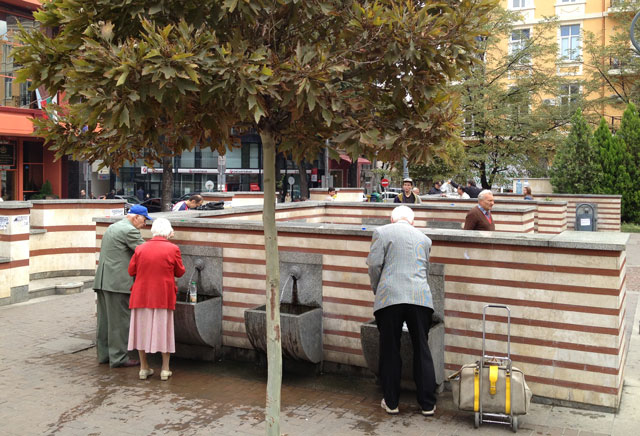 People filling bottles with spa water near the old Baths

The  first thing we do is to go back to the Baths to find the warm mineral water springs where the locals apparently form long queues. There are no queues today but quite a lot of people are filling up water bottles of all shapes and sizes. We test the temperature and it does indeed seem to be 37°C. Maybe I should get some for my toe! 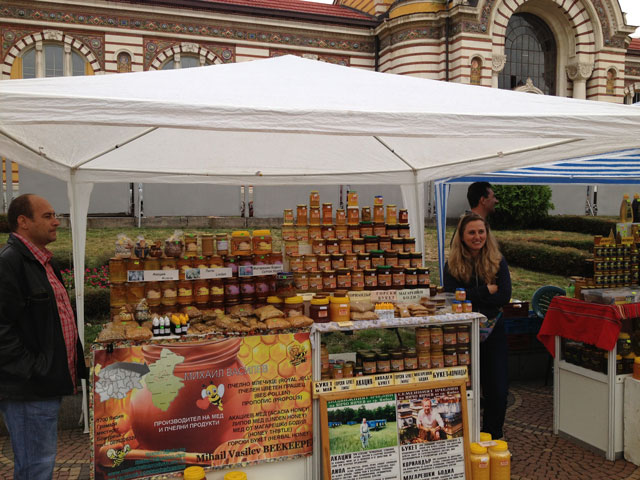 The honey market in front of the old Baths

Just next to the springs is a honey market. Yes, just honey – about 25 to 30 stalls. It turns out that honey is very popular in Bulgaria and this is honey week. 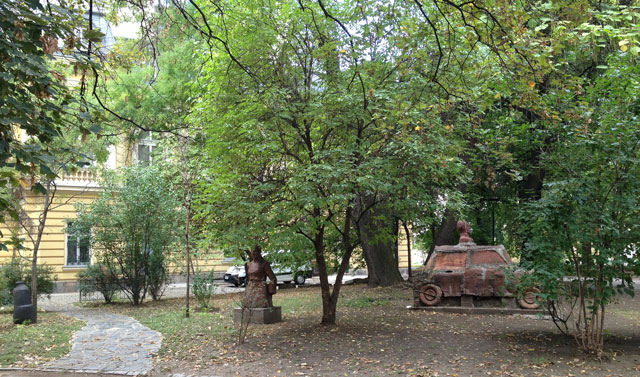 This time, we walk behind the former Tsar’s palace, now the National Art Gallery, towards Alexander Nevski’s Cathedral. The park behind the gallery has a lot of outdoor sculptures, some very modern. 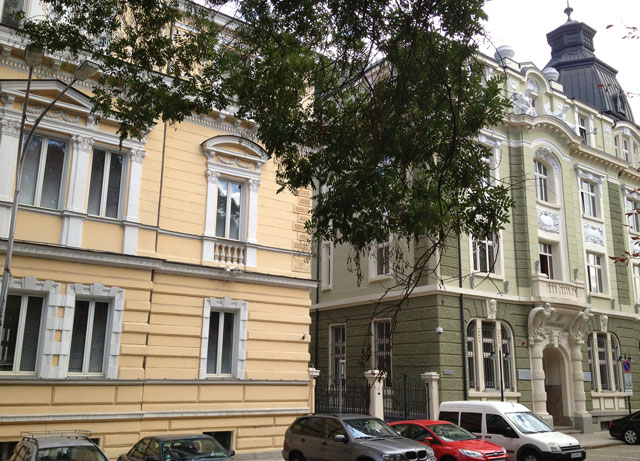 The Viennese-style houses lining the street are in much better repair than the ones in our neighbourhood. 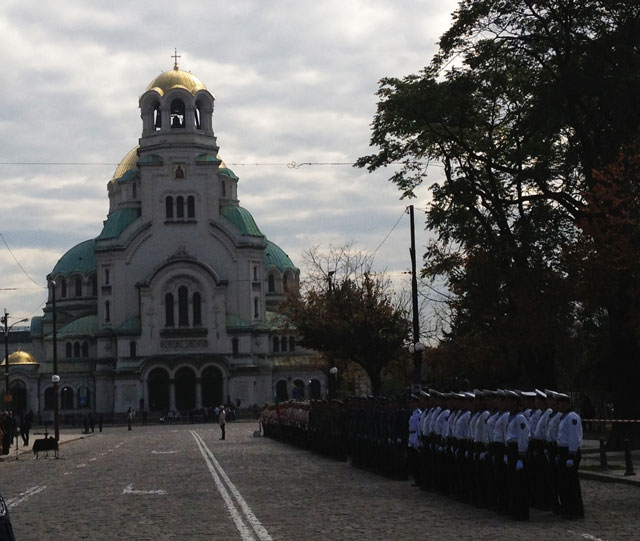 As we near the Cathedral, which is just next to the church of Saint Sofia, we see that something is going on and we can’t access the church. There are rows of soldiers in different uniforms and people are crowding towards a podium. Soon, someone starts speaking over the PA system and an official-looking man starts walking past the soldiers.  I am later informed by an American tourist who’s part of a group that it’s the feast day of Saint Sofia and the man is the Mayor but it turns out this is incorrect because the current mayor is a woman: Yordanka Fundakova. 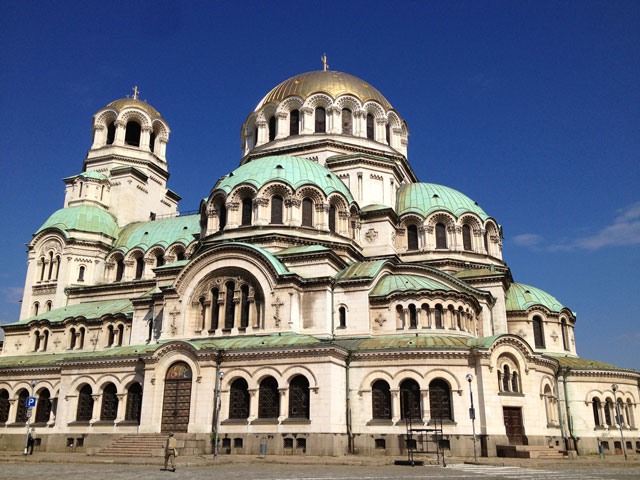 We head off down the road behind Saint Sofia to Alexander Nevski Cathedral. Built between 1882 and 1912 in the neo-Byzantine style typical of 19th century Russian churches, it is quite spectacular with its green and gold domes. Seventy-six metres long and 53 metres wide, it is said to up between 5,000 and 7,000 people. 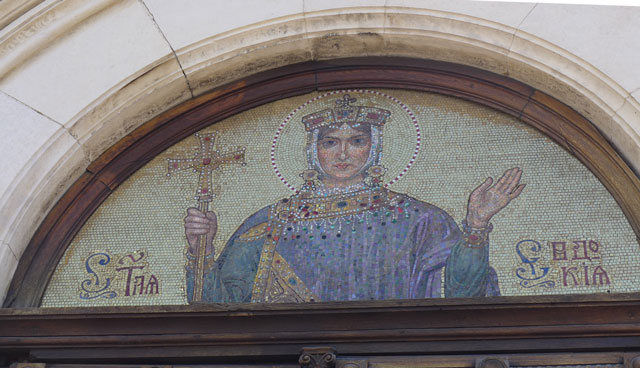 Close-up of the tympanum on Alexander Nevski Cathedral

It takes a while for our eyes to adjust to the light inside. We can finally see the beautiful murals. The ones closest to the cupola are being renovated and the colours are quite striking. Photographs of the inside are not allowed unfortunately so I can’t show you. There are three altars and people are standing in line with a candle in their hands to touch the icons. 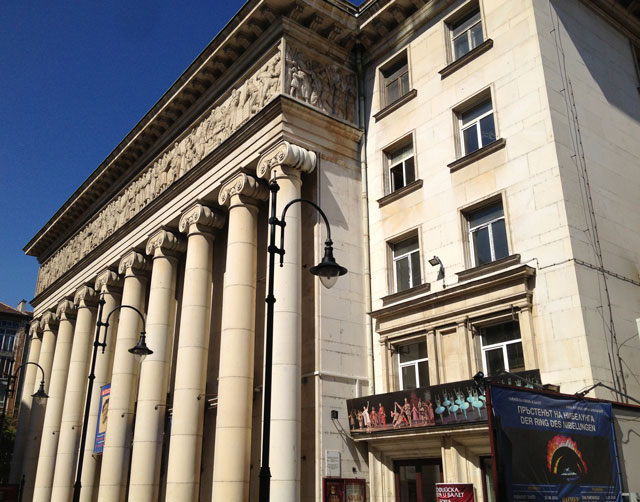 After leaving the cathedral, we walk towards the Opera house on the corner of Rakovski and Vrabcha Streets, a perfect example of Stalinian architecture with its enormous columns and friezes built in 1950. 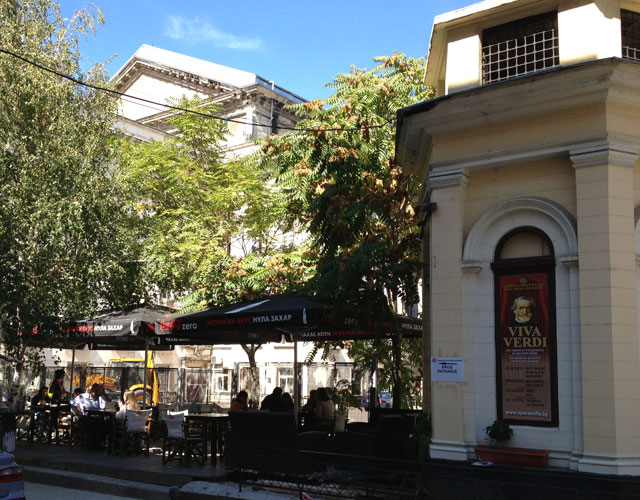 The AHTPE restaurant near the Opera House in Vrabcha Street

We find a restaurant called AHTPE (well, in Cyrillic anyway) close by, with a terrace next to a construction lot. Fortunately the pneumatic drill stops while we’re eating. A much better choice than yesterday with fresh grilled trout and salad with an 18 cl bottle of wine each for 30 leva. As an added bonus, while we’re eating, the chorus in the Opera House next door is practising. 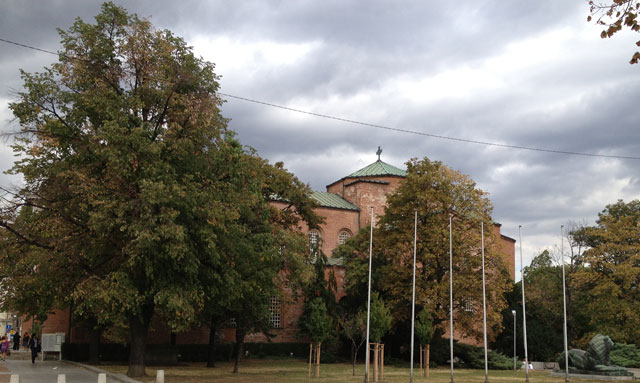 By the time we have finished, the festivities at Saint Sofia are over and we’re able to visit. The simple red brick church is the oldest Eastern Orthodox church in the capital and dates back to the 5th and 6th centuries. During Ottoman rule, it was turned into a mosque but after the minaret was toppled in 1818 during an earthquake and the Imam’s  two sons were killed in a second earthquake 40 years later, it was abandoned and restored as a church after liberation. 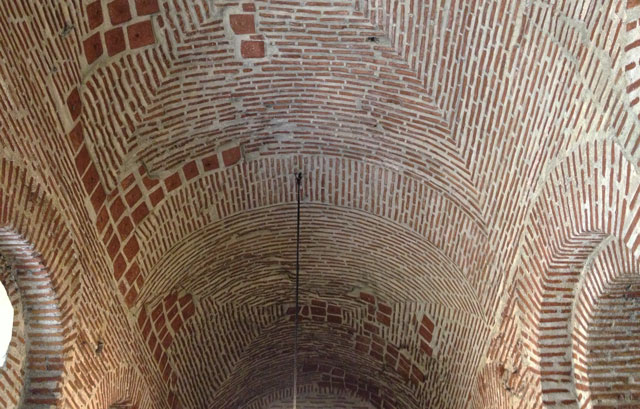 The crypt below is far more interesting and a real labyrinth, explained by the fact that the current church is the fifth to be built over the ancient necropolis of the Roman town of Serdica. There are several murals and mosaics. We go through the whole crypt twice because Jean Michel says we’ve missed some mosaics but we still can’t find them. 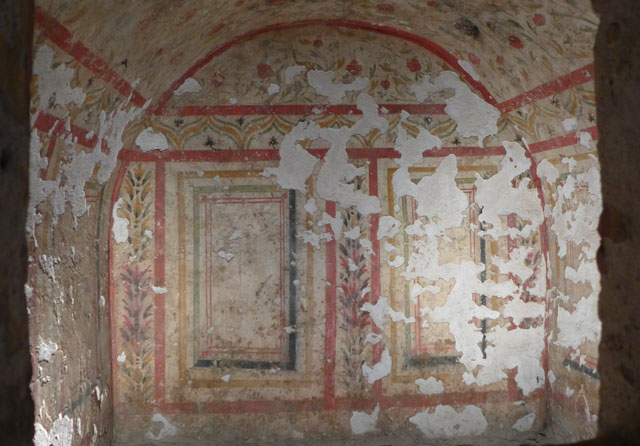 Mural in the crypt underneath St Sofia

When we come out, we walk through yet another market, this time a local flea market. 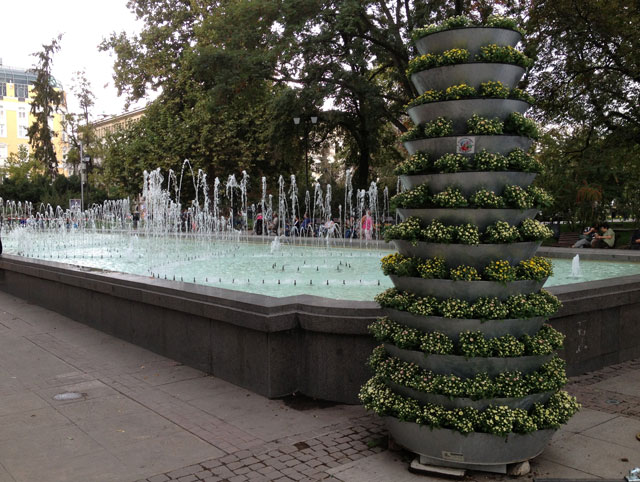 We go home via the Theatre and what should I see near the fountains by another of Susan’s Daleks which is, in fact, a tiered planter with little white flowers up the sides!