Posted on September 17, 2013 by Rosemary Kneipp

The first thing I do when I wake up is to slip on the tiled threshold of the bathroom and seriously bruise and sprain my big toe as I grip the edge of the tiles with it in a fortunately successful attempt not to fall over completely. How stupid can you get! We set out nevertheless  on tour n°2 of the 2008 Insiders’ Guide to Sofia published by the Tourist Office and provided by our lovely home exchange hosts whom we met briefly in Paris. 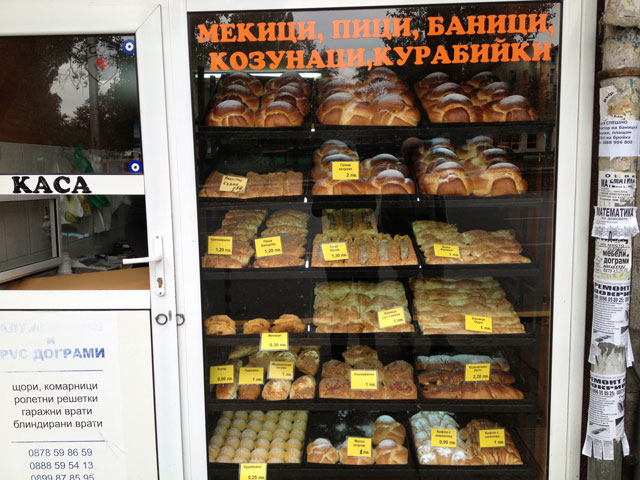 It’s unexpectedly overcast and cool. The poverty is even more obvious on the main street. We are the only tourists around. I stop to take a photo of a bakery and the young man coming out offers to pose but I’m not quick enough. The owner quickly disappears inside. 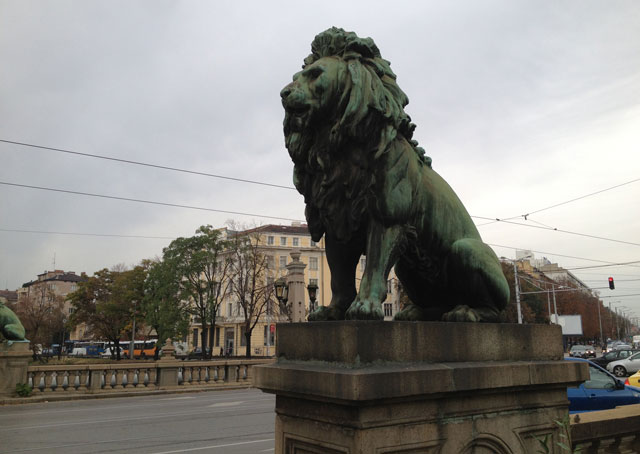 We come to the famous Lion Bridge, with its four lions symbolising Bulgaria, and are surprised at the meagre stream below, Vladarska Reka. 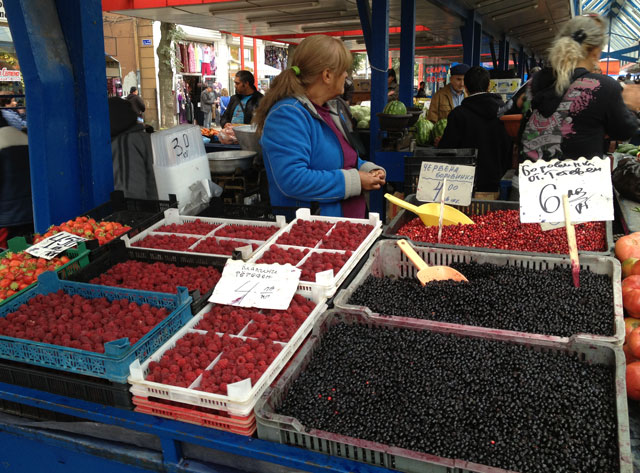 Berries at the Ladies’ market

After taking a sharp turn left, we wander through the back streets to Zhenski Pazar, the Ladies’ Market, Sofia’s biggest and cheapest market, where the women used to sell any extra fruit and vegetables of their own production during the Communist era. Today, it is a normal market selling mainly local produce, all at the same price. We buy some grapes at 1.20 leva a kilo (about 60 Euro cents). 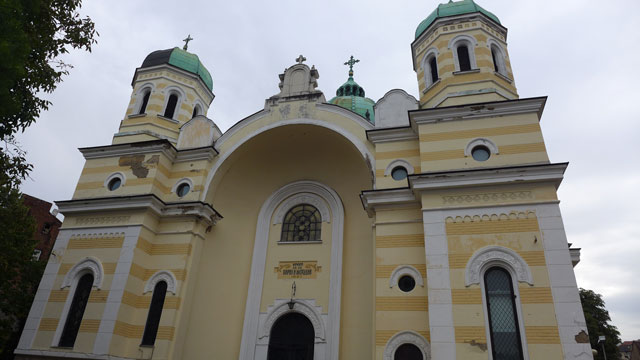 The church of Saint Cyril and Saint Methodius comes unexpectedly into view. It was built at the turn of the 20th century in honour of the two Greek brothers and monks who created the glagolithic alphabet later reworked by Saint Clement of Ohrid to form the Cyrillic alphabet with its 30 letters used in Bulgarian that I really need to learn ASAP. 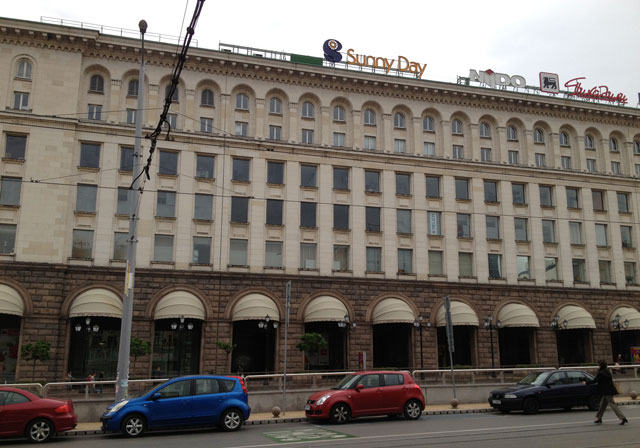 We take Ekzarch Josif Street, past the synagogue we saw yesterday, then onto Maria Luisa Boulevard with its restored market or Halite, not nearly as interesting as the one we’ve just been to. We pass the mosque and central baths from yesterday. 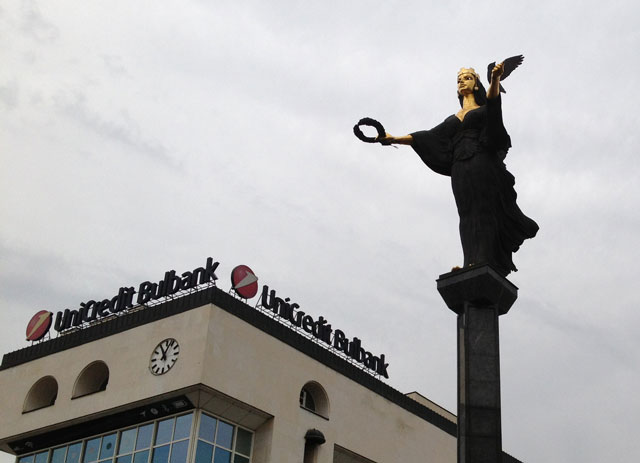 I look up and see a large winged statue. across from TZUM which contains a department store and the Sheraton Hotel.  The 24-metre high bronze and copper sculpture erected in 2001, weighs four tons. Sofia holds the symbols of fame and wisdom in her hands and wears the crown of Tjuhe, the goddess of fate. 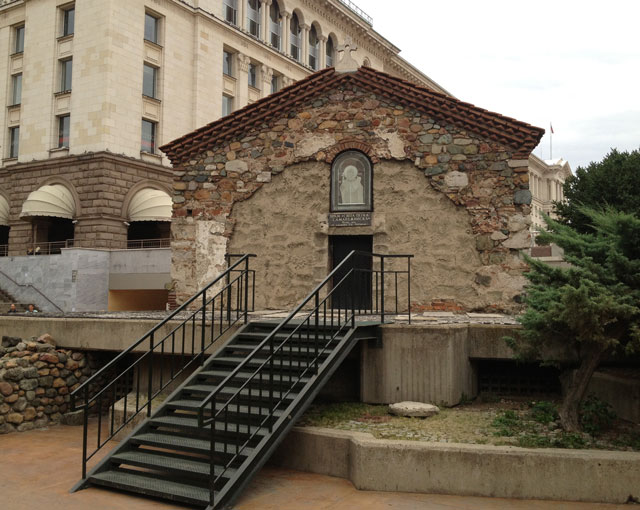 “Are there any old buildings left in Sofia”, I ask. “We’re just coming to one”, replies Jean Michel. We use the underpass to go to the other side and come to the tiny church of Sveta Petka built in the 14th century. It’s hardly visible from the street because under Turkish rule, churches were only allowed if they didn’t rise higher than ground level. 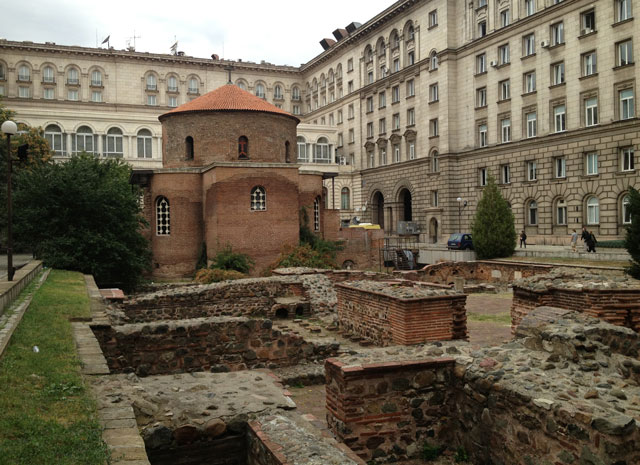 Just round the other side of the Sheraton, we come upon the St George Rotunda, set among the excavations of ancient Roman ruins. It was built in the 4th century and consecrated a century later. Three layers of 10th century frescoes are still visible but like churches everywhere in Bulgaria, photographs are not allowed inside. However, you can see some on the church’s official website. 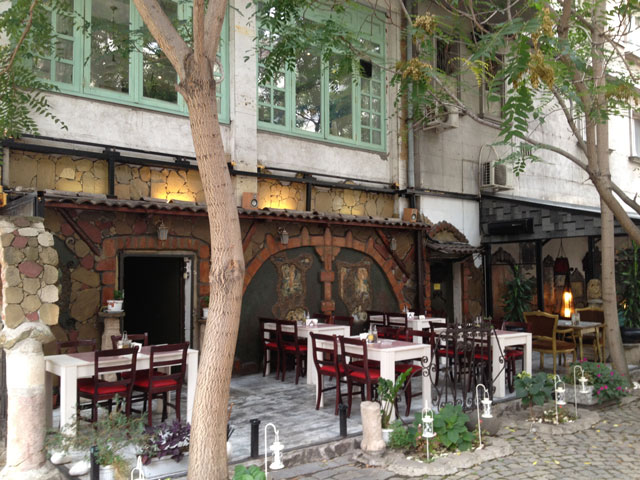 We have a cappuccino in a tiny little café opposite, aptly called the Rotunda, that has no fewer than four Orthodox priests. There seem to be very few bars and cafes that are not Italian or American and I’m delighted to discover this one. We learn from the Routard that the owner is French-speaking … My toe is beginning to get very painful so it’s a welcome break. 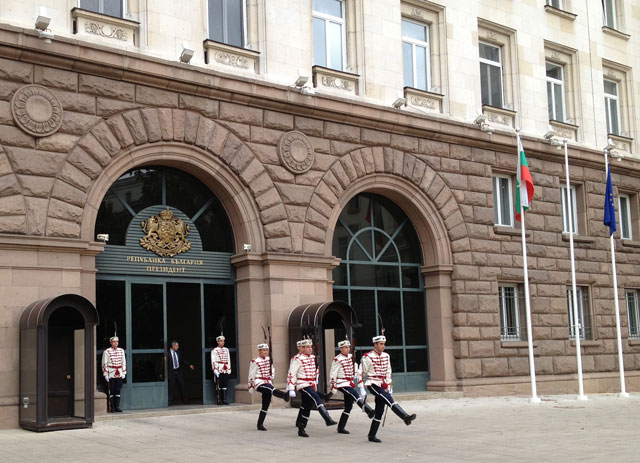 Changing of the guard in front of the Presidential Palace

Just through a passageway on the opposite end of the square under the Presidential Palace, we come upon the changing of the guards, which takes place every hour. It is exactly midday so we’re very happy with our accidental timing. 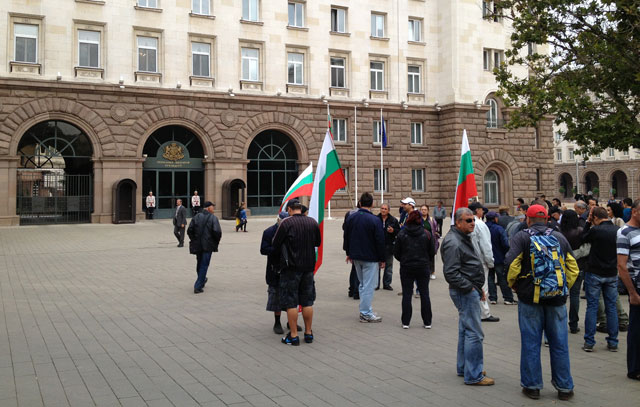 Demonstration in front of the presidential palace

A peaceful demonstration of some kind is taking place at the same time. We can’t, of course, find out what it’s all about. That brought us to the end of Tour n°2. Stay tuned for n° 3.

This entry was posted in Architecture, Sightseeing and tagged Sofia. Bookmark the permalink.