Posted on January 3, 2014 by Rosemary Kneipp

I couldn’t resist the temptation to take a look at new year’s greetings in France particularly since I overheard my father-in-law explaining the tradition of mistletoe in France to Jean Michel and it didn’t seem very clear to me so I checked it out. 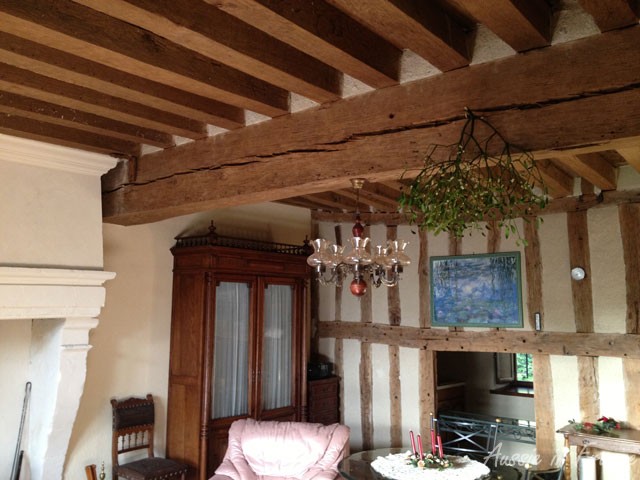 There are several different explanations but it seems that the Druids used to say o ghel an heu, meaning “may the wheat germinate”, when they cut the sacred mistletoe at the winter solstice. This seems to have gradually muted into kissing under the mistletoe at new year and saying au gui l’an neuf which is a corruption of the original Celtic expression and doesn’t have any obvious meaning on its own. I’ve never actually heard anyone say it.

Later, the expression became Bon an mal an, Dieu soit céans, i.e. good year, bad year, may God be with you. By itself bon an mal an means on average as in our expression taking one year with the other. Bon an mal an, l’immigration se maintient au Québec = Immigration in Quebec is about the same each year.

Nowadays the most common new year expression is bonne année ou bonne et heureuse année often followed by et la santé surtout as you get older and health becomes more of an issue. You wish people bonne année the first time you see them throughout the month of January. You can also say meilleurs vœux (best wishes), je vous souhaite une excellente année 2014 (I wish you an excellent 2014), que vos vœux les plus chers se réalisent (may your dearest wishes come true). Santé, joie and bonheur (health, joy and happiness) are usually in there somewhere as well. Jean Michel’s favourite is Bonne année et bonne santé physique et morale. He says that way he’s covered everything.

Note that you don’t say nouvel an except when you’re referring to new year’s eve or new year’s day e.g. je vous verrai au nouvel an : I’ll see you at New Year or nous avons fêté la nouvelle année en famille : we celebrated new year at home. A new year card is une carte de nouvel an or une carte du nouvel an but it’s probably more correct to say une carte de vœux de/du nouvel an. You don’t see them much any more but when I moved to France in 1975, people used to send tiny cards about half the size of a normal envelope.

Something I find interesting is that Jean Michel never bothers to contact his family at Christmas but makes sure that he talks to everyone on New Year’s day. For me and my Australian family, it’s quite the opposite. Christmas is more important.

And there is an unwritten rule that the younger members call the older members first. As Jean Michel’s the oldest, he only has to call his father.When I sent messages to both my children at midnight on New Year’s Eve this year, he was quite surprised that I didn’t wait until they contacted me.

Today the galette des rois or kings’ cake is probably the greatest symbol of the new year in France. A galette was originally a buckwheat pancake from the country of the Gauls (Gallois) and by extension any thick, flat cake or biscuit. I’ve described the tradition of the galette des rois in another post. Today I’m only looking at the linguistic aspect. 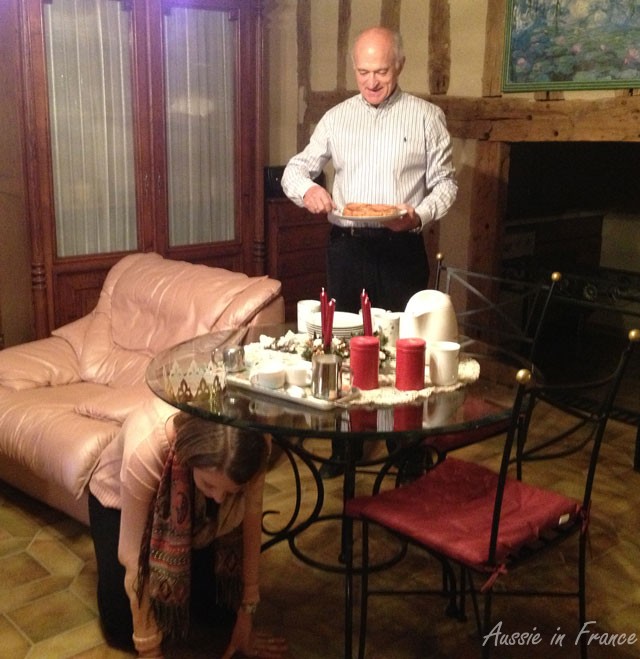 The youngest person sharing the galette goes under the table and indicates which piece is for whom to the person cutting and serving it.

A popular expression connected with the galette des rois is tirer les rois. Tirer means to draw stakes, so tirer les rois means that people are going to share a galette and see who gets the token or fève inside.

But each region of France is different so you may know of other new year traditions.

This post is a contribution to Lou Messugo’s All About France link-up. Feel free to pop over and have a look at the other posts this month by clicking here.