Posted on January 5, 2012 by Rosemary Kneipp 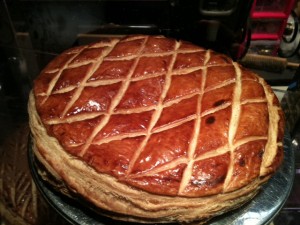 When I first came to France, the galette des rois was only celebrated on the feast of the Epiphany, the famous 12th day of Christmas, January 6th, the day on which the three kings reached Bethlehem. Now you see the first galettes at New Year and you can buy them right up until 31st January. A galette is a flat cake and the word is also used to describe buckwheat crêpes. 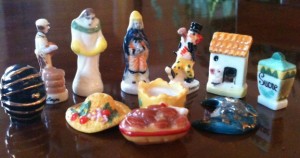 They are two types of galettes des rois: fourrée and non fourrée, meaning that they contain almond cream or are plain. Leonardo disliked almond cream up until recent years so we always bought the plain one, which caused problems among adepts. I can remember one friend actually buying a second galette when I said I’d bring the galette to her house, just in case I only bought the plain sort! Our friendship was short-lived. 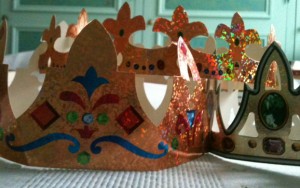 The quality of the galette depends on the bakery or pâtisserie you buy it from. It’s basically flaky pastry with a thick pasty almond cream (called “frangipane“) containing a fève or broad bean and is sold with a cardboard crown. Today, the fève is a small plaster or porcelain figurine that can represent anything from a traditional baker to a Disney character. The crowns can be anything from a basic gold affair to something more elaborate and colourful. Usually the more expensive the galette, the more original the fève and crown will be. When the kids were little, they used to make their own. 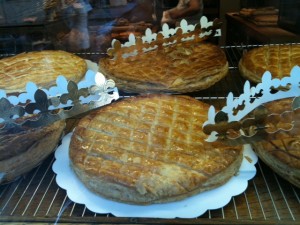 Traditionally, the youngest child gets under the table. The galette is cut into as many pieces as there are guests. The person under the table then indicates who should get each piece. This was Black Cat’s prerogative before I met Relationnel. After that, it was Thoughtful, as the second twin to be born, who would go under the table. This year, we had our first galette (a little early) with my Australian cousin who is a few months younger. When Brainy Pianist comes back from holidays, it will be his turn. It’s very amusing to see these tall teenagers disappearing under the table!

Whoever gets the fève then chooses a king or queen. When the galette is shared among friends, the person with the fève has to buy the next galette so you can see why it could go on forever. The galette is better when you can warm it in the oven. I’ve tried making my own, but flaky pastry is a tedious affair and even if you buy the pastry ready made, I still prefer the almond paste in the ones from the bakery.

Sharing a galette des rois is popularly known as tirer les rois, where tirer means to draw stakes. We usually accompany it with apple juice and cider but that may just be our own tradition.