A Sunday Walk Through the Marais in August

We’ve just had a lovely visit from of my former ESIT students now living in Maryland, with her husband and little Ada, which is my mother’s name. The weather is not brilliant so we decide to forego a visit to the Villette version of Paris Plage as planned and walk towards the Marais. 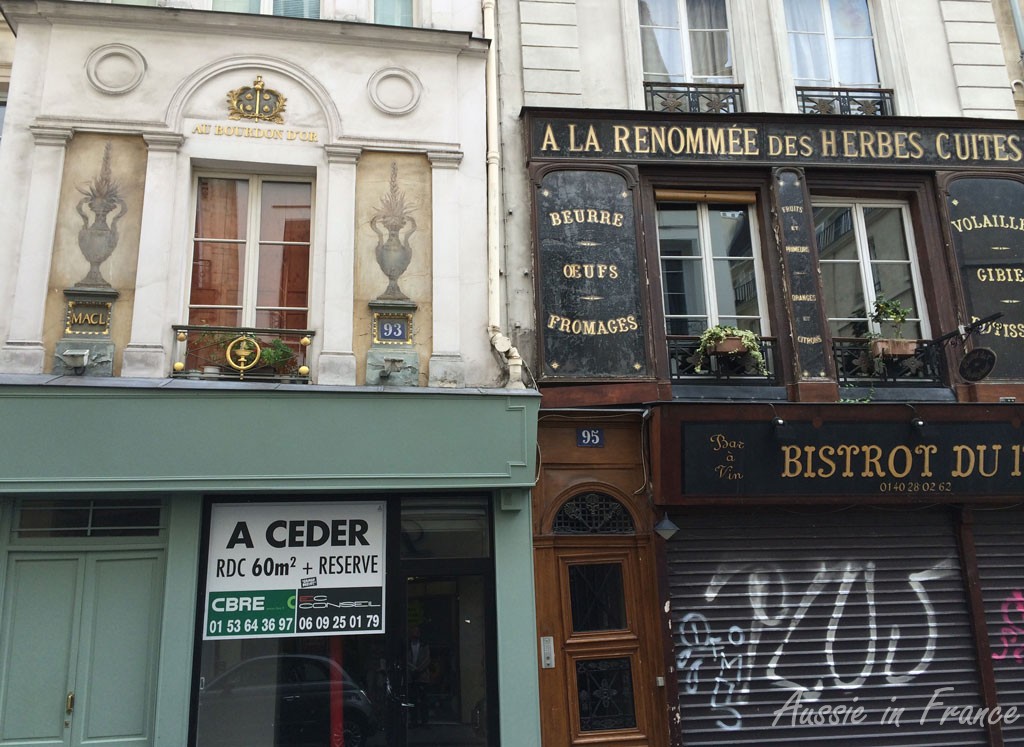 As we walk down rue Saint Honoré, which we must have done a hundred times already, we notice two façades we’ve never seen before even though we’ve eaten several times at the Bistrot du 1er. 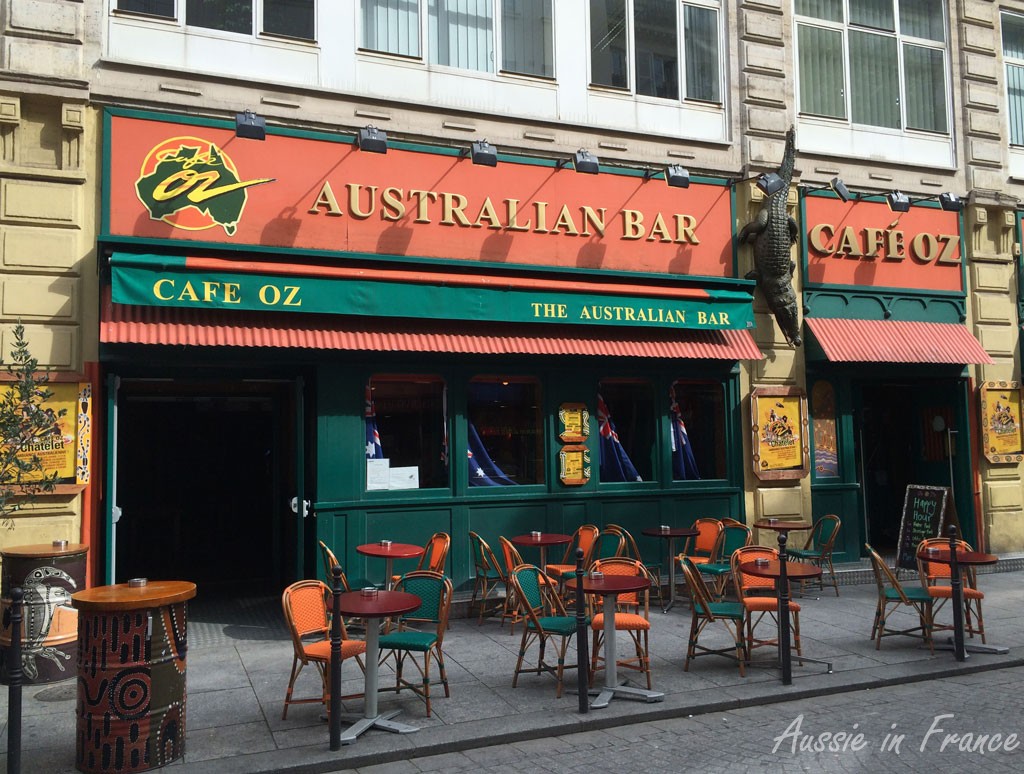 A short while later, I spy Café Oz off to the right in rue Saint Denis. The last time I saw Café Oz it was on the other side of the river – now there are three of them! www.cafe-oz.com. 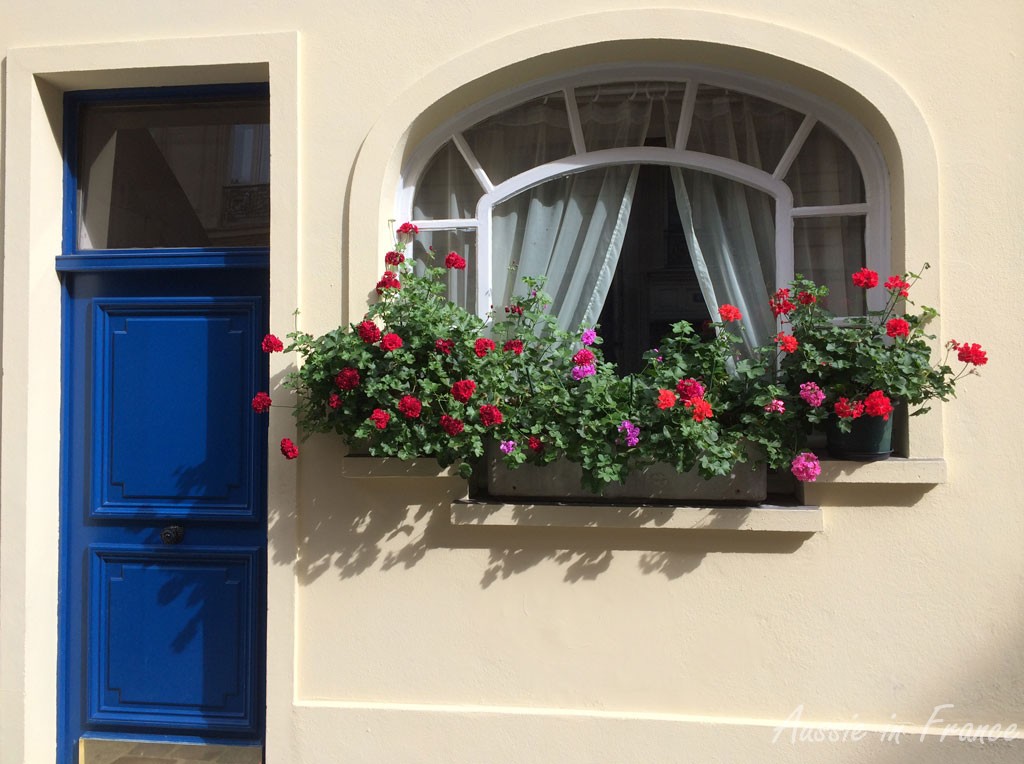 We are intrigued by all the window boxes of geraniums. How do they do it in the middle of Paris when I only have very mediocre success in Blois? We are also amazed at just how many people there are! August is supposed to be empty. On rue Vieille du Temple, we come to a quiet little cul-de-sac with a village feel to it and an Australian Ugg shop on the corner. Now I know where to buy my winter slippers. 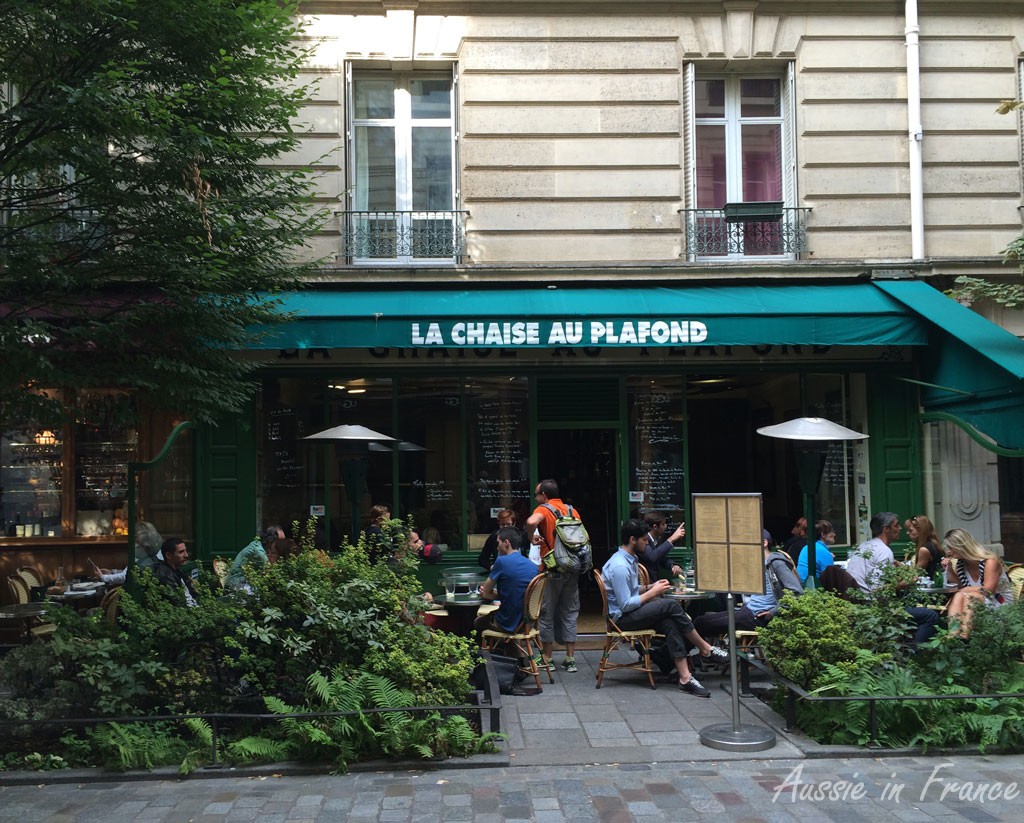 La Chaise au Plafond (the chair on the ceiling!) in rue du Trésor off rue Vieille du Temple opposite Ugg

In the Marais, immediately recognizable from all the Yiddish signs everywhere and the throngs of people, we stroll into the Jardin des Rosiers and out the other side through the Maison de l’Europe de Paris which has a giant Easter egg, painted by Croatian naive artists in the courtyard. 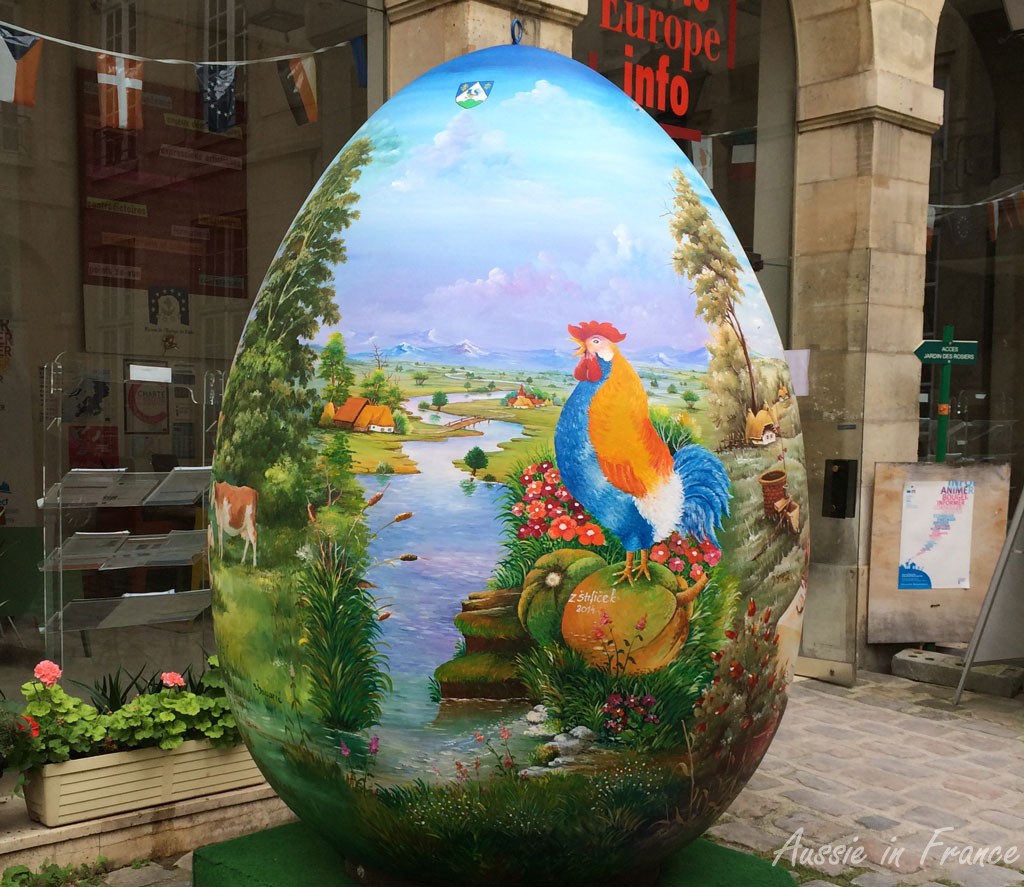 We can also see a large brick chimney that we later find used to be a factory for extracting gold, silver and platininum from jeweller’s dust. The Marais of course was once full of Jewish jewellery shops. 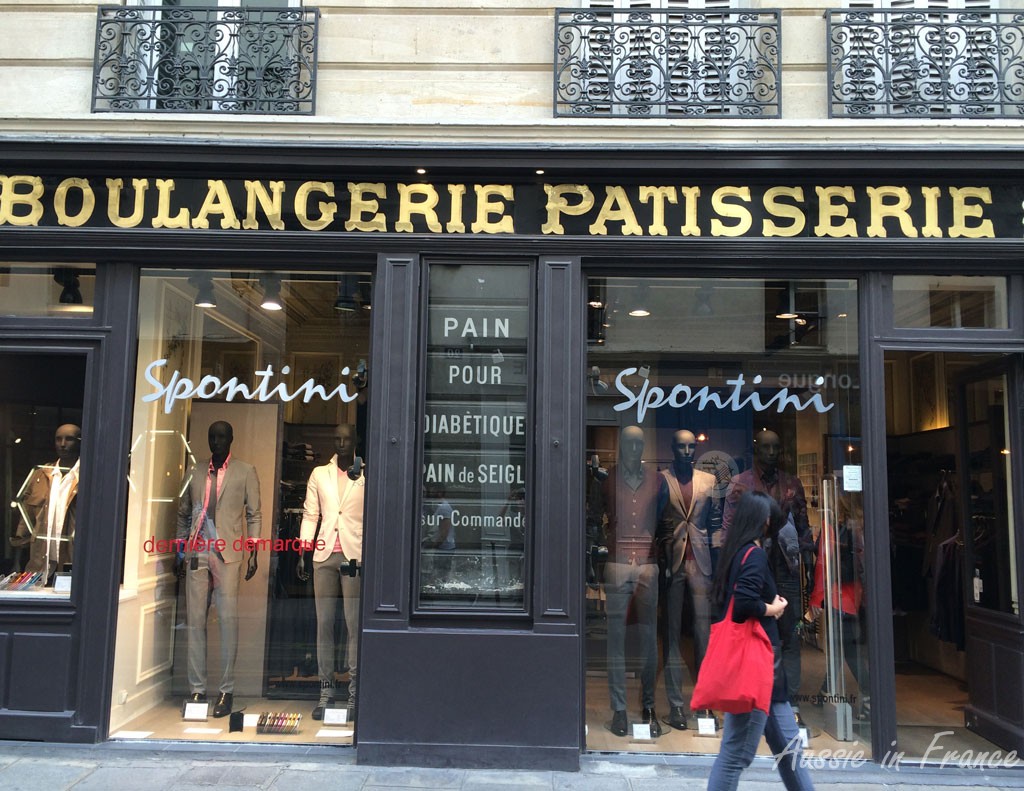 Spontini in an old bakery on rue des Francs Bourgeois

It’s amusing to see that Spontini is now in a former bakery that once sold special bread for diabetics. I like the fact that they’ve kept the old signs. 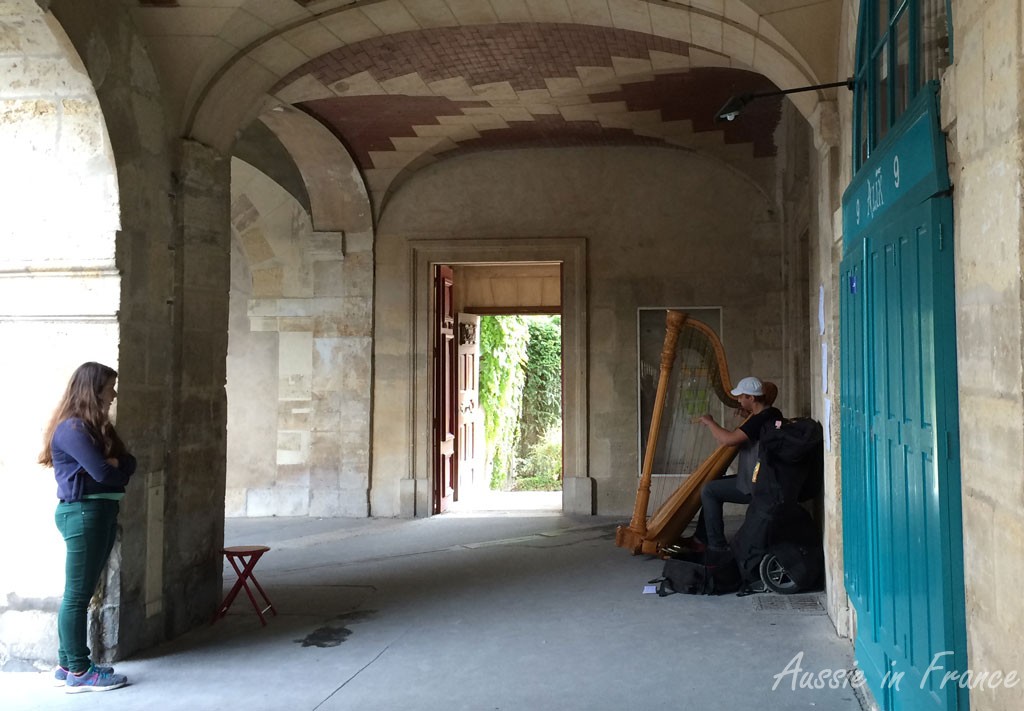 When we reach Place des Vosges, all the cafés are full so we walk along the arcade to Hôtel de Sully, enticed by the haunting melody of a harpist. 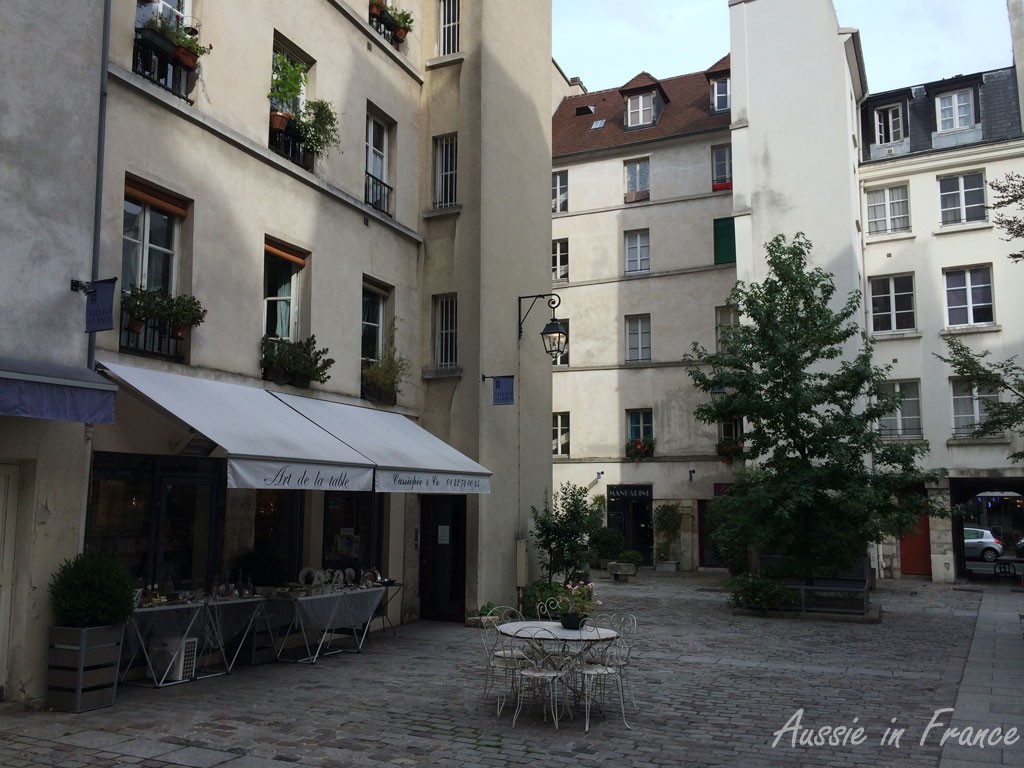 Our route takes us past several courtyards. We wander in and discover Village Saint Paul, which we’ve never seen before, but most of the boutiques are closed. 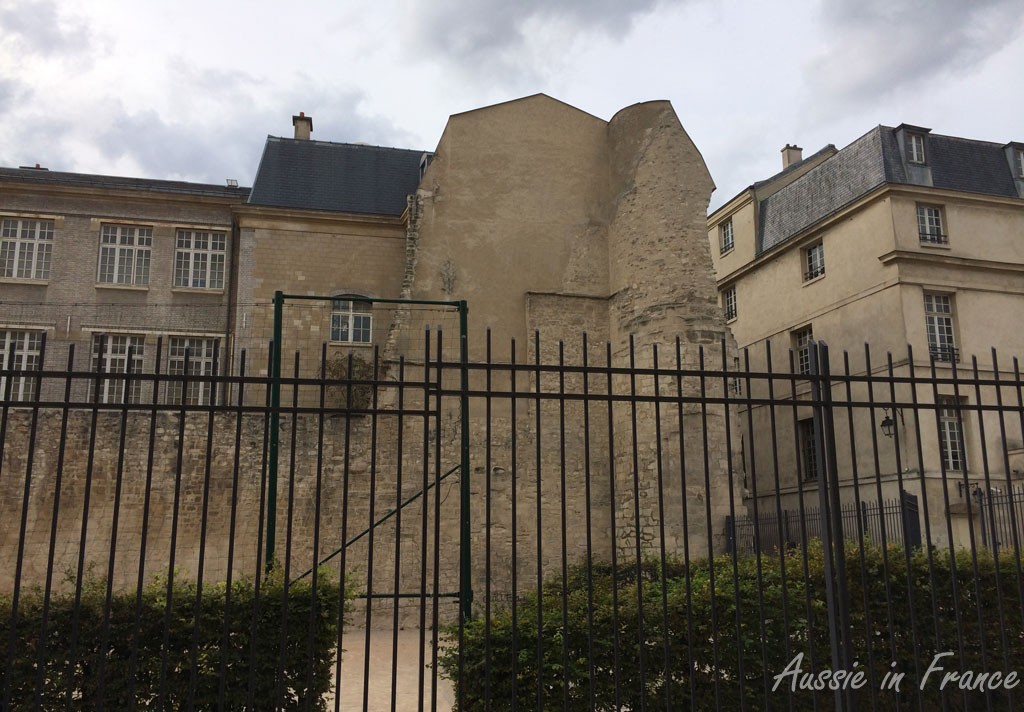 We see a large half-ruined wall which turns out to be part of the city walls built by Philippe Auguste at the end of the 12th century to protect Paris while he was off at the Crusades. We have vestiges near us as well, but they are not nearly as imposing as these. 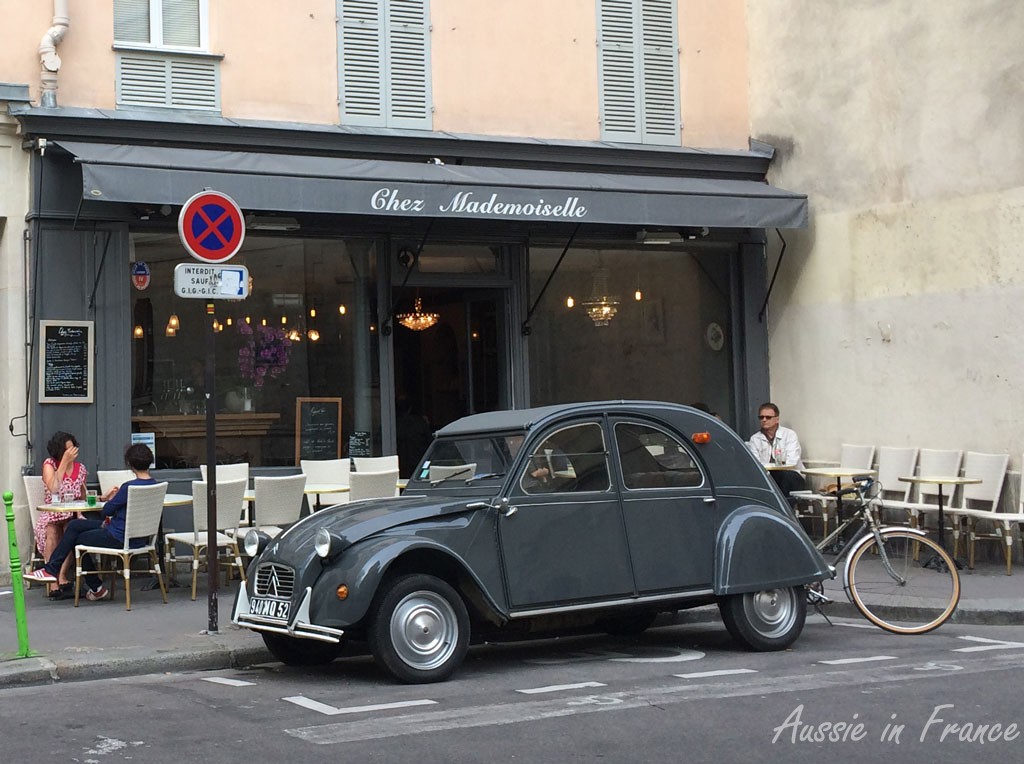 Chez Mademoiselle with its coordinated 2CV!

Further along the street, after the famous Lycée Charlemagne in Rue Charlemagne, there is a little café called Chez Mademoiselle with a grey Citroën 2CV parked in front and painted to match the front of the café. How’s that for coordination? 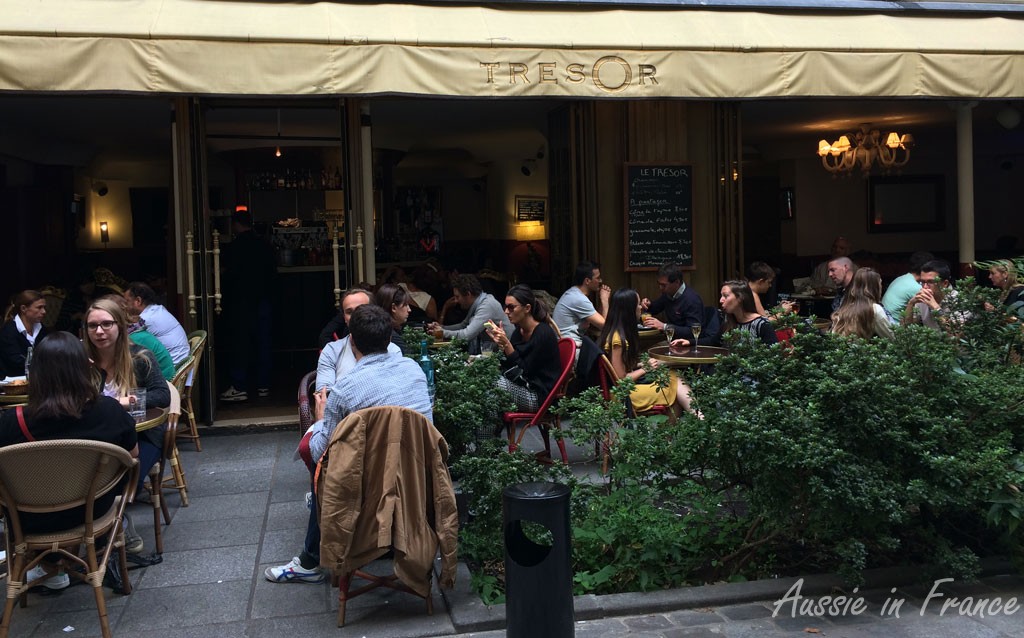 Tapas at Trésor in rue Trésor

After going past two of the oldest houses in Paris on rue François Morin, we find our way back to the Ugg shop and its cul-de-sac because we saw that Trésor is serving tapas. There is even a table for us on the edge of the inside room looking out on the terrace. It seems to be a well-guarded secret from tourists because everyone around me is speaking French. 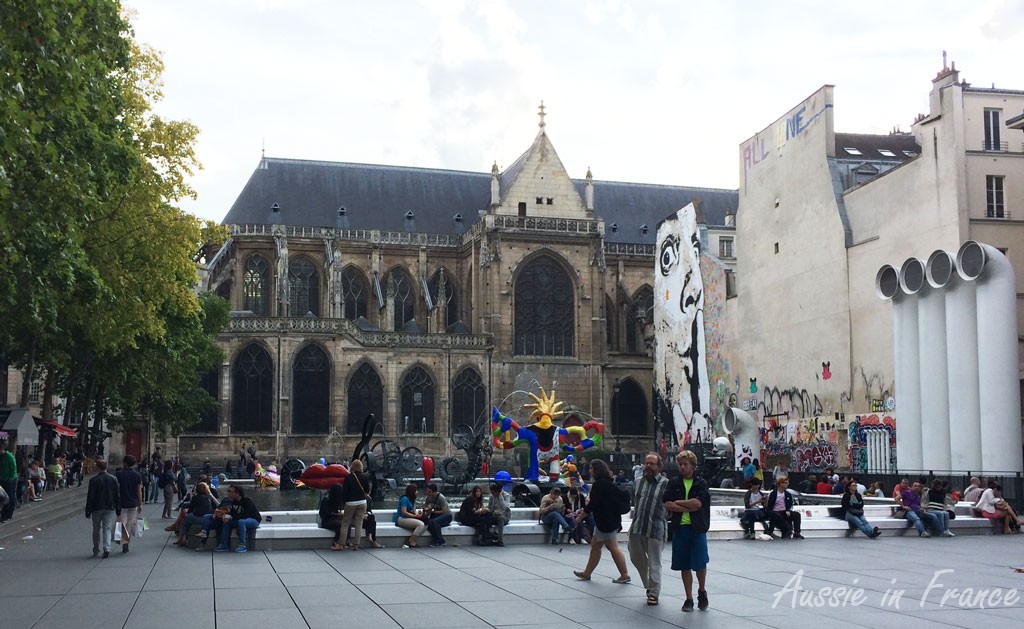 Our path home takes us past the Pompidou Centre and Nicki de Saint Phalle’s fountains that my kids used to love when they were little.  A much better promenade than last week!

11 Responses to A Sunday Walk Through the Marais in August