Old Bricks, a Cloche and a Priory

While the concrete sill on the practice window (made with our new secondhand concrete mixer) is drying, Jean Michel is planning the logistics for the two large windows in the kitchen. We’ve already bought two stone sills for the rear façade window through leboncoin.com (where else ?) but we need bricks for the side window and the barn. 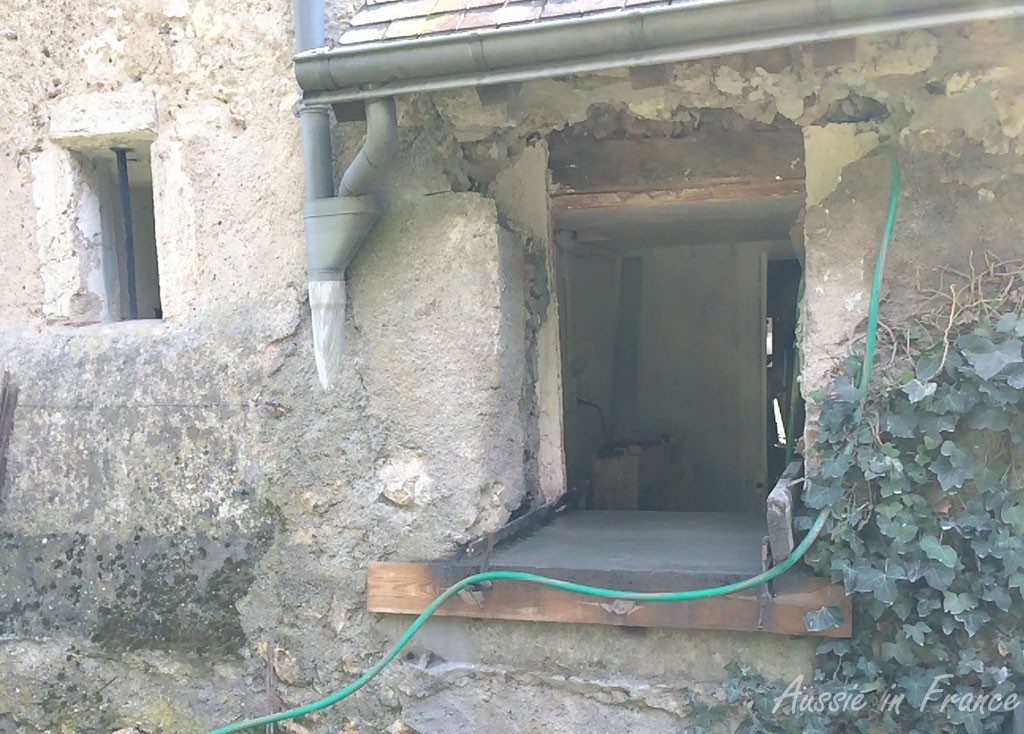 We can’t use new bricks of course as they would not blend in with the original architecture. Jean Michel sees an advertisement on leboncoin.com for 200 bricks for 50 euro. Considering that another vendor is asking 2.50 euro a brick, it seems a pretty good offer. He phones and organises to pick them up next afternoon. The vendor lives about 40 minutes away. 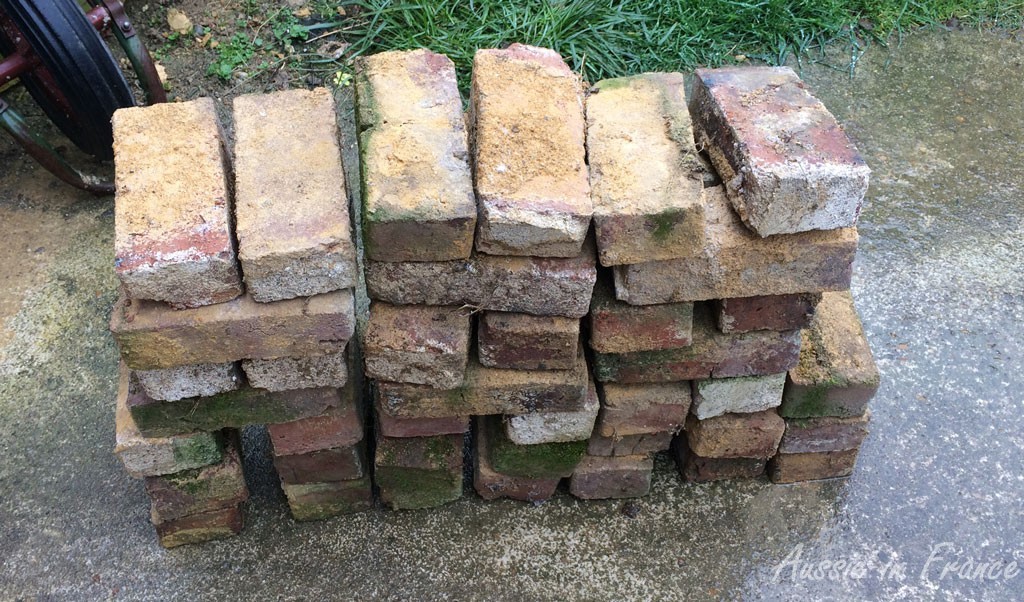 The first pile of bricks

When we arrive, we see the first stack of bricks waiting for us. We load them in the car along with another stack slaked in mud. Fortunately, it’s stopped raining. Before we go and pick up the rest from his grandmother’s house another 30 minutes away, the vendor shows us a couple of other things he has for sale, including three beautifully preserved glass cloches once used to grow seedlings. He’s selling them for 70 euro a piece but you have to take the three. 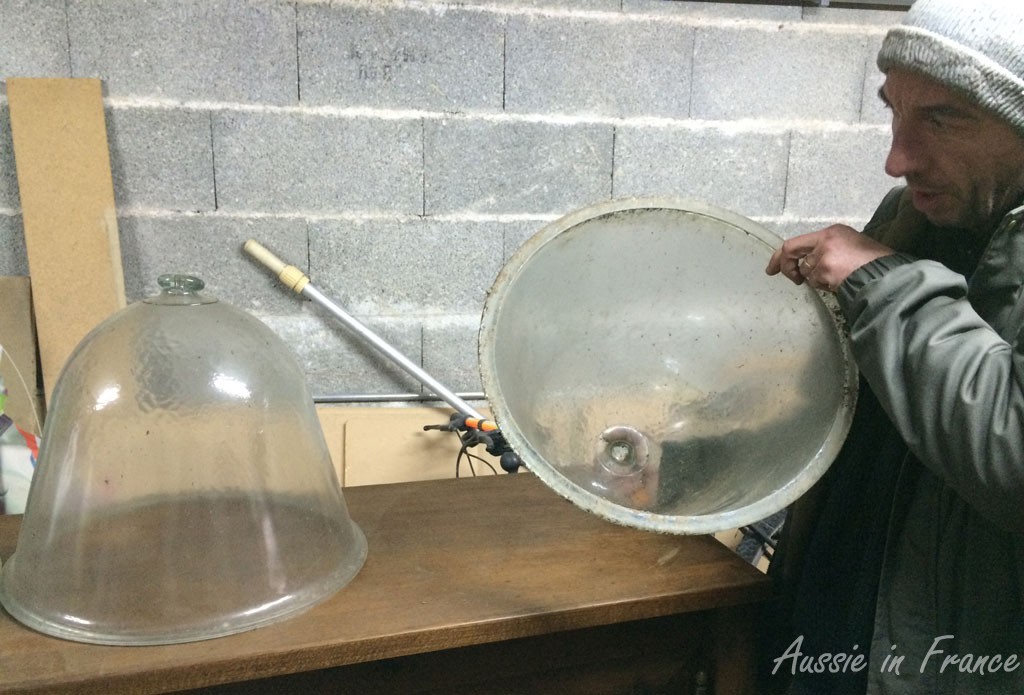 His grandmother was still living in the house until she died peacefully in her sleep last December, just 4 days after she turned 100. The house turns out to be a priory built in the 12th and 16 centuries and still has a chapel at the rear. Unfortunately he doesn’t have the key with him but we can make out the vaulting through the grille. 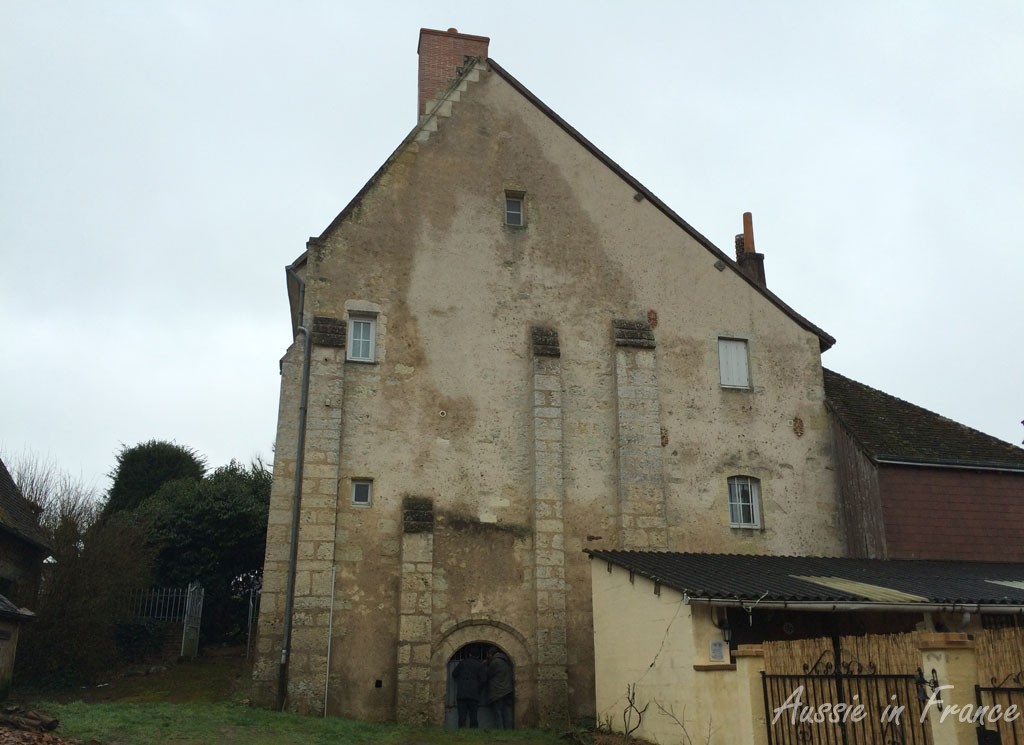 The priory from the back. You can see the archway leading into the chapel.

The renovations on the front façade, with its roller blinds, are a little bit modern for our taste but the vendor seems very proud of them. 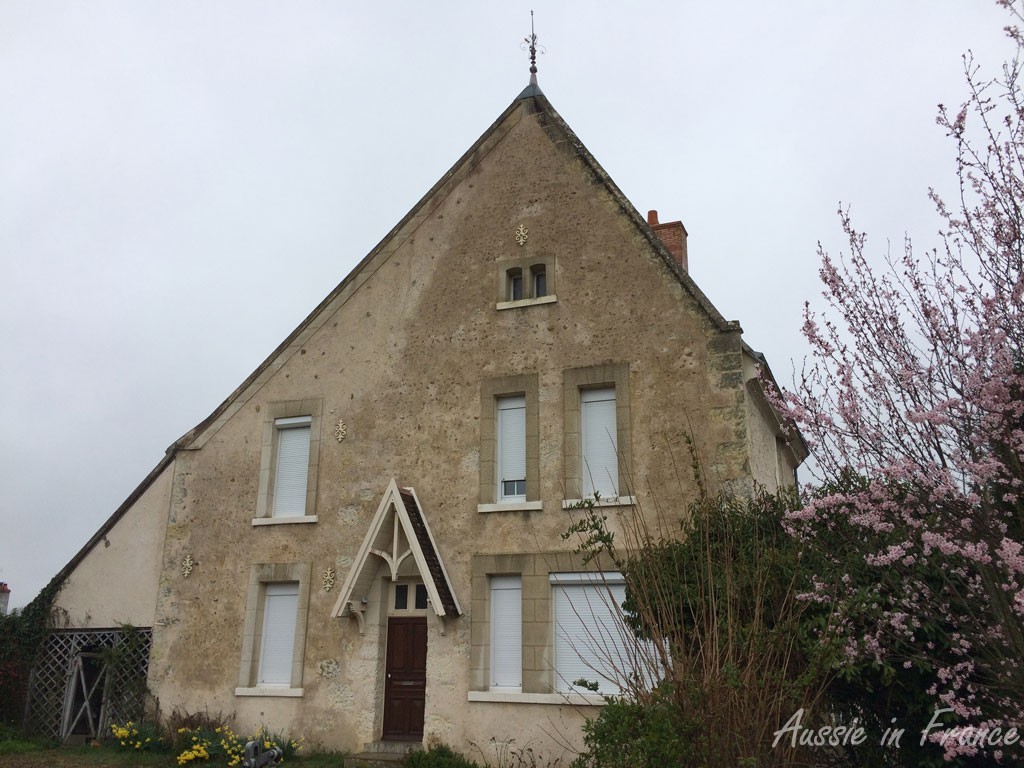 The front façade with its roller blinds.

We load the rest of the bricks into the car. I’m a bit worried about the weight. It may be a Volvo stationwagon but there are 244 whole bricks, each weighing about 2 kilos, and another 50 or 60 broken ones. That’s over 550 kilos. 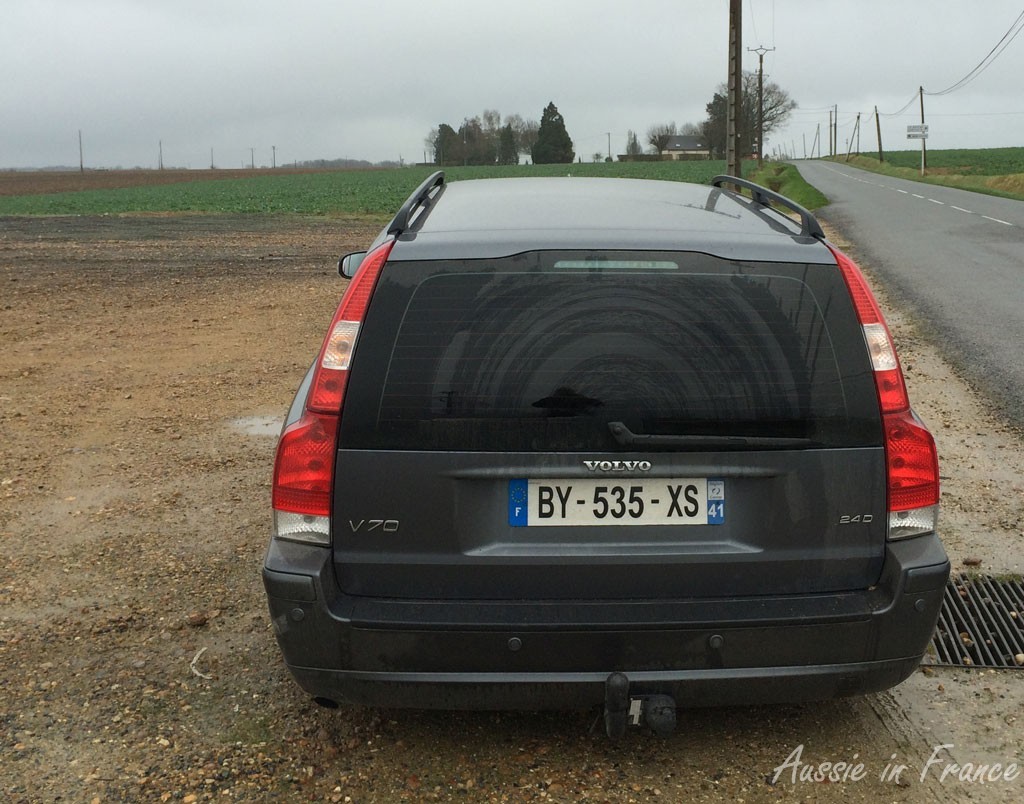 The Volvo very close to the ground at the back!

As we drive very carefully over the first speed bump, we hear a terrible grating noise casued by the trailer coupling. Hmm … The next speed bump looks even higher so we stop and reload the bricks so that the weight is more evenly distributed. 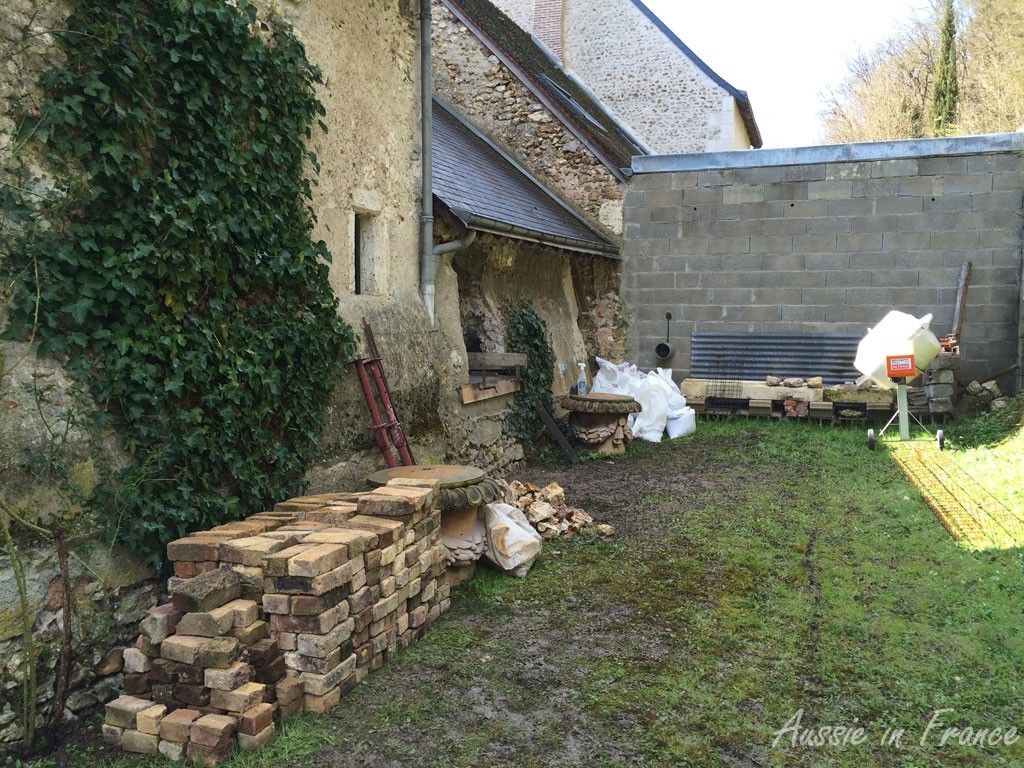 The bricks unloaded. You can see the stone sills at the end of the garden. The “practice” window is the last one on the right. That horrible concrete block wall will eventually be rendered.

Jean Michel drives home at a maximum of 70 kph instead of the usual 90 kph and we’re both relieved when we make it without further mishap. Next time we’ll take the trailer! 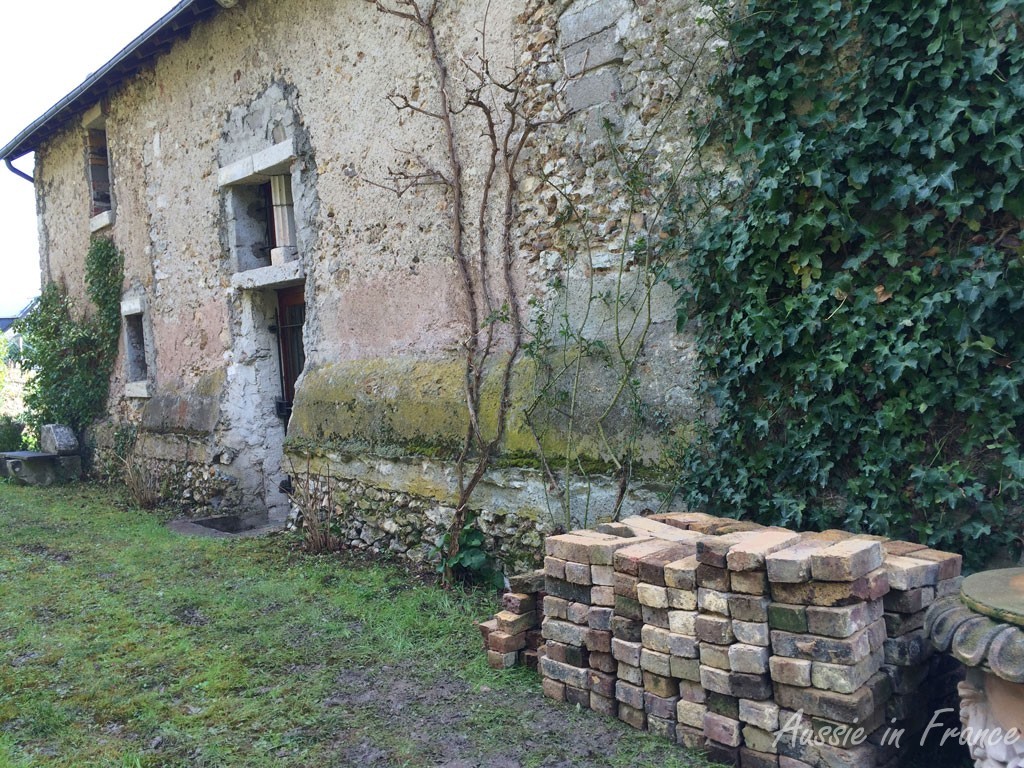 We then spend an hour or so loading the bricks into the wheelbarrow, taking them around the back of the house and unloading them. Does this sound familiar? Particularly if I say it’s also a fast day? 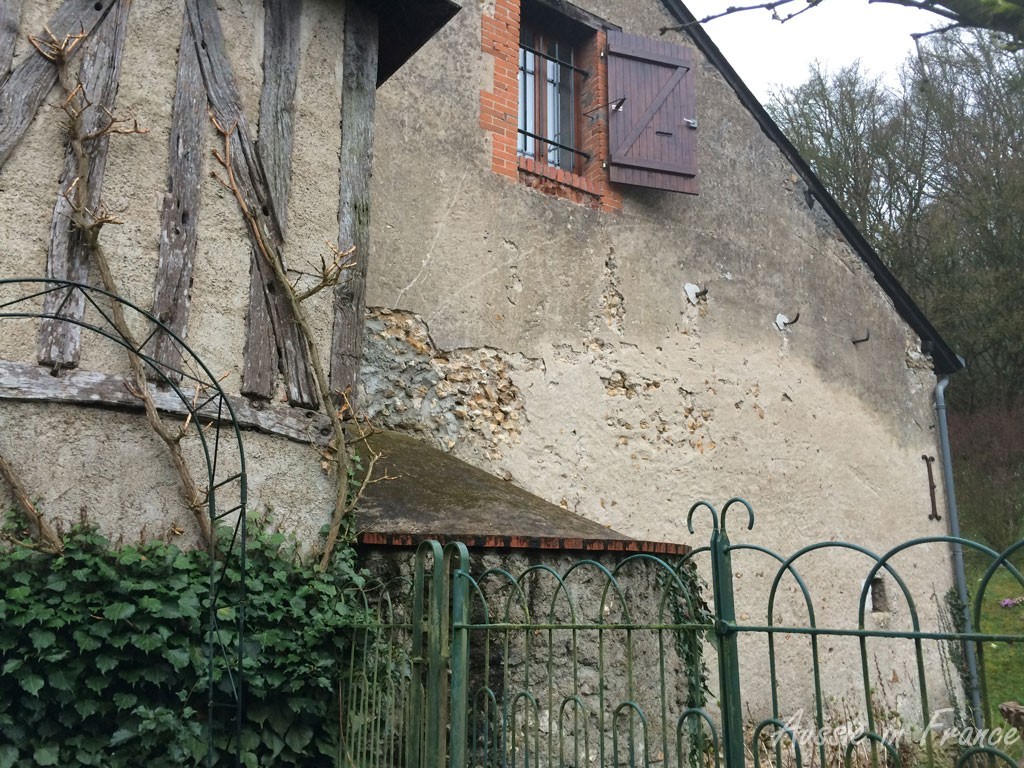 The side façade. The rounded part is the back of the bread oven. The new window will be on the right, to the left of the small window and will match the window up the top, only it will be bigger.

This entry was posted in Architecture, Closerie Falaiseau, Renovation and tagged renovating an old house in France. Bookmark the permalink.

17 Responses to Old Bricks, a Cloche and a Priory