Jean Michel has widened the window in the laundry to put in a new one as practice for the bay window that he is going to make in the 70 cm thick wall in the kitchen to let in more light and give us a view of our little wood which is currently full of daffodilsand primroses. 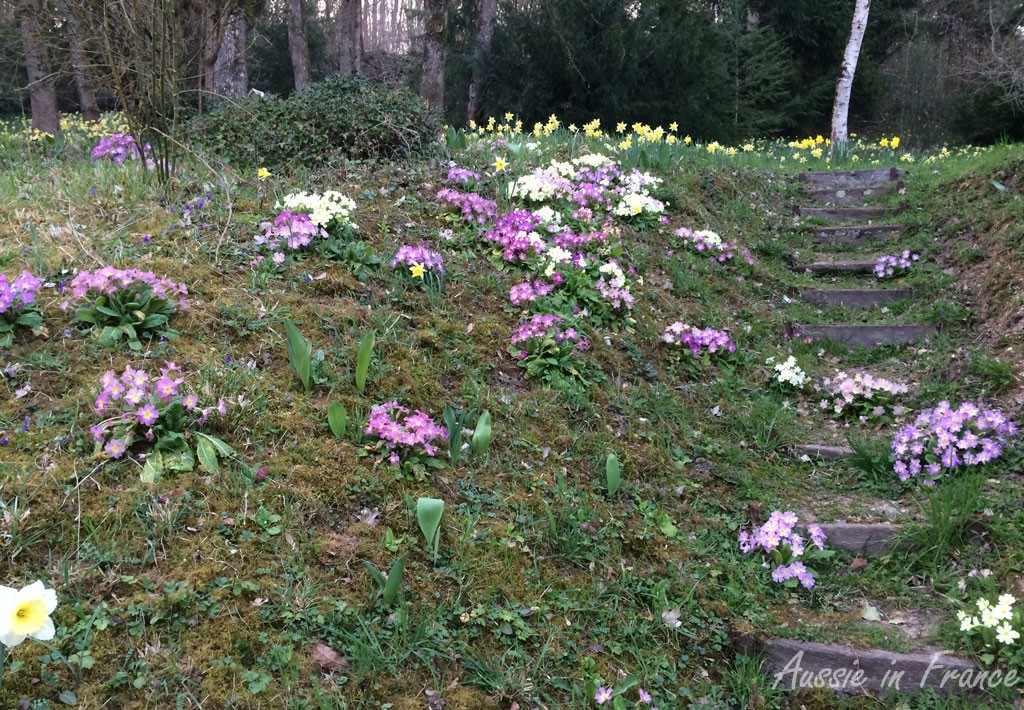 Daffodils and primroses in our little wood

Now he needs a cement mixer. He’s come to the conclusion that he needs a 150 litre model and has combed leboncoin.com, our favourite secondhand website. He has found a likely candidate in Blois and we’ve hooked up the trailer. 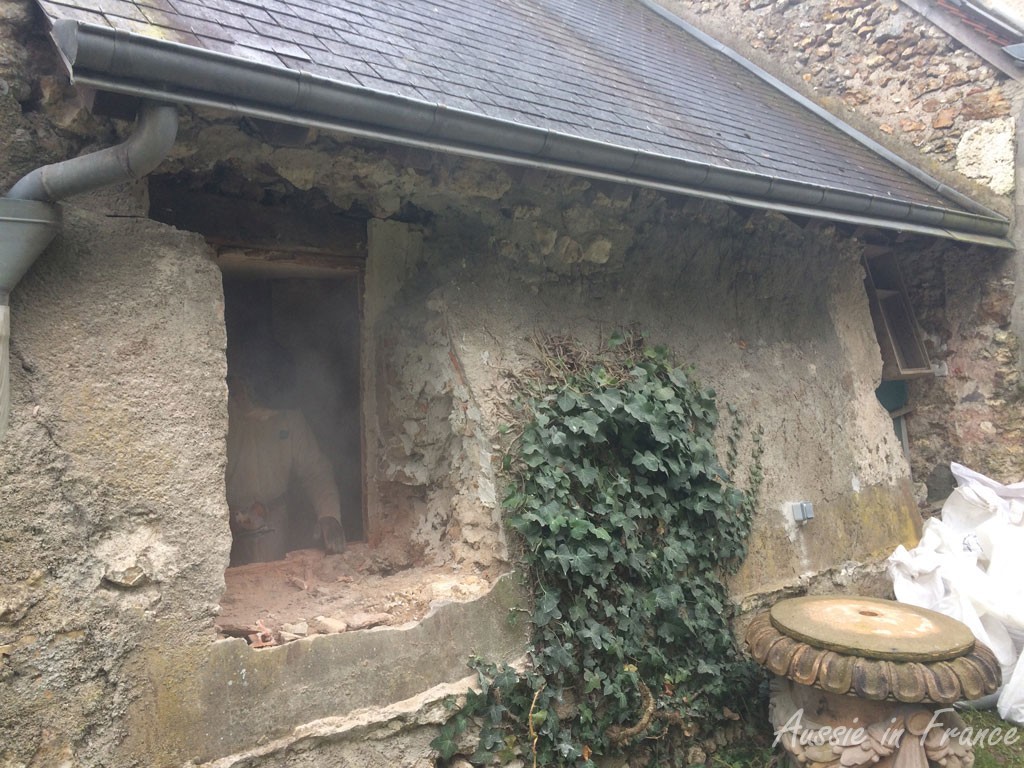 When we arrive at our destination on Saturday afternoon, he has a look at the cement mixer and, despite what was written in the ad, sees there  is a plaque saying that it is 110 litres. Hmm. We sit in the car and look at all the other ads on my iPhone (I have a leboncoin app). We phone several people but to no avail, leaving messages when there is no answer.

Just as we are get home, the phone rings. A man near Montrichard, about 40 minutes away, has a 165 litre model that seems to correspond to what we are looking for. It’s 200 euro as opposed to 500 or 600 euro new. We make an appointment for Monday morning as he’s busy all weekend. It’s the end of the hunting season, he tells Jean Michel, and he’s looking after the final feast. 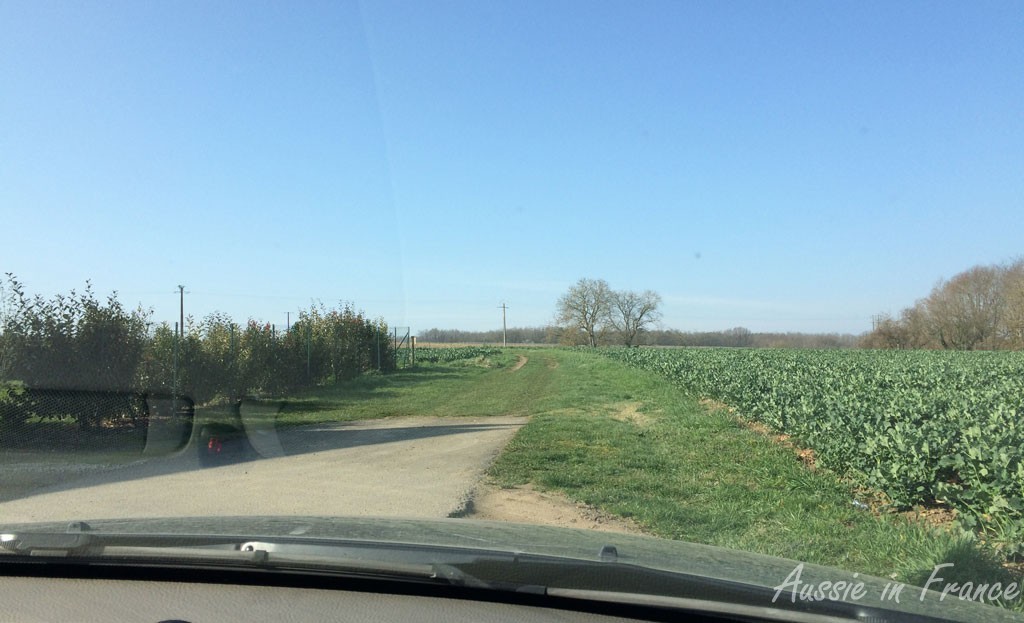 The road ahead is where the Tom Tom tried to take us!

We arrive on time despite the fact that our Tom Tom tries to take a short cut over a grassy track. Fortunately, there is just enough room to turn around, never simple with a large trailer. 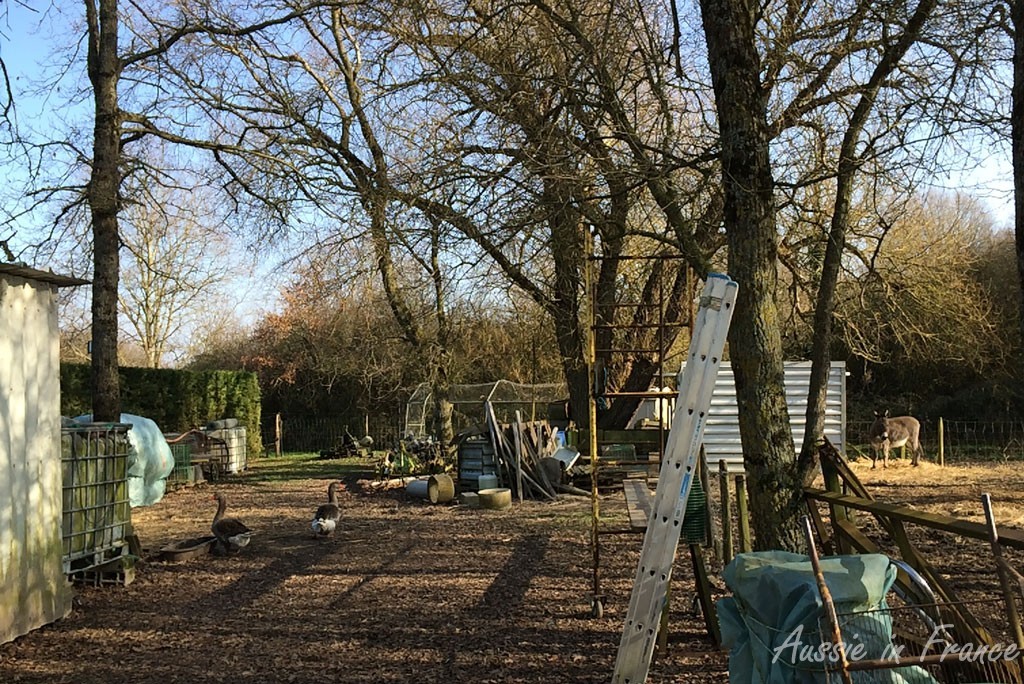 A sliding gate opens in a high hedge and the hunter indicates where we are to park. We can see the cement mixer at the far end of the garden. The grounds are large and flat with a basic-looking house on one side. There are several enclosures and sheds. Dotted about the garden are small statues. 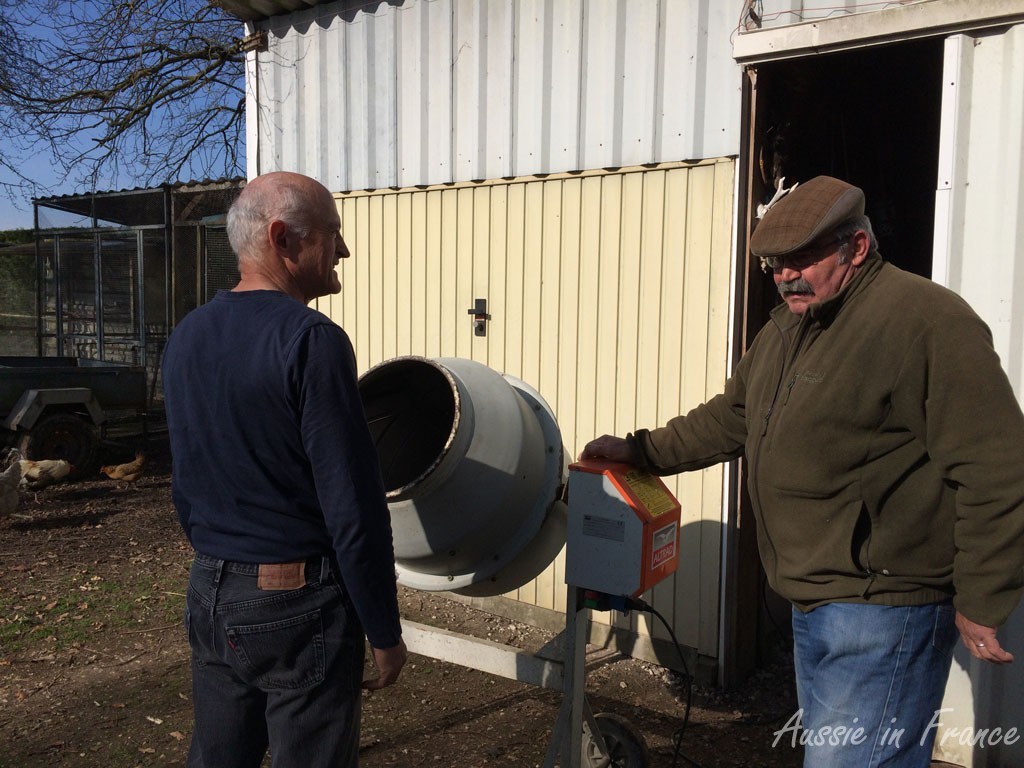 Jean Michel and the hunter in his flat cap

While Jean Michel sizes up the cement mixer, I take a few discreet photos. There is a donkey, lots of hens running around, at least two geese and three dogs of various sizes. There are also three large bird cages which, to my untrained eye, appear to contain crows and magpies.

The hunter points out the cleanness of his cement mixer and the blades inside that he made himself to replace the original inefficient ones. Jean Michel then discovers it’s fifteen years old so tries to bring down the price. No, that is my final price, says the hunter, so Jean Michel says he’ll take it and starts getting the trailer ready. 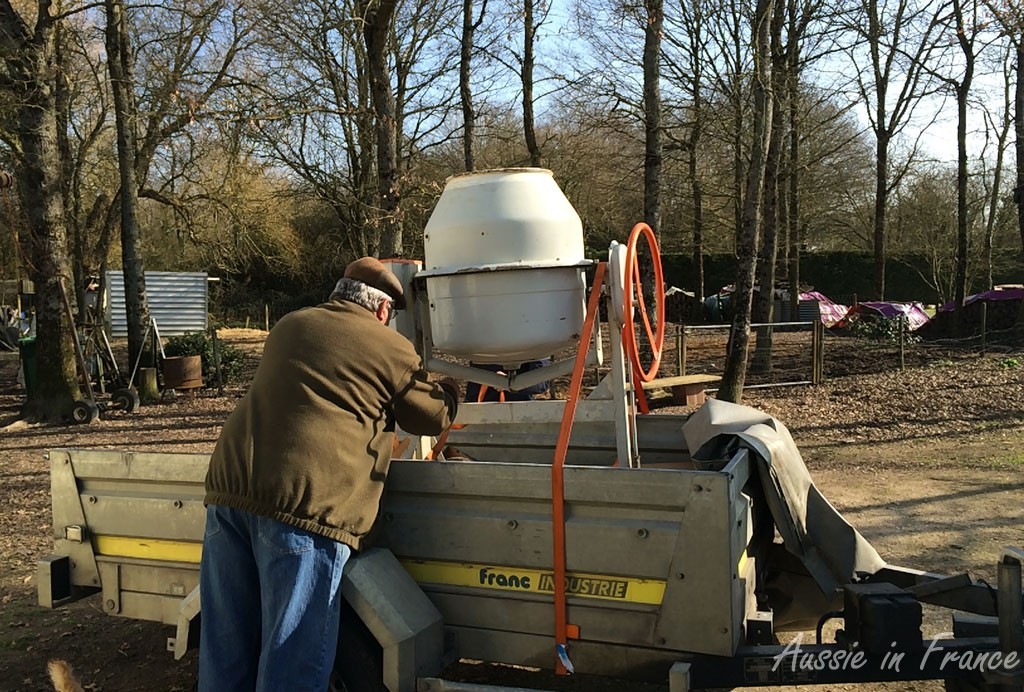 Getting the cement mixer onto the trailer

Between them, that get it into the trailer and attached with two straps. Jean Michel hands over the money and we’re all set to go. But I am curious about the crows.

“What do you do with the birds in the cages?”, I ask, careful not mention crow or magpie just in case I’m completely wrong and they’re some sort of special species. 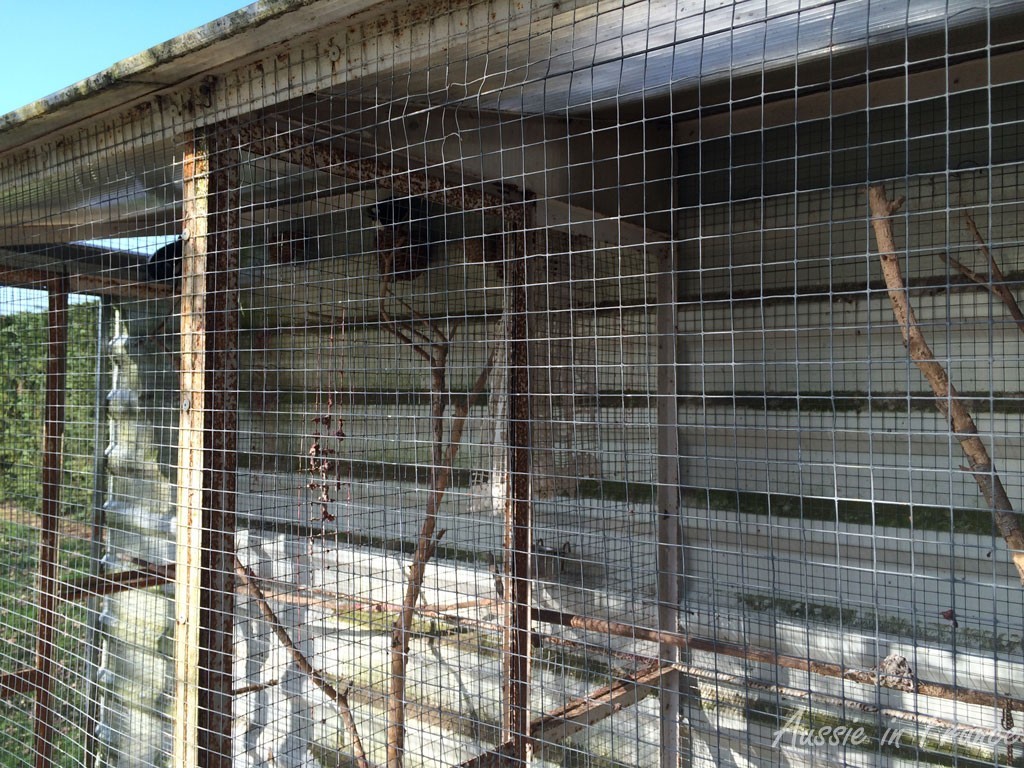 Bird cages with crows up the top

He explains that he captures them and sets them free further afield where there are fewer crows and magpies. Some of his hunter friends seem to be a part of this operation. He then lets slip that he has far two many crows on his own property and they steal his eggs. There you go! 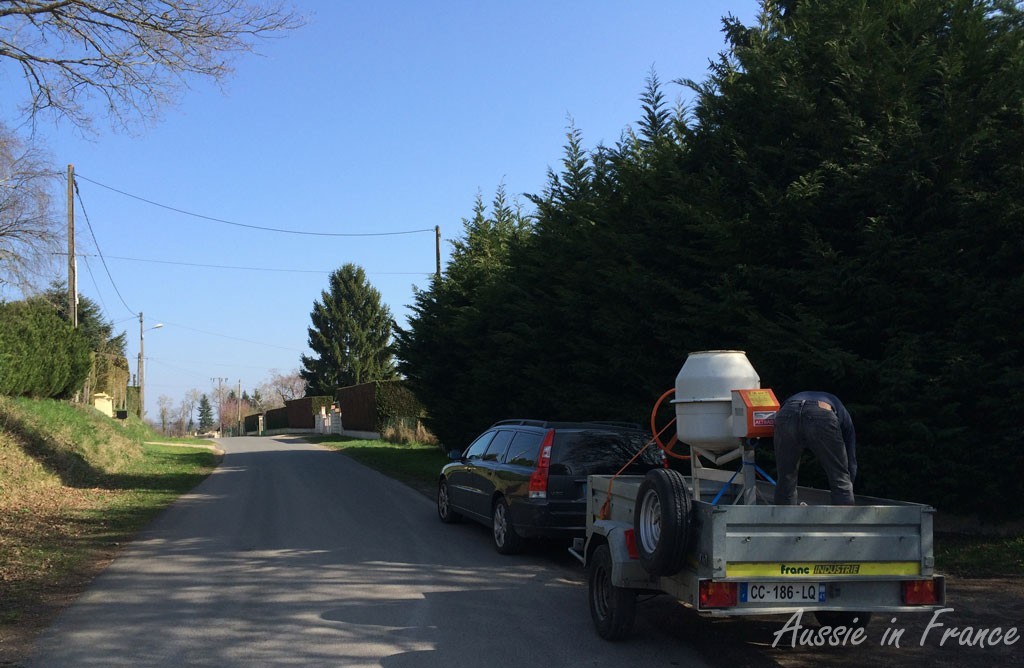 Stopping to pick up the cardboard

We set off for home, but have to stop a couple of times on the way. First, some loose cardboard flies out of the back of the trailer and second, one of the straps snaps. Fortunately, Jean Michel notices it immediately and the other strap is still firmly securing the cement mixer. 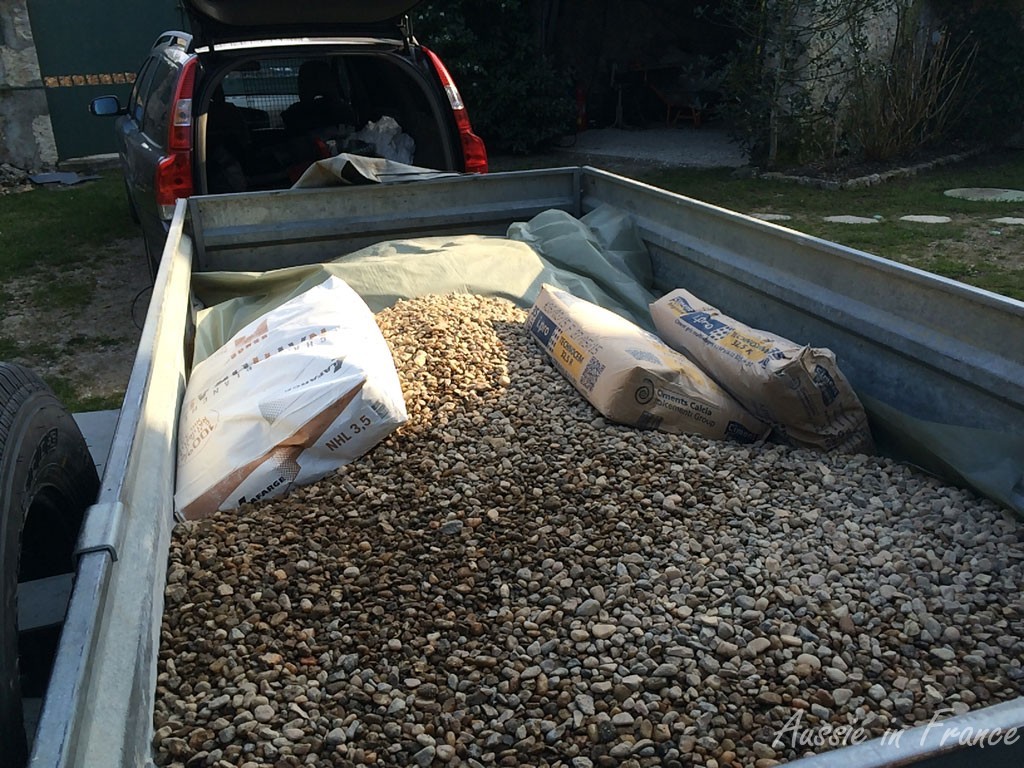 We arrive back home with no further mishaps and unload our new acquisition. After lunch, Jean Michel goes off to buy sand, gravel and cement. When he comes back, I help him bag it (well, I prepare and hold the bags while he shovels) and he takes it around the back to the window in the wheelbarrow. By the time we’re finished, we’re well and truly ready for a shower and dinner. It’s a 5:2 fast day and we’ve worked up an appetite!

This entry was posted in Renovation and tagged buying a cement mixer in France, crows in France, renovation in France. Bookmark the permalink.

9 Responses to Cement Mixers and Crows