Getting to Delhi and First Impressions

The big day has arrived at last for our 6-week holiday in Australia via India. As you know, we now have our hard-won visas. We leave Blois at 1.30 pm by car. Our flight is at 9.30 pm. We’ve checked out the trains and discovered that, since we arrive back at 6 pm at Charles de Gaulle airport we’ll be too late to take the last train back to Blois which means an overnight stay in Paris. We check out the long-term parking around the airport and secure, underground parking at the Mariott Hotel turns out to be the cheapest. At 164 euro for 41 days, it’s cheaper than taking the train to Blois then to the airport and paying for a hotel and it’s certainly much easier ! 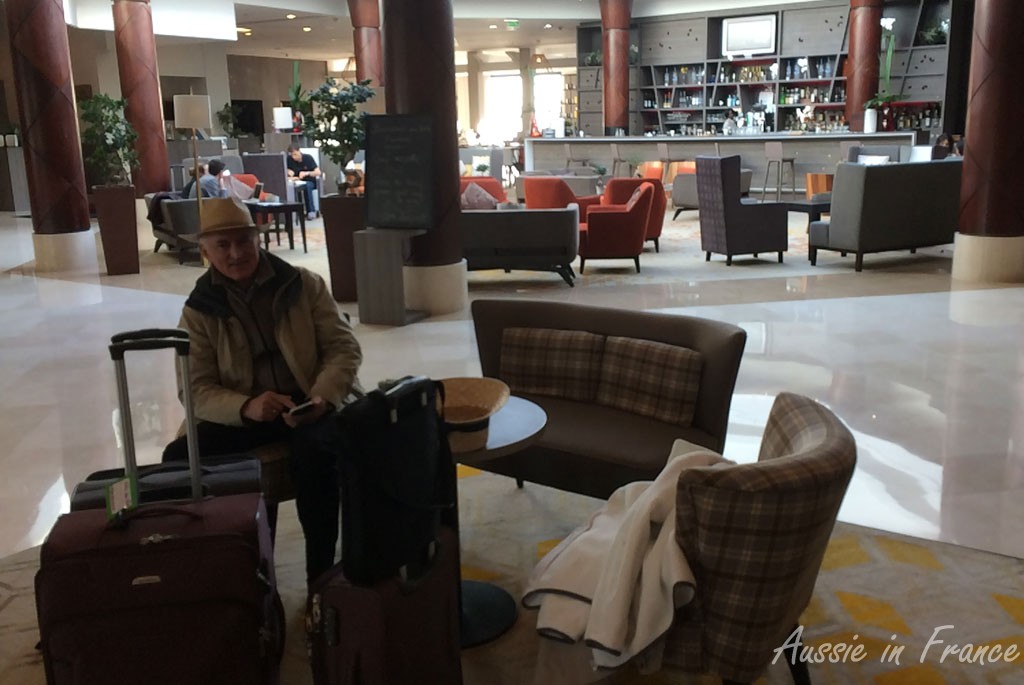 Waiting in the Mariott Hotel lobby

We arrive at the Mariott at 4.30 pm and enter the parking lot with our code (we’ve reserved and paid on-line). We take the lift up to the lobby of the hotel where we wait for about 15 minutes until the free shuttle arrives. It leaves us at the hotel shuttle drop-off point near the train station at the airport. That’s where we’ll pick it up on the way back. Very smooth. 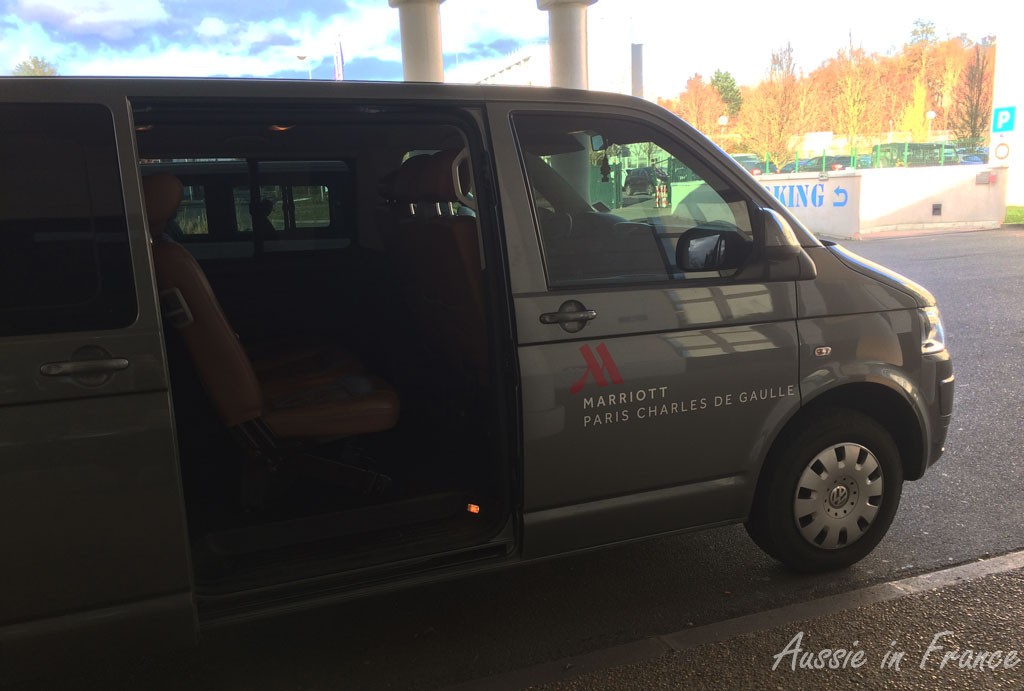 The shuttle bus at the Mariott Hotel

After checking in our luggage at the Air India counter, we go through passport control and security and look for somewhere to have a drink as we have another two hours to kill before boarding. There is now free wifi throughout the airport BTW. We reject MacDonalds despite its luxurious looking sofas but can’t seem to find an alternative. Just when we’ve despaired of finding anything better, we see that Fauchon has a bar. We are practically the only people there. You wonder how they can even survive although admittedly February is not peak season. 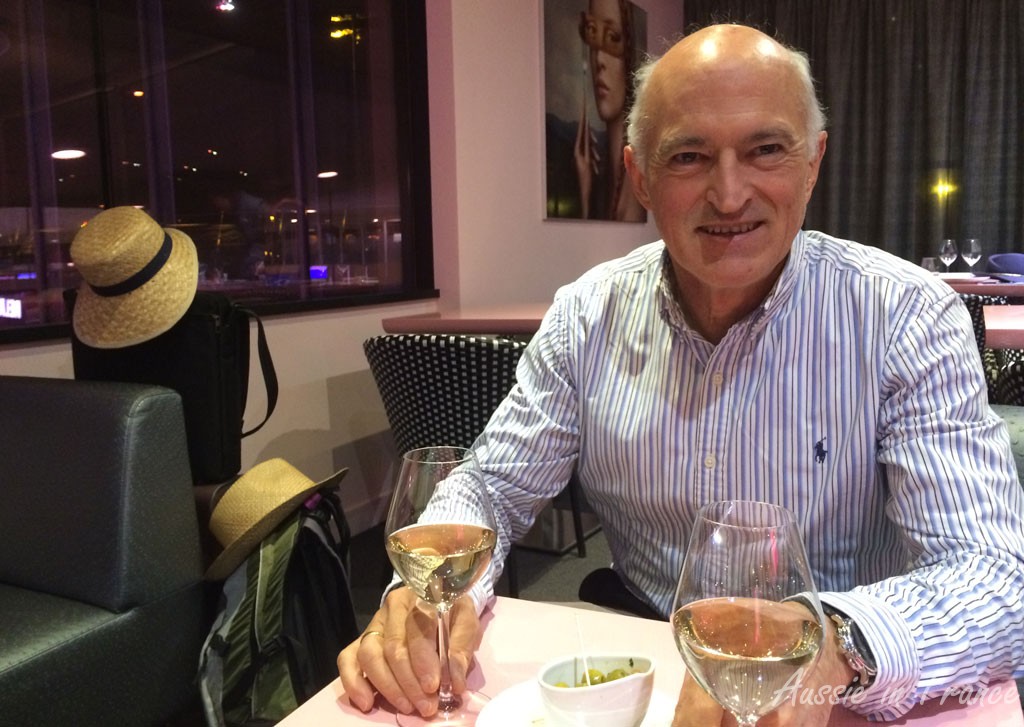 Having a drink at Fauchon’s bar at Charles de Gaulle

We are pleasantly surprised by the leg-room in Air India’s hi-tech Boeing 787-8 Dreamliner. The last time we went on a long-haul flight, we could hardly move our legs. The service is not very good nor very friendly, but we’ve chosen Air India this time because the prices are very competitive. My head phones are broken and not very comfortable. I’m given new ones and we watch the King’s Speech which I’ve already seen and enjoy again. We stop from time to time so that I can explain to Jean Michel the parts he hasn’t understood. I don’t get a wink’s sleep during the 7 ½ hour flight but at least I get some rest. 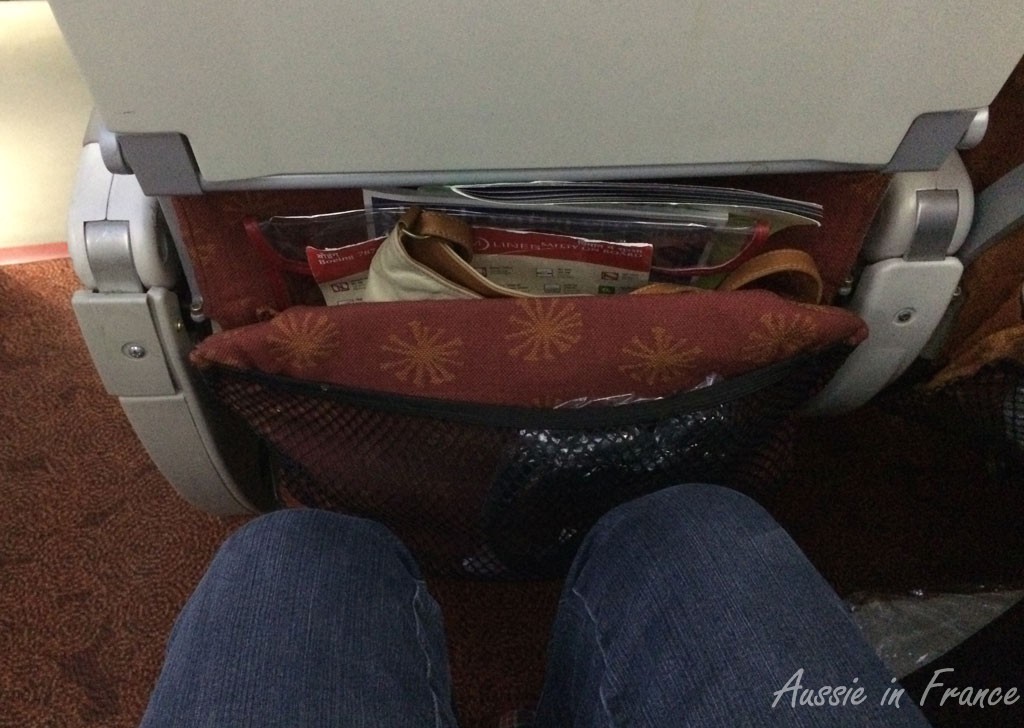 Passport control on arrival at 9.30 am in Delhi is quick and easy and we have soon picked up our luggage (both suitcases are there to our relief – on our return trip from Australia 3 ½ years ago, Cathay Pacific permanently lost one of our cases). We change some euro into rupees (71 rupees for one euro which means we have to start thinking in thousands) and are met as we come out of customs by Shiva, from Trinetra Tours which we have chosen because it has one of the best ratings on Trip Advisor and the services seem to correspond to what we are looking for. 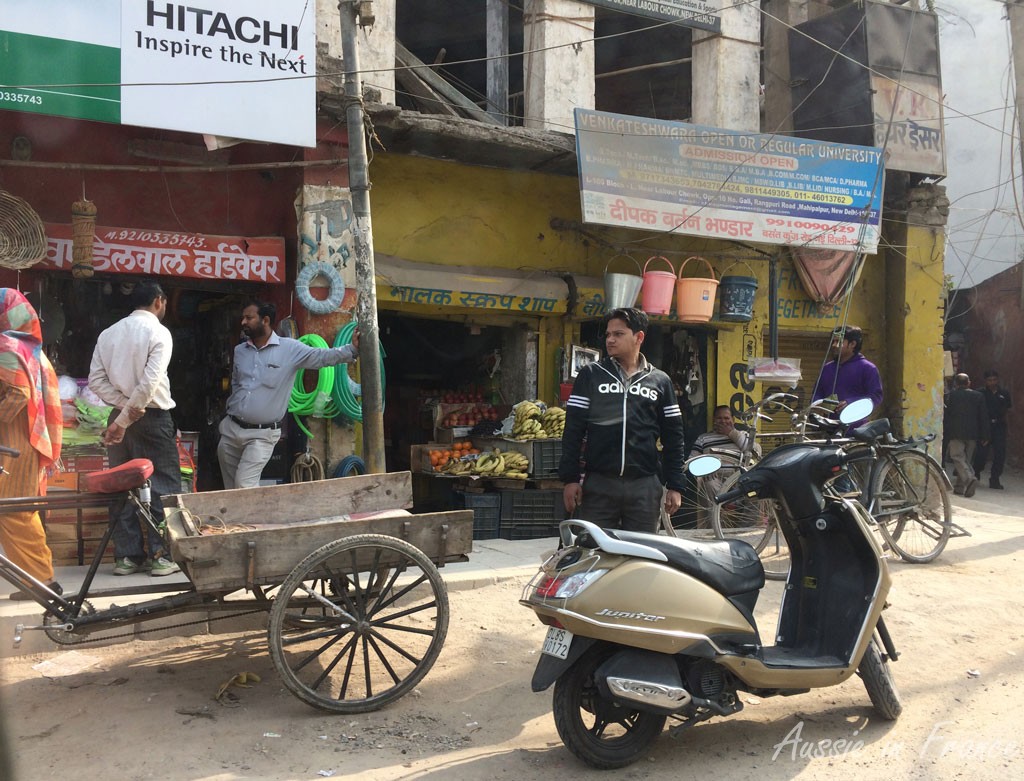 Old and new in Delhi

He greets us and takes us out to our airconditioned chauffered car driven by Anand. This beats having to fend for yourself in a country like India!  Shiva outlines our Delhi Delights tour (we are leaving for Sydney the next day at 1.15 pm so it’s essentially an afternoon tour) and gives us our vouchers, information about tour etiquette including tips, and the itinerary for our 5-night Golden Triangle tour on our way back from Australia in mid-March. We will tip Shiva 500 rupees, Anand 300 rupees a day and our French-speaking tour guide who is joining us at our hotel at 12.30 pm, 500 rupees per day. 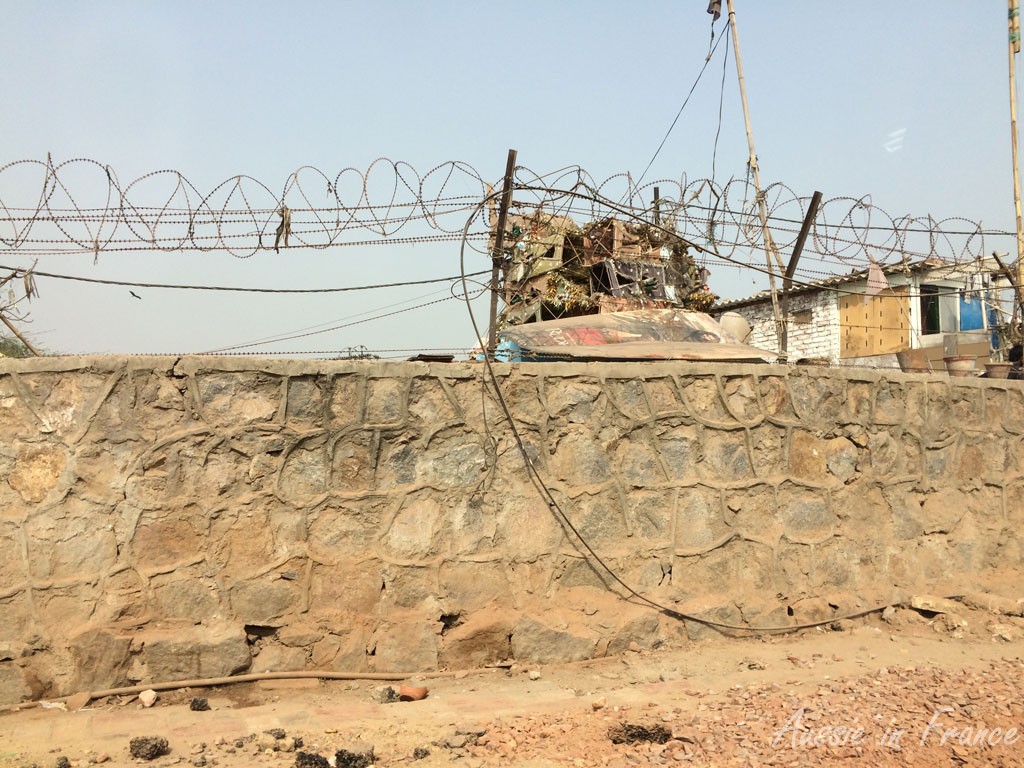 There is a lot of barbed wire in Delhi

The drive from the airport to our hotel, Jüsta Residence Greater Kailash, is an eye opener for Jean Michel. He’s surprised there are no skyscrapers, considering that New Delhi has a population of 16 million people. Perhaps they are some further out but throughout the day we see only very moderate high-rise buildings. 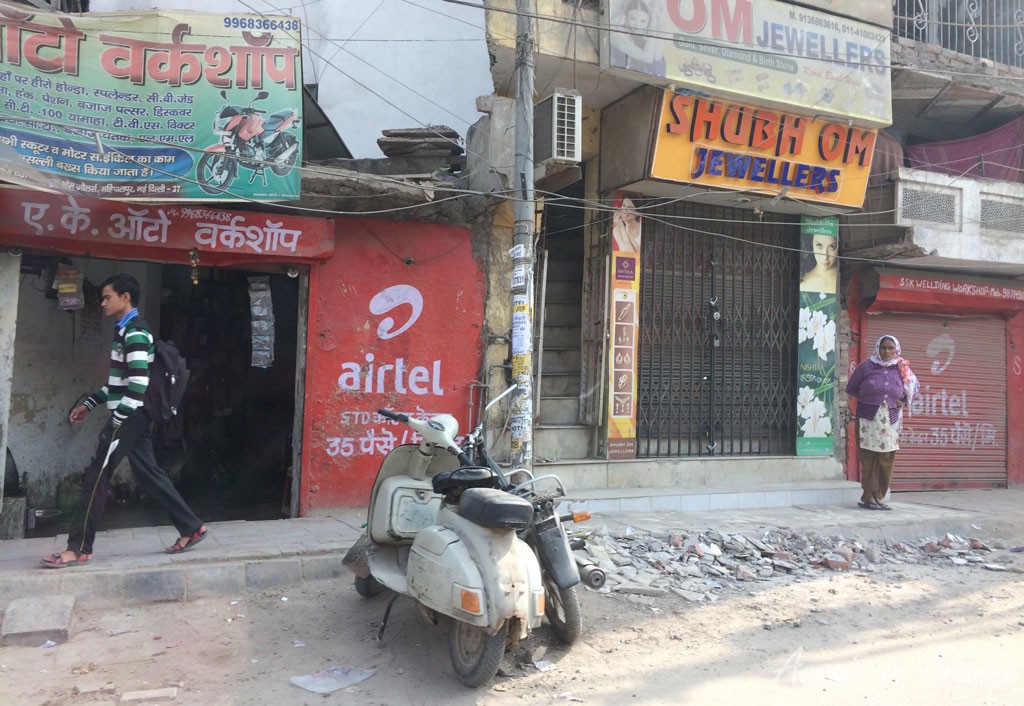 On the road from the airport

We drop Shiva off halfway along and Anand, whose English is much more basic but still sufficient, takes over, telling us about the transport system – a metro, 4 types of buses and 4 types of taxis and rickshaws, if I remember correctly – and asks us information about ourselves. Where do we come from, how many children do we have, how old are they, etc. We inquire about his own family. 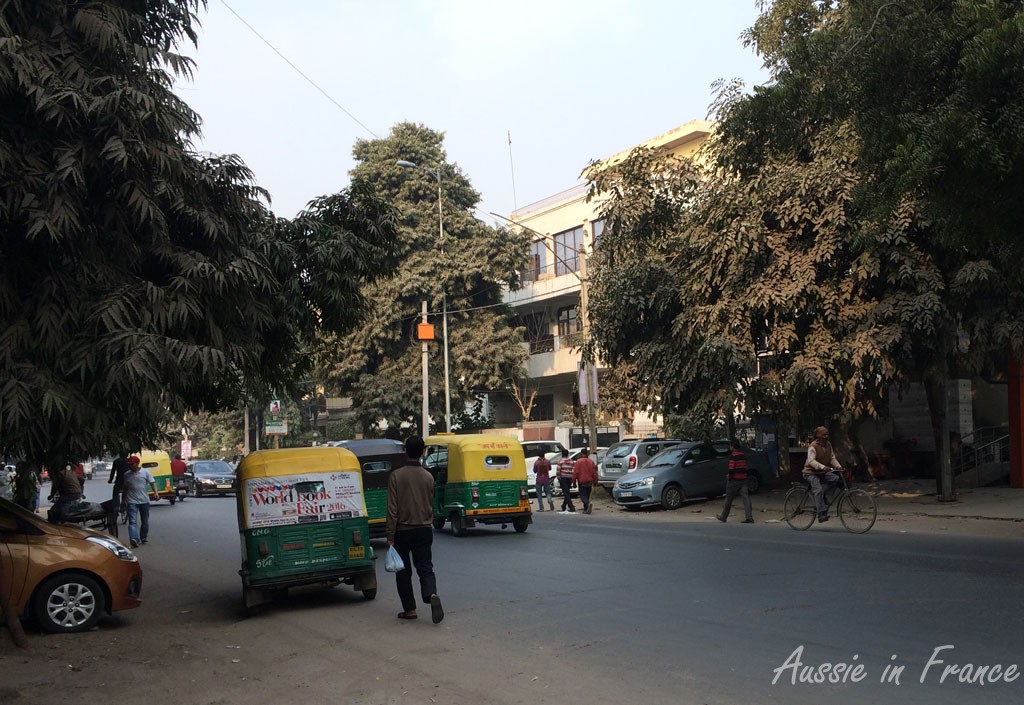 The street in front of our hotel

He and his wife are from the Himalayas and had an arranged marriage 22 years ago and are very happy. They have three children, 13, 15 and 17, and his 91-year old mother also lives with them. He tells us that 70% of marriages in India are arranged and 90% in the Himalayas. There are more love marriages in the big cities 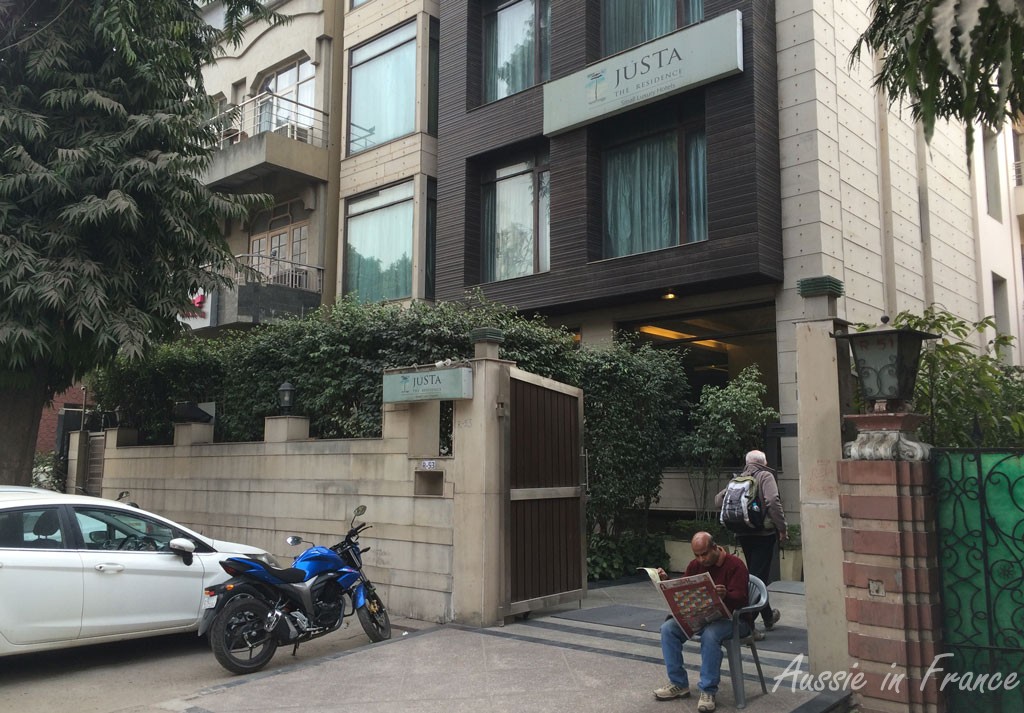 He points out various buildings as well, showing us in particular where the civil servants and middle class live, many in enclosed residential areas. He tells us our hotel is in a chic area. It’s hard to really tell, but there aren’t any slums. 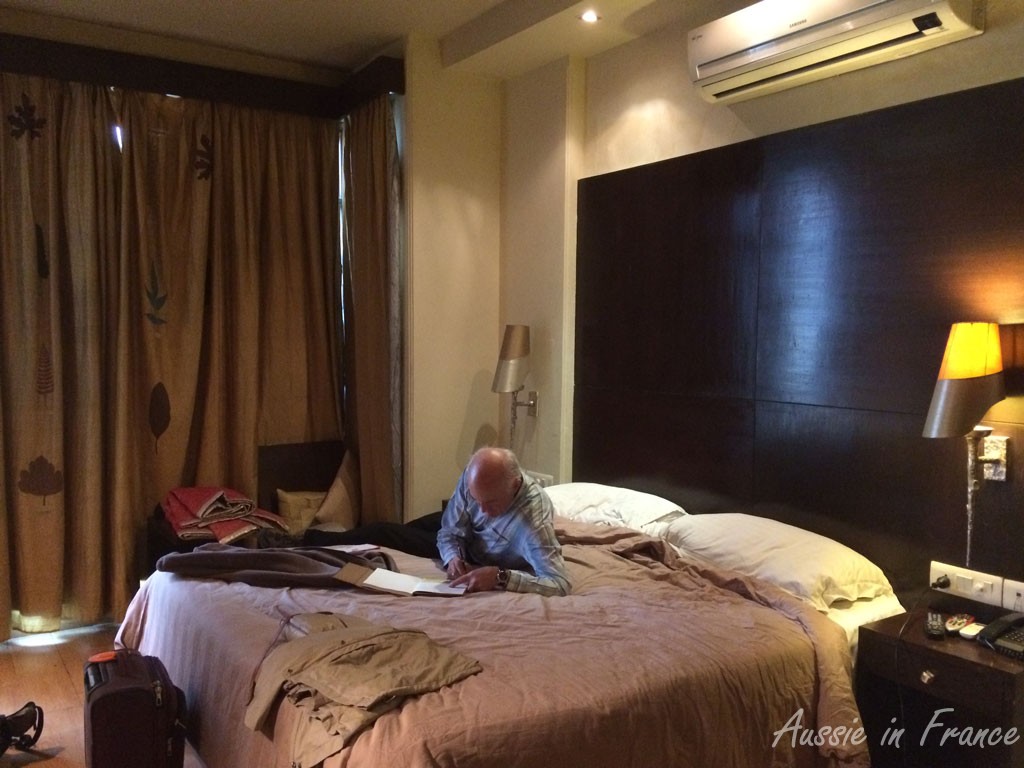 Our bedroom at the Justa Residence GK Hotel

We pull up outside the hotel which is not very pretentious from the outside and are swooped on by several young men who take our luggage. We arrange to meet with our French-speaking guide and Anand at 12.30 pm and go up to take a shower and get changed. It was 13°C when we arrived but it’s a cloudless sky and the temperatures will reach 26°C during the day. 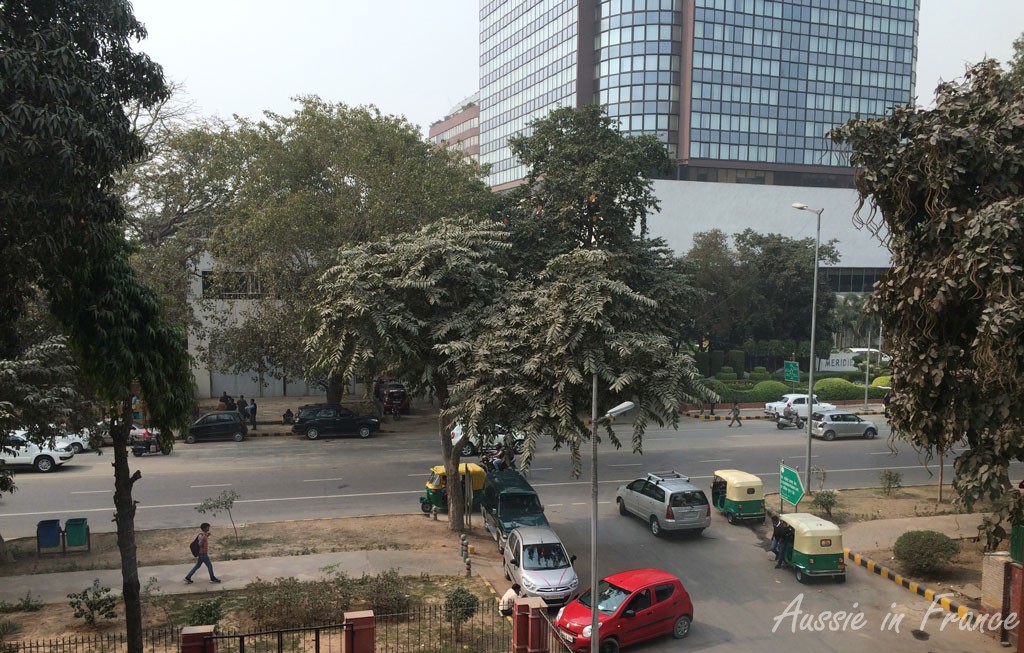 The Meridien Hotel, one of the few high-rise buildings in the centre

I check the tipping instructions and we give 50 rupees to the bellboy who brings our cases in one at a time. The room is clean, pleasant and reasonably spacious. However, there is no bath mat, only two large towels (no small ones) and the shower takes a long time to drain. There is an electric jug but no tea and only one cup. Thank goodness I brought a couple of tea bags. The attractive silk curtains have a problem in the middle. It seems very noisy but at night it turns out to be fine. 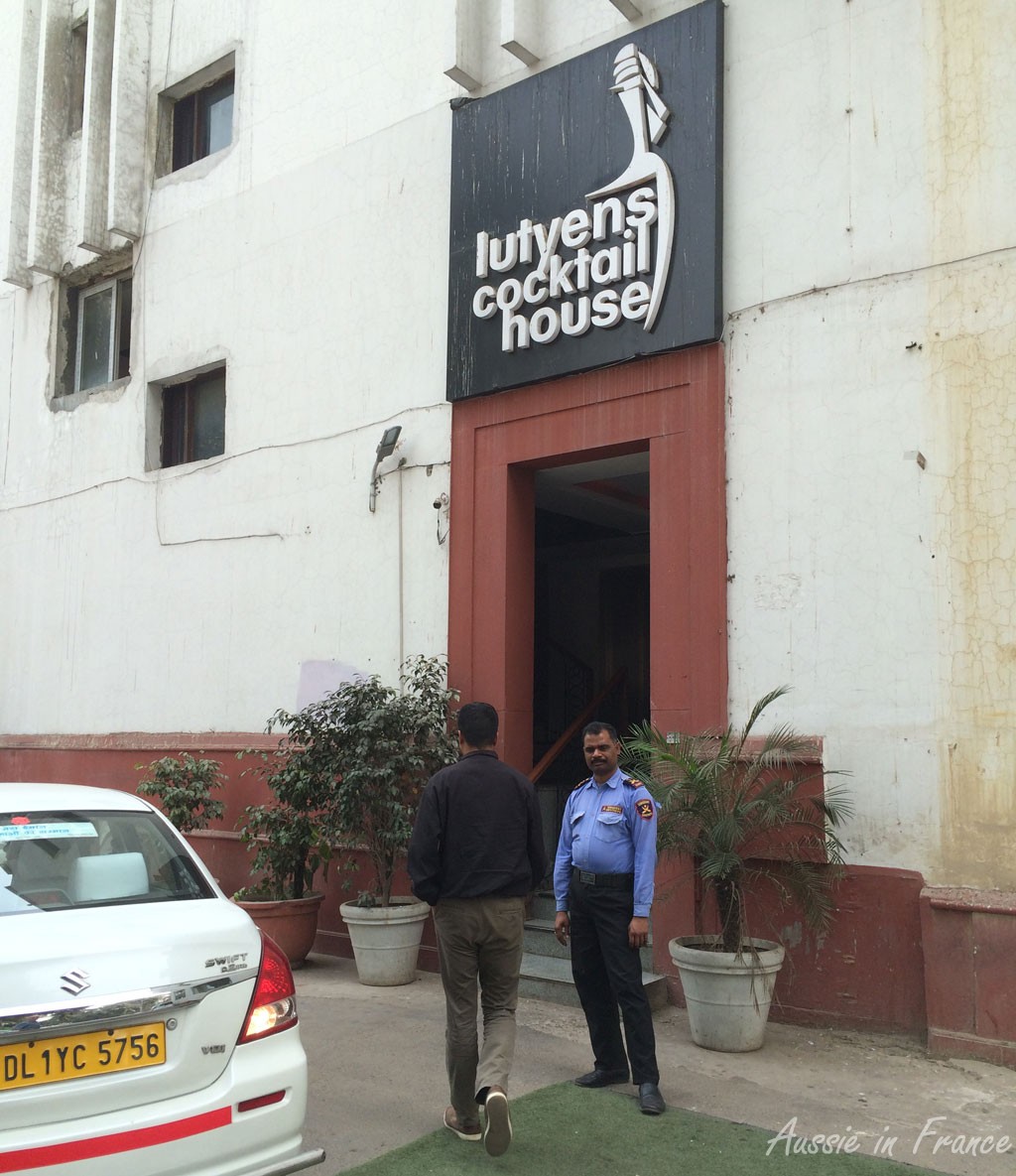 The Lutyens Cocktail House, not exactly what we were expecting

I think it’s one of those hotels that was probably very nice when it first opened but suffers from a lack of maintenance as so often happens. We sort out what we need for the day and join our guide, Summer, and Anand to go to lunch at the Luytens Cocktail Hotel, not exactly what we are expecting …

17 Responses to Getting to Delhi and First Impressions