After a thoroughly enjoyable stay in Jaipur, we’re on our way to Agra which is the last point in the Golden Triangle. It is 8 am. Ragendar tries to find an ATM but they seem very scarce. He’s says not to worry, that he’ll lend us any money we need before we get to Agra. The road is a bit better than Delhi-Jaipur and takes us through somewhat desolate countryside with occasional crops of cereals and potatoes interspersed with roadside villages. 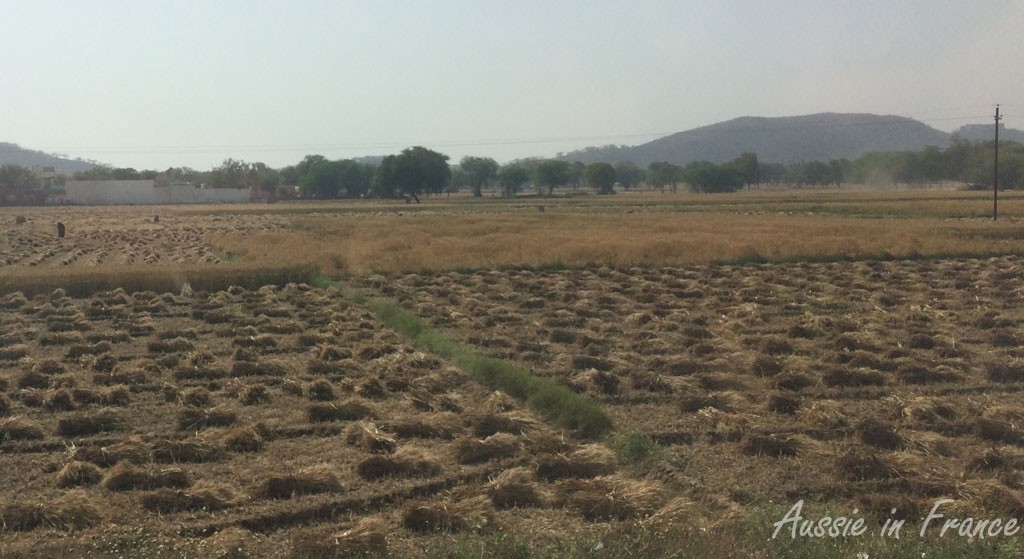 As he drives, Rajendar tells me about some of his many occupations. Compared with a lot of the Indians we meet, his view of life is very modern. He lives with his wife and daughter in Delhi and not with his mother in her village. He tells us about the charity work he does with a group of friends from his village for a month each summer. They go around to the surrounding villages to try and convince poorer families not to put themselves into huge debt in order to finance their daughters’ weddings.

Halfway to Agra, we stop for a break at Motel Gangaur, which suddenly appears out of nowhere. It also has a restaurant and very large souvenir shop. We wander around a bit but don’t see anything of any interest. While we are waiting outside for Rajendar to finish his cigarette, we see several tourist buses pull up as well as other chauffered cars. We have no confirmation but imagine that the chauffeurs and guides who stop here receive a commission on any purchases. 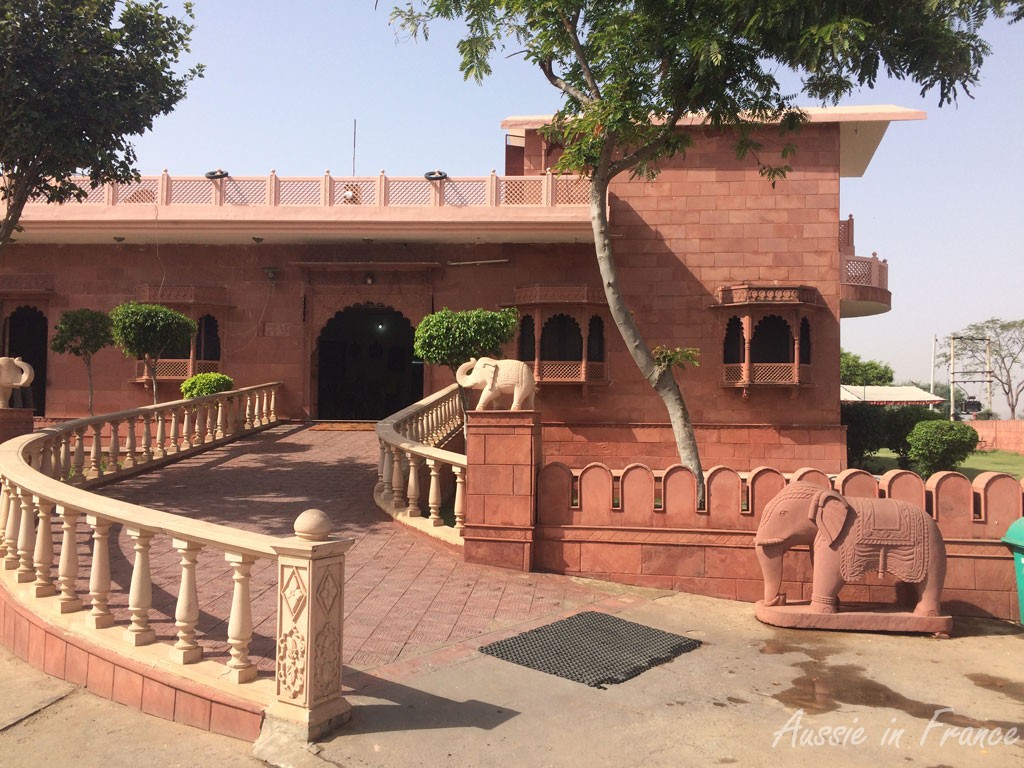 The Motel Ganghur where we have our coffee break

We go past fields and fields of bricks and brickworks with tall chimney stacks. Rajendar continues to talk about traditional Indian life. With the problem of dowries, the population is becoming so lopsided that routine ultrasound scans are now forbidden during pregnancy. When there are several women living in the same house with their respective husbands and their mother, intimacy becomes a challenge. Often the women sleep in one room with the children and the men in another. A third “nuptial” room is then occupied in turn by the different couples. Rajendar adds that, when it’s “his” turn the man doesn’t work that day! 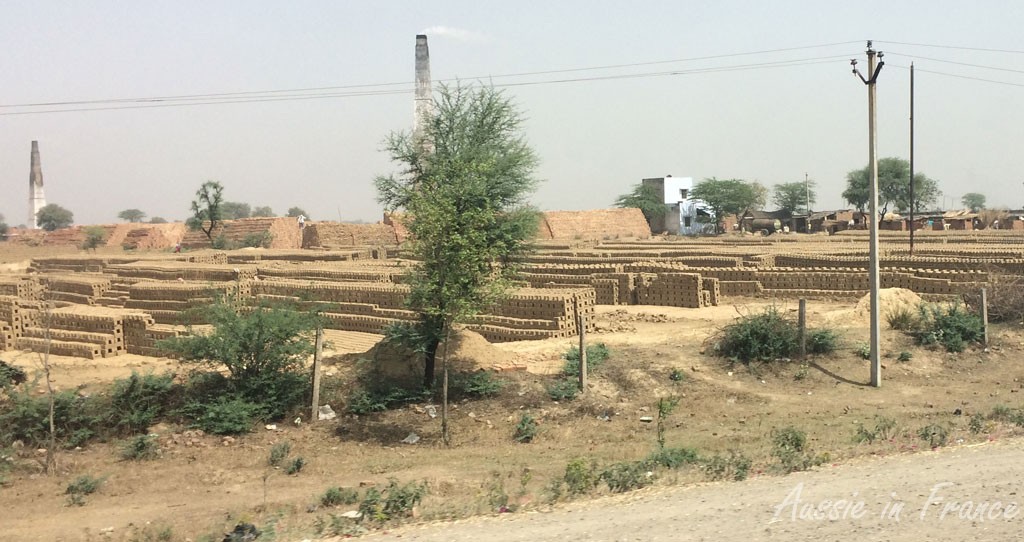 Brick factories and stocks on the road to Agra

At midday, we arrive at out first destination for the day, Fatehpur Sikri. Our French-speaking guide is waiting for us. I dislike him on sight. He speaks incorrect French with a very strong accent and generally looks disdainful and totally uninterested in what he is doing. He doesn’t ask any of the usual “get-to-know-you” questions we are now used to. We leave the car and take a crowded bus to the red sandstone complex. It’s excessively hot. 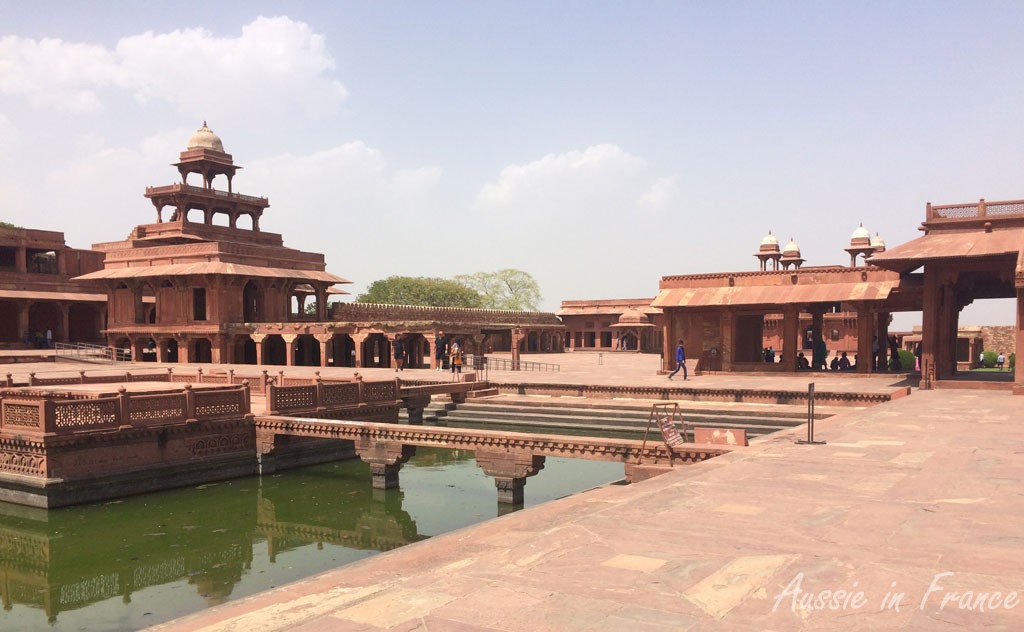 The guide gives us a minimum amount of information each time then waits in the shade while we visit the different buildings. Built in 1571, the carefully-planned walled city of Fatehpur Sikri was the political capital of the Mughal Empire during the reign of Akbar from 1571 to 1585 after whose death it was abandoned, mainly due to lack of water. 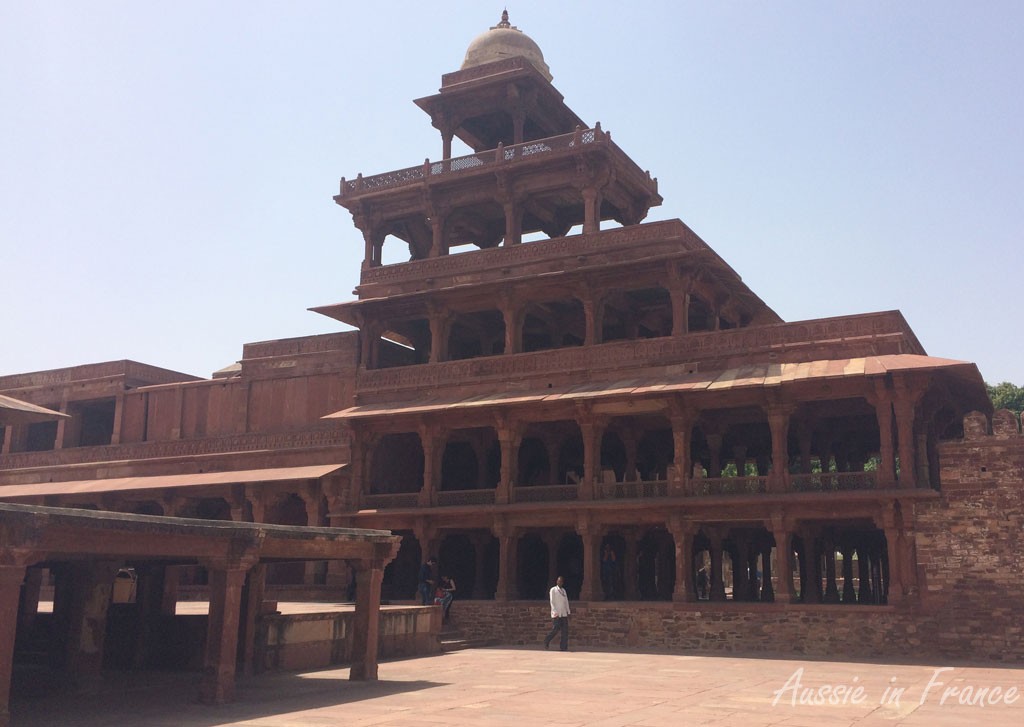 Panch Mahal, a five-storey building for the women of the court

It includes royal palaces, a harem, courts, a mosque, private quarters and other utility buildings which reflect the importance of Akbar, son of Humayun, whose tomb we saw in Delhi, changed the course of Indian history. During his rule, the Mughal empire tripled in size and wealth. He created a powerful military system and instituted effective political and social reforms. 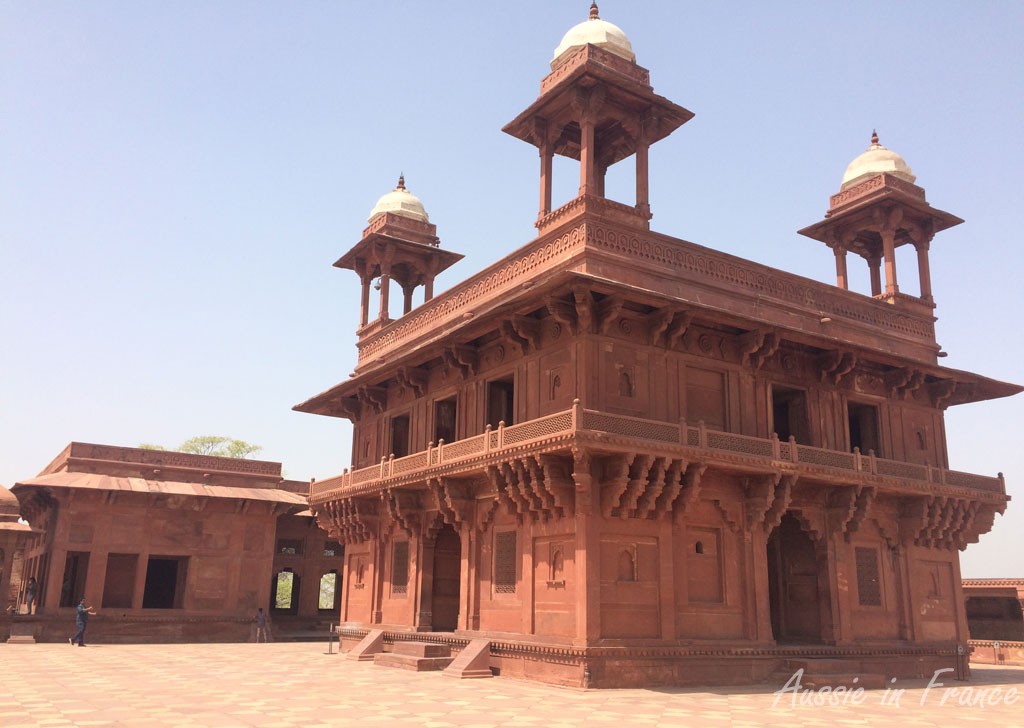 One of the most interesting buildings is the Diwan-i-Khas (Hall of Private Audiences) with its magnificent sculpted stone pillar which flares to create a flat-topped plinth linked to the four corners of the room by narrow stone bridges. It is believed that Akbar used the plinth to debate with scholars and ministers who stood at the ends of the four bridges. 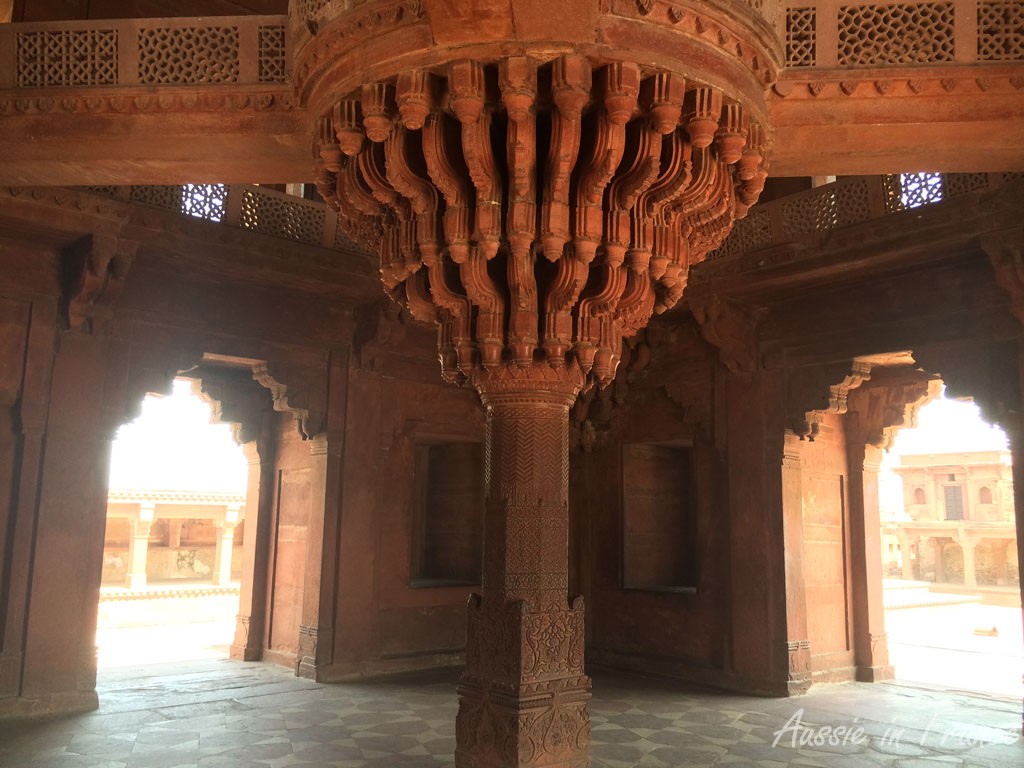 Akbar is said to have had 5,000 wives. Mariam-uz-Zamani Begum was chief Rajput wife and empress of the Mughal Empire. He also had a Muslim wife and a Christian wife called Mariam from Goa but some say that she and Mariam-uz-Zamani are one and the same person. In any case, they all had different palaces. Most of them have open areas enclosed by curtains and matting depending on the season. 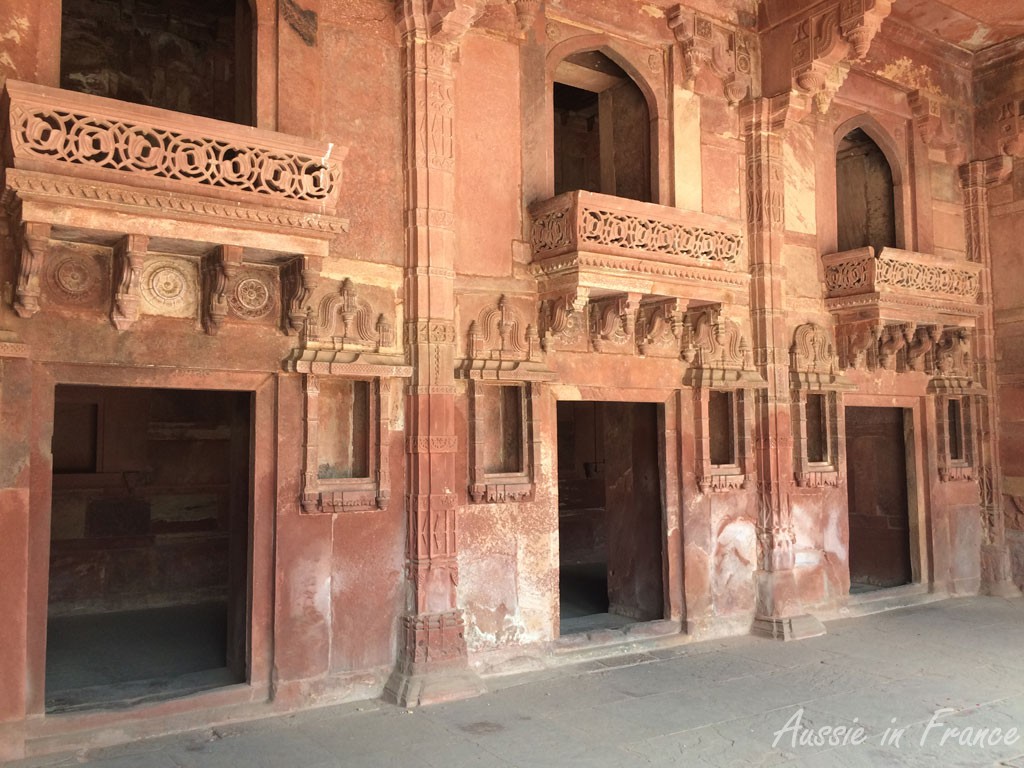 Inside one of the beautifully sculpted palaces

Akbar used to sleep on a platform surrounded by water as a sort of natural air-conditioning. I can understand why if today is anything to judge by! It also prevented anyone stabbing him to death during the night. 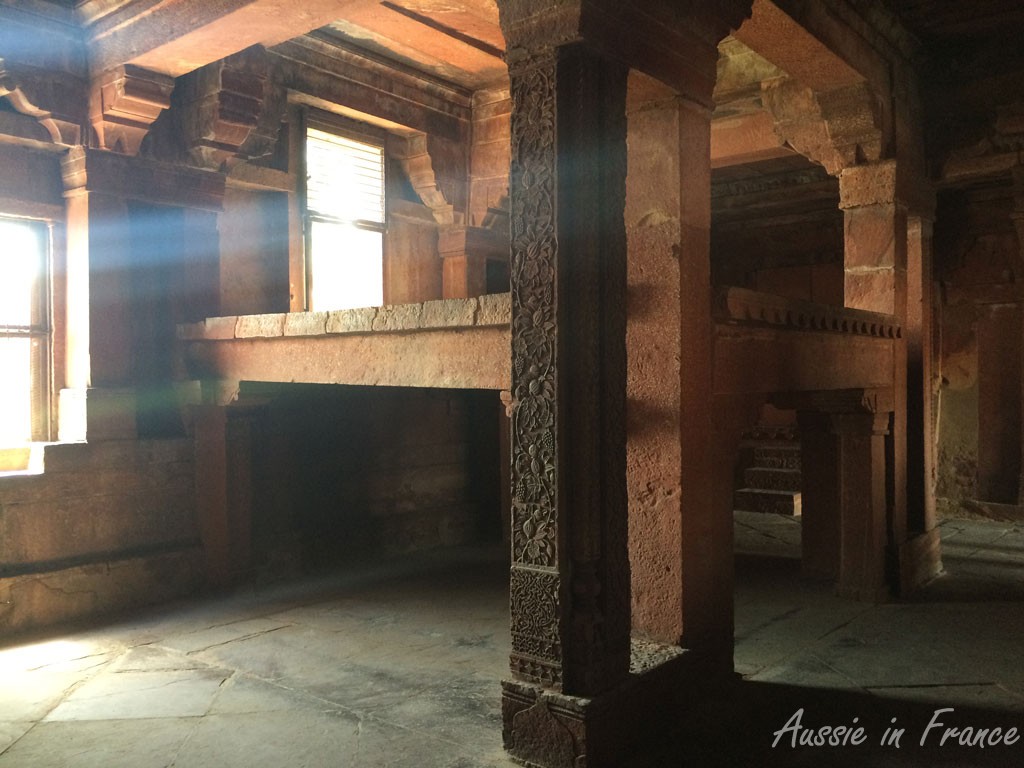 We wander around the various buildings indicated by our guide. We learn later that he didn’t show us Birbal’s House, one of the highlights of the complex. 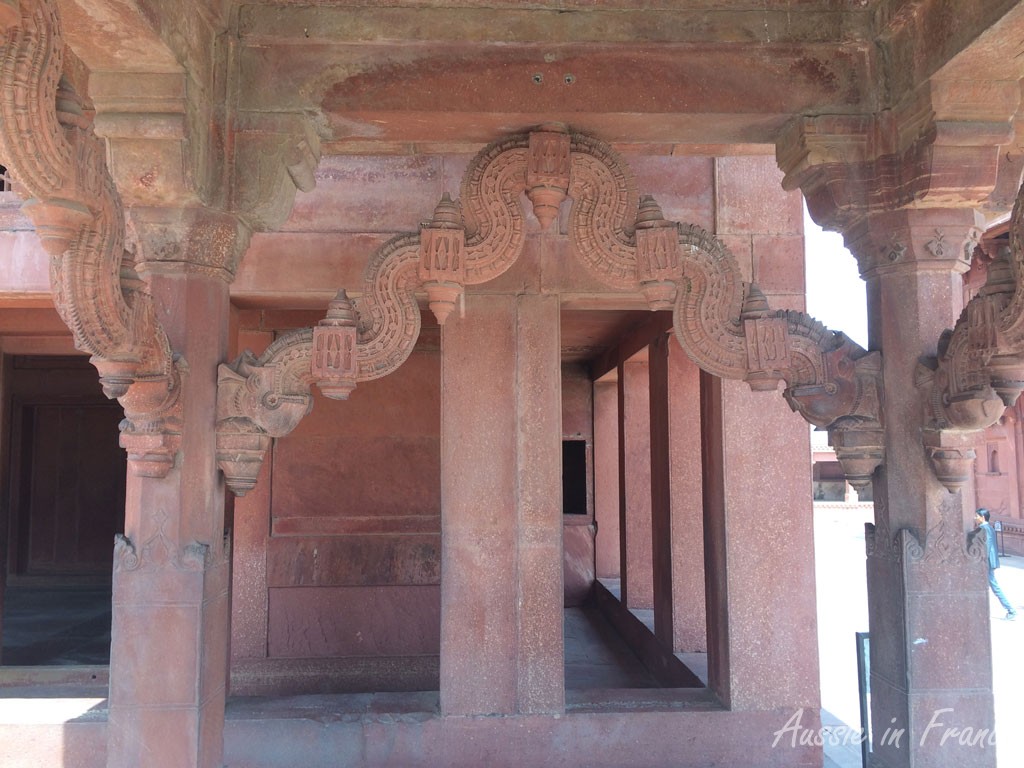 Detail of sculptures in the Koranic school for women

As we leave, Jean Michel mentions the mosque but our guide discourages us: I am not dressed adequately, the ground is hot and we’ll have to take off our shoes. I have everything I need in the car which is now too far away. A pity he didn’t mention it earlier. Jean Michel insists on at least seeing the outside, which we do not regret. The amazing structure of Buland Darwaza or the “Gate of Magnificence” was built in 1601 by Akbar to commemorate his victory over Gujarat. The Buland Darwaza is the highest gateway in the world (53.63 m high) and an astounding example of Mughal architecture. 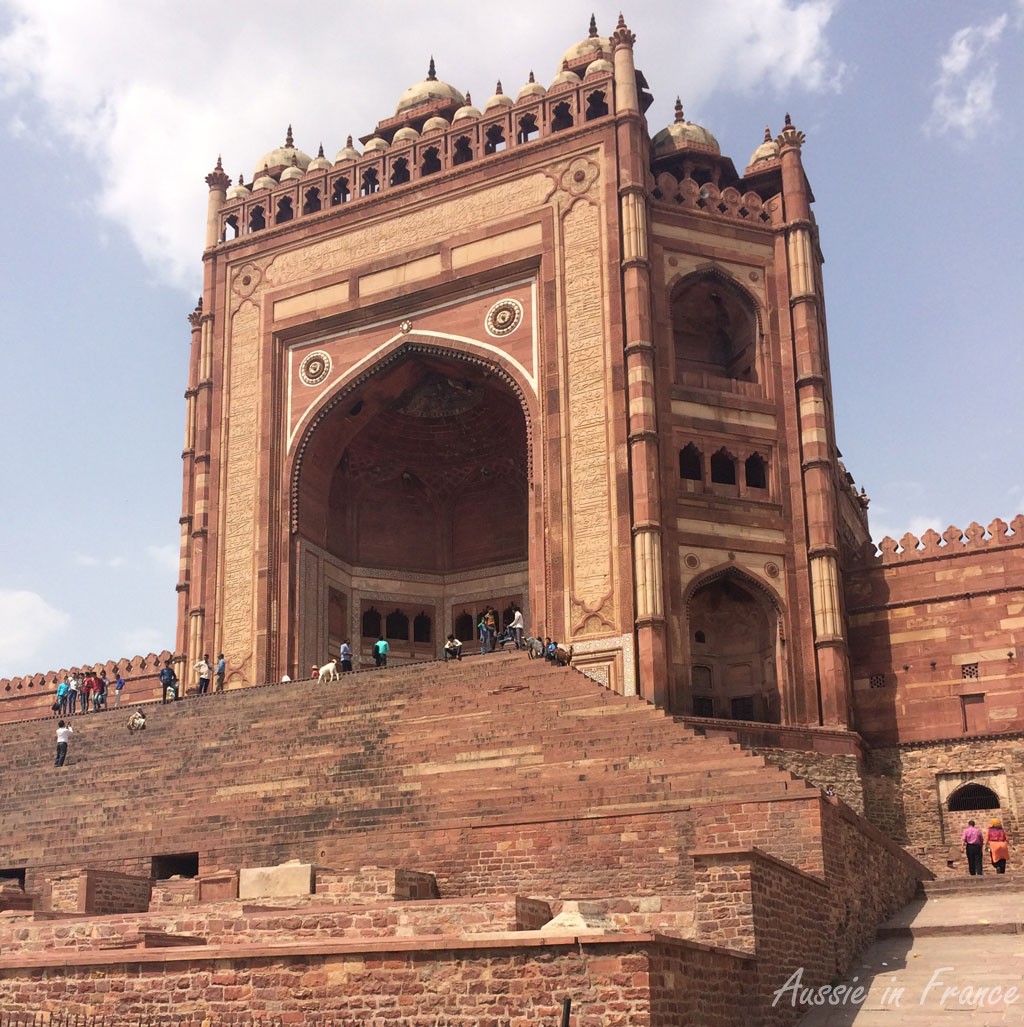 Unfortunately, we do not get to see the tomb of Salim Chisti with its ornate wooden canopy encrusted with mother-of-pearl mosaic and stone latticework windows.

As we walk back to the parking lot, the guide flags down a bus that is so full that a man is hanging halfway out the open doorway. I refuse to get in despite the guide’s muttered “it’ll be an experience – it only takes 2 minutes”. Well, in my experience, if a bus ride only takes two minutes, then it can only be a 10-minute walk. That doesn’t seem to be the case so he stops and pays for a tuk-tuk which is probably the same price as the bus anyway. 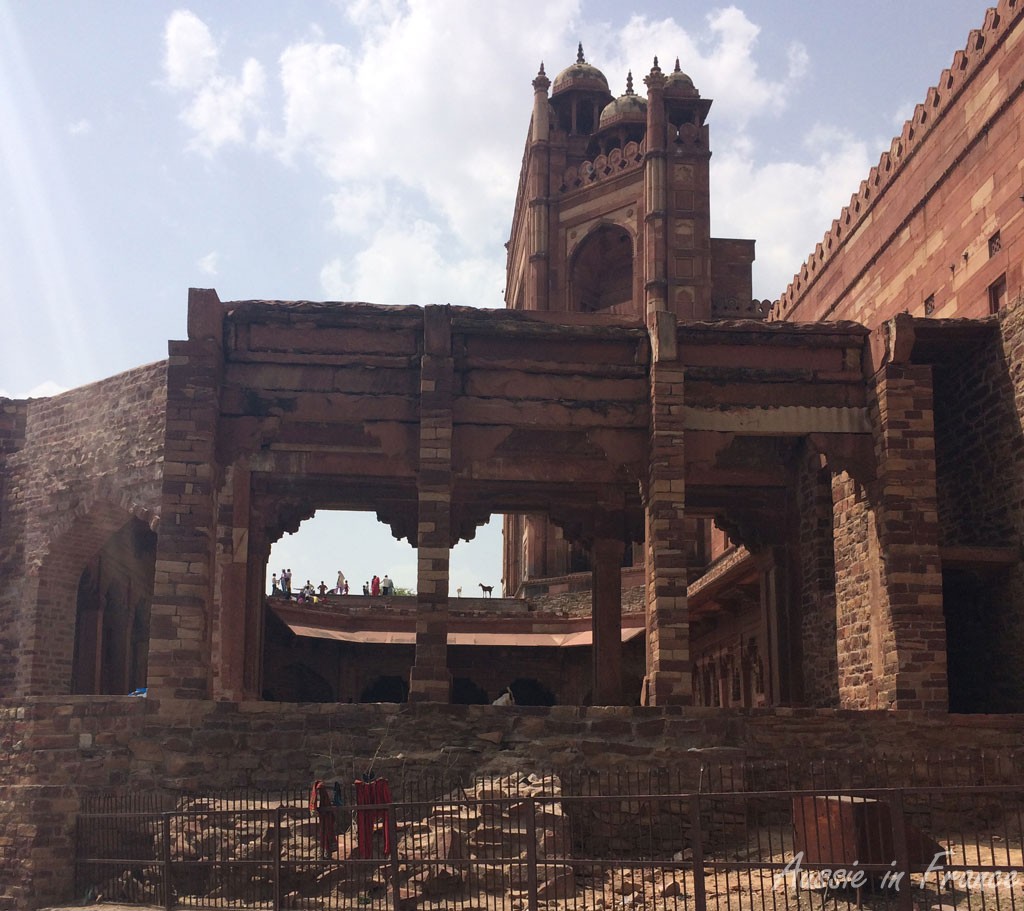 The walls of the mosque from the road

Rajendar is waiting for us in the parking lot. By now it’s nearly 2 pm and our guide gives us the choice of eating at a nearby wayside restaurant or waiting until Agra, another 38 km away which in India, as we’ve seen, means about an hour. We opt for a meal nearby and ten minutes later we find ourselves in a self-service restaurant called Ganpati Resorts. Inside, the temperature is reasonable but the buffet is outside in the sun where the temperature is at least 40°C. Also, there are flies buzzing around our table which is just inside the door. 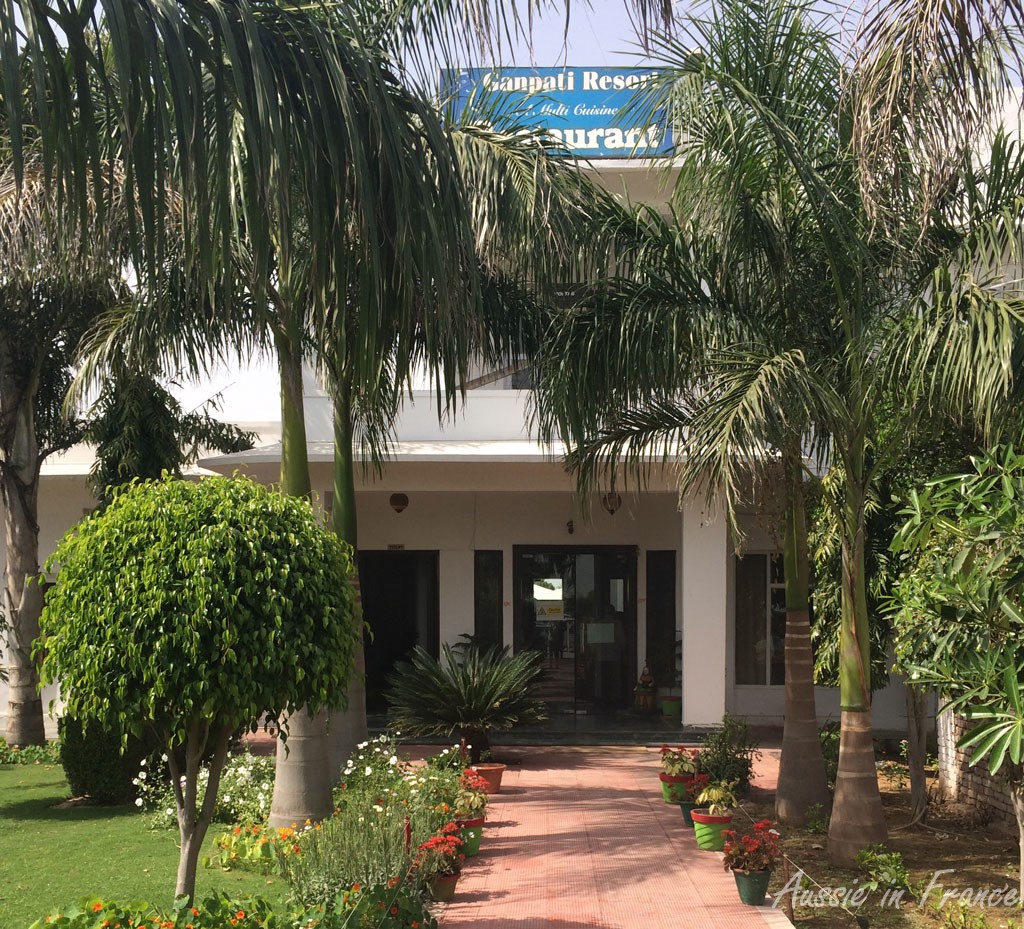 Ganpati Resorts, which looks fine from the outside

It’s the worst meal we’ve had yet – very spicy – and I have to ask at least 3 times to get naan and yoghurt. There is no soap in the toilet either. The guide pays as we still haven’t found an ATM. We refuse to give a tip. 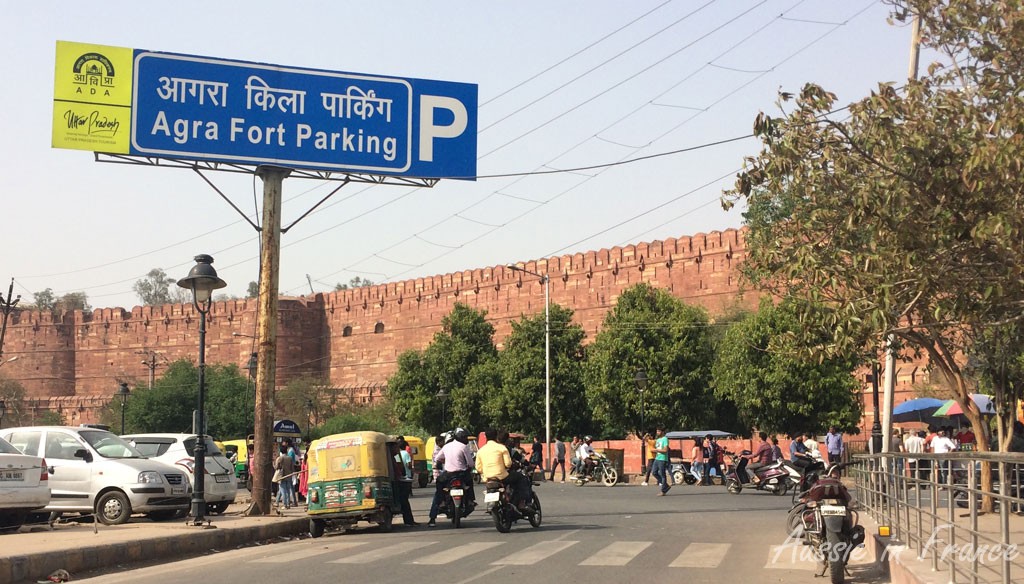 We are now expecting to go to our hotel, the Radisson Blue, so I am surprised when, at about 3.30 pm, we stop outside the Moonlight Gardens (Mehtabh Bagh) which we are supposed to visit after a little R&R. It’s still suffocatingly hot and I am getting increasingly annoyed with the guide. When I ask why we are so early, he says that the gardens close at 5 pm and we will miss them otherwise.

The hoses have been on and the ground is soaked. I am quietly looking for a way around the puddles when Jean Michel realises the problem and suggests another path. The guide rudely asks what the matter is. We can see the Taj Mahal in the distance on the other side of the Yamuna River. I have to say I am disappointed. Where is the buzz you’re supposed to get? I move away from the guide as far as I can so that he won’t upset me any further. 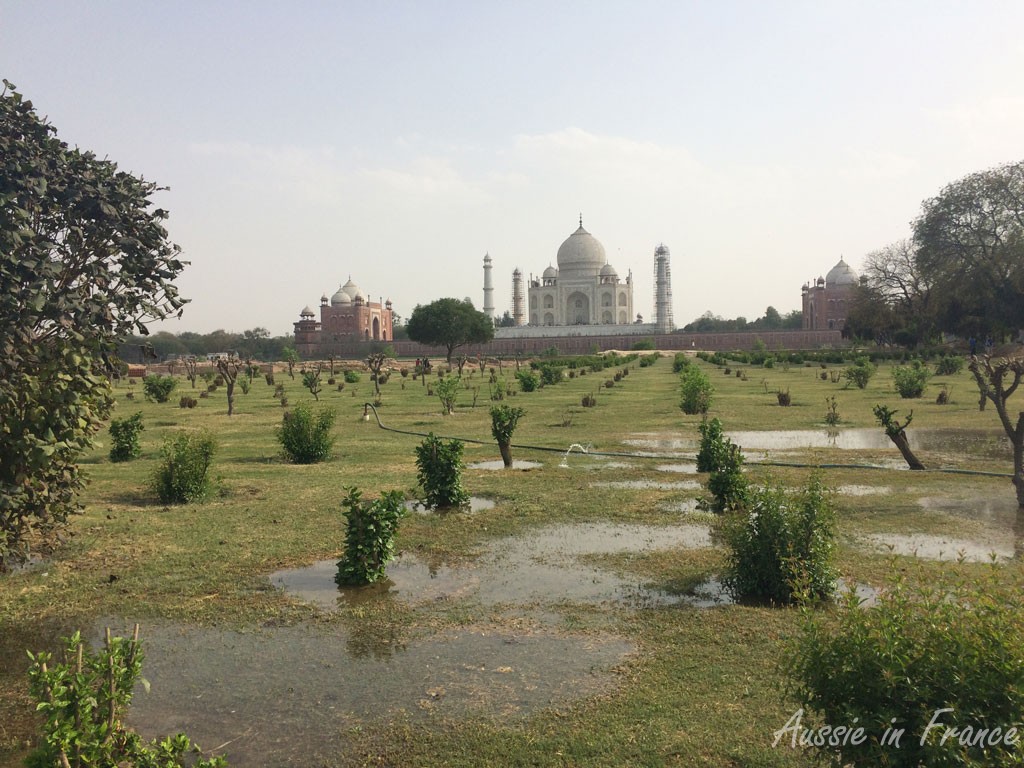 The soaked grounds in Makbati Gardens

The Emperor Shah Jahan, who built the Taj Mahal, had identified a site from the crescent-shaped, grass-covered floodplain across the Yamuna River as an ideal location for viewing the Taj Mahal. It was then created as “a moonlit pleasure garden called Mehtab Bagh.” White plaster walkways, airy pavilions, pools and fountains were also created as part of the garden, with fruit trees and narcissus. The garden was designed as an integral part of the Taj Mahal complex.

It is said that Shah Jahan wanted to build a black marble mausoleum for himself here, as a twin to the Taj Mahal, but his project never came to fruition. Frequent floods and villagers extracting building materials nearly ruined the garden. Any remaining structures fell in ruins and by the 1990s, the garden’s existence was almost forgotten. It was little more than an enormous mound of sand, covered with wild vegetation and alluvial silt.

The Taj Mahal from the other side of the river

I find the best vantage point to take a photo and hope that our dawn viewing of the Taj Mahal next day will be more satisfactory.

We join Rajendar in the car and the guide gets out about 10 minutes later having fixed a RdV with us in the hotel foyer at 6 am next morning. After he leaves, Rajendar asks me what sort of guide he is. I don’t like to be too critical but say that I’m going to ask our coordinator at the hotel to find us a replacement for the next day. He advises me to phone our overall coordinator for Trinetra Tours in Delhi, Shiva, and picks up his smartphone. When he can’t get Shiva, he phones Praveen, one of the marketing directors. I briefly explain that we are not happy with our guide who is not communicating satisfactorily with us, does not speak good French and obviously has no interest in his job. I am relieved when Praveen immediately says he will send a different guide next morning. 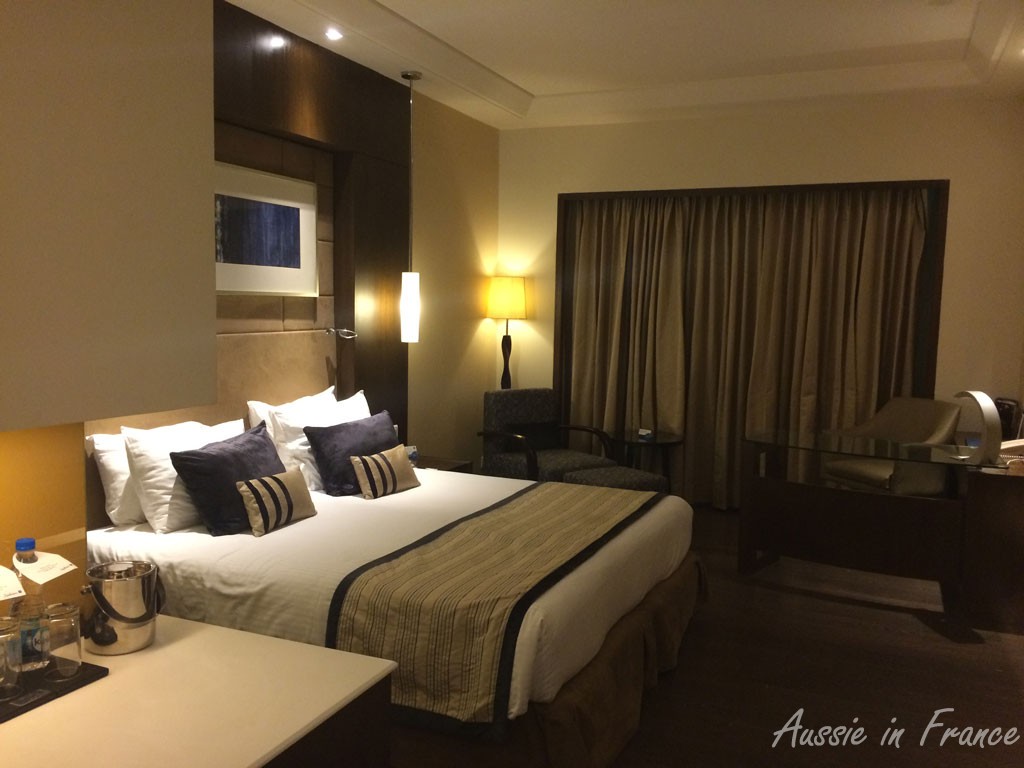 Our spacious room at the Radisson Blue

The Radisson Blue is on the other side of the river, very close to the Taj Mahal, it turns out. We are greeted by our coordinator who takes us to reception and we are soon relaxing in our large air-conditioned bedroom with no wish to go anywhere for the rest of the day. We are perfectly happy with our usual bananas and tea though we do decide to make an exception and try the Indian wine, which turns out to be an uninteresting chenin blanc. At least we won’t go home without having tasted the local wine.

We go to bed early in preparation for the morrow.

21 Responses to The Road to Agra, Fatehpur Sikri and the Moonlight Gardens