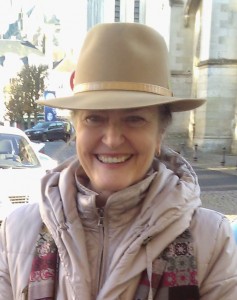 Welcome to my blog about my life in France. My name is Rosemary Kneipp and when I started blogging, I used the pseudonym of Fraussie Grouet. I’m an Australian-born translator from Townsville, North Queensland, living in France since 1975. I love sharing my experiences of living in France and showing friends and family the things I like best, initially in my neighbourhood in Paris – the 1st arrondissement, right next to the Louvre and the Palais Royal – and now in the Loire Valley where we moved at the end of October 2014. I have a second blog called Loire Daily Photo with captions in French and English.

I hope my information on the places I visit will give a new perspective to your travels. I blog somewhat intermittently, including insights into living in France and the places I travel to and reflections on the French language in Friday’s French.

I have a French husband called Jean Michel (Relationnel in earlier posts). All our kids are grown up. My son and daughter are called Leonardo (IT expert now living in NYC about to move to Boston) and Black Cat (communications & marketing manager working in New York with a sewing blog called NewYorkParisNeedle). My twin stepsons are called  Forge Ahead (medical intern) and Thoughtful (a dedicated greenie). We had an Aussie exchange student from Sydney in 2011-2012 called Brainy Pianist who features in some posts during that period. I stopped using pseudonyms in January 2013 after I stopped teaching at the university (see post below).

In 2012, we bought our house in the Loire Valley – Closerie Falaiseau – built in 1584 and moved there at the end of October 2014. We rent it out for a month or so each year and also use it for home exchanges mostly to European cities.

All photos are my own (unless stated otherwisse) and taken with a 5S iPhone.

Don’t hesitate to leave comments (in French or English) and I’d love you to join me on Facebook, Twitter, Instagram and Pinterest. You can also subscribe to be notified of new posts by email or use RSS feed. I sometimes use pseudonyms, but feel free to use your real name or a pseudonym yourself.

Facebook in particular is a wonderful way to interact with other people with the same interests and learn about other blogs you might like to read. You’ll also find more details about places to visit, eat and stay.

The blog is called Aussie in France (pronounced Ozy) because that is the name Australians give themselves. Fraussie = FRench Aussie and Grouet is the area of Blois where our  house is located.