Another Country, Another Language: from Taipei to Ljubljana

Posted on December 3, 2011 by Rosemary Kneipp 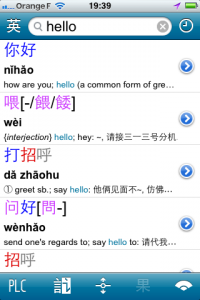 We were in Taipei on a 24-hour stopover on our way to Australia and Black Cat must have been about twelve.  The language barrier was not easy as very few people spoke English once you set foot outside the hotel. Black Cat was quite scandalised at my lack of preparation. She was used to being able to communicate with people in two languages. “Mum, we don’t even know how to say hello, goodbye, please and thankyou!”. It was a lesson to me. I’ve made sure ever since that I can say those four words in the language of whatever country I visit.  And I’ve added “excuse me” and “do you speak English” for good measure. They certainly open many doors. 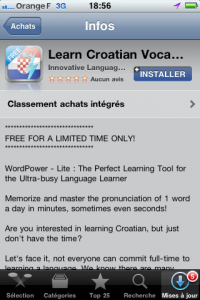 Being able to download dictionaries and automatic translation apps on your iPhone and computer definitely makes things easier. There are a lot of apps to teach you basic words and phrases along with pronunciation. Definitely a bonus when we went to Croatia last summer.  I practised away beforehand saying “dober dan” and “dobro jutro”, “hvala” and “molim” until I felt comfortable with them. I was delighted to learn that I could use them in Slovenia too.

The French have a terrible reputation with languages. I had a funny experience twice last summer in Ljubljana in Slovenia. We were in the tourist office waiting for a cycling map and I was speaking to Relationnel in French. When it was my turn, I spoke to the young man behind the desk in English. After a few exchanges he asked me where I was from. “France”. “Are you a teacher then ?” “Why ?” “Your English is too good to be French”. I had to laugh! So I explained I was really Australian. He looked reassured. 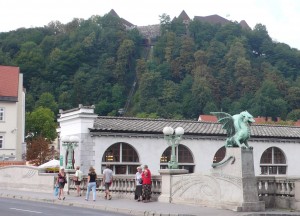 On another occasion, we were pushing our bikes up a steep hill that definitely shouldn’t have been part of the bike route, particularly at the end of the day, when a young woman asked if she could help me. I thanked her but thought I should really push the bike myself. However, she kept me company and chatted as we went along. She asked if I was Canadian. She had heard me speaking French with Relationnel but after hearing my English couldn’t believe I was French. What a reputation …

A word about the Slovenia biking experience while we’re on the subject. Ljubljana is really 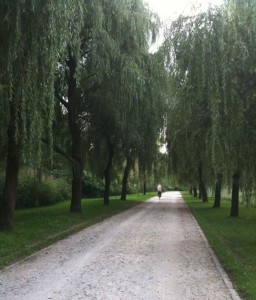 set up for bikes. They have rent-a-bikes in the street like they do in Paris and there are lots of bike paths in the city. But, for some reason, they don’t have a proper bike map. However, the young man in the tourist office found me a map that had a little dotted line around the city that was supposed to be a bike route. It was a bit worrying to see that it went off the map at times but we decided to give it a try. It was supposed to be 34 K so we left at 3.30 pm, following signs marked POT (and sometimes 88). Very occasionally, the letters PS were indicated on the ground showing a change of direction. We liked those.

Well, we started out on flat ground, riding past weeping willows and beautiful gardens and really enjoying ourselves. Twice we had to take shelter from showers of rain but otherwise the weather was fine and warm.  We wound our way through residential areas, industrial estates and low income housing all surrounded with lots of trees and shrubs. Sometimes we had to backtrack because we’d loose the POT and 88 and PS signs.  As a result, it took much longer than it was supposed to. 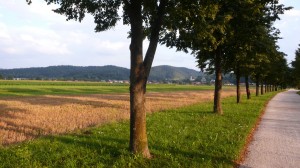 The real challenge came when we suddenly found ourselves out in the countryside, riding past fields of wheat and saw to our dismay that the road led into a forest and up a steep hill. The path had horizontal logs about every meter practically all the way along to stop the ground sliding when it rains I imagine. I don’t know how you are supposed to ride a bike up there. Even coming down on the other side was a bit dicey. I had to keep getting off so that I wouldn’t go head first over the logs. Of course, when we got out of the forest, we discovered we could have taken a road around and not up the hill. It ended up being 42 K and we didn’t get home until 9 pm by which time I was exhausted!  We found a lovely place for dinner though. And I forgot to mention – Ljubljana is one of my favourite places.

8 Responses to Another Country, Another Language: from Taipei to Ljubljana