In part 6 of my Croatian itinerary, published way back in June last year, I recounted out stay in the Istria Peninsula. The next day we left Croatia for Slovenia. We stopped at the little mediaeval town of Vodnjan (Dignano) with its somewhat dilapidated Venitian Gothic Renaissance buildings to write our last postcards.

The main square of Vodnjan in Istria

We then worked our way up the coast, skirting round Trieste where we had intended to have lunch, but the traffic was so bad that we headed for Slovenia instead. 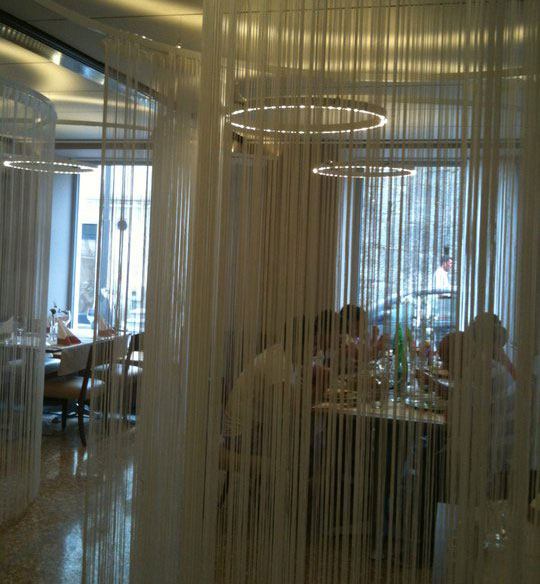 Inside the Proteus Restaurant in Postojnska

Our first stop was the town of Postojnska where we had a very cheap three-course meal for ten euro at the Proteus. Inside the restaurant, the people were sitting around tables surrounded by strip curtains. They obviously like their privacy! After Istria, everything seemed very neat and clean. 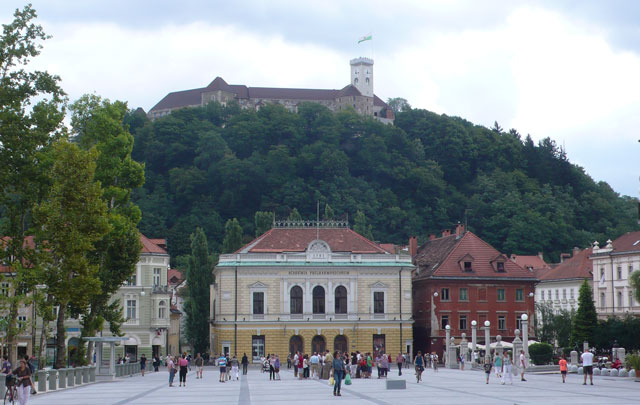 Our arrival at Ljubljana at 5 pm was a little traumatic even though the town seemed very pretty. There was nowhere to park near our hotel so we lugged our bags in the rain to Hotel Emonce. It turned out I had made a mistake with the booking and they were not expecting us until the next week! Relationnel, who had been driving all day, was not impressed. 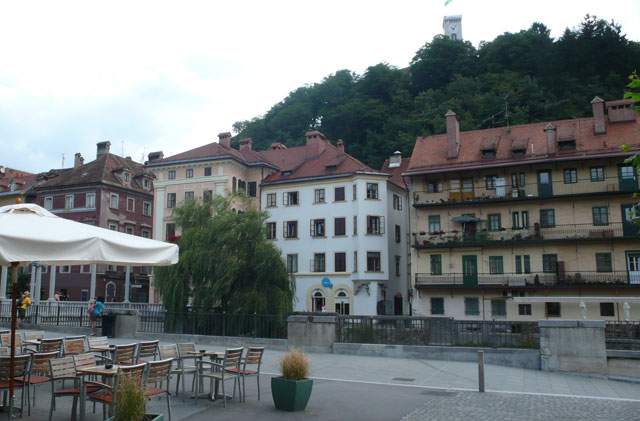 We went to the tourist office where they found us a much classier hotel called the Central Union which was offering a cheap mid-week rate and had underground parking. We dropped our luggage and went in search of an apéritif. We sat down gratefully to a glass of lovely cold Slovenian wine at the Divine along the Ljubjanica River just near the Triple Bridge. 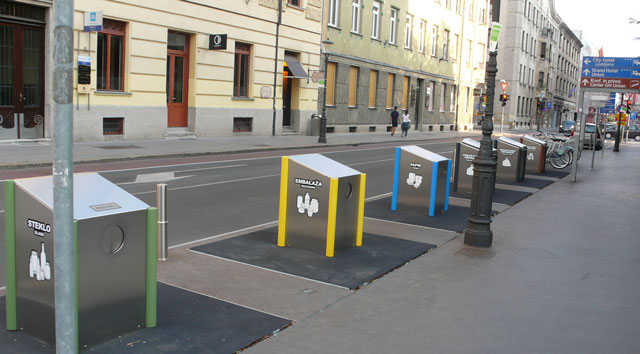 I immediately took to Ljubljana, the only large city in Slovenia with a population of about 270,000 people. I found it clean and friendly. I liked the people, the architecture and the atmosphere. There are five different sorts of recycling bins that are emptied into the ground below, electric cars, city cycles and lots of bike paths. 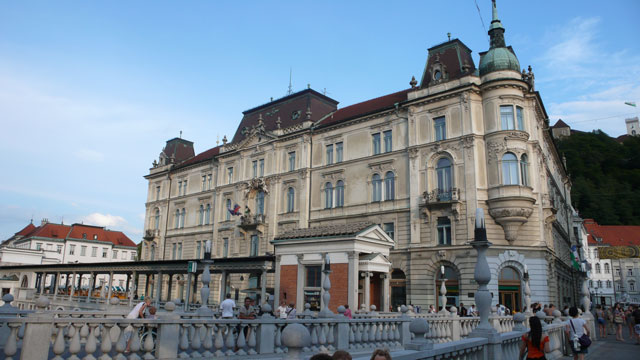 It was a little difficult to choose somewhere to eat, but I always find that’s the way when you go to a new country. It takes a while to know how everything works. We settled for al fresco eating at the Abecedarium where we had lamb cutlets and veal medallions with dumplings. Nothing special but pleasant. Afterwards we wandered round the city a bit before walking back to the hotel. 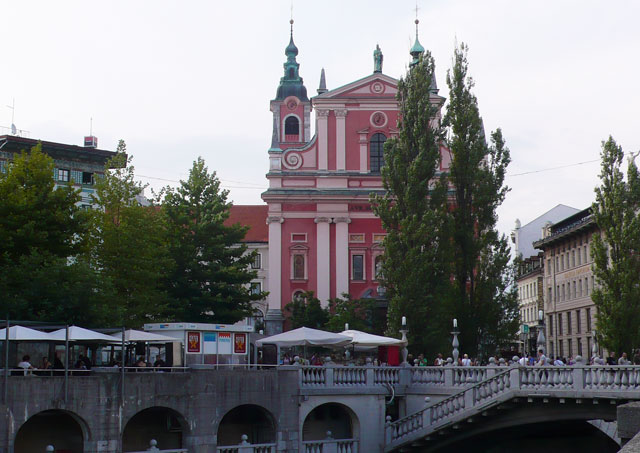 Next morning after a good sleep despite the sheet system (the same size as the bed!) and an excellent breakfst we visited the market which was rather sparse and went back to the cathedral with its lovely frescoes outside and beautiful baroque interior. 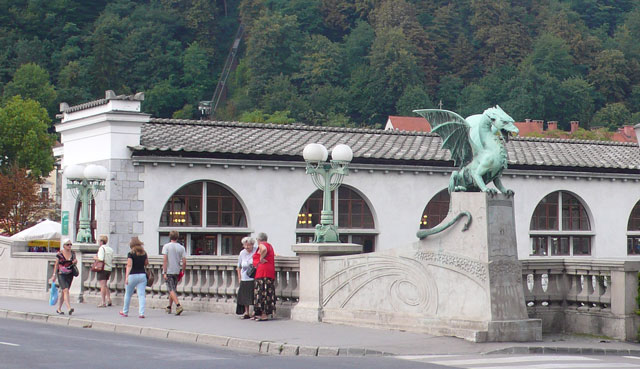 We visited the famous dragon bridge, which has given the city its emblem. We then hiked up to the castle on the hill overlooking the city and got there just as the rain started pelting down. The mediaeval castle is nothing special but the panoramic view from the top is stunning. You can take the funicular if you don’t feel up to walking. 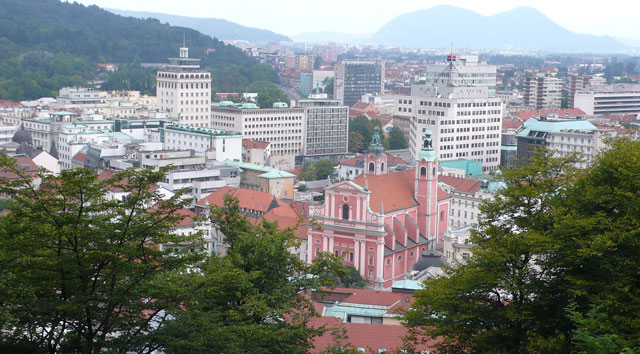 View from the castle

We then went past the strange façade of the university and into the Krizanke Summer Theatre, once the monastery of the Holy Cross and wandered about Congress Square before buying bureks (a filo pastry sknack wiht a savoury filling) at Dvor and having coffee at Solist. 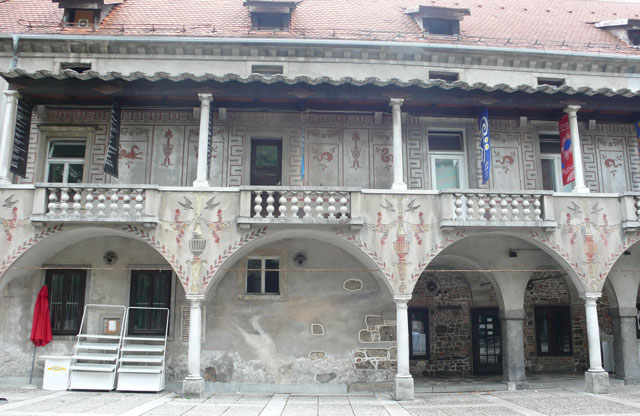 After a little nap, we decided to risk the possibilty of rain and go cycling. You can read all about our adventure in another post. It took a somewhat surprising turn! 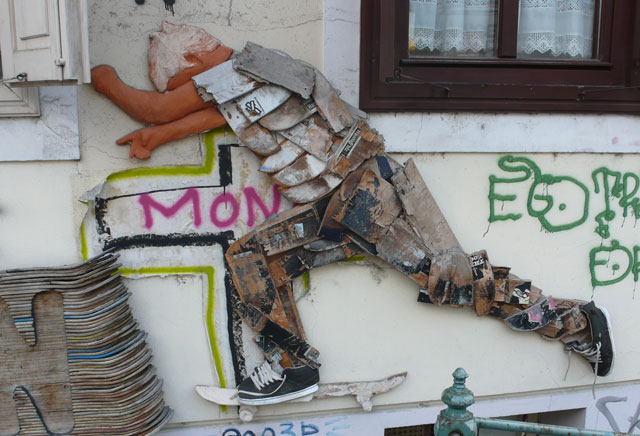 Collage above a basement clothing shop

We didn’t get back to the hotel until 9 pm, but after a quick shower, found a restaurant in Juricidece Trg. called the Okrepceurlnioa where we felt we really deserved our tagliata and Slovenian wine ! The next day, we were off on the next leg of our journey – Innsbruck.