Posted on December 8, 2011 by Rosemary Kneipp 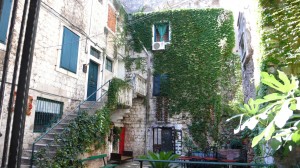 When I first talked to Relationnel about cycling in Croatia, he was most dubious. It’s full of mountains. But in the end, he agreed and we started organising the trip. I love cycling when I travel because I think you go at just the right pace. You aren’t stuck with the other tourists in the town centre and you’re able to experience places you wouldn’t get to in a car. You ride through the suburbs and out into the countryside. You see into people’s back yards and can observe them in their everyday lives. One of the things I noticed most in Croatia, for example, was that you always saw older people with babies and small children in their arms. You rarely see that in France. Babies are usually in prams. 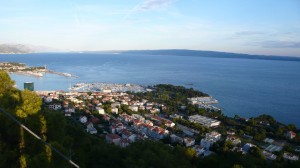 Our first cycling experience in Croatia was perfect. We had found a very handy appartment on the western side of Split, with a cycle path along the road leading directly to Marjan Hill which is on a peninsula and closed to cars. The first, very easy circuit around the hill took us past breathtaking views of the coast. We had stupidly not taken our swimsuits so couldn’t cool off in the many little inlets like the Croatians for whom it was obviously a popular family outing. When we completed the circle we saw a second path leading further up the hill. We looked at each other and decided the view would be worth the effort. It was a long hard steady climb but I actually made it without having to get off my bike. There was a marvellous lookout up the top which literally gave us a 360° view.  We made the most of it with our trusty binoculars. The ride was only 20 K but took longer than we expected. We arrived back in Split as the sun was setting. 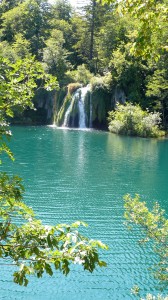 No possibility of cycling in Dubrovnik, although it was one of our favourite venues, but Zadar would have been perfect if I hadn’t picked up the famous turista from eating suspect prawns in Dubrovnik. The paths around the spectacular lakes and waterfalls at Plitvicka were not accessible to bikes so we walked. I definitely recommend going in the morning. While I was still recovering from my turista, Relationnel did the lower lakes, by far the most beautiful, in 2 hours in single file in the late afternoon. When I decided to make up for lost time two days later, we started at 10 am and  it only took a little over an hour! The site is quite magical and the colours unbelievable.

The next stop was the peninsula of Istria. There was a cycling route around our hotel but it didn’t look very interesting so we found another circuit outside Pula with its magnificent amphitheatre. We started out at the Marina and tried to follow the signs but it was not always easy. There were often steep hills and lots of stones. But the views were certainly worth it. There are very few beaches in Croatia but they have lots of little “landings” everywhere so that you can get in and out the water. During the ride, I had spied what 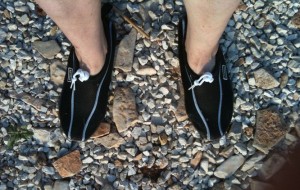 looked like a beach but was really like an amphitheatre with the steps going down into the water so we came back by car after our siesta to have a late afternoon swim, wearing the special shoes we’d bought the day before to stop your feet getting cut on the rocks. Afterwards we sat and watched everyone pack up and leave. The whole “beach” was covered with deck chairs that all had to be put away and chained together. There were even two changing tents that were folded up and stored in the bar across the road.

Then we went on to Slovenia, but that’s another story that I’ve already told.

This entry was posted in Croatia, Cycling and tagged Croatia, cycling in Croatia, Marjan Hill Split. Bookmark the permalink.

6 Responses to Cycling in Croatia