Rouen in the Rain 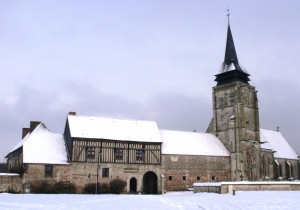 One of the sad things about Normandy is that it rains a lot. For the last four years, we’ve had snow at Christmas with particularly heavy falls last year. This year, however, it’s not cold enough so we’ve got rain instead.

This is the fifth Christmas we’ve spent in this lovely mediaeval manor house in Le Mesnil Jourdain. The main buildings form an L-shape. “Our” house, Le Logis du Porche, was built in the 15th century while the owners, Valérie and Marc Jonquez, live in the 16th century wing. Le Logis de la Garenne on the other side of the courtyard was built during the reign of Louis XIII in the 17th century up against a mediaeval motte. That, in case you don’t know, is the artificial mound on which theNormans used to build their keeps. Today it’s home to a herd of goats. There is a beautiful vaulted ceiling on the ground floor. 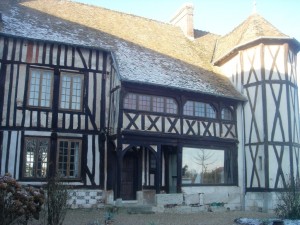 But we prefer the Logis du Porche for its huge brick fireplace, large bay window with its original grille and stone seats where the ladies used to sit with their embroidery and watch the world go by in the courtyard below, its original timbered ceiling and lovely oak panelled door. The stone walls are as thick as the length of your arm and there’s even an arrow slit! That’s on the main floor. Upstairs, one of the bedrooms has a massive low timber door with a peak hole and traces of oil lamps on the walls while one of the others has an enormous fireplace where they used to hang the meat and an original mullion window. 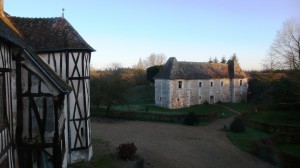 Valérie et Marc have done a wonderful job of restoring and decorating both houses, combining modern comfort with the historical charm and authenticity we love.  It was Le Mesnil Jourdain that inspired us to buy the house in Blois. Our four children usually join us for Christmas, but this year, with Leonardo in Sydney and Forge Ahead in Madagascar, there will only be four of us. We’re waiting until Black Cat arrives to decorate the tree and put up the crib. But more of that in another post. 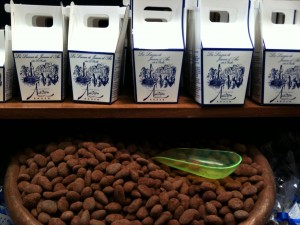 Back to rainy Rouen. One of our pilgrimages is always to Auzou’s in the main street where they sell Joan of Arc’s tears – chocolate-coated almonds! I actually prefer Rozans des Pyrénées, melt-in-the-mouth chocolates that traditionally are only made in the Pyrenees in winter and that you can only usually find at Christmas. You have to keep them in the fridge. But the other members of the family prefer praline chocolates except for Black Cat who has never liked chocolates. When she was growing up in a country of chocolate freaks, she was so embarrassed about it that she used to tell everyone that “my mother won’t let me eat chocolates.” 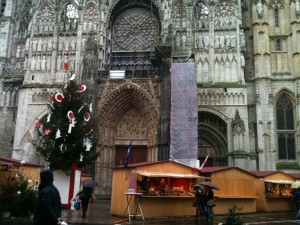 I like doing our Christmas shopping in Rouen because the historical centre is very attractive with its half-timbered houses and enormous clock tower spanning the main street. The cathedral, made famous by Monet, is always worth a visit as well. We usually have lunch at the art deco Brasserie Paul on one side of the cathedral. It’s in all the guide books so it very popular, but we still enjoy it. At 14 or 15 euros for the main dish, it’s also good value for money. It also sells real cappuccino (as opposed to the usual Norman “all-cream” version if you prefer a mid-morning or mid-afternoon break instead. Maybe next time, it won’t be raining!

2 Responses to Rouen in the Rain