No Laundry Rooms in Paris Apartments 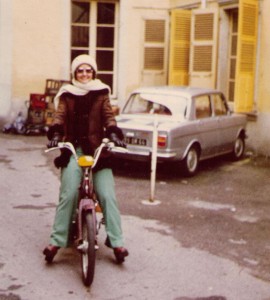 One of the first things I discovered when I arrived in France was the very different attitude towards washing clothes. I rented a room in an apartment in Pau, in the south-west of France, with two other students and we shared a bathroom. The landlady lived in a separate part of the apartment and presumably had another bathroom. There was no washing machine and nowhere to hang clothes. So I set off to find a laundromat. There were plenty of laundries and dry cleaners, but it took me a long time to track down the only laundromat. I soon learned that the unmarried teachers at school took their washing home to their mothers every weekend. I had to use my moped to go to the laundromat and lost a favourite pair of trousers off the back one day! Yeah, I can hear you – why weren’t they in a bag? 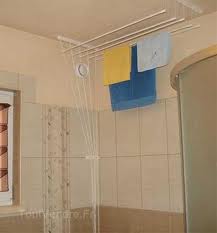 When I finally had a place of my own in Paris, it actually had an airing cupboard, something I have rarely seen since. The concept of a laundry room as such, which exists in most places in Australia (well, the ones I’ve seen anyway), is unknown here where every square metre counts. Most people in apartments either use  contraptions above their bathtubs that you raise or lower or simply put collapsible clothes horses in their living room or bedroom. Bathrooms are rarely big enough to take them except for one that opens up on top of the bathtub and that you have to remove before your bath. One of my friends dries her clothes on the heated towel rack.

Whenever I go to Black Cat’s place, there is always someone’s washing on the clothes horse in the small area in front of one of the bedrooms and the bathroom that also contains the oven and microwave. Relationnel’s kids, who live in a separate flat down the road from us, hang theirs on a wall contraption in the kitchen ! There is absolutely nowhere else. Must have been a shock for our Australian exchange student  Brainy Pianist. 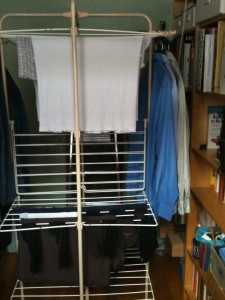 We actually have a room in our apartment where we can hang our washing out of sight, but only because I divided our large bedroom into two using very high bookshelves to create a dressing room. You have to be careful about ventilation though, because hanging wet washing near clothes containing wool in a heated room can cause havok. The mites had got to Relationnel’s suits before we discovered our error. Now we put them away in plastic covers after they’ve been dry cleaned and he uses a cupboard in another room (my office!) the rest of the time. I have a very high clothes horse that can take three loads of washing and has clever bits on the side that each take 4 shirts.

But that is not a standard installation. When we go to gîtes (holiday houses in the country), I’m always amazed at the laundry facilities (or lack thereof). These are houses in which you could presumably have some kind of system to dry your clothes effectively. Sometimes there are (dirty) outside lines always in your line of vision but never clothes hoists. But you can’t really use them between October and May and then only when you’re absolutely sure it’s not going to rain before you get back from your day’s excursion (provided you remember to put a load on as soon as you get up). 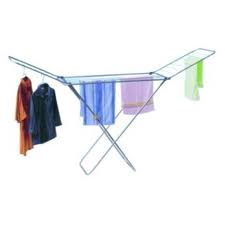 They usually give you a collapsible clothes horse, often a bit rickety from over-use, but I haven’t worked out yet what sort of clothes you’re supposed to put on them apart from socks, underwear (but not singlets) and children’s T-shirts. You certainly can’t put adults’ shirts on them (and there is rarely a rod in the bathroom to hang them on) and they aren’t wide enough to take a T-shirt properly. If you do resign yourself to bunching it up, you then eliminate all the rungs underneath. Some of the clothes horses have wings so that you can hang up shirts but once they’re up, there’s no way you can get around them.

Then there is the problem of sheets and towels. My solution is to dry the towels in the drier and schedule the sheets so that I can fold the top sheet in half and hang it over the rod in the bathroom (it’s just wide enough) in the morning so it’s dry by evening and put the fitted sheet over the clothes’ horse. When I used to wash the kids’ sheets (and clothes) as well, the schedule was very tight! I was so relieved when they finished school and got their own washing machine (I didn’t feel I could ask high school children to look after their own washing).

And I haven’t told you about the washing machines yet …

* Tancarville is a trademark for a type of clothes horse that came out at the time the Tancarville suspension bridge was built.

This entry was posted in France, French customs and tagged clothes horses, washing in France. Bookmark the permalink.

2 Responses to No Laundry Rooms in Paris Apartments