Washing Machines I Have Known 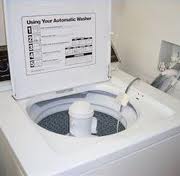 I grew up in North Queensland with one of those enormous top loading agitator washing machines that could wash huge loads in record time. We had a drip dry cycle which meant that the machine stopped after the last rinse and you could remove whatever you wanted, such as a drip-dry shirt, drain it on the draining board over the huge aluminium sink next to the machine, put it on a hanger and then hang it up under the house (our house was on stilts), dripping water over the concrete floor and yourself in the process. All of which was of no importance because the water had disappeared within an hour. You didn’t even get your shoes wet because you were bare foot anyway. 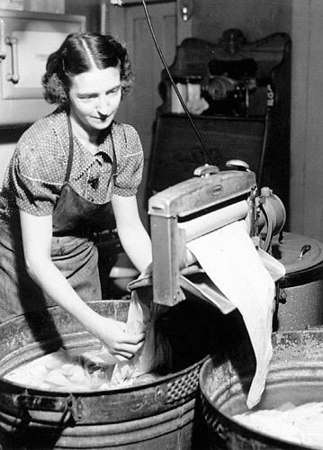 This is not my mother! Photo credits : see link below

When we went on holidays to the Island, we stayed in Kooyang Flats which had a laundry down the back with a wringer machine. My sister and I were coopted into helping Mum with the washing. We loved turning the wringer and it was really quite a game, provided it didn’t last too long. Except for Mum of course. She must have hated it! Back breaking work for the woman who actually had to wash clothes for six people when she was on holiday, knowing that her huge agitator machine was sitting idle at home.

As I told you in a recent post, my experience with washing machines when I moved to France was somewhat different. Initially, I just used a laundromat. Speed Queens are used worldwide I’ve discovered. My first machine was a front loader tumble machine and I’ve never had anything else. It was in the kitchen though. I was horrified the first time I saw a washing machine next to someone’s fridge. There’s no real reason it shouldn’t be there, but it seemed strange. There are three basic reasons for this: practically no one in an apartment has a laundry room, the bathroom’s usually too small and you need a water connection. 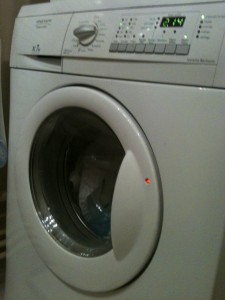 I always made sure I washed the clothes when Leonardo was awake because he used to sit mesmerised in front of the machine the whole time. We didn’t have a TV then. He’s always been mechanically minded. I like to think that I was partly responsible for that. If you’ve ever used one of those machines in France, you’ve probably wondered why the cycles are so long. My normal 40° cycle is 1 hour 17 minutes (my current machine has an electronic display) and the 60° cycle is 2 hours 15 minutes. Well, the reason is very simple even though it took me ages to discover it. They are all connected to a cold water supply so they have to  heat up the water which obviously takes time.

When my parents used come to my place on holidays in the winter (I was living in a house in the suburbs of Paris at that time with a sort of back veranda next to the kitchen that had very handy lines that I used during the summer months), they would insist on drip drying their clothes. The only thing they didn’t seem to be able to quite comprehend was that, number one, it was cold outside which meant that it would take days for the clothes to dry, and number two, the dripping water didn’t magically disappear the way it did in North Queensland. I didn’t have any drip-dry clothes myself. 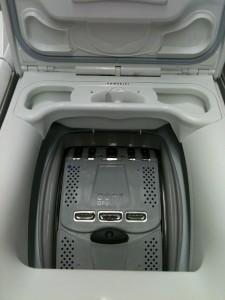 But there are other types of washing machines in France that I have experienced when on holidays in the country. They are top-loading tumble machines. Inside, there is a drum that revolves clockwise from the back to the front of the machine which means that the drum has to be tightly closed or the clothes will fall out. It comes with a unique opening/closing system where you have to match up some catches that are not easy to identify, then press on a not-always-obvious button. Of course few people really know how to manoeuvre the closing system and the opening has to be in the right place for you to do so. When the machine stops, the opening is usually at the bottom of the machine. Then as you take the clothes out, you can be absolutely sure that a baby sock will slip down the side of the drum, unbeknown to you, and cause the mechanism to seize up next time the machine is used. This is not necessarily your baby sock of course. You may just happen to be the next guest. For a long time, these machines were incomprehensibly the most popular in France. They still are to a certain extent because you can get ones that are 40 cm wide instead of the usual 60, a big boon in small bathrooms and kitchens. N’est-ce pas Leonardo?

10 Responses to Washing Machines I Have Known