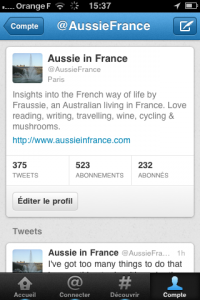 Until I started blogging last October, I didn’t even know what Twitter was. Not that I’d taken much interest. But my “how to become an expert blogger” course said it was important to sign up to as many social media as possible. So I asked Black Cat about it (she’s a communications manager after all so she should know) and started checking it out. Basically the purpose of Twitter is to write short updates on your life/job in 140 characters or less including spaces. To do so, you have to have a Twitter account and a Twitter handle. My is AussieFrance, for example.

Who reads the tweets, as they are called? Your “followers” do. Whose tweets do you read? Those that you are “following”. How do you follow people and how do they follow you? Well, after you’ve created your Twitter account, by going on www.twitter.com, you fill in your profile. The idea is to introduce yourself in a few snappy words. My profile is “Insights into the French way of life by Fraussie, an Australian living in France. Love reading, writing, travelling, wine, cycling & mushrooms.” followed by Paris, and my blog address.

I don’t know how “snappy” it is but I figure it contains most of the information people need to know about me. Now, if you go onto # Discover, you’ll get a few prompts such as “Who to follow” and “Find friends”. The “Who to follow” is based on people with similar profiles. You can click on one of the little icons and see their profile. If you think you’d like to hear what they have to say, you click “Follow”. They will be notified by email and can either follow you in turn or not. They can be individuals such as me or organisations such as the NY Times or the Guardian, in which case, you’ll see Tweets about the latest news, etc. 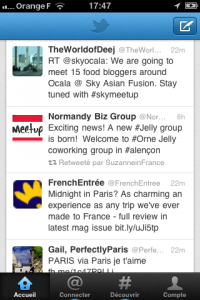 If they are bloggers, they will probably be tweeting about their latest posts or something they sell. Once you are following someone, you can tweet them by name, using @. For example, if I want to check whether varieties of wine take a capital letter in English e.g. merlot or Merlot, I can check with Guardian style guide by selecting them and asking the question. They’re pretty good at answering even though they have 19,000 followers! One can only assume there’s more than one person … To reply, you simply click on reply!

There are other ways of finding followers but once you get the hang of it, it’s fairly simple. Once you’re following someone, you can check out who they’re following and follow suit. Another thing you can do is “Retweet” which is similar to the Facebook “Like”. You like someone else’s tweet so you retweet it to all your followers. Using a smart phone is the most useful way of reading and sending tweets. There are lots of applications. I use the official Twitter one. I downloaded TweetDeck as well but haven’t really taken the time to see how it works. Twitter seems more intuitive.

Then there are hashtags as in #. They’re used to mark keywords or topics in a Tweet so users can categorise messages e.g. if I’m tweeting about a restaurant in Paris, I can put a hash next to and other users can then click on it to find another tweets on the same restaurant. I don’t use hashtags much for the moment, but it’s my next move!

All that to explain that the new heading on the right of the blog “What I’m Doing” actually corresponds to my Tweets. The funny website addresses are a shortened form that happens automatically when you type in an URL. You can also use Bitly, for example, to do it for you. It saves a lot of space when you have very long addresses such as http://www.aussieinfrance.com/2012/01/washing-machines-i-have-known/ shortened to http://t.co/5g1LLC53!

My latest Twitter experience is a Tweet-up organised in Paris among English speakers. It was held at O-Chateau, a wine bar in rue Jean Jacques Rousseau, just down the road from me. It was great meeting up with people whom I’d already seen on Twitter, including two Australians – Andrea from www.destinationeurope.net and Carina from http://www.carams.fr/blog/. Don’t forget to check out the other blogs and sites in the column on the right from time to time.

This entry was posted in Lifestyle, Paris and tagged O-Chateau, tweet-up, tweets, twitter. Bookmark the permalink.