Powerwalking to the Pont Neuf – Part 2 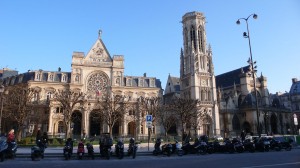 It’s not that I’m doing any powerwalking at the moment. It’s too cold. Today, the temperature got up to 1.5°C and there’s sun, but it’s still a little chilly in the Tuileries Gardens and along the Seine with that Siberian wind blowing through. But I got a little side-tracked last time before I got to Saint Germain l’Auxerrois which is connected by a very tall belfry to the 1st arrondissement Town Hall that Black Cat thinks is a good wedding venue. 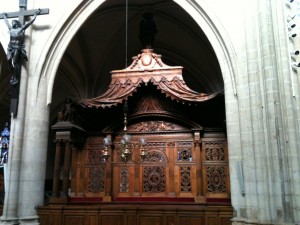 It was built in the 7th century in what was to be the centre of Paris up until 12th century and was the first Christian basilica. I’m sure you know what the difference between a basilica and a cathedral is. It took me ages to understand. A basilica is simply an important church building designated by the pope as having some special spiritual, historical or architectural significance. As far as hierarchy goes, the basilica is higher up on the scale than a cathedral. 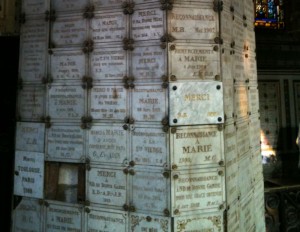 So the oldest surviving part of the church today is the beautiful 12th century Romanesque tower. Most of it was rebuilt in the 15th century. Because of its location, it became a favourite with the royal family after the House of Valois returned to the Louvre Palace in the 14th century. You can still hear one of the bells, called Marie, struck in 1527. I think it’s great that bells have names. We visited a very interesting bell foundry on Lake Annecy one rainy day last summer. 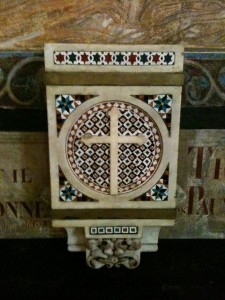 Anyway, Saint Germain l’Auxerrois has had a somewhat checkered existence. When they renovated it in the 18th century, they took out the jubé (you have to go to Saint Etienne-du-Mont in the 5th to see one now) and some of the original stained glass windows. During the Reign of Terror (7th June 1793 to 27 July 1794 when Marie Antoinette was beheaded), it was converted into a place to store fodder, a printing works, a police station and even a saltpeter works to make gunpowder. Despite several other attempts at demolition, it was eventually restored by Viollet-le-Duc, who was also responsible for renovating Notre Dame, and returned to the Catholic church in 1840. 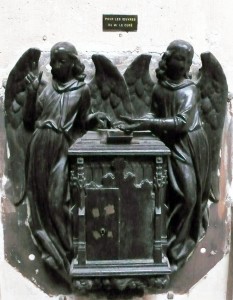 Poor box for the curé's charities

Then about twenty years later, they started tearing down the delapidated buildings around it and threatened to demolish it again. Fortunately it was defended by Baron Haussmann who suggested drawing inspiration from the church to build a Town Hall. So they designed an identical façade with an adjoining flamboyant gothic style campanile.

One of the finest pieces inside is a monumental 16th century Flemish altarpiece in one of the northern chapels showing the passion of Christ, a gift to Louis-Philippe in the early nineteenth century. There’s another altarpiece from the north of France made of sculpted wood with painted doors in the southern ambulatory, depicting scenes from the life of Mary.

There is also a pulpit built in 1635, an organ from Sainte-Chapelle, a beautifully carved vestry pew made for Louis XIV and his family in 1684 and a wrought iron gate built in 1767. You’ll find a 13th century statue of Saint Germain d’Auxerre in the Virgin chapel and a 16th century statue of Mary the Egyptian. 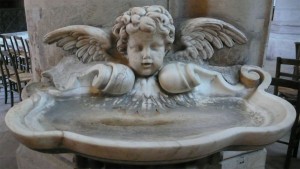 But what I like are the ex-voto pillar with all the thank-you plaques to Marie, Notre Dame de Bonne Garde (Our Lady of Safe Custody), the Moorish-style poor box with its mosaics, the cherub holy water fonts, the curé’s poor box and the beautiful flamboyant gothic door near the sacristy.

3 Responses to Powerwalking to the Pont Neuf – Part 2