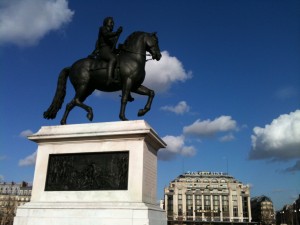 Not that the Pont Neuf’s really new – in fact it’s the oldest remaining bridge in Paris – but it was new at the time so that was what it was spontaneously called. If you’ve ever been to Venice and seen the Ponte Vecchio, you’ll have an idea of what most bridges used to look like in mediaeval days. The Pont Neuf, completed in 1607 during the reign of Henri IV (which is why there’s a statue of him halfway across) was the first bridge not to be covered. It was recently renovated and is now nice and new again. 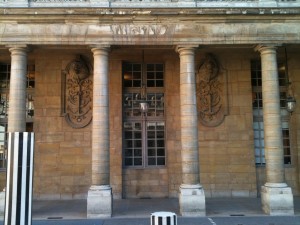 Anyway, I decided to go in the opposite direction today, starting with the Galérie des Proues (as in prow ergo all the anchors) which is the only remaining part of Richelieu’s palace which is how the Palais Royal all started. Then past the Buren columns and Arago’s meridian plaque, across Rue de Rivoli and through the first part of the Louvre until I reached the glass pyramids which are stunning on a sunny day. Down to the left and into the Place Carrée with another fountain. Right towards the river, opposite the Pont des Arts where they have the padlocks and left down towards the Hôtel de Ville. 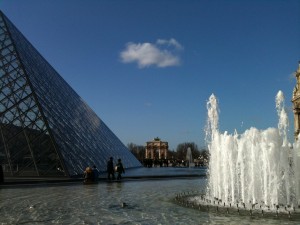 I think everyone’s heard the jokes about tourists mistaking the town hall (Hôtel de Ville) for a place to stay, but Actor Brother, who’s a country boy at heart, went one better. It was his first time in France and he’d rented a car and headed south (with his 12-year old son sitting in the back chanting his mantra “Dad, right is right, left is wrong”). It was getting late and he couldn’t find a hotel. Being Australian, he was expecting to see a motel appear at any time. Finally, he saw a big sign, “Hôtel de Police”. He headed off the highway, followed the directions and found himself in front of an unlikely looking building but, you know, it was France, and you could expect anything.

As he walked in, with his son close behind him, he realised something was wrong. “Euh, un hôtel?” he said in his basic French. The gendarme looked at him rather blankly but fortunately, a very helpful lady realised what was wrong and directed him to a more suitable place to spend the night than in the police lock-up! 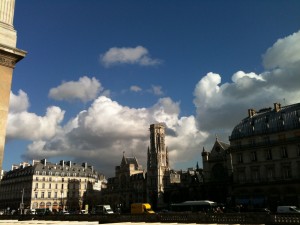 But the one I was walking towards is not the “mega hôtel de ville” as Leonardo so aptly used to call the palatial building opposite Notre Dame that is home to the Mayor of Paris, but the town hall for the 1st arrondissement. It’s still not bad as far as neo-renaissance buildings go. Black Cat has got her heart set on getting married there, but she’ll have to get a move on because once Relationnel retires and we move to Blois, it’ll be too late.

In France, there’s none of that getting-married-in-a-garden-or-on-the-beach business that goes on in Australia. Here, you can only get married in the town hall of the place of residence of one of the spouses (or their parents if you can claim you’re still living at home). And having a church wedding doesn’t do away with the civil ceremony either which can complicate the logistics a bit.

I was going to tell you about the church of Saint Germain l’Auxerrois next door, a favourite with Valois royal family in Renaissance times, but I got a bit distracted and I wouldn’t like leave out any of the interesting bits so it’ll have to wait for next time.