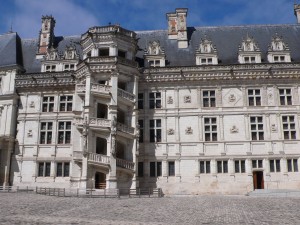 Sunday being a day of rest, we decided to have a late brunch then visit one of the many châteaux in the Loire Valley with Thoughtful and Brainy Pianist who had come to spend the weekend with us. In the end, we decided to go to Blois Castle, particularly as it was open between 12 and 2 pm, in order to escape the Easter weekend crowds. Once we got there, Relationnel and I were both amazed that we hardly remembered it at all from our last visit a few years ago. 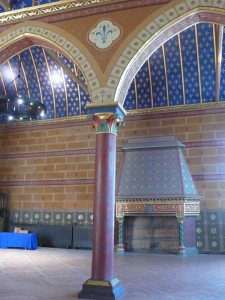 The château is right in the middle of the town, overlooking the Loire River, and encompasses several different architectural styles from mediaeval times to the 17th century. I won’t go into its very complicated history. Suffice to say that it all began in about the year 1000 with a rather horrible fellow called Thibaud the Trickster. Three of the original mediaeval towers still remain. One of the main features of the period is the magnificent hall of justice or Salle des Etats built in the early 13th century. 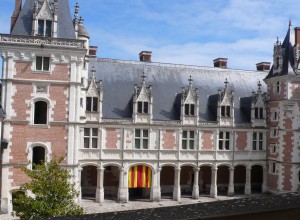 At the end of the 14th century, the château was bought by the Orleans family and nearly a century later, Duc Louis d’Orleans became Louis XII and brought his wife, Anne de Bretagne, and his court to Blois. They modernised it all, so to speak, with stairs at each end and balconies  on the first floor and decorated it with their emblems, the porcupine for Louis and the hermine for Anne.

François 1er, whose salamander is ever-present, lived in the château after he ascended to the throne in 1515. The Duc de Guise was assassinated in the King’s Chambers on the orders of Henri III in 1588 after plotting to take over the throne and Catherine de Medicis, wife of Henri II (son of François 1er) and mother of Henri III, died there the next year at the age of 70.

The interior is extremely rich and colourful with many fine fireplaces and majestic pieces of Renaissance furniture. We could see how they inspired the Henri II (or Neo-Renaissance) buffet, sideboard, tables and chairs now decorating our new Renaissance house !  I particularly liked the toad-foot feature on one of the buffets and the many beautiful firebacks. Any one of them would look just perfect in our upstairs fireplace.

There is also a lapidary section with gargoyles, statues, pediments and other bits and pieces taken from buildings on the site. 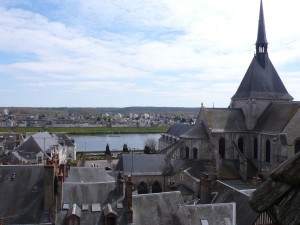 The grounds around the château offer wonderful views of the rooftops of the city of Blois and the Loire River and an excellent view of the city’s most interesting church – that of Saint Nicolas, built in the 12th and 13th centuries, a combinationof both Romanesque and Gothic. We couldn’t quite see our house because of the trees but we could pick out the general direction. 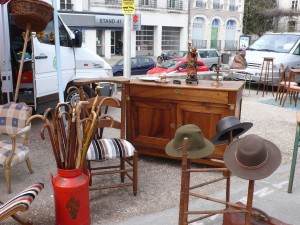 After our visit we discovered a brocante on the esplanade along the river which takes place on the second Sunday of every month. Relationnel was not keen because he said there were obviously only professionals. But we managed to find a walnut bedside table for our bedroom and three long-handled gardening tools. While he went off to get the car, we rooted around but didn’t find anything else worth buying.

16 Responses to Easter Sunday in Blois