Ok, just forget what I said yesterday about not being sure what I think about Gaudi’s basilica. It is the most wonderful construction I’ve ever seen. Inside it is absolutely dazzling, breathtaking, overwhelming. There are no words to describe it and no photo to do it justice. It is the most amazing well of light imaginable. The brightly colourful stained glass windows which anywhere else would be gaudy, are quite superb. 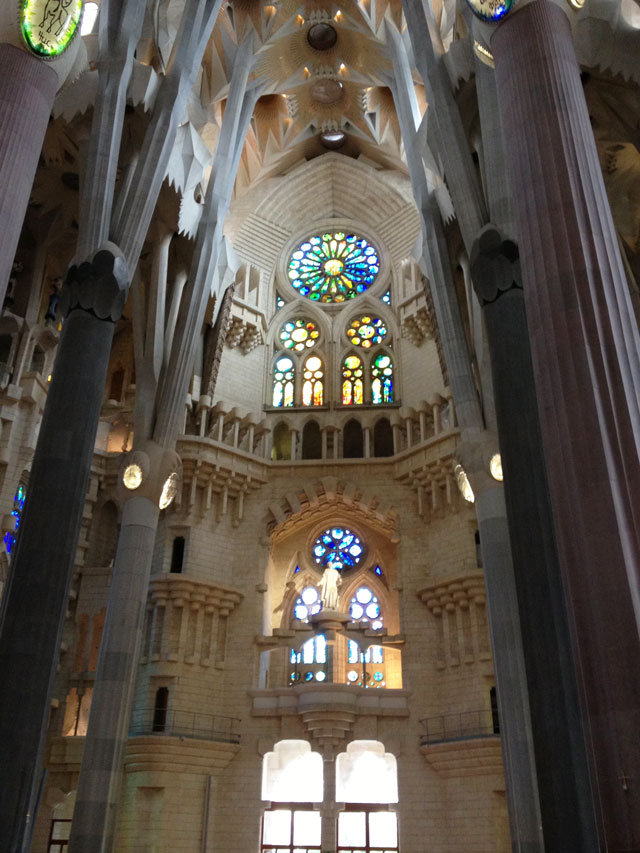 End of the transept on the Passion side

Gaudi was just only 31 when he began working on the cathedral in 1883. It evolved considerably during his lifetime, becoming more and more audacious. Sadly, he was run over by a tram at the age of 73. Some of the mock-ups and nearly all the plans were destroyed by fire during the Civil War in 1936. 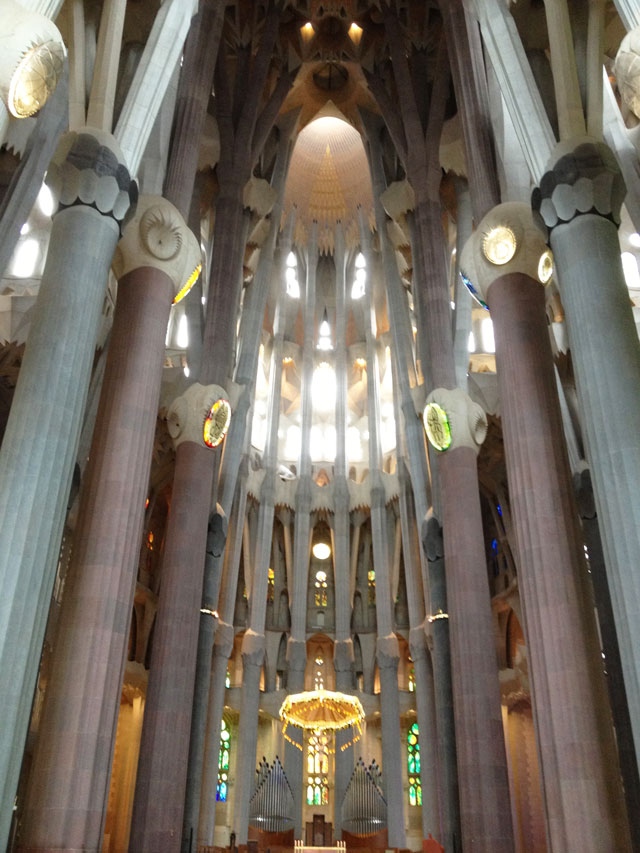 Although it felt like the biggest church I’ve ever been in, it’s amongst the highest but not the longest. The longest of the five naves is 90 metres long and 45 metres wide while the transept is 60 x 30 metres. The highest point is 45 metres from the ground. In comparison, Notre Dame is 127 metres long x 48 m wide, the transept is 48 x 14 metres and the height is 35.5 metres. Beauvais in the north of France holds the world record with 48.5 m. 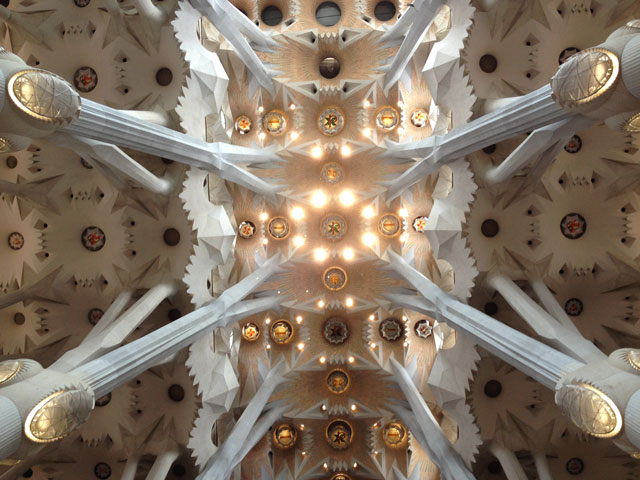 Keystone on the nave

The pillars, which split into two halfway up to remove the need for flying buttresses, represent trees in a forest with leaves at the top but the symbolism isn’t all that obvious. The pillars themselves have a special spiral design with fluting that increases in number as it gets higher. 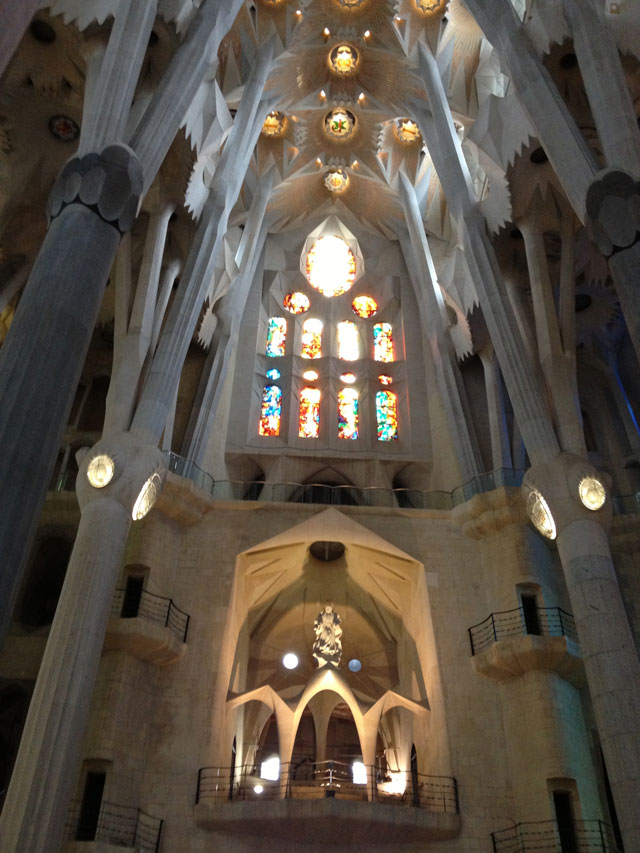 End of the transept on the Nativity side

Although the inside is fairly complete and two of the façades – the Nativity and the Passion – are finished, there is a still a third façade, the Glory, under construction along with the central spire. Up closer, the seemingly naive statues on the Passion façade are true works of art by a controversial Catalan sculptor and painter, Josep Maria Subirachs. Those on the Nativity side are much more conventional and characteristic of Gaudi’s naturalistic style, very ornate and decoratd with scenes and images from nature. 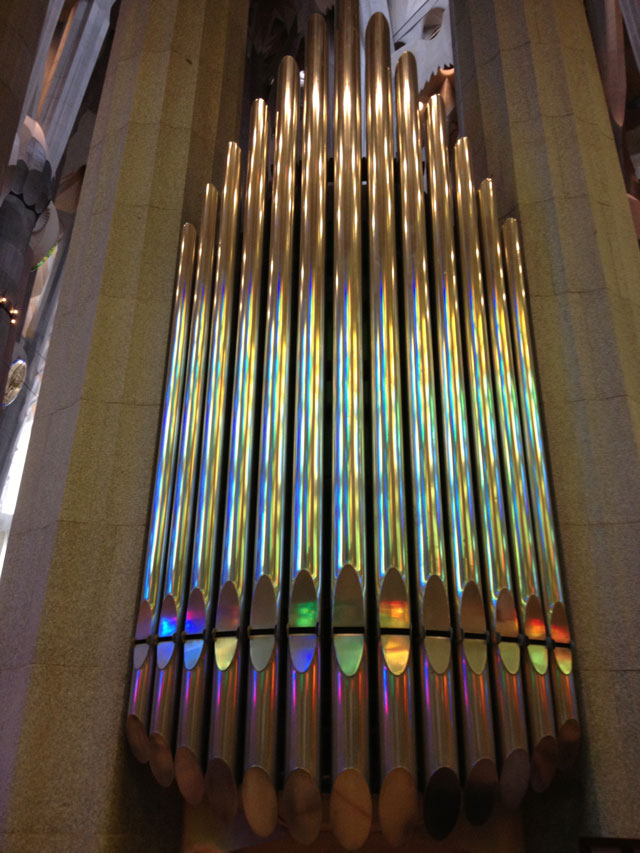 Organ reflecting the colours from the stained glass windows

Surprisingly, the crypt, which was built first, by another architect, is very classical.  It can be seen through glass walls. We didn’t visit the towers. 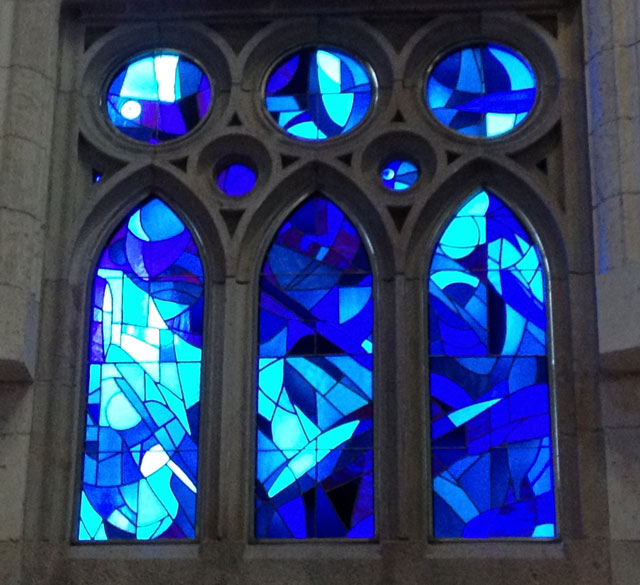 Just one of the magnificent stained glass windows

In the photos, I’ve tried to convey the impression of height and light, but it seems impossible. Even when we went back inside after looking at the two façades, we no longer had the same overwhelming impression that we had when we first went in. It’s difficult to take photos of the outside because you can’t stand back far enough. It’s a pity there isn’t an esplanade around it. There are parks across the road, but traffic in-between. 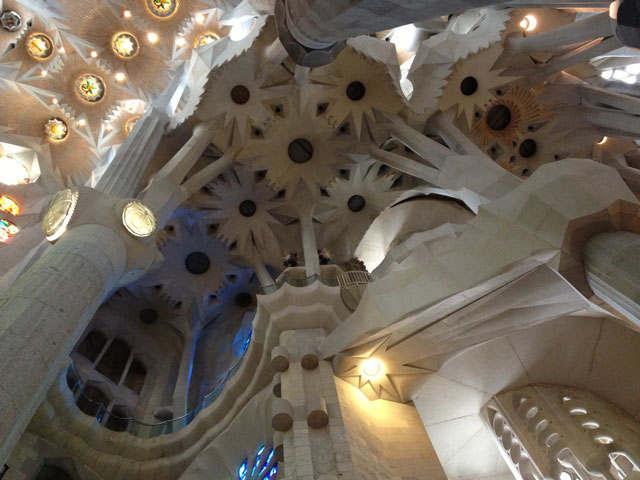 On a purely practical level, given the very long queues, it’s best to buy your ticket on-line. There are lots of different websites, all of which charge a lot extra. You need to go to the official website of the Sagrada Familia which takes you to www.ticketmaster.es. Either you print out your tickets or you go to a Caixa bank with a ServiCaixa machine. You insert the bank card you used to pay on-line, then follow the instructions starting with « Collect tickets ».  We went to the bank just opposite the very helpful tourist office next to Plaça Jaume but there are plenty of others. 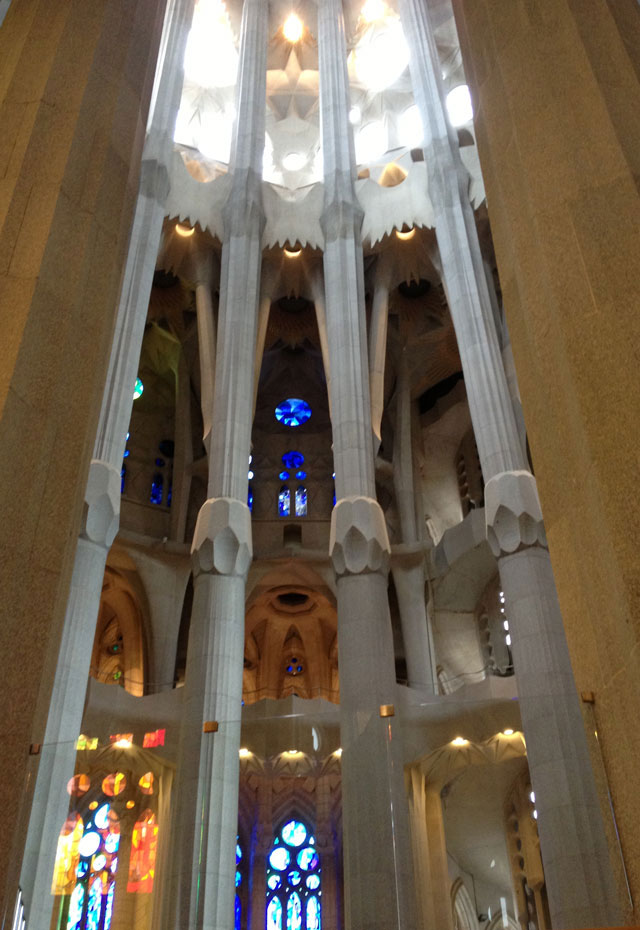 The tickets were 14.80 euro per person without the audio guide, slightly more than you pay if you queue for an hour. In retrospect, I think we should have taken the audio guides because they included the underground exhibition. We decided not to because 1 ¾ hours seemed a long time, but in fact we spent more than 2  hours there altogether. You are given a one-hour slot during which you must enter at a special gate just next to the regular ticket office and there is absolutely no queue.

Scuptures on the Passion façade

There is a queue for the toilet however but I discovered a second lot right down the far end of the underground exhibition where I could go straight in. 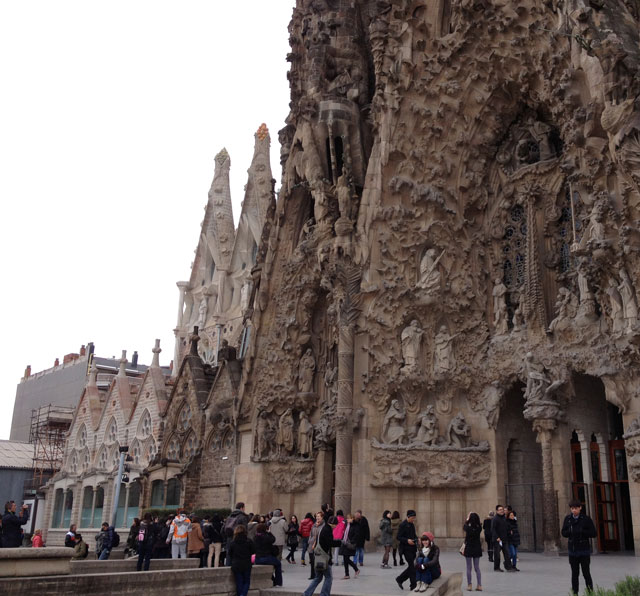 Conceptua design of the Sagrada Familia

This entry was posted in Architecture, Spain and tagged barcelona, Gaudi, Sagrada Familia. Bookmark the permalink.